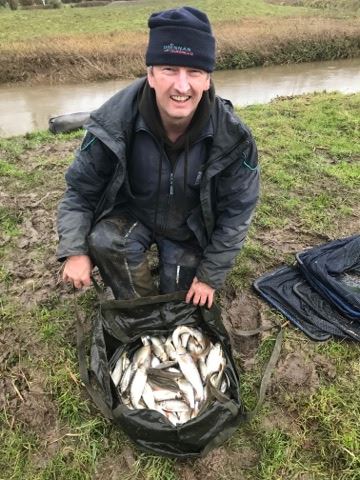 This week was the penultimate round of the V.E.S. Precision league and with Adie having a four point lead he was looking good to win the league for the second year running. Mathematically it was still feasible to catch him although he’d have to blow out big style in the two remaining rounds and I just couldn’t see it happening. I popped down to have a look at the river on Saturday and it looked perfect with a bit of pace and a tinge of colour. At Hambridge I had a walk down as far as the weir which didn’t look as good as I’d hoped it would although there was a cracking swim where the mill leat joined the main river and will definitely be worth a try at some point.

I woke up Sunday morning and it was raining although nothing too heavy but I stopped at Horlicks to have a look on my way to the draw and it still looked really good so as long as we didn’t have too much rain we should be in for a good match (famous last words!). Along with the regulars, it was nice to see Justin Charles for the first time this year. I announced the draw and Adie was first into the bucket and his drawing arm continues to be on fire as he drew last weeks winner, H1 below Hambridge. Steve ‘The Pole’ pulled out H2, Justin was on Barney’s Bend and Terry ‘The Toast’ drew 128.

With just two balls left, Harry stuck his hand in the bucket and pulled out H4 which left me with 125, normally a decent peg but with colour on it, a brilliant peg! As we left the bowling club, it was chucking it down and as we headed to Isle Brewers there was a fair bit of water about. I parked up and had a look at the river which looked spot on, Terry, Karl and Stu weren’t as impressed which prompted me, rather rashly, to bet Karl I’d catch 20lb today! My peg is just above the bridge so a nice short walk, the banks were really slippery but I got my box in place with no problems.

I set up a 0.2 gram Drennan AS1 to fish three sections to hand running the rig through and a 1 gram bodied float for holding back and also in case the river came up and I had to go across where there was some steadier water. On the side tray I had bronze and red maggots, casters and Bait-Tech Super Seed hemp. The match got underway and I started at three sections to hand with double bronze maggot on the hook, I had a gudgeon second run through then a dace before I had to use the landing net for a 10oz chublet. The next couple of fish were minnows so I switched to caster and the next fish was a good roach and it was a bite a chuck.

About ten past ten, Justin appeared behind me to ask what time we were starting as he thought we were kicking off at quarter past! I told him we’d started at ten and that I had the best part of 2lb already, so he headed back to get his match started! I carried on catching and had a brilliant first hour, putting 32 roach, dace, chublets and gudgeon in the net for probably 4-5lb. It was still chucking it down and I was soaked already as was all my kit. I was feeding casters and hemp upstream in the middle and also flicking a few across to the far side. There were obviously loads of fish in the peg and I always find it amazing that as soon as the river has some colour in it, quality roach start to show in numbers, they’re obviously there but just don’t show when the river is low and clear. 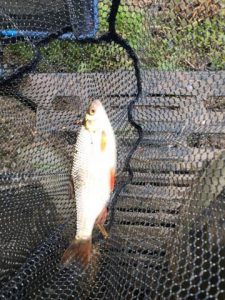 I started getting some lovely roach

After 90 minutes I was up to 48 fish for probably 7-8lb and I started to think a really big weight was on the cards but I was also concerned that the rain wasn’t letting up and if anything it was getting heavier! I had a couple more nice chublets but I’d also bumped two or three better fish and going into the third hour, it was noticeable that the flow was picking up. I started catching fish just off my keepnet but bites were slowing up, I stuck the plummet on and the swim was now six inches deeper than when I started! I deepened up and went back to fishing double bronze maggot and had another run of fish but the river was now rising at an alarming rate.

With the middle of the peg now unfishable, it was time to try across, I went over with the lighter rig, the float buried and what felt like a good roach, shook it’s head before the hook pulled out, I had a small roach next chuck but the light rig wasn’t right so I went over with the heavier float and had a nice roach quite quickly. Paul Adams turned up to see how we were getting on and I missed a good bite on caster while he was there and that turned out to be the last of the action as the river rose even more and some big branches and other debris started coming down in the flow. Terry ‘The Toast’ arrived with about an hour to go and said he’d packed up but had left his net in, he said Justin was still getting odd fish.

I gave it another half an hour before packing up, I walked up to weigh Stuart in and ‘The Perch Master’ had done it again and caught another nice stripy along with a chublet and a few bits for 1lb 9oz, his brother Karl just pipped him with 1lb 15oz from peg 124. Then we got to my peg and my 86 roach, dace, chublets and gudgeon (plus minnows) went 11lb 10oz, I paid Karl his pound although it might have been a different story if we hadn’t had all that rain and I think 30lb was possible from my peg today. 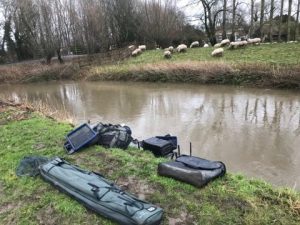 My peg at the end of the match, just slightly up and coloured! 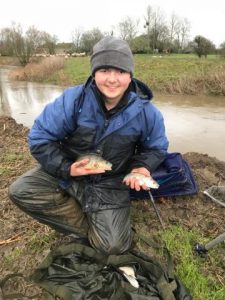 Another nice stripy for The Perch Master 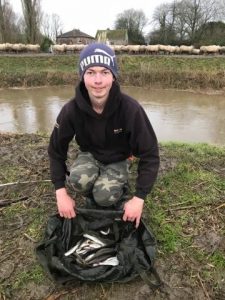 Karl earned the bragging rights over his brother this week 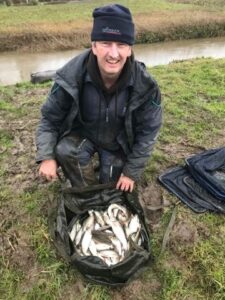 Below the bridge, Justin had 7lb 6oz from peg 126 and Terry had 3lb 12oz from 128 so I was still in the lead although I thought somebody at Hambridge might beat me as they would have had another hours fishing before all the extra water arrived. Back at results and when Adie got back he said he was top down there with 6lb 13oz and Steve P second with 3lb 14.5oz, Harry didn’t weigh but he had caught a nice perch and some bits. So I’d won and picked up £50 plus a nugget from Steve, with Adie scoring one point today he’s got one hand on the league title leaving me and Steve to battle it out for second and third.

I totally hold my hands up and say I got it wrong today and we should have fished the pond, the trouble is there’s such a fine line between a perfect river and an unfishable one, we very rarely fish the river with colour on it as it’s normally switched to the pond well in advance. It’s also looking like opportunities to fish the river next season will be few and far between anyway but more of that later.

After six matches and dropping the worst result, this is how the league looks so far,

I’ve also updated the list of framing pegs so far in the eleven matches we’ve had on the river,

We’ve had eight different winners so far with Frank Woodard, Adie Bishop and me the only anglers to win more than one match.