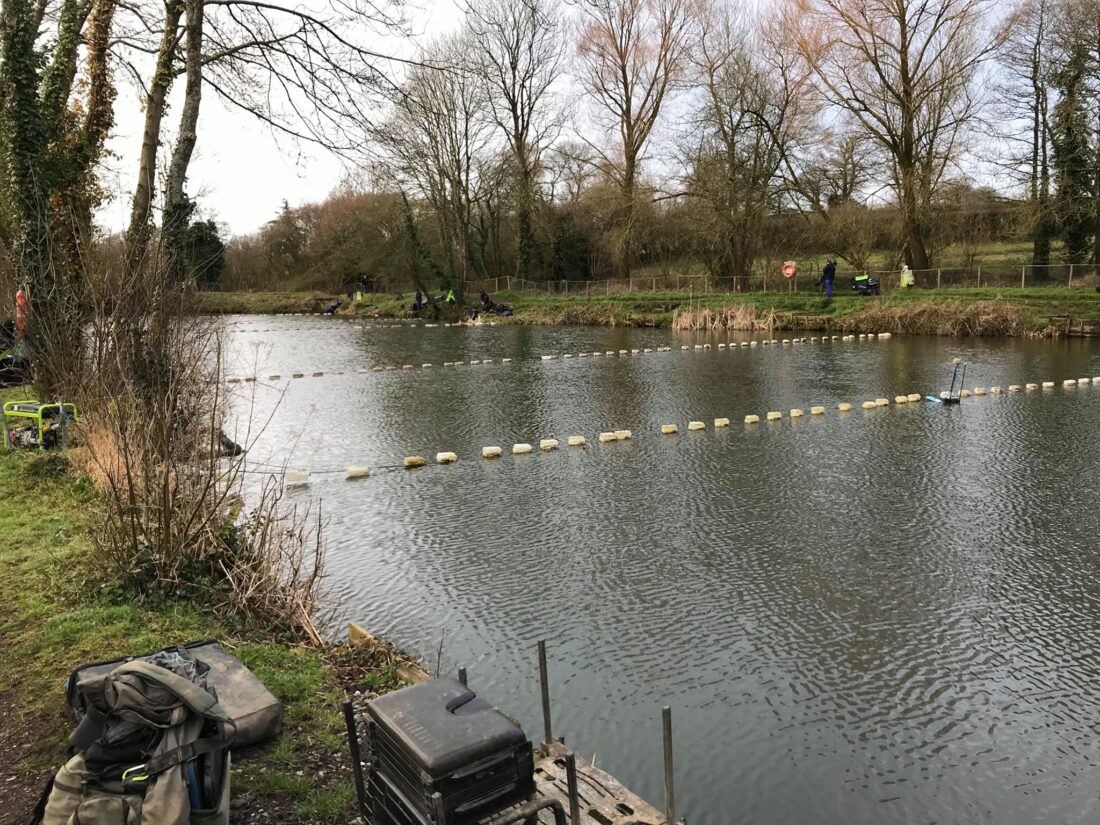 After struggling on Friday, I was hoping for better things today, also it was April Fool’s Day but we’ve got our ‘Fool’ all year round, the Tart (aka Tail End Charlie). We met at ‘Spoons for breakfast again and there was a full house fishing today including Exeter Mike who’d been climbing the walls at home after breaking his wrist. I was fishing for Picky today and the draw sequence put me on peg 14 again, as for the Tart, he was on corner peg 11 and I was pretty sure I’d be waving goodbye to another pound today.

I got to my peg and unsurprisingly it looked just as I remembered it from last week! My neighbours for the day were Carl on my left and Mike C on the right, Sith Lord Smith was opposite me on peg 7. 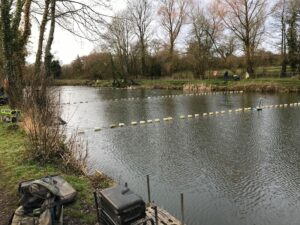 It is a different photo from last time!

I set up a Drennan 0.4 gram Carp 1 for fishing dead maggots over micros at 11.5 metres and also meat at 5 metres, a hand made pattern for fishing up the edge to my right with maggots over groundbait and after the last match, I also set up an inline dibber. On the side tray I had red maggots (alive and dead), 6mm meat, Bait-Tech Carp and Coarse 6mm pellets and micros that I’d soaked the night before plus some Special G Gold groundbait.

It was actually quite a pleasant day although some rain was forecast for later, Smithy said there were loads of carp swimming about up in the water and I thought it might fish well today. I was ready in plenty of time so walked up to see what Little Jack Horner’s peg looked like. 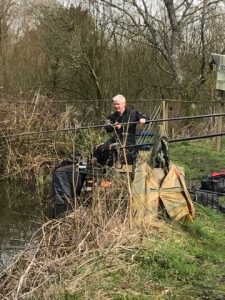 If he’s not on an end peg, Little Jack Horner is in a corner!

Les signalled the all in and I cupped in micros and dead maggots at 11.5 metres, some meat at 5 metres, three pots of loose groundbait on my inside line and then started long with the shallow rig and banded 6mm pellet, hoping for a few early fish. Much like the last match, there were loads of carp swimming about but they just didn’t want to know. I couldn’t really see the Tart but Supreme Leader Smith was keeping me updated and apparently he was already catching, Howard in peg 10 was also off the mark but after half an hour, fish were few and far between for the rest of the pond.

Squadron Leader Smith had a fish on dobbed bread a foot deep in open water, I didn’t have any with me (doh!) so tried banded double dead red maggot but with nearly an hour gone I was still blanking but no need to panic yet. Next up was the depth rig and I did miss a bite (I think) where I’d looked away for a second but then couldn’t see the float. Sergeant Smith had a couple more carp shallow and they were taking the bread but I just couldn’t get a bite on pellet or maggot.

After two hours, I still hadn’t had a fish and Bish and Bushy over on pegs 8 and 9 were in the same boat although by all accounts Little Jack Horner and Dunner on peg 12 were catching well. The banter was top class though and every time somebody got off their box to answer the call of nature, there would be cries of ‘Where did you get that, a joke shop!’

Now at this point it might seem like I’m padding this out a bit and you’d be right! It’s hard work writing about catching nothing but with the blog you get the good, the bad and ugly (who happened to be on peg 11 today!). I tried the meat line but never had a touch and then went back out shallow and after two and half hours, finally hooked a carp but straight away, something didn’t feel right and I’m sure it was foulhooked. I did start to think I might have a chance and actually got as far as unshipping some sections but then the hook pulled out!

There was the odd fish coming out on the opposite side, Les, Hoffy, Bish and Bushy all had a couple of fish and Chilly even caught a frog! It was a different story on our side though, Mike had a skimmer on the feeder but apart from pegs 11 and 12, the only person who’d caught in the high numbers was Shane with two carp on peg 17. Bizarrely I was still quite confident of catching down the edge in the last hour or so as I had three there the previous Sunday.

With two hours to go, I had my first try down the edge and missed a bite which gave me some hope, Smithy was getting odd fish and the Tart was still bagging and I didn’t even want to imagine the number of gloating texts I’d be receiving if he won his second match on the trot and his smugness would be off the charts! There was a glimmer of hope though as Dunner was now catching well and making inroads into the Tart’s lead.

Into the last sixty minutes and it had gotten really cold and it looked like rain was imminent, I had another little dip on the float and struck but instead of solid resistance, a small roach flew out of the water, I didn’t care, it was a fish and would be worth a few points for Picky, without unshipping the sections, I swung the pole round to get it over the bank in case it dropped off but of course it never made it and fell off!

Smithy and Bish both had a couple of fish from their inside lines and I still thought I might catch from mine and needed two now as Mike C had added a carp to his earlier skimmer. I won’t drag this out anymore as it was painful enough being sat there for six hours without reliving it all again, needless to say I blanked and I can’t remember the last time I didn’t catch anything in a match. More than anything I’m gutted that I let Picky down, sorry mate.

I wasn’t alone though as Carl on my left had blanked and so had Richard next to him, even Mark G on peg 20 which had won the last match didn’t weigh and from peg 13 to 20, there were just four carp caught! Just to finish off the day, it started raining as we packed up.

As always the scales started at peg 1 and Oz weighed 2lb 8oz, Exeter Mike wasn’t gagging to go fishing anymore as he blanked!, Butch had 3lb 4oz on peg 3, Chilly had 17lb 6oz (which didn’t include the frog!), Les weighed 10lb 2oz from peg 5 and Hoffy had 14lb 8oz with several of fish caught on the straight lead and bread. Smithy from the SSS (Secret Sandwich Society) did well to weigh 33lb and had fished a really tidy match, it was a pleasure to watch (and thanks for the cakes!). 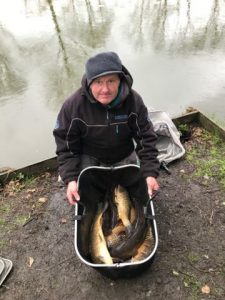 Agent Smith had 33lb from peg 7

Bish had a level 20lb and Bushy just pipped him with 21lb 8oz, Howard had 12lb 4oz from peg 10 and then it was Little Jack Horner’s turn, after two weighs his total was 71lb 8oz. Dunner was next and his first net went 34lb something and this was going to be close, he pulled his second net out and he had some lumps, the needle swung round to over 40lb to give him a total of 75lb and he’d done it, thank you Alan! 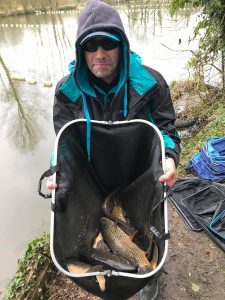 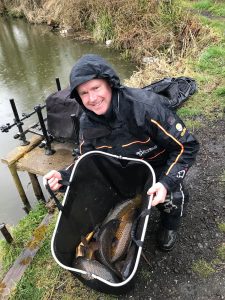 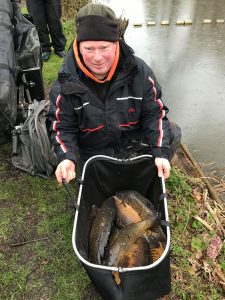 Mike C had a level 8lb and would win the section by default, Les then offered to take a photo of my three empty nets! The next person to weigh was Shane who had two nice carp for 13lb 12oz from peg 17 and the only other person to catch on our side was Geoff Young who wouldn’t win any prizes with his 6lb carp but he did have the best hat of the day! 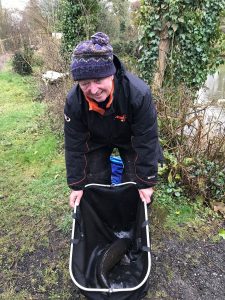 Geoff had 6lb but he had the best hat of the day! 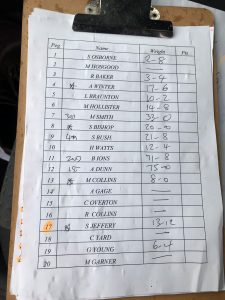 Tough going on the high numbers

So the wheel has fallen right off my wagon, it had to happen sooner or later and at the end of the day it’s just fishing, it’s not the first time I’ve blanked and certainly won’t be the last, I’m just gutted it happened when I was standing in for somebody, sorry Picky! I’m supposed to be fishing for Oz in the next match and I did ask him if he still wanted me to fish after today!

To be honest, I think if I’d have fished bread shallow like Smithy did, I might have caught a couple and I know him and the Tart have been catching loads of fish on the white stuff but as I’d done okay in the last match I couldn’t see any reason why today would be different but that’s why we love fishing, it’s addictive and frustrating but then some days it all falls into place and another day nothing you do makes a difference. Nobody will ever get it right all the time, although a certain Mr Shipp is nearly there!