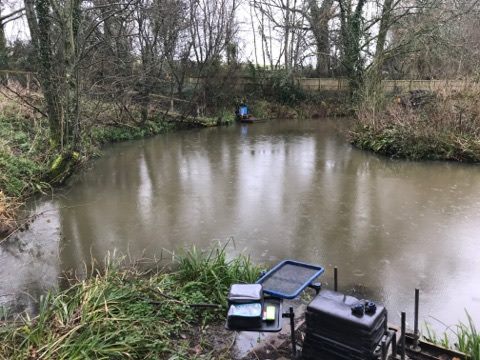 I always look forward to having a nice long weekend at Easter, especially as I normally fish a couple of matches, we were at Sadborow today and Picky asked if I’d stand in for him at Perry St on Sunday. The only downside would be having to spend two days in close proximity to the Tart, that’s more than enough for anybody!

We met at ‘Spoons and I normally really enjoy the breakfast but today there were no fried eggs and it could have been a bit hotter. The Tart’s drawing hand continues to be on fire as he even drew an end table at breakfast! Then it was time to do the draw for the day and originally there was a full house but a couple of people had dropped out so there would be two empty pegs and my money was on Tail End Charlie having one next to him! I fancied pegs 1, 4, 5, 8 or 9, the only one I didn’t really want was peg 6 and when Supreme Commander Smith admitted to having it, I felt it was safe to stick my hand in the draw bag.

My home for the day was peg 4 behind the island, opposite where I was last time and I was happy with that, it wouldn’t have been my first choice but it’s a fairly consistent peg and comfortable to fish. What about Tail End Charlie, I hear you ask? Peg 1 with nobody on peg 2, never in doubt was it! We got out the pond and as we started taking our kit to the pegs, it started raining quite hard and it was cold rain too! 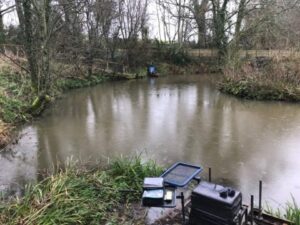 I was on peg 4 today

I had Hoff on my left on peg 5 with Butch on my right, I set up two rigs, a Drennan 0.4 gram Carp 1 for down the middle of the peg at five metres and a 0.3 gram Drennan Margin Crystal for fishing by the island, down the edge to my right at 5 metres and up towards the inlet pipe to my left at 11.5 metres, both rigs had 0.14mm bottoms with size 16 B911’s. On the side tray I had Bait-Tech 2mm Carp and Coarse Pellets which I’d soaked the night before and added some Special G Dark to, some corn to which I added a glug of ‘The Juice’ and red maggots (dead and alive). I also mixed up some Special G Dark and added dead maggots, micros and corn for the margin line.

Les got us underway and I cupped in some micros and corn by the island, the same up towards the inlet, some dead reds at 5 metres and then three pots of loose groundbait to my right. The Tart came in for some stick when straight away he’s gone out with an 18 inch deep dobbing rig with bread on the hook and was into a fish first chuck, then Butch struck into a fish and it was looking like we might be in for a good match. The Tart landed that fish went back out and had another straight away and it was solid, apparently you could see the carp swimming about and it was black with them!

I had a few little knocks on corn by the island and I got the impression there were a few fish there but no proper bites so I went up towards the inlet pipe and it was the same story, I switched to a soft pellet but that wasn’t the answer. Hoff had a carp but other than the Tart nobody was catching and it looked like it might be harder than I first thought so I put two dead reds on and went back up by the inlet. I tapped in a few micros and maggots, lowered the rig in, the float settled and then buried, bingo! It wasn’t on long though and I suspect it may have been foulhooked but at least I knew there were some fish about.

I tried by the island and after a few minutes I hooked another and had this one on longer but again it came off and this time there was a scale on the hook. By now an hour had passed and I was still blanking, the Tart had about ten carp and was running away with it as the next best on the pond was two carp and he was loving it and revelling in our misery! Did I mention it was still raining too!

I was still feeding maggots at 5 metres and cupping in some groundbait on my right hand inside line but wanted to leave those lines as long as possible before trying them. I finally got off the mark with a carp from up towards the pipe but it was a one off and I couldn’t get a bite over by the island. The Hoff was getting the odd fish, Commander Smith only had one carp and was doing some squirrel hunting to keep himself amused, Bish was struggling on peg 8, Les was catching a few but at this stage nobody was catching the Tart and Smithy was saying he was already dreading the journey home!

The freezing cold rain was making it an uncomfortable day for everyone and the Tart even stopped catching and came up to ask if I had some scissors so he could cut off the finger tips of his gloves, I offered to do it for him if he left his fingers in them! The rain was also causing other problems as several people had pole sections get stuck together and more then one section went in the pond although thankfully I think everyone got them back.

I tried the inside to my right for the first time but no indications so then it was onto the 5 metre line and I was hoping for good things. I didn’t get the response I’d hoped for but finally after ten minutes, the float sailed away and I bloody missed it!

I had another indication not long after and was hopeful that there were a few fish there but I went a further 15 minutes without a bite so tried the two longer lines again but still nothing doing. Back on the inside line and I had my second carp which was quickly followed by number three and I started to think there was still a chance of framing.

No more bites so I cupped in another pot of loose groundbait and went back on the maggot line, I had three carp in quick succession and was back in the hunt, I shouted over to Hoff to ask how he was doing and he said he had eight so I was only two behind and there were still a couple of hours to go. But then I couldn’t get a bite and Hoff started catching again, I did manage one more from up by the inlet to put me on seven but Superintendent Smith was now getting a few from his inside line and I knew my good run was coming to an end today.

The Tart had stopped catching and Les, Hoffy and Smithy were gaining ground on him fast. As we neared the end of the match, Butch had two more carp to add to the one he caught first chuck and I had two more from the 5 metre line to finish with nine carp for around 27lb. I wasn’t sorry to hear the all out as it had rained for over six hours and I was soaked and my kit was soaked.

I packed up and loaded my kit in the car before we walked round to start the weigh in with Lieutenant Smithy who said he’d clicked 54lb and he weighed 49lb odd. The Tart was saying he’d clicked 53lb but wasn’t sure he had that and reckoned he’d dropped down to third spot, yep, heard it all before. Bish had six carp and chucked back before Les had 39lb something, then we got to Tail End Charlie and after three weighs, his total was 55lb so not too far out with his clicking. 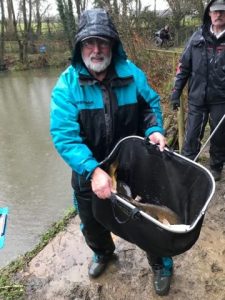 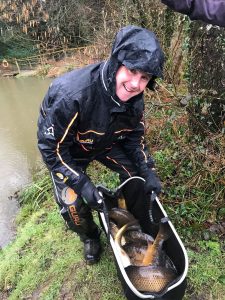 The Tart with part of his winning 55lb

Butch didn’t weigh and I chucked back as well, Hoff looked frozen and his lips had turned blue which prompted the Tart to say he reckoned Hoff’s head gasket had gone! He had a nice skimmer and a rather skinny tench for 4lb 10oz and with his two nets of carp he weighed 46lb odd for third place. 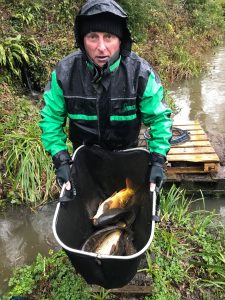 The Hoff was third with 46lb from peg 5

Back at the car Les did the results and I have to pity poor Smithy who would have to put up with hearing how awesome the Tart was today while he recounts every minute of the match all the way home!

So really close weights in the end with only three fish separating the top three and it’s a nice little venue, it would be nice to fish it when the weathers better!

I hadn’t been home long when the inevitable text came through which just read ‘Goat’, I can’t actually print my reply! We’re at Perry St on Sunday and I think there’s going to be one empty peg, what’s the betting Tail End Charlie ends up with it next door.