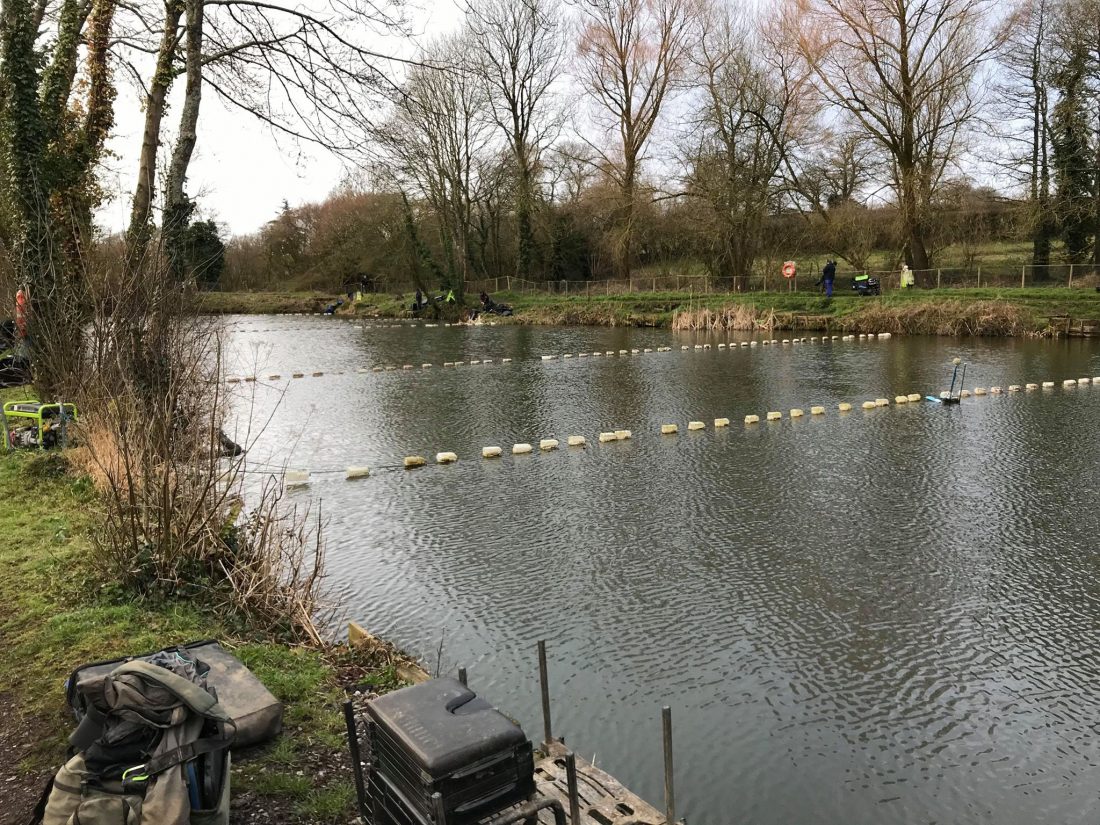 After being snowed off last week, it was rescheduled for today with people on the same pegs although as a stand-in, I was fishing for Chilly last Sunday and Exeter Mike this time around which put me on peg 14 so I hadn’t moved far! The Tart was obviously desperate to get his pound back as he’d been out three times in the week practising and had taken great delight in texting me to tell me how many fish he’d caught and how awesome he is! One of his messages confused me though when he said I could refer to him as the GOAT from now on. Not having a clue what he was on about, I stupidly asked what he meant and he replied Greatest Of All Time! I give up!

We got out the pond and all but one of the twenty pegs was taken and no prizes for who had the empty peg next to them, yep the Tart or Tail End Charlie as I’m going to call him from now on! The wind was also blowing up that end and I felt there was a good chance I’d be handing him a pound at the end of the match. 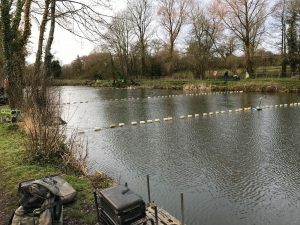 Looking up the pond from peg 14

I set up a Drennan 0.4 gram Carp 1 for fishing dead maggots over micros at 11.5 metres and also meat at 5 metres, the other rig was a hand made pattern for fishing up the edge to my right with maggots over groundbait. On the side tray I had red maggots (alive and dead), 6mm meat, Bait-Tech Carp and Coarse 2mm micros that I’d soaked the night before and some Special G Gold groundbait.

I had Butch on my left and Oz on my right with Carl and Jack opposite on pegs 7 and 8, unfortunately I could still see and hear the Tart up on his flier. Les signalled the all in and I cupped in a few micros and dead maggots on the long line followed by a few cubes of meat at 5 metres and then four balls of groundbait containing dead reds and micros on the inside line. I started at 11.5 metres with double dead reds on the hook and toss potted in (with my new Guru pots) a pinch of micros with a few maggots.

I thought it might take a while to get a bite but reigning league champion, Howard Watts was into a carp on peg 2 already, then Shane on peg 9 had one and Tart got off the mark as well. After 15 minutes I had a good bite which of course I missed, a further quarter of an hour passed and then the float slowly sunk from view and this time my grey hydro emerged on the strike, I played the carp carefully and netted a three pounder. Shane had his second and the Tart already had two or three but as yet I hadn’t seen Picky on 6, Carl on 7, Jack on 8 or Chris on 10 catch anything.

I missed another bite and where I should have been neck and neck with the Tart, I was already several fish behind after an hour. I wasn’t too disheartened though as at least I was getting indications and even with just one carp, I was doing okay with most people at our end, yet to catch. I was regularly feeding a few cubes of meat by hand and put another ball of groundbait on the inside line.

The second hour was pretty uneventful for me and those around me although it sounded like Bish up on peg 20 was bagging and could be in for a bumper payday as it was also a golden ball peg, Bushy on peg 1 had landed a couple and the Tart was still doing well. The sun had decided to put in a very welcome appearance although it was still far from shorts weather! Along with the orange thing in the sky, I started to see some black shapes in the water and I couldn’t resist lifting my deep rig out of the water and flicking it in front of some of those carp, they didn’t seem that interested but then the float went and I was into a decent fish, I just couldn’t get it’s head up and it soon became obvious it was foulhooked. After a lengthy fight, I netted a 6lb fish hooked in the fin!

With so many fish now cruising about, I set up my favourite inline dibber with a 6mm banded pellet and started pinging out a few pellets, I kept flicking the rig in front of pods of carp and they would stop and have a look but they weren’t having it. I did miss a couple of bites before finally catching my third carp but as we passed the halfway point, it was really hard work at our end with several people yet to catch a carp. It was looking like all the framers would be coming from the top end and we were fishing for the section money.

I decided to try the meat line and despite feeding it for three hours I never had a touch so then it was on to the margin line, after about 15 minutes, the float sailed away and I struck into a 4oz stone! Carl and Picky had started getting a few from their inside lines and Chris on peg 10 was now catching well although Geoff in the opposite corner on our side was still blanking.

With around two hours to go I hooked a fish on the inside line but only briefly as the hook pulled out, then Butch had a good fish on the feeder to go with one he’d had on the pole earlier and with Oz on two carp and Mark G on a carp and some skimmers, it was all very close. I was still fishing the inside and toss potting in some loose groundbait and dead maggots and then I’ve hooked a good fish and was relieved to slip the net under a nice mirror carp of 6-7lb.

No more bites so I cupped in a big pot of loose groundbait and went back to playing cops and robbers with the shallow rig and judging by all the cries of ‘despicable’, quite a few people were trying to mug/stalk carp! I gave it half an hour and did lose a fish that I only had on briefly before spending the last 45 minutes down the edge and had two more carp to finish with a flourish.

I packed up and as I took my kit back to the car I asked how the others had got on and by all accounts it had been hard for most and Les hadn’t had a bite all day! Bish said he thought he had fourteen and the Tart and Chris were both admitting to ten (although the Tart said it might be eleven!) and then there were quite a few people with between five and seven carp.

The weigh in started with Bushy on peg 1 and he had 23lb 6oz, Howard weighed 17lb 8oz and then the Tart said he’d clicked 33lb and to be fair he weighed 36lb 8oz so not too far off, I conceded my pound. Mike Collins had 16lb 4oz on the feeder from peg 5 and then Picky had 18lb 10oz and there were quite a few close weights. 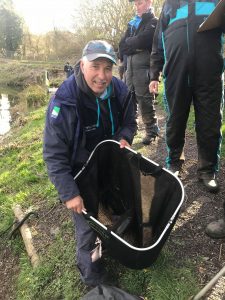 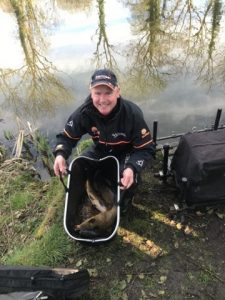 I asked the Tart to give me his smuggest look and it wasn’t a bad effort! 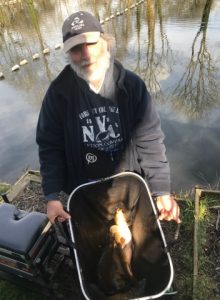 Carl had 25lb 14oz from peg 7, young Jack had two carp for 8lb 6oz from peg 8 and Shane had 27lb 4oz from peg 9. Last on that side was Yardie in peg 10 and he had ten carp but they were squeakers and went 27lb. Geoff on peg 11 had avoided a blank with a roach but he chucked it back without weighing. Mark weighed 11lb from peg 12 and Oz had 9lb next door, then it was my turn and I was hoping I’d done enough to win the section but was surprised when Chilly called it at 29lb 2oz and I’d actually gone into second place! 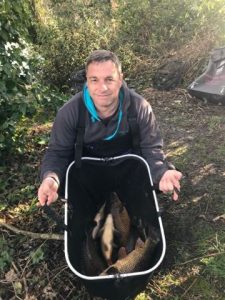 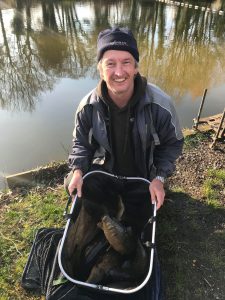 Butch had 9lb 10oz and then Chilly had 3lb 12oz on peg 16, Les hadn’t caught, the Hoff weighed 10lb and then Wing Commander Smith had 19lb 14oz from peg 19 (and this weeks cakes were Chelsea buns!). Last but not least was Bish and after three weighs, his total was 61lb 14oz for a comfortable win and a bumper golden ball payday. 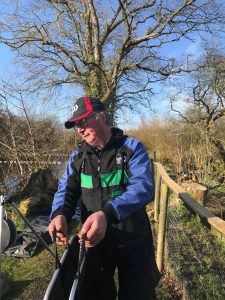 Chilly was doing the weigh in 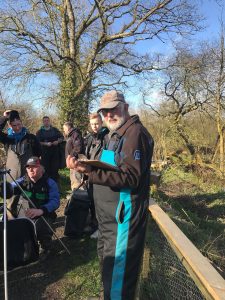 Les didn’t look too impressed when the Tart took his photo! 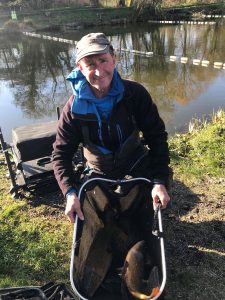 Back at the cars, Les did the results starting with the section winners, Carl, Yardie and Smithy, Shane was fourth, I was third and had another nice pick up of £70, the Tart was second and Bish went home with a big fat wallet. 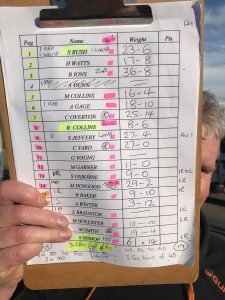 Todays weighboard, you can only see a bit of the Tart’s face but you just know he’s being smug!

Not long after I got home, I received a text from that dreaded number and it just said ‘Remember the goat’!

It’s Easter next week, so I’m fishing Sadborow on Friday and Perry St on the Sunday, come back to see how I get on, will Tail End Charlie draw another end peg? Who will win the next pound? What cakes will Smithy bring?

Also I will try and get hold of the league positions to put on here.

Check Out – What I thought of The Big One