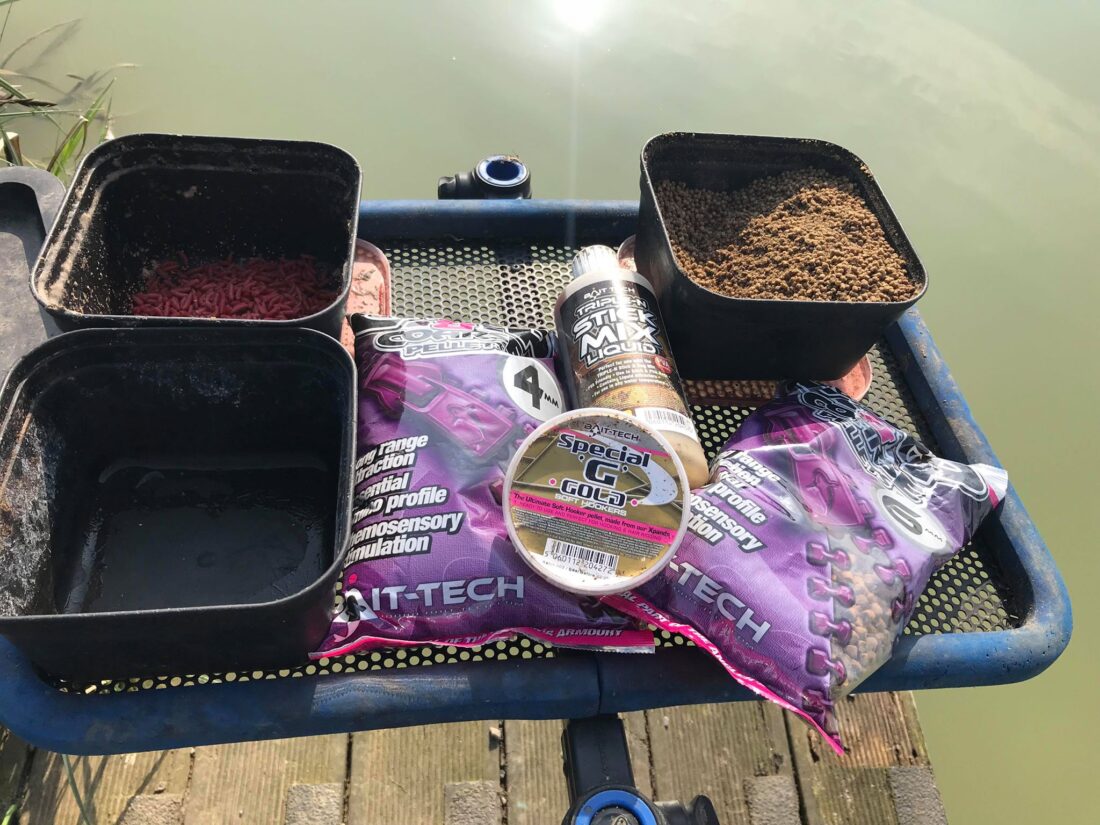 I couldn’t fish this Sunday as I was going to one of my favourite bands, Propagandhi, in Bristol but I still needed my fishing fix so decided to book in and fish the Saturday open at Todber Manor. I’d really enjoyed it when I fished it last year and I’ll try and fish it a bit more this summer. Steve P was fishing today as he hadn’t been out for ages so I met him at Cartgate for breakfast and then he followed me to Todber.

We got to the venue in good time and as we pulled into the car park, it was already really busy and after paying our pools and getting a coffee, it was really nice to have a chat with Nicky Collins who I haven’t seen since the Langport League days. John Candy announced the draw and I when I opened my yellow ticket I saw peg 48 Hill View staring back at me, a proper bung hole! I was the end peg on the spit and Steve was behind me on peg 52 with Nicky on his right and Alan Oram on peg 50. 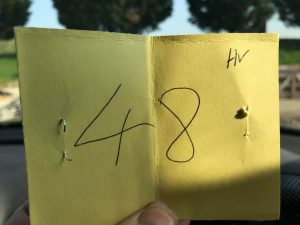 It was already a glorious sunny day and there were fish topping everywhere. I set up a Drennan 0.4 gram Carp 1 for fishing corn at top two plus two straight out and another rig featuring a hand made pattern for fishing the inside up towards the point at 8.5 metres and with all the fish moving about, I couldn’t resist setting up my favourite dibber. On the side tray I had corn, dead maggots, Bait-Tech 4mm and 6mm Carp and Coarse pellets plus some softened micros that I’d added some Special G Dark to. 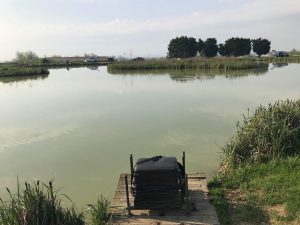 It was a glorious day 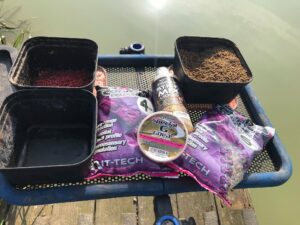 On the whistle I cupped in some micros, dead reds and corn at 5 metres plus the same at 8.5 metres up the edge to my right before starting with a 4mm expander on the short line. I gave it about ten minutes but never had an indication and the guy on my left was into fish straight away on the feeder and I had to try something else. I really fancied having a go shallow so picked up my faithful dibber and banded a 6mm pellet before shipping out to 11.5 metres and started regularly firing out a few 6mm’s while lifting and dropping the rig.

It didn’t take long for the float to bury and I was soon landing a nice 5lb mirror, there were obviously a few fish there as I had another about 4lb next chuck and after an hour I had ten carp between 1lb and 6lb for around 25lb or so. There’s a net limit of 66lb so I reasoned I’d put twenty carp in a net before starting another. Freddy Roberts over on 56 was also bagging shallow and everywhere I looked there was elastic streaming from pole tips or rods bent into fish, it was fishing it’s head off!

The second hour started well for me with four fish in fifteen minutes and I was bagging but then I hooked a fish that was obviously foulhooked and ran me ragged, I got it within netting range several times and I could see it was hooked in the bum which caused me no end of problems trying to reverse it into the net. It’s always fifty-fifty with foulhooked fish and I was just starting to think I had a chance when the hook pulled and as I’d spent ages faffing about, my catch rate suffered although I still had another ten fish in hour two.

I was still getting some decent carp along with smaller ones and the odd carissio and then I’ve hooked a proper lump, I had it on for ages and when it surfaced it was a big mirror at least 10-12lb and I was pretty much in control with the fish not really doing a lot and then the hook pulled out of that one as well, gutted and just knew that fish was going to cost me. I was up to 29 fish after three hours, the bloke on my left was switching between the feeder, the short pole and fishing shallow and catching a few on all three methods.

The wind got up and started to make presentation a bit awkward so I started to feed 4mm’s by hand on my 5 metre line in case it got any worse. I noticed Freddy had switched to fishing his inside line as he was struggling to hold the pole and feed in the wind. Also every time I looked behind me to ship my pole back, the chap called Rocky on peg 49 was into a fish. I honestly had no clue as to how I was doing, I was catching well and felt I was doing better than the anglers I could see on my left but the blokes behind and on the opposite bank all looked like they were bagging and obviously there were the anglers on Ash and Homeground lakes as well.

I kept expecting sport to slow but the bites kept coming and although not crazy it was steady fishing and after four hours I was up to 39 fish and at this rate I knew I’d beat my heaviest match weight of 121lb which I caught at Coking Farm years ago. During the day I had a several hair rigs snap in the landing net and changed to a smaller meshed net and it didn’t happen again so another little lesson learnt as it probably cost me ten minutes during the day. I also kept thinking about trying my other lines but I’m always loathed to change when I’m catching and with the inside line I could also envisage problems with big fish going round the end of the point!

Going into the last couple of hours, I started catching some big 2-3lb carissio and they don’t put up much of a fight so my catch rate improved and I was up to 52 fish with an hour to go. I started missing quite a few bites which I think were probably carissio and I did bump a couple of fish including one with five minutes to go which resulted in the elastic hanging out of my pole tip so in my haste to sort it out I flung the pole back and ended up with a right birds nest wrapped around the elastic, I eventually got it sorted just as the whistle went to end the match! I should have just picked up another rig for the last five minutes (another little lesson!), my clicker was reading 66 fish but I had no idea what weight I had as I was in uncharted territory!

I packed up and took some of my kit back to the car and could see John Candy already starting the weigh in on the other side, as the scales got closer, I had a look at the weigh board and the top weight so far was 121lb odd and I hoped I had a little more than that. My second and third nets went around 90lb between them and then I struggled to lift my first net out, John called it at 65lb to give me a total of 155lb 14oz and my new biggest match weight by some way!

Then it was Rocky’s turn and after all his nets were weighed, his total was 156lb 6oz (ouch!), Allan Oram was next and he said he’d had a bite every chuck but had a lot of small fish, after several weighs and going over in one net his total was 177lb 5oz. Steve P didn’t weigh but had caught some nice carp and enjoyed himself, then Nicky had a lovely net of silvers for 42lb 12oz – what a venue. 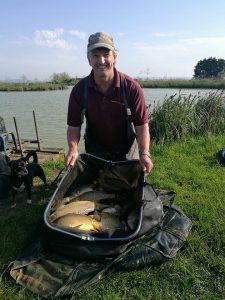 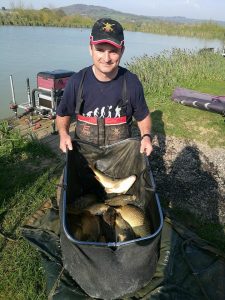 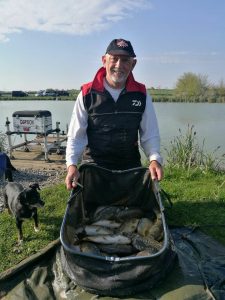 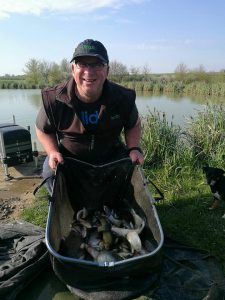 Back at the results, I was hoping I’d done enough to frame but then I heard there were a couple of 180lb plus weights on Homeground and also Dave Chidzoy had 163lb on peg 58 so I won my section and picked up £35. There were also some huge weights of silvers, with Mark Harper setting a new match record of 89lb 4oz which didn’t last long as Dave Roper had 89lb 8oz of bream and skimmers from peg 84 on Homeground! 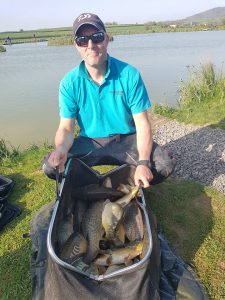 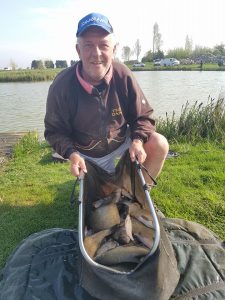 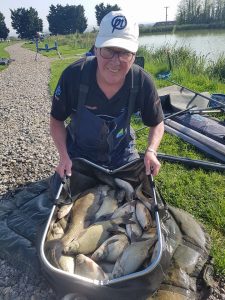 Mark Harper also had a lovely net of silvers, his weighed 89lb 4oz* 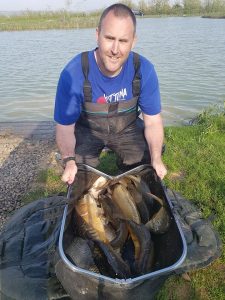 Dave Chidzoy was fourth with 163lb* 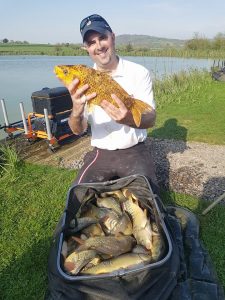 Ash had 134lb which included this colourful koi* 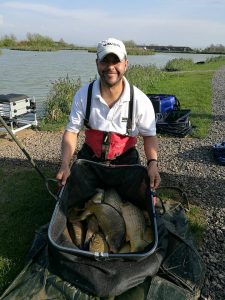 I really enjoyed the day, caught loads of fish and won some money but there were a few things I could have done better/differently and to be honest third place was achievable but I felt I fished a half tidy match today, I only actually lost a couple of fish and bumped two or three so apart from a few little things, I wasn’t a million miles away (obviously it helps to draw a flier but you can’t win off bad pegs!). 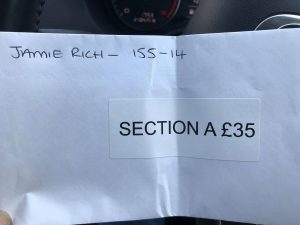 No matches for a couple of weeks as I’m off to Thailand for three weeks and I’ve got some fishing booked at a different venue so hopefully I’ll post some photos on the blogs Facebook page. I’ll still aim to publish some posts on here while I’m away and I’ve got another archives post ready to go so please check back on a regular basis. 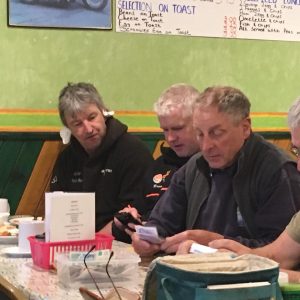 Picky sent me this great photo from the other week when I deployed my anti Tart protection devices at breakfast.