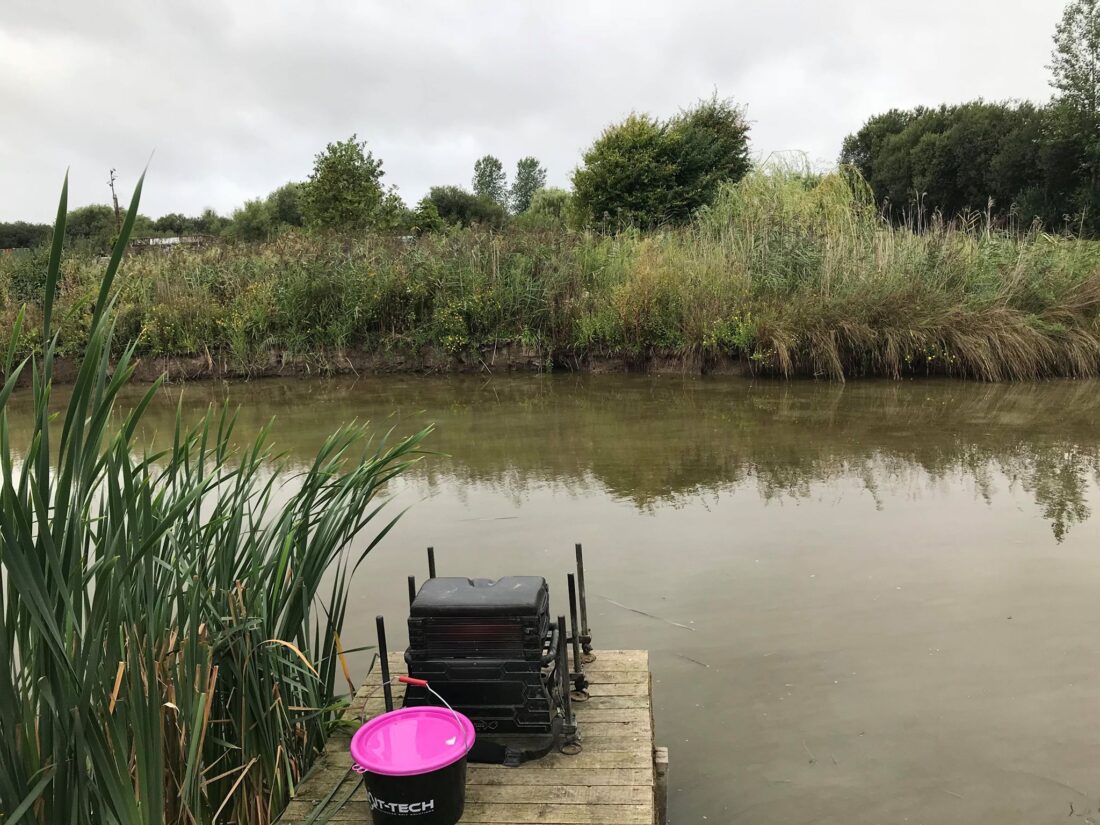 For my second match of the weekend it was back to Summerhayes and another match on Longs, on Bank Holidays, Pete always splits the pools money in half and pays the same to carp and silvers which I think is a great idea. Jess ‘Zooner’ Jordon phoned me yesterday to see if I wanted to meet him at the Toby for breakfast and very nice it was too.

Fuelled up and raring to go we then headed to Bridgy, there was a good turnout of 19 anglers including Jacko who I hadn’t seen for a while and it was nice to see Dave Bull fishing as well. As we waited for the draw I was joking with Jess about him having the last ball in the bucket and not being very happy if I draw crap and the last ball is peg 36 or something (you can probably guess what’s coming!). After a coffee, Pete announced the draw and as the bucket started doing the rounds, there were the usual grins and grimaces as people looked at their peg numbers.

The best silvers areas at the moment seem to be pegs 12 and 13, 17-20 or anywhere in the 30’s so it was no surprise to see Glynn and Ray Wickham draw 12 and 13 and then Jeff pulled out peg 19, these boys are certainly drawing well at the moment, Roger Russell was on 32 which was also spot on and it was the golden peg so he had a good chance of a bumper payday. So with only two balls left in the bucket, it was time for me and Jess to draw, would my prophecy come true? I grabbed one and as I opened my fingers I could see the number 10 looking back at me – bugger! I knew my bad run was set to continue, Roger and Glynn asked what I had and when I told them they pulled the sort of face you pull when you realise you’ve trodden in something unpleasant!

As for Jess, as he pulled his hand out of the bucket, he slowly opened his fingers to reveal the number 3 and then the number 5, another great silvers peg and I was nearly right with my earlier prediction! Trying to be positive, I did have 17lb of skimmers off my peg a few weeks back (before the pond was two foot down) and I had empty pegs either side but being realistic with Glynn, Ray, Roger and Jess all really good silvers anglers on great silvers pegs, I was clutching at straws!

Yardie was on 36 and would be fishing for carp and Glenn was on 40, I got to my peg and thought I had loads of room with nobody between me and Glenn (9 pegs!) but a guy arrived and set up on 8. Despite loads of rain yesterday it didn’t look to have made any difference to the level of the pond and if anything it looked lower than last week! 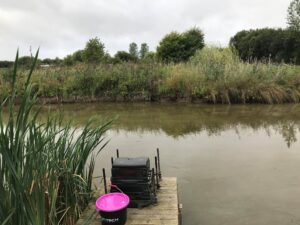 I plumbed up and had eighteen inches at top two and it was the same all the way across until you got to 10 metres where it shallowed up! I set up the usual rigs, a 0.3 gram NG Mini Gimp to fish top two left, right and straight out and also top two plus one and one of Smithy’s wire stemmed floats to fish top two plus two straight out and also at the same distance angled to my left. On my side tray I had Bait-Tech 2mm Carp and Coarse micros that I’d soaked the night before plus 4mm Xpands for the hook with a pot of Special G Gold soft pellets as a change bait and some Bait-Tech ‘The Juice’ and Special G Green groundbait I’d mixed the night before.

On the whistle, I cupped in a ball of groundbait on the top two line, another at top two plus one and then one at top two plus two angled to my left, the other lines I would feed as and when I fished them. I started at top two to my right and toss potted in a few micros, I had to wait a little while for my first bite which of course was a carp and I was already starting to get a feel for how this match was going to go and we were only five minutes into it!

I tried to the left but no indications and I was soon trying over the groundbait for the first time, after a short while the float flew under and the strike resulted in pound skimmer flying out of the water, I netted it safely and was off the mark. Next chuck I hooked another of 8oz or so, again it was a leaper and Glynn shouted down ‘Not another one!’ but it jumped again and this time it came off! I’ve gone in again and straight away, the float went and this time it was a hybrid of a pound or so, was I on a shedful? was I going to empty it? would I need a wheelbarrow for all the pounds I would be collecting?

Umm, no was the answer, for the remainder of the first hour, I did bump what felt like a decent fish but other than that, not a lot happened. Glynn landed a couple of decent skimmers which he took great delight in showing me (where’s the fish fairy when you need it?) and the chap on my right was getting quite a few carp. I put another ball of groundbait in on all three lines before trying the top two plus two line and just toss potting in a few micros, first bite was a carp so I moved to the other top two plus two line over the groundbait, float goes under, carp tears off and either comes off or I land it after much faffing about and this sequence of events repeated itself many times over the next couple of hours!

Glynn was still getting the odd skimmer and also had his usual 1.5lb eel to boost his weight, he phoned Jess who said he was struggling and only had a few skimmers. I was still trickling feed in on my top two plus one line but would leave it until the last couple of hours so with nothing but carp on any of my longer lines it was back on the top two line. I had a bite which I missed but then foulhooked a big carp which towed me all over the swim, eventually the hooklength gave way and the rig flew back at a rate of knots into the reeds on my left.

I untangled the rig from the vegetation and on closer inspection, there was no way I was ever using that float again! By now there were only two hours left (although if felt like I’d been there for days!) so it was time to try the carefully nurtured top two plus one line, I actually thought there might be some skimmers there as some smaller bubbles were coming up but I wasn’t overly surprised when the next bite resulted in yet another pond pig intent on smashing up my rig! This happened a couple more times and that was enough of that. 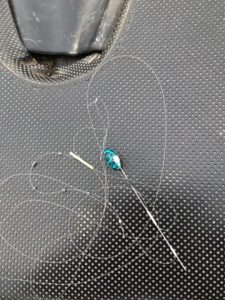 Nothing a blob of superglue won’t sort out!

I cupped in another ball of groundbait on all three lines and then got another rig out to fish the top two line. I christened my new rig with a carp (surprise, surprise!) but then the next fish was a decent skimmer, then another carp which was followed by decent skimbob and I started to think I might get a few but it didn’t happen. In amongst the carp I had a little blade and one more decent skimmer but I was spending more time playing carp than anything else (much to Glynn’s amusement!). I had one carp tear off and it was going along the far bank, bearing in mind I was only using my top kit, so everything was under a lot of pressure and then the hook pulled, the rig came flying back at a hundred miles an hour and wrapped round the pole tip and when I went to untangle it, the tip of the float had actually speared the toss pot!

I finally sorted that mess out and as I dropped the rig back in, a carp nailed the pellet on the drop and after several minutes it came off just as Pete signalled the all out and I have to say I wasn’t disappointed. I packed up and paid Glynn yet another pound before taking my kit back to the car and then going to watch the weigh in. Jim Jenner had 65lb 6oz on peg 38, then Chris ‘Yardie’ Whitham put 126lb 3oz of carp on the scales from peg 36, well done mate. Jess had struggled on 35 to weigh 6lb 14oz but at least got his pound back from yesterday. 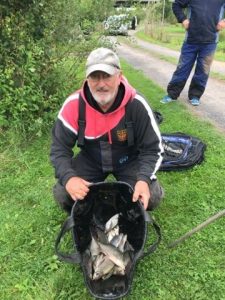 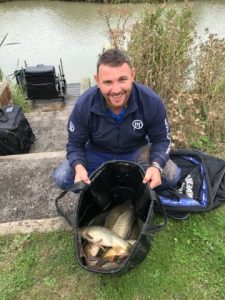 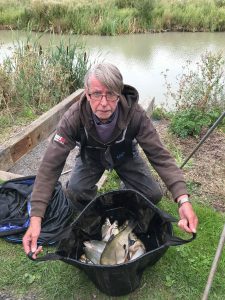 Roger had some big skimmers for 11lb 1oz 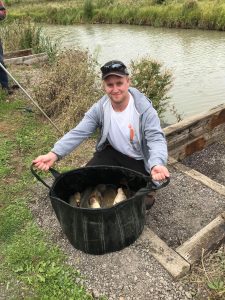 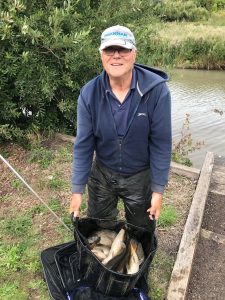 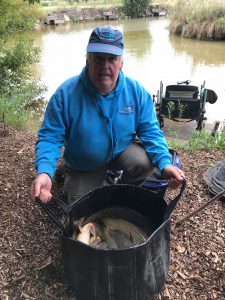 Jeff Sparkes had a nice net of silvers on 19  including a decent eel and a nice tench to weigh 9lb 15oz and he also took another pound off me (not that he mentions it much!). Chris Welch had 48lb of carp on peg 17 and then Gareth Lennox weighed 92lb 4oz from peg 15. Ray Wickham had 5lb 5oz of skimmers on peg 13 but had lost quite a few and then we came to Glynn, when he pulled his net out it was obviously going to be close and the digital display settled on 11lb 9oz which meant for the second week running only ounces stopped the golden ball from going! 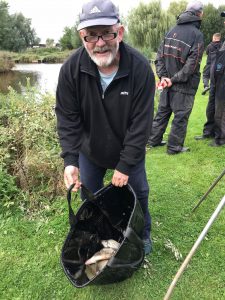 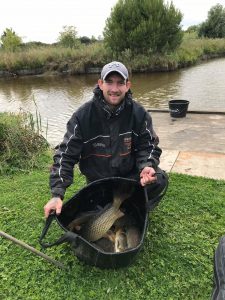 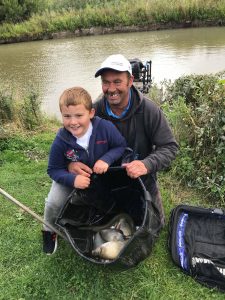 I didn’t weigh my carp and my five skimmers and a hybrid went 4lb 6oz which was disappointing as I had half of that with two fish in the first thirty minutes! Chris Morris on peg 8 had 68lb 1oz and then Glenn C on peg 40 didn’t weigh. 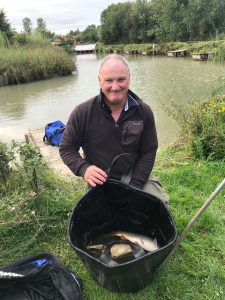 Back at the results and Yardie was called out as the carp winner with Bill second and Gareth third and Glynn won the silvers with Roger second and Jeff third.

Another really disappointing day for me today and I just can’t seem to get near the decent silvers pegs, I’ve fished 8 matches on Longs this year and apart from pegs 31 and 36 I’ve been on pegs 2, 9, 10 (twice), 15 and 26, new drawing hand required!