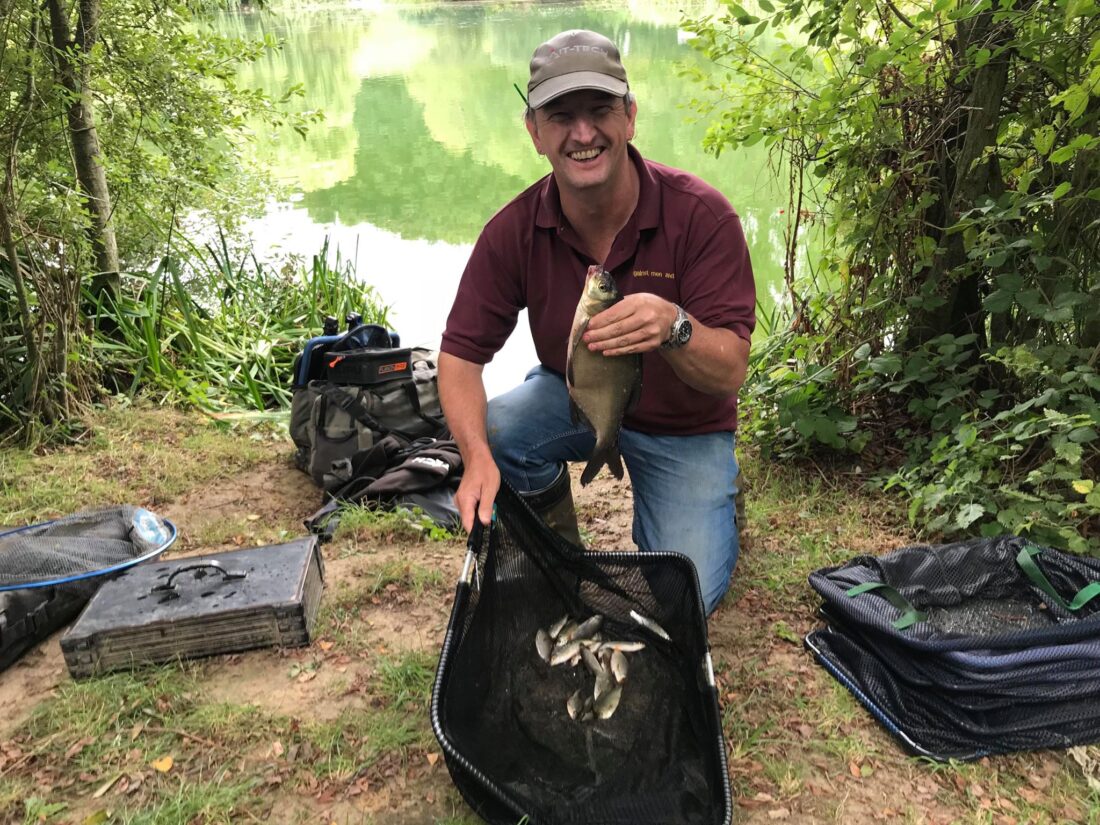 During the heat wave and with the pond really low, two of the league matches were postponed so with one rescheduled for this week, I booked in as I’d enjoyed the last match. At the draw there were a few different faces from last week, it was lovely to see Paul Homewood and Terry ‘The Toast’ Morgan again and Dave ‘Dumbo’ Phillips was fishing his first match with the club since he was a junior!

After another excellent brekkie, it was time for the draw and I didn’t really mind where I drew although I wouldn’t have minded having a crack at 19 or 20 which have been consistent pegs and I really like pegs 13 and 14 on the bottom bank. I stuck my hand in the bucket and was delighted to see I was on peg 2, it’s the peg that has broken the match record twice, it wins loads of matches and although it has gone off the boil a little this year, I really fancied it. 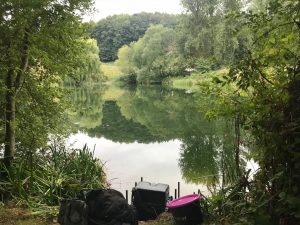 I was looking forward to this…..

Steve P was next door on peg 1, another peg that has done some big weights in the past but hasn’t been doing it this year and Nicky Collins was on 24, another bush peg that can be a bit hero or zero and it would be interesting to see how he got on as he normally fishes for roach. I did feel sorry for John Dursley on peg 3 as the peg was almost unfishable with a bank of lilies right across the swim, he said he’d give it an hour or so and see how he was doing.

Fieldy was on peg 21 and had forgotten his hat so was trying out alternatives in case the sun came out later! Frank was on 20 which had done well last week and Dumbo was on 19, the only other angler I could see was Paul down on 14. 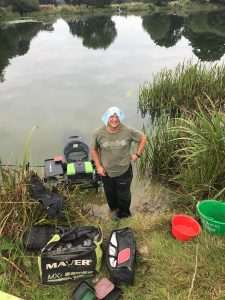 I was going to fish for skimmers again and had plenty of bait with me, I’d mixed up some Pro Natural Dark, Pro Natural Bream and Special G Gold the night before plus I had two pints of casters, half a pint of red maggots and some dead reds, two tins of corn, and a pint of hemp.

I set up two rigs for today, a 4 x 16 Preston Chianti to fish just off the tree to my right at 8.5 metres and then 11.5 metres straight out, both lines had the same depth and a 0.5 gram Drennan Roach for 10 metres straight out. It was a nice day, fairly overcast with no rain expected although the pond was flat calm which wasn’t ideal for bream and skimmers.

Nick tooted on his whistle and got us underway at 10:25, I cupped in a single ball of groundbait at 10 metres before potting in three balls, packed with dead reds, casters and corn, on my two bream/skimmer lines and followed these with a pot of dead reds, casters, corn and hemp before starting with a single caster on my roach line.

Fieldy was catching straight away on his favoured short pole to hand approach and probably had half a dozen fish while I was still feeding! Frank was doing the same and also catching well, I shipped out and the float sailed away as a small roach took the caster, more followed and it was a bite a chuck, I also had a nice 2oz rudd and a little skimmer which is a great sign as they are obviously breeding.

After half an hour, I had 20 fish for around a pound but then saw Paul net a decent skimmer down on the bottom bank and if I’m honest I was dying to try my big fish lines. I went out over the 8.5 metre line with a grain of corn and was expecting to catch quite quickly but it didn’t happen, I cupped in another ball of groundbait and a pot of casters, dead reds, corn and hemp and swapped to the 11.5 metre line. I started getting a few indications but I think it was probably roach pushing the corn around.

Graham was still catching small fish and Frank was now on the feeder but hadn’t caught on it yet. I had a couple of what looked like proper bites but failed to connect and I’m not sure skimmers were responsible. I’d seen Paul net a couple more fish and apparently Jake on peg 6 was catching well too so I felt sure it would only be a matter of time before I started getting a few.

I was swapping between my two big fish lines and keeping the feed going in but after another hour or so I hadn’t added anything else to my keepnet and with Paul and Jake catching skimmers and Fieldy and Nicky catching roach it was now big fish or bust as I was already too far behind the small fish anglers to catch up and then John D had a proper bream followed by a skimmer and it was pointless me doing anything else now.

I missed a few more bites so tried single and double caster but that just resulted in two roach so it was back on the corn and hope the skimmers arrived soon. Frank was swapping between the feeder and the pole and hadn’t caught a skimmer yet either, I shouted up to ask how Steve P was doing and although he said he hadn’t caught any skimmers, I thought he must be catching quite well as he was unusually quiet!

With around an hour and a half left, I was on the 8.5 metre line when the float dipped before lifting up, I struck and a pleasing amount of elastic came out, I shipped back gently and netted a nice skimmer of around a pound and a quarter, I was hoping they’d arrived and I’d get a few more but I never had another fish!

I packed up and managed to get photos of Nicky and Fieldy in the other section before the scales started weighing on our side. Nicky had almost an identical net of fish to last week when he weighed 10lb 6oz and Graham had 202 fish for 7lb 8oz. 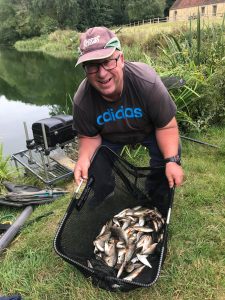 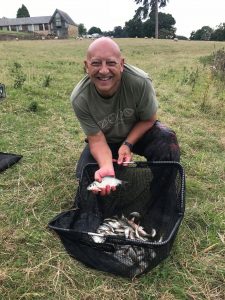 Steve P was first to weigh in our section and had 4lb 11oz so I handed over the pound he’d given me this morning, my 23 fish went a lowly 2lb 5oz and then John D had done well to weigh 6lb 14oz from peg 3 although a near 5lb bream helps! Nick Payne had 3oz from peg 4 (and didn’t want a photo!) before Jake had a lovely net of bream and skimmers weighing 22lb 12oz from peg 6, he caught on corn on the pole and feeder. Gordon had a level 2lb and then young Stu had loads of fish for 6lb 2oz from peg 8. 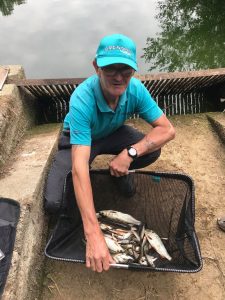 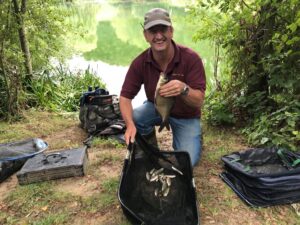 I had a disappointing day to only weigh 2lb 5oz 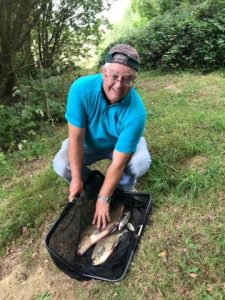 John had a big bream, a skimmer and a few bits for 6lb 14oz from peg 3 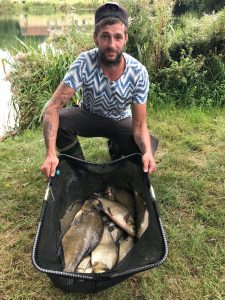 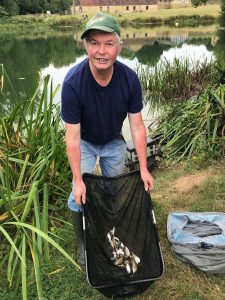 Gordon had 2lb from peg 7 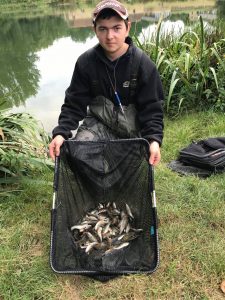 In the other section, Terry ‘The Toast’ had 3lb 8oz from peg 9 and then Paul pulled his net out and it was obviously going to be close, the needle settled on 21lb 6oz for second place, a lovely net of skimmers caught on corn and worm on the pole at 11 metres. Dave had a level 1lb from peg 19 and Frank didn’t bother weighing. 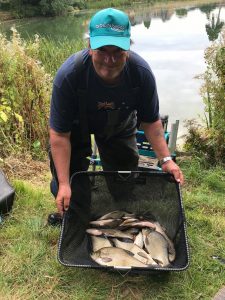 A really frustrating day for me, in hindsight (which is a wonderful thing!), I should have just fished caster all day and I’d probably have done enough to win the section but last week 7-8lb wouldn’t have got you anywhere! The pond is certainly an intriguing and ever changing venue, the quality roach and rudd don’t seem to be there in the numbers they were a few years back and we’re not getting the 30lb and even 40lb winning weights of the last couple of years. There’s obviously still a good head of skimmers but apart from Jake and Paul, the only people to catch skimmers or bream were John and me. Paul had loads of room today which is always a bonus and I reckon peg 13 would have done well if it had been in.

Perhaps I should have fished the feeder but Frank tried it without any luck and also Paul caught his skimmers on the pole and Jake had several of his on it. Maybe if I’d fished caster all day, I might have caught the odd skimmer on it but I’ll never know now and that’s what makes fishing such a great sport, you never know what’s going to happen and it’s different every week!

I’ve got the league table off Nick and the top five after eight matches looks like this (number of matches fished in brackets),