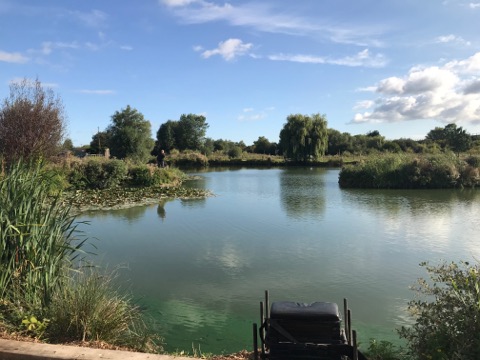 Something a bit different today, the specimen lake at Summerhayes used to be called Perch Pit but it also held a decent head of silvers and occasionally on a rover match somebody would pick a swim there, I remember Bruce Hunt having just shy of 20lb which included loads of little roach and a decent crucian. Fast forward a couple of years and Perch Pit and Lily Lake were joined together to create a new lake called Big 8. Regular readers of the blog will know Lily Lake and me just didn’t get on, so I shed no tears at it’s demise!

A few weeks back, Steve Jackson and Roger Russell pleasure fished Big 8 with Jacko catching 27lb of decent skimmers and Roger had 7lb odd, these fish were moved to Sellicks and it was decided to have a little knock up to see what else we could catch and move the fish to the match lakes. Also to try and concentrate peoples efforts on the skimmers rather than the roach and perch, the payout would be on skimmers and hybrids only. I was really looking forward to it as I enjoy fishing new venues and the first bite on a new water is always exciting. It also looked like it was going to be a nice day weather wise and a days fishing is always better than going to work whatever the outcome!

I met Scotty at the Toby in Taunton for brekkie before heading to Bridgy and with the usual Friday traffic we were a couple of minutes late. I paid Roger my £20 pools and as Pete wasn’t charging us a pegging fee for today, there was a nice payout of £110 for first place and £70 for second, not bad for a nine pegger! I wanted to draw a peg on the old Perch Pit but was a bit gutted when I pulled out peg 4 which put me on the far bank of what used to be Lily, I can’t seem to get away from that poxy lake, even when it technically doesn’t exist anymore!

There were five of us over there, Alvin on peg 7, Scott on 6, John Barker on 5, me and then Rob Birch on the point which used to be the causeway between the two lakes and that left four of them around what used to be Perch. Jacko was on the bottom bank with Roger on peg 9 on the far bank and Jeff Sparkes and Bill Hopping on pegs 1 and 2. You can drive right behind the pegs now and as the swims are designed for bivvies, it was probably the biggest peg I’ve ever been in! The wind was blowing down the lake towards Jacko and Alvin which wouldn’t do them any harm. 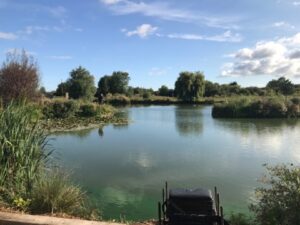 My first time on Big 8

Plumbing up I was a bit concerned to find it was only about two foot deep at 5 metres and it was the same right out to 11.5 metres. I set up a 0.2 gram NG Mini Gimp and a 4 x 10 MW F1 Slim and on the side tray I had Bait-Tech Sticky Micros that I’d soaked the night before, 4mm Xpands for the hook, dead reds and I’d mixed up some Bait-Tech ‘The Juice’ and Special G Green groundbait.

Jacko got off to a flying start landing several decent skimmers and it looked like Alvin was catching well too. By now I’d tried all three of my lines and still only had that single roach to show for my efforts and I was fearing the worst already. I saw Rob strike into a fish and judging by the amount of elastic out, it was a decent fish, he shipped back carefully but a nice perch of around a pound wasn’t the result he’d hoped for.

With nearly two hours gone, I fed my lines again and popped up to see how Scotty was doing, he said he’d had three skimmers early on but now was only catching roach, he said Alvin was getting some good fish and Jacko was bagging. I went back to my peg and had a couple of small roach and a rudd on double dead reds but it just wasn’t happening, I tried three dead reds and finally hooked a better fish but it was a 4oz perch and as far as the match was concerned I was still blanking!

Another hour passed with no action apart from the odd small roach, Rob finally got on the scoresheet with a small skimmer but unless things changed dramatically, nobody was going to threaten Jacko and Alvin. I went for a wander to see how the others were doing and I still had a pound side bet with Jeff. Bill hadn’t had a bite yet and Jeff said he had a few bits but crucially no skimmers yet, Roger had lost a big eel and then I got to Jacko who said he’d had around ten fish in the first couple of hours but had slowed up, he’d also landed a couple of small carp and lost a big fish.

As I reached Alvin he was landing a nice roach and said he caught some good skimmers and was admitting to 10lb, Scott was still on three skimmers so I nicked a handful of his worms and headed back to my peg via John who said he’d only caught some roach. I tried half a worm but all I had was a couple more roach and although any thoughts of framing had long gone, I just wanted to catch a little skimbob to take a pound off Jeff!

I went through the motions for the remainder of the match, John packed up with an hour to go, with half an hour to go, my float buried and I hooked a carp which shot off, the hook pulled out and that was as exciting as things got for me. Scott had a run of skimmers to finish with a flourish, landing one on the whistle.

I packed up and went to watch the weigh in, Roger didn’t weigh, Jeff said he’d had two little skimmers and he’d only kept them to show me but he was winding me up, so the side bet was a draw which I was happy with given how I’ve been doing lately! Bill hadn’t had a bite, Rob didn’t weigh, nor did I, John had gone and then Scott had 8lb 11oz before we got to Alvin who had a nice net of skimmers weighing 16lb 14oz. Jacko didn’t think he had that but when he pulled his net out he’d had a lovely days fishing to win with 20lb 9oz. 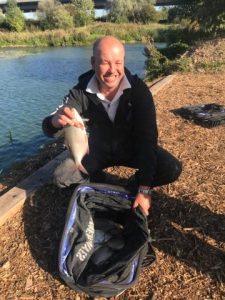 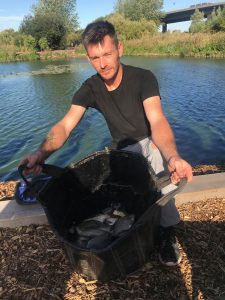 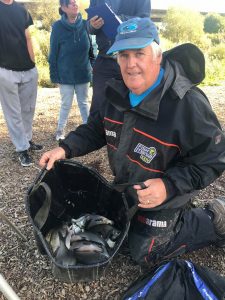 Jacko had a lovely day to win with 20lb 9oz

The skimmers certainly seemed to have followed the wind today and with Jacko having loads of room on the bottom bank, a class angler like Steve wasn’t going to make any mistakes from there.

So my bad run continues as I lurch from one disaster to the next, my drawing hand isn’t doing me any favours but even when I do manage to get on a half decent peg, I’m just not getting it right. Dillington next so make sure you come back to see how I get on.