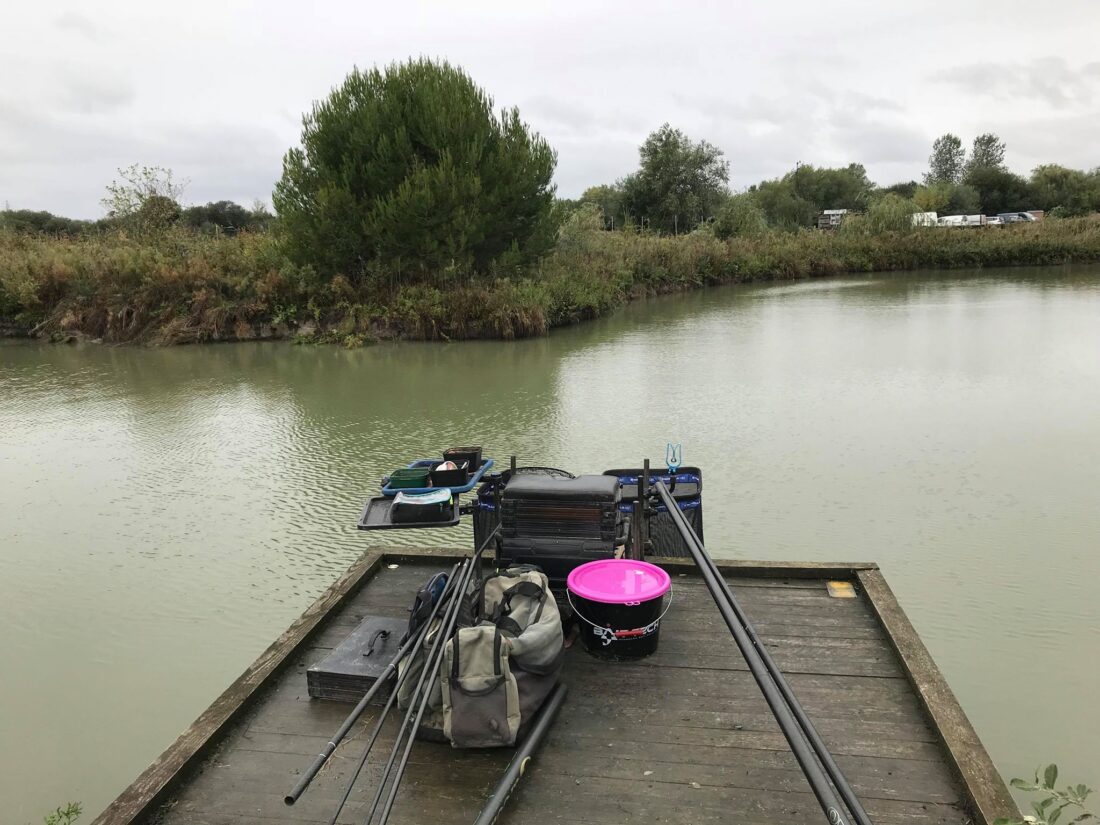 With the Ilminster summer league over and the first river match not until 7th Oct, I booked in for the open on Longs. It was looking like being a wet and windy one as I met Jess (Zooner) and Alvin for breakfast at the Toby in Taunton. It was still chucking it down as we pulled into the car park at Summerhayes although the wind wasn’t too bad so far. I said hello to everyone, got some nets, paid my pools and had a coffee while waiting for the draw and praying for a peg in the 30’s.

Pete announced the draw and as the bucket started doing the rounds, I heard a couple of the pegs I didn’t fancy had gone already so decided to get in early for a change. I was just about to stick my hand in the bucket but let Glynn’s boy Kenzie go before me and of course he pulled out peg 36 for his Dad, spot on again and Bill had won the silvers match on Friday from there with over 17lb. I grabbed a ball but didn’t want to look, I opened my fingers and peg 15 was staring back at me – gutted! Now don’t get me wrong, it’s not the worst silvers peg on the lake and Eric Fouracres won off it with 11lb odd a few weeks back and I had a similar weight off it the last time I drew it, but it is primarily a very good carp peg and I was sure I wouldn’t be able to compete with the 30’s, especially with Glynn on 36, Alvin on 33 and Jess on 31.

I felt for Rob Birch too as he’d drawn peg 4 on cyanide straight for the third time in recent weeks and was almost on the verge of not fishing but said he’d give it an hour. I drove down and parked at the bottom, Geoff Young had drawn peg 12 with Yardie next door although he’d left his landing net at home so I lent him one of mine although the way I’m fishing here lately, I don’t need one at all! On the plus side, at least it had stopped raining! 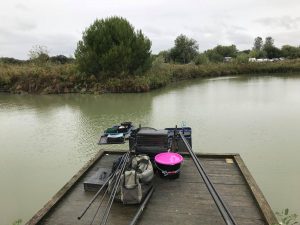 I set up a 0.2 gram NG Mini Gimp to fish the top two lines and a 0.3 gram version to fish top two plus two and at 11 metres, the side tray contained the usual Bait-Tech 4mm Xpands for the hook, some wetted down micros for feed plus some Juice and Special G Green groundbait I’d mixed the night before. Jeff Sparkes came down to check we still had a pound on it as he was on 28 where he’d won last Sunday.

On the whistle I cupped in a ball of groundbait on the top two line straight out and another at top two plus two before starting on the short right hand line and just tapping in a few micros. Second put in, the float slid away and I netted a 4oz hybrid to get me up and running. The next bite resulted in a carp which went under the platform and somehow managed to transfer the hook to the leg of the pallet! I managed to get the rig back and gave it another five minutes before swapping to the left hand side, no indications there so with half an hour gone, I went over the short groundbait line for the first time.

The first bite saw a foulhooked carp tear off at a rate of knots before I came back with a scale on the hook, the next indication also resulted in a lost carp and I was hoping it wasn’t going to be like this all day! As soon as I hit the next bite I knew it wasn’t a carp and netted a decent skimmer of 12oz, so with sixty minutes gone, I had a pound of silvers which was off the pace needed to do well but I wasn’t too worried at this early stage. The only anglers I could see were Jim Jenner on 18 and Geoff on 12 and they were both getting odd carp.

No more bites on the groundbait line and I didn’t want to try the longer lines yet so kept trying to the left and right, I had a nice skimmer of 1.5lb from the left hand side that leapt out of the water and nearly landed on the platform! After two hours, I just had those three fish for 2.5lb and things would need to improve if I was going to do any good today. Rob Birch appeared behind me and asked how I was doing, I said I was struggling and was expecting him to say the same but he said he was catching hand sized skimmers but had just hooked a 3lb plus skimmer that he netted but then it’s flipped, jumped out the net and come off, gutted!

I landed my first carp from the left hand line so it was time to try the top two plus two line where the odd small bubble was coming up which didn’t look like carp to me. I fed another ball of groundbait at top two before picking up the other rig, shipping out and feeding a few micros via the toss pot. After a short wait, the float slid away and a carp took off, I hooked two more in the next two put ins and that was enough of that! I went out to 11.5 metres where I hadn’t fed anything and just put in a pinch of micros, I missed a couple of bites and then hooked a carp there, another followed and I didn’t know what to do next! I came back in on the top two plus two line but it was just carp after carp. I think I hooked seven in seven chucks, landing three or four.

By now we were past the halfway stage and I still only had three silvers for 2.5lb in the net so I checked my pockets to make sure I had enough pound coins to pay Glynn and Jeff again! I came back in on the top two groundbait line and had the tiniest carp I’ve ever seen, it was probably quarter of an ounce! Geoff and Jim were now catching quite well and Geoff even landed a couple of decent skimmers which he took great delight in holding up to show me, I gave him a friendly wave back with two fingers!

The wind started to get up and was blowing straight in my chops, at times I had to grab hold of my bait boxes to stop all my pellets being deposited in the pond (although the way things were going that might not have been a bad thing!). It was also creating a fair bit of undertow so I picked up the heavier rig which would be also be a few inches over depth on the shorter line so I could hopefully still present the hook bait half sensibly.

I did hook a fish that I knew wasn’t a carp and it also didn’t feel like a skimmer and I was pleasantly surprised when a 12oz roach came to the surface, I had another decent skimmer not long after but any hope of still getting a result soon disappeared when I went back to hooking carp. I managed two more skimmers before the carp moved in with a vengeance in the last hour and I started getting some lumps, landing five for about 30lb and I wasn’t too upset to hear the final whistle.

I packed up and took my kit back to the car before going up to watch the weigh in, I missed Glynn who had struggled for 6lb 8oz but I still had to give him a pound, Alvin had done well, weighing in 126lb 1oz from peg 33 which was also a golden peg so he had a chance, although the bankside grapevine was saying that Bill had a big weight on peg 39. Jess ‘Zooner’ Jordon had 9lb 3oz of silvers from peg 31 and then Jeff Sparkes went into the lead with 12lb 5oz from peg 28, not bad considering he was admitting to 8lb! He had a lovely perch of 2lb plus that took a liking to a pellet! 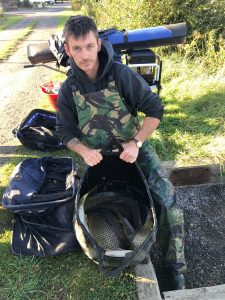 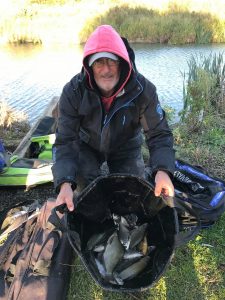 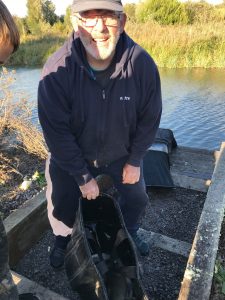 Jeff had a nice bag of silvers weighing 12lb 5oz which included a big perch caught on pellet!

Ray Wickham on 24 had 8lb 7oz which included two big crucians and then we headed to Jim on peg 18 who had 82lb 15oz. My carp went 52lb 10oz and my silvers added 5lb 3oz to give me 57lb 13oz which was just shy of my best ever Summerhayes weight which is 58lb odd (so I couldn’t even do that!). Geoff had 65lb 1oz from peg 12 and then Yardie weighed 85lb 15oz despite losing his top four which came off as he was shipping back with a fish on (thankfully he got it back using the boat after the match). 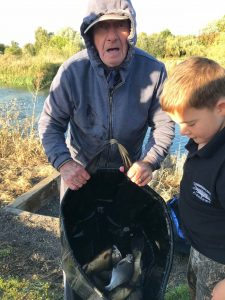 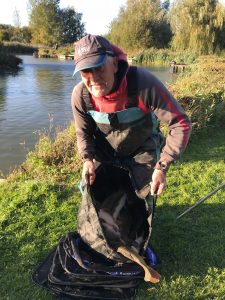 The scales then reached cyanide straight and Rob had done really well to weigh 11lb 5oz of skimmers but was left cursing the Harry Houdini slab which had cost him the win. Last but certainly not least was Bill ‘The Paste King’ Hopping on peg 39, after several weighs his total was a brilliant 161lb 15oz, equally impressive was the fact that he’d clicked and admitted to 160lb, there’s a fair few of us (me included) that can’t even get that close with a much more modest weight of silvers! Bill is certainly living up to his nickname as that’s four or five wins on the trot now (carp and silvers), put him on a half decent peg and there’s only going to be one winner, well done mate. 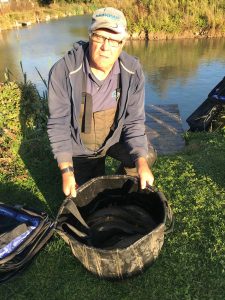 Come on Bill, give us a smile, you’ve won again!

Another disappointing day for me, my next match here is the silvers final in a few weeks, a peg in the 30’s would be nice but I’m not holding my breath!

I also have to say I’m still really impressed with the Guru F1 Pellet Barbless hooks, they’re quite a fine wire hook and they just don’t lose their sharpness. I caught all those carp today including some 6-7lb fish and I never had a hook straighten, just brilliant. I popped into Somerset Angling on my way home during the week to get some more and I just can’t see me using anything else for commercial silvers.

Before I go, a friend has asked me help him sell his fishing gear, the list is below, if there’s anything you’re interested in, give me a shout via the contact form on here or via Facebook where there are some photos. Feel free to make a sensible offer or if you want more info just let me know,

Next up – Committee charity match at Hebditch’s pond