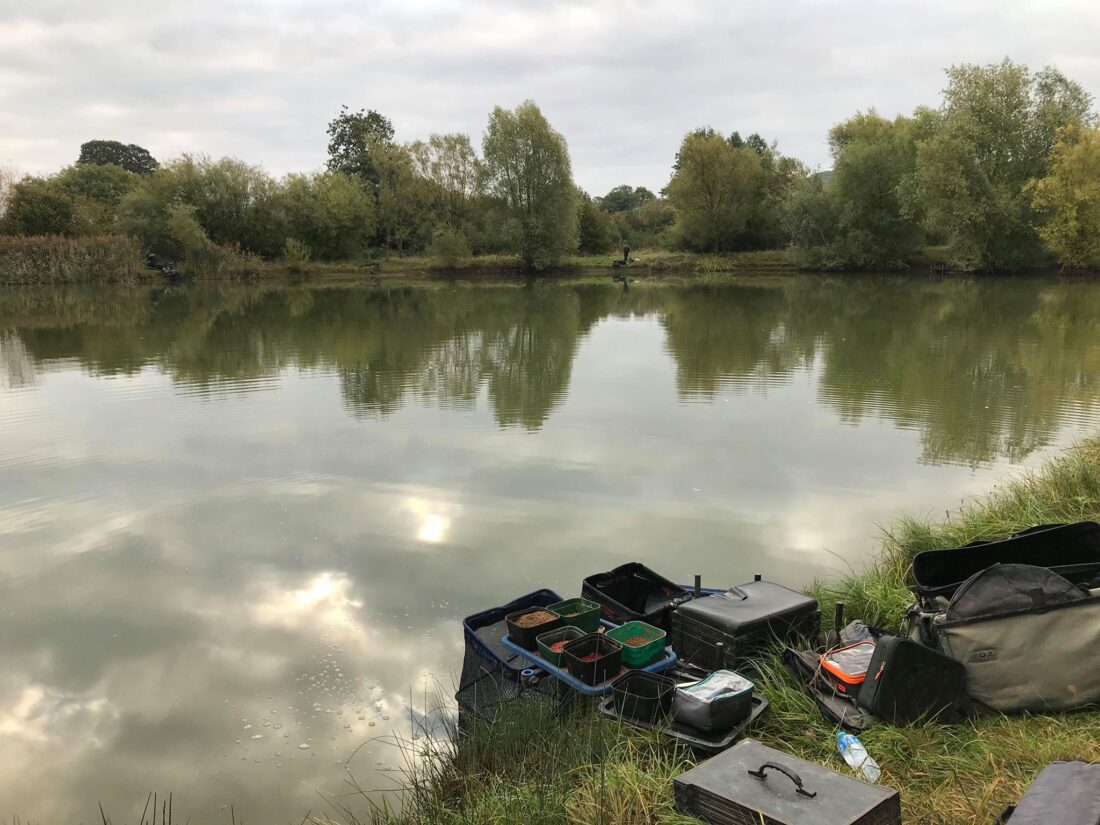 I always look forward to fishing Hebditch’s pond but because of the hot weather and low water levels we haven’t fished it since February when it was a bit of a struggle so hopefully we’d get a few more bites today. As always we would be donating a proportion of the entry fee to charity and this time the proceeds from the match and a quiz night later would go towards installing a peg for less abled anglers at Dillington.

We all met at Cartgate for brekkie before doing the draw and I pulled out peg 9 which put me on the near bank, one peg off the reeds, it’s a decent area which I’ve done well from before. We’d left the flier at the top end out although the pegs either side would now be the ones to draw, Nick Payne was on peg 1 and Steve P was on 10 on my right so my pound was in danger today. The pond was flat calm but it was mild and with loads of fish topping I thought there was a good chance I’d catch shallow today. 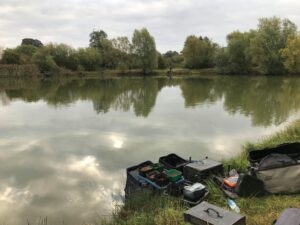 I set up a little inline dibber for fishing shallow, a 0.4 gram Drennan Carp for fishing on the deck at 11.5 metres and a Carpa 2 for fishing two 5 metre lines, one to the left by the reeds and the other to the right. All rigs had size 16 Kamasan B911’s to 0.14mm hooklengths. On the side tray I had corn, dead red maggots and 2mm (soaked the night before), 4mm and 6mm Bait-Tech Carp and Coarse Pellets.

Hurf shouted the all-in and I fed two lines at 11.5 metres, one with micros and corn and the other with micros and dead reds, both the 5 metre lines received micros and corn. I started shallow with a banded 6mm pellet and started feeding 4mm and 6mm pellets on a regular basis. Nick was into a fish straight away and looking across the pond, Rob, Leighton, Frank and Hurf weren’t far behind.

I gave it twenty minutes but never had a bite and as Nick already had three or four fish and most people seemed to be catching, a change was required. I picked up the deeper rig and slipped on a grain of corn before shipping out to 11.5 metres. I fed some micros and corn via the toss pot, the rig settled, the float slid away and carp number one was on! I had three in as many put ins between 8oz and 2lb before hooking a fish that didn’t feel like a carp and a stunning little barbel of around 10oz came to the net! 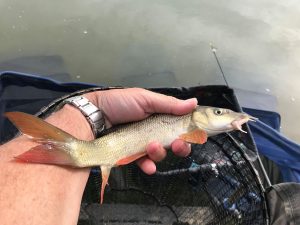 I was swapping between the two longer lines and it was a bite a chuck, after the first hour, I had ten carp, that barbel and a rudd. The second hour was almost identical with another ten carp from 4oz to 2.5lb and everybody seemed to be catching quite well although Nick was bagging. Going into the third hour, my catch rate increased and I couldn’t get my rig in fast enough, I had eight carp in thirty minutes and was starting to make inroads into Nick’s lead when the bites just stopped and looking around the pond it was the same for everyone.

As we reached the halfway point I was up to twenty nine fish but it had slowed right up so I cupped in some more feed and tried the five metre lines for the first time. Nothing on the left and just a missed bite to the right and I’d gone from bagging to struggling, back on the longer line and there were still fish topping and a carp even tried eating my float which prompted me to have another go with the shallow rig but still no bites.

I’d been feeding the five metre lines with 4mm’s by hand and finally had a decent carp from by the reeds and thought I might get a few in the last two hours but it appeared to be a loner. Harry turned up to see how we were doing and gave Hurf £30 towards the cause, what a top bloke! While he was with me, I tried three dead maggots on the hook but had two tiny rudd and that was enough of that. Back on corn and I had another carp and was getting the odd bite if I lifted the float out of the water and bites were coming just as the rig settled again.

In the last hour I had another four or five carp for probably 10lb while Nick had slowed right up and my last fish just before the all out was a 6oz chublet. My final tally was 38 carp, 3 rudd, a barbel and that chub which I hoped would go 60lb if they averaged 1.5lb apiece but I did have a lot of small carp. 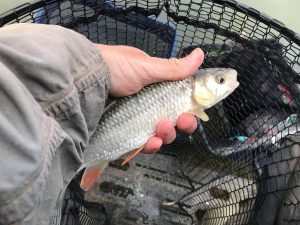 My last fish was a 6oz chublet

I packed up before going round to watch the weigh in which was starting with Nick on peg 1, after several weighs his total was 54lb. Then there were a string of close weights, Hurf weighed 15lb 2oz, Big Frank had 17lb, Leighton had 15lb 6oz and Rob weighed 14lb 8oz from peg 5. Terry ‘The Toast’ had 7lb and then Dave had 3lb 4oz from peg 7. 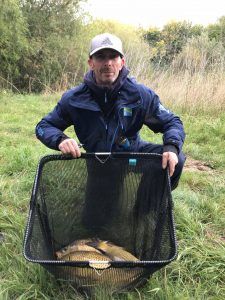 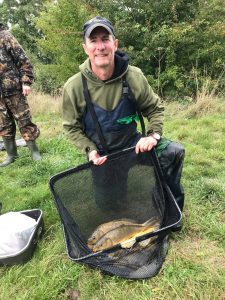 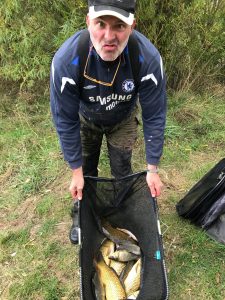 Big Frank was delighted at having his photo taken! 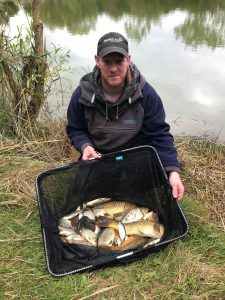 Leighton had 15lb 6oz which included lots of small carp 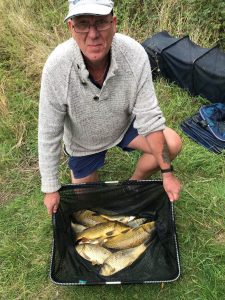 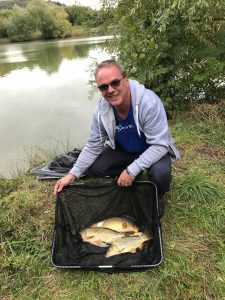 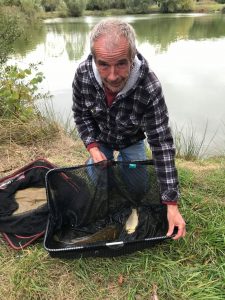 Tony Newman had been really busy and weighed 4lb 6oz of small roach and rudd, he also added a carp to give him a total of 7lb 15oz. Then it was my turn and my silvers weighed a pound before my first carp net went 26lb 4oz, this was going to be really close and I thought I wasn’t going to have quite enough, my second carp net went 27lb 6oz giving me 53lb 10oz of carp but crucially my silvers gave me a total of 54lb 10oz to put me in the lead with only Steve P left to weigh. He had some nice carp and after two weighs his total was 32lb 9oz which put him in third spot (he still had to pay me a pound though!). Thanks to Rob Cox for the photo* 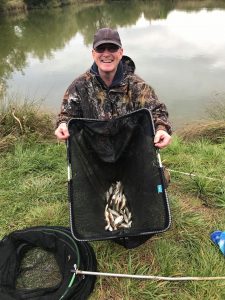 Tony had been really busy! 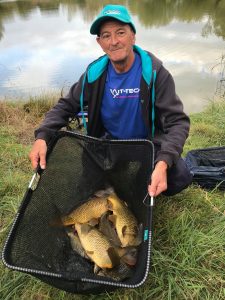 Back at the results, I was called out in first place and picked up £50, with Nick second, Steve third and Tony won the silvers super pool.

The anglers raised a brilliant £100 and along with the proceeds of a quiz and raffle in the evening a fantastic £332 was raised. A massive thanks to the Hebditch family for the use of the pond and Harry for his generous donation, Ilminster Bowling Club for hosting the quiz, everyone who donated prizes and Steve Hurford for putting it all together.

I also can’t go without saying well done to Brendon Ions (aka The Torquay Tart) who finished third overall in the two day festival held at Chard resi, he finished second overall on the first day with 77lb of bream (behind a certain Mr Shipp with an awesome 103lb) and then was second in his section on the following day. Des won with a perfect two point score after weighing in a staggering 44lb of roach on day two. Steve Hutter finished second in the festival with three points and Nigel Garrett was fourth with five. Alan Dunn also did well to win the second day with 55lb of bream.

Next up for me is something a bit different when we take on Taunton AA in an inter-club fixture on Stathe drain, a venue I’ve not fished for years (end peg please!).

Next up – Stathe Drain