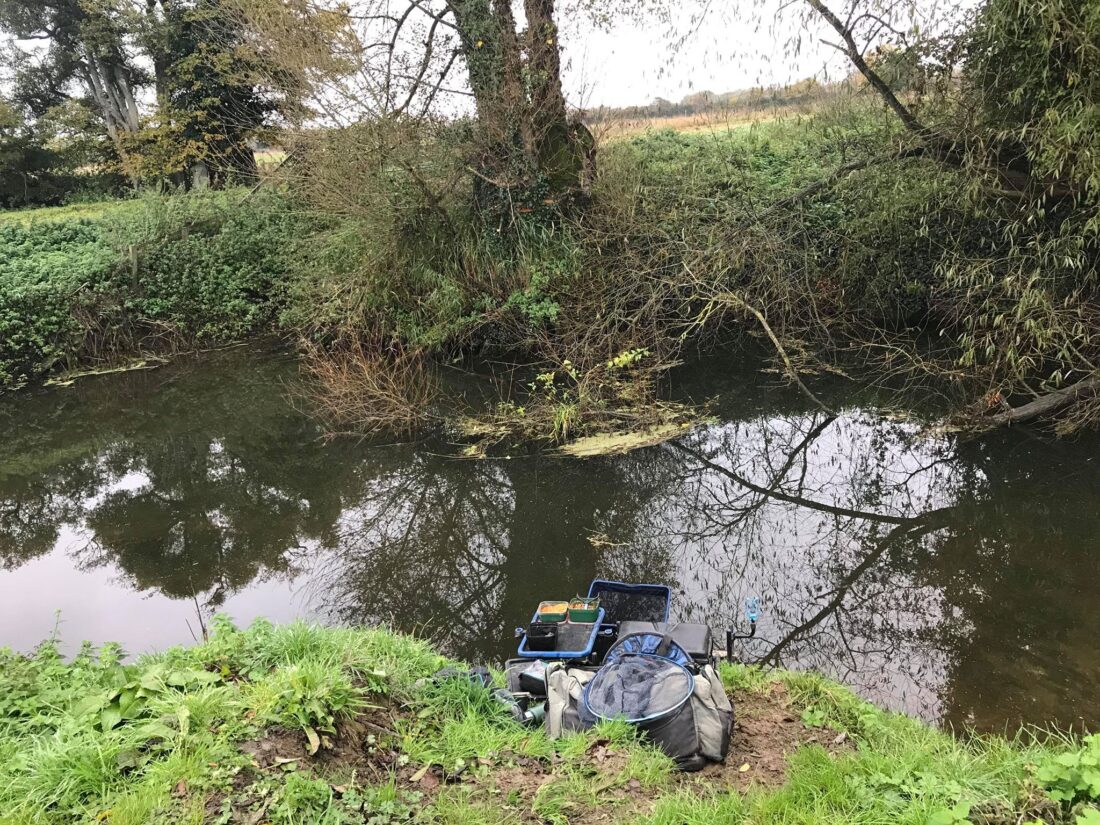 Round two and we were back at Redbridge, Isle Brewers and Hambridge, Rob, Steve and me walked it Saturday and the dredger had been down through Redbridge and Isle Brewers, which opened up a few swims although the river was still painfully low and clear. As per usual, we met at the bowling club and there was another great turnout with fifteen fishing including Paul Homewood who I hadn’t seen for a while.

I announced the draw and as people pulled out their pegs, there was the usual mix of reactions including quite a few moans which is rather disappointing when me and a few others are spending hours every Saturday walking the river and sorting out pegs when I’d much rather be doing something else! We’re never going to get it right all the time as we have to try some new pegs and with the best will in the world, you cannot guarantee everybody will catch fish!

With just two balls left, I asked Steve P to draw for me and I ended up with 126 although I also had the choice of 126a above, the last peg in the bucket put Steve on 119 at Redbridge, a new swim where a tree had gone in the river and it looked really nice yesterday. Elsewhere Jake was really happy as he’d drawn 120 and it’s swim he’s wanted to fish for ages, Terry ‘The Toast’ was on the gas pipe (109) which I really fancied and John D was on 112 where Terry had done well from two weeks ago.

At Isle Brewers, Dave P was on 123, Ben Simmonds drew 124 and Paul was on 124a where I was in the last V.E.S. match, Steve M was on 125 and Digger had the big bend (128), Rob had 129a which was in for the first time and looked really nice although he wasn’t too impressed as Frank was on the bend below (129) and both felt you couldn’t put the two swims in together. Then at Hambridge, Leighton was on H5 which won the first round, Adie was H6 and Tony drew H9 which I really liked the look of when we pegged it yesterday.

After the short drive we got to the river and parked up, Frank didn’t stay long as he realised he hadn’t put his rod holdall in the van so he had to go back and get it! I took some of my kit to the peg and although I had a look at the one above, I decided on 126 as there were loads of options and I could always pole back up above if needs be. It was still really mild and we’d had some rain although nowhere near enough to put any colour in the river but there were small fish topping everywhere and it looked like we could be in for a good match.

I set up two 0.6 gram DH16’s, both had a spread bulk with a size 18 B611 to 0.10mm and on the side tray I had maggots, casters and Bait-Tech Super Seed hemp. I plumbed up and the depth didn’t vary much all over the peg, the trouble with this peg is that there are too many options! There’s a tree in the water opposite, it looked nice below the tree, above the tree there’s a bit of an eddy and some cover across and then the straight above the bend normally holds fish as well, decisions, decisions, decisions! 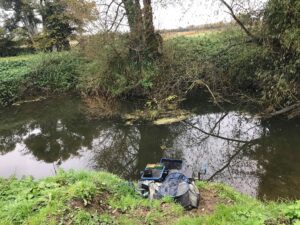 I was ready in plenty of time and popped up to see Steve and Paul above the bridge, Steve was on 125 and you could see the bottom right across the peg and I don’t think he was convinced when I said it holds lots of fish! Paul’s peg looked nice now the stick ups had gone and there were some small fish topping below, he also said he’d seen a couple of pike swirl. Steve walked down with me to see Digger and there were fish topping everywhere in his peg too, the river was alive with fish!

We headed back to our pegs and I had time for a quick coffee before the start time arrived, I baited up with a single caster and just flicked the rig out to see if I could catch on the top two, I had a small roach and a couple of tiny dace and then the float buried and loads of elastic came out on the strike, it was solid before there was the unmistakeable nod of a big roach and then it came off – bugger! I had a few more small fish but it wasn’t really happening so I added a couple more sections and started catching quite well, mainly small dace and chublets but I did have a couple of net roach and after an hour I had 32 fish (plus minnows) for around 2lb but as we were only fishing five hours today I didn’t think 10lb would be enough.

In the second hour, things slowed a bit and I only added another 22 fish and I was already having to chase the fish around a bit, with it being so clear, I also thought there might be a pike or two about. I added another section and tried above the tree and had a decent spell before things tailed off again and it felt like there were loads of fish there and it seemed like they were all over the peg but I wasn’t getting it right and didn’t really know how to feed it.

I put on another section and went above me in the straight and first put in the float buried and a decent roach was the result. Some more roach and dace followed but it was the same pattern of a few fish before I had to try somewhere else. Next stop was the back eddy and I had a good run of dace with most coming as soon as I laid the rig in, they were decent fish as well with most requiring netting. Of course I did try swinging one that came off and resulted in a tangle, I managed to sort that out and then noticed a knot in the hooklength so had to change it.

I carried on catching in spells, alternating between the back eddy and the straight above to end with 132 fish (plus loads of minnows) and I didn’t have a clue what weight I had, I thought they must average an ounce and a half apiece which would give me 12lb but I thought it might be a bit more. I packed up and walked down to see how the others had done, Digger was still packing up so I grabbed the scales and went down to weigh in Frank and Rob. I had a sneaking suspicion they’d both caught as neither had walked during the day and they both said they’d done well, Frank was first and had a lovely net of roach which included some approaching a pound and he weighed 12lb. 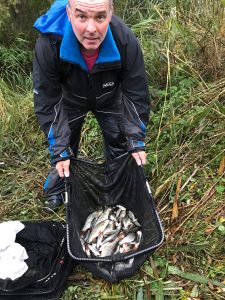 Then it was Rob’s turn and he had a cracking net of fish as well, his went 13lb 12oz (not such a bad peg after all then!), Digger then plonked 15lb of quality roach on the scales and the river had fished it’s head off! I was last to weigh and was a bit disappointed to only weigh 11lb 2oz and I was way off with my estimate. Back at the cars and above the bridge had fished well too, Dave had 5lb from peg 123 which included some nice perch and a clonking roach, Ben had 4lb 7oz from 124 but had lost a couple of chub, Paul had 11lb 10oz which was four lovely perch and 2lb of bits and Steve M had 11lb of roach and chub and he’d lost one as well. Thanks to Ben Simmonds for the photos* 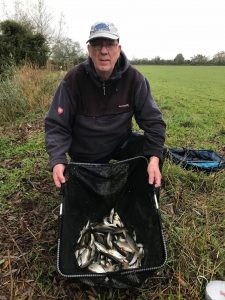 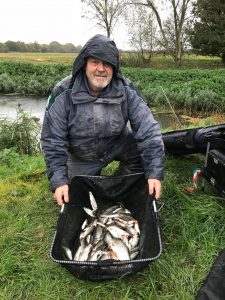 Digger had 15lb of quality roach from 128 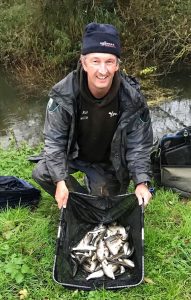 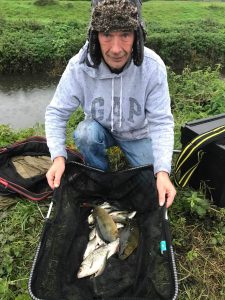 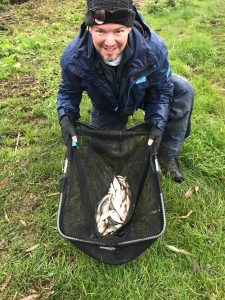 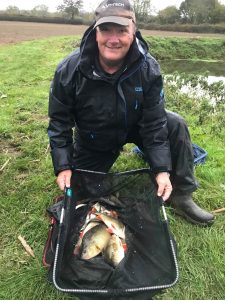 Paul had 11lb 10oz which included some big perch* 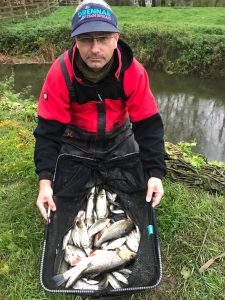 Back at the results and the weights were incredibly close at Hambridge, Leighton had 11lb 4oz of roach from H5, Tony had 11lb 1oz from H9 and Adie weighed 10lb 10oz from H6. There were some good weights at Redbridge too, Jake had 14lb 4oz from 120 although he’d missed the keepnet with a decent chublet which was costly, Terry ‘The Toast’ had a chub and quality roach for 12lb from peg 109, John had two chub and some roach for 9lb 13oz from peg 112 but had lost several chub which would have been enough to win it and Steve P struggled in new peg 119 for 1lb 8oz which was a shame. Thanks to Leighton Cox** and Jake Woodard*** for the photos. 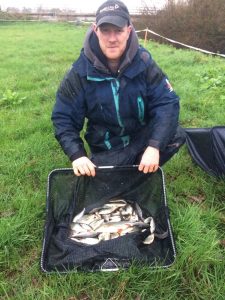 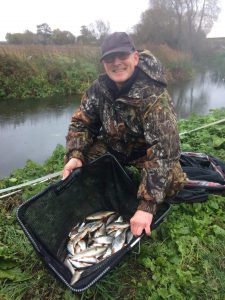 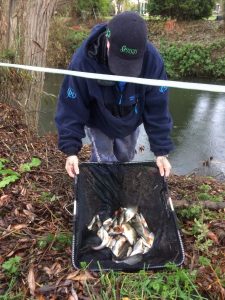 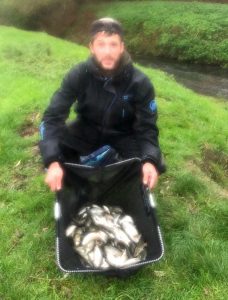 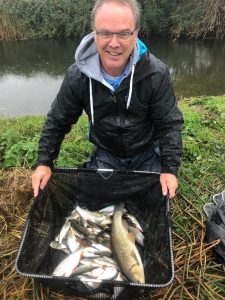 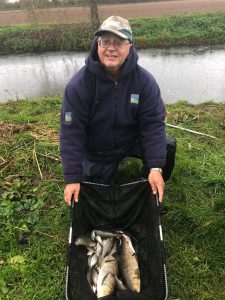 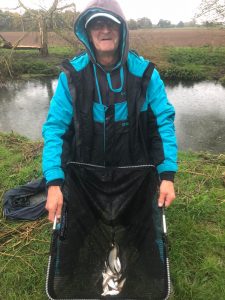 What a brilliant match! Eleven of the fifteen anglers recorded double figure weights (and there was a 9lb 13oz as well) and in all the years I’ve fished the river, I can’t ever recall that many weights over 10lb in a match and we only fished five hours! It’s not very often you catch double figures and don’t win some money but I was only fifth in my seven peg section and Adie was last with 10lb 10oz! I missed out on winning the default section money by 2oz and once again the weights were incredibly close with just a pound separating seven anglers, river match fishing at its best!

It just shows what the river is capable of, some stunning roach approaching a pound were caught, that were in mint condition and looked like they’d never seen a hook before, along with loads of smaller roach, dace and chublets which is a great sign for the future. Some big chub and perch were also caught although several big fish were lost and the majority of pegs were capable of winning today which makes for a very fair match.

As long as it stays mild, hopefully the good fishing will continue and if we get some colour in the river, we could see some big weights. In the last three weeks, I’ve averaged nearly 10lb a match and I can honestly say I’ve had a bite practically every put in! Now I’ve said all that, it’ll probably be crap next week! It’s a real shame, access and parking is so limited for large parts of the river as there’s so much untapped potential.

It’s very early stages in the league as it doesn’t really start to take shape until round three because you can drop your worst result but there are four anglers on one point after two matches,

We’ve had three different winners so far with Digger winning two, looking at last years V.E.S. league, we had nine double figure weights during the seven rounds, so far this year, we’ve had twelve after two matches!

Next up – Ilminster v Taunton