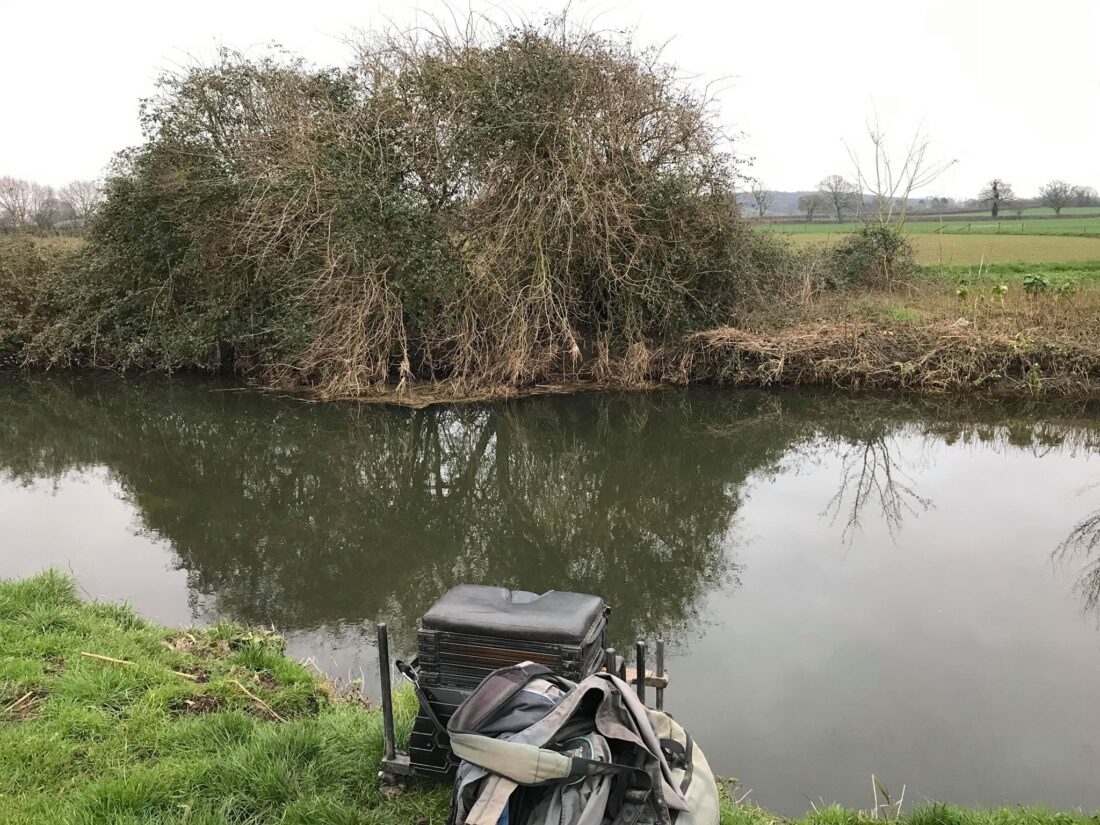 The first river fixture of 2019 was another rescheduled V.E.S. match and after a couple of frosts, it was actually pretty mild Sunday morning so hopefully it would be a good match. We were using the Redbridge, Isle Brewers and Hambridge sections and I’d said to a couple of people the day before that I really fancied peg 109 at Redbridge which holds some good chub.

We met at the bowling club and along with the regulars, it was great to see Nick Payne fishing his first Isle match with us. After breakfast, I announced the draw and people started delving in the bucket before writing their names on the section sheets. There were three balls left with Jake, Fieldy and me left to draw, Graham said he’d have the last ball so Jake stuck his hand in and came out with H5, a great peg. I asked if he’d draw for me and he handed me 109! which I was over the moon with. That left peg 129 for Fieldy and he had the choice of 129a as well, another decent swim, although to be fair, I thought all the pegs were in with a chance. Rob wasn’t too impressed with his though, peg 125, even though it had won the last two matches!

Elsewhere, Steve P was below me on 112, another peg I really fancied, Dave P was in the weirpool (120) and Nick was on 123. Below the bridge, Adie was Barney’s Bend, Terry ‘The Toast’ was on 128 and then at Hambridge, Frank was on H6 and Digger drew H9 again.

We got to the river and it looked lovely and I really thought I was going to be in for a good day, I set up two rigs, a 1 gram bodied float and a 0.6 gram DH16 and on the side tray I had maggots, casters and Bait-Tech Super Seed hemp. 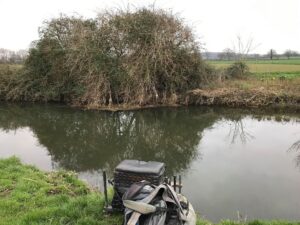 At 10:00, I shouted the all in and went across just above the bush with single caster on the hook and loose feeding casters and hemp. After half an hour I hadn’t had a touch but I wasn’t too worried as the first time I fished it, I didn’t have a chub for three and a half hours and then had five in an hour to win the match with 14lb odd, the second time I fished it, I had two early and two late so no need to panic just yet.

As we reached the hour mark, I tried maggot to see if I could catch a minnow to save the blank and first put in, the float went under and I swung in a tiny minnow and that was enough of that. Back on caster, I was holding the float back, inching it through and trying further down the swim but no bites. A further fifteen minutes passed and then a decent bite resulted in elastic streaming from the pole tip, I shipped back and although it wasn’t one of the normal 3-4lb fish, a chub of around a pound got me up and running. A fish fairly early and with over four hours to go, I still thought a good weight was on the cards.

Steve wandered up and said he hadn’t had a bite yet and I said that was my first proper bite. I really thought I might get a couple more quite quickly and I did miss a bite but then a minnow on caster had me scratching my head again. I kept the feed going in, hoping the bigger chub might show later but the next couple hours were uneventful apart from Steve shouting up that he’d just lost a good fish.

Time was running out and I was starting to think it wasn’t going to happen and then with an hour to go, a good bite resulted in chub number two, this time a little bigger at 1.5lb. A few minutes later I had a positive dig on the float just as I was about to feed, it didn’t develop further and when I looked the caster had gone! It felt like there were a few fish having a go and I thought I could still do a decent weight. I had another chub around the same size with half an hour to go and then missed a good bite.

Dave wandered up from the weir pool with all his kit as he thought we were finishing at 15:00 and not 15:30! He said he’d caught some nice roach and also reported that Steve had lost a couple more. The remaining twenty minutes or so of the match were a massive anti-climax and I never had another bite. I was quite deflated as the chub are normally big fish in this peg and are born bigger than the ones I’d managed to catch. Still my day wasn’t as bad as Steve’s, he’d lost six good fish, four in the last half an hour and had blanked which meant he had to give me a nugget!

I wandered down to weigh Dave in and he had a nice net of roach and dace for 4lb 14oz, my three chub (and two minnows) weighed a level 4lb, a disappointing day. 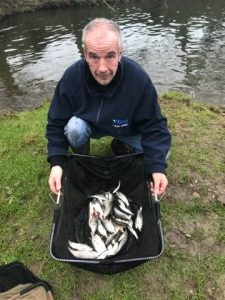 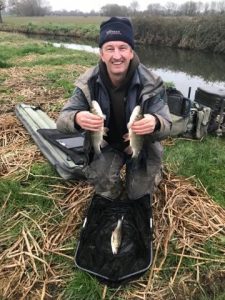 I had three small chub for 4lb

Back at the results and we were definitely in the wrong section today, Adie had the top weight at Isle Brewers with a brilliant 20lb 4oz from peg 126 but even that wasn’t enough to win as Jake had a fantastic 26lb 12oz of roach from Hambridge. A string of double figure weights followed as the river had fished it’s head off, Terry weighed 14lb 4oz from 128, Frank had 14lb 2oz from H6, Rob weighed 11lb 12oz from unfancied(!) peg 125 and Fieldy had 9lb 4oz of chub from 129a. Nick had enjoyed himself on 123 catching 3lb 8oz along with his first ever pike of around 6-8lb and Digger had struggled for a pound from H9. Thanks to Terry* and Jake** for the photos. 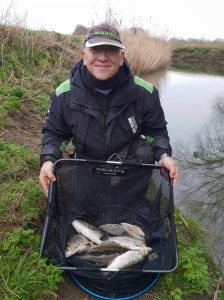 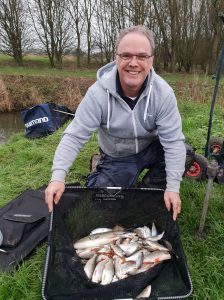 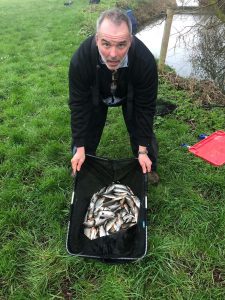 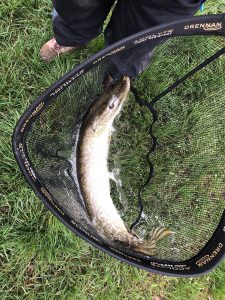 Quite a few people suffered pike trouble in the clear water, Frank landed this toothy critter** 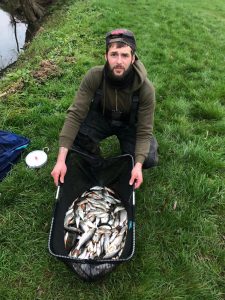 Really good weights and even with a blank, the average was 10lb a man which just goes to show how many fish there are in the bottom end of the river.

In the seven river matches so far we’ve had six different winners with Digger the only angler to win two, in the V.E.S. Precision League, after four rounds and dropping the worst result, it’s shaping up to be the most open league yet with a new leader after today’s match,

In other news, Ilminster Bowling Club are holding a race night on Saturday 19th January, starting at 7:40, it sounds like it’ll be fun and they’ve even named a horse after Ilminster AA!

Also I had some brilliant feedback from a forum I post on which made my day! ‘Brilliant write up as usual. I live over 200 miles away and feel I know all the pegs by now. Keep it up son.’

Before I go I just wanted to say a massive thanks to everyone who voted for me in the UK Blog Awards, sadly I didn’t make the shortlist which was full of fashion and make up blogs but I will try again next year.

Next up – Ilminster Warehouse League