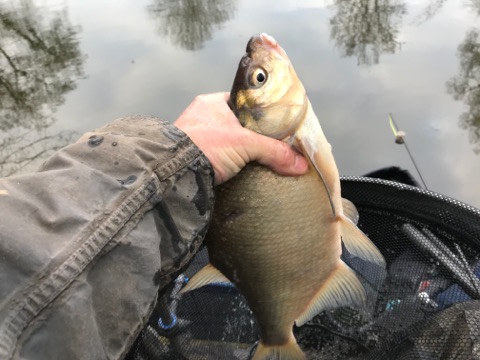 With an extended break over the festive period, I was getting rather bored and fancied getting out somewhere so text the Tart to see if he fancied a knock up at Sadborow. He said to leave it with him and got back to me to say there were a few interested and we’d meet at ‘Spoons for breakfast at 7:30. I was up bright and early and when I met the others, it was literally ‘a few’ of us, Me, The Tart and Hoff! There was another but he dropped out the night before, still it was better than another day stuck in front the telly so we bunged £20 in the pot and winner takes all.

We got out the pond and decided on pegs 7, 9 and 2 in the open water, the Tart pulled out 9 with Hoff on 2 and I had the last peg which was number 7. The pond was flat calm and despite it being quite chilly, there were odd carp moving about. 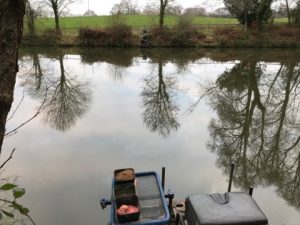 The view from peg 7 (with Hoff opposite)

I set up a Drennan 0.4 gram Carp to fish two lines at 10 metres, one straight out and another angled towards the Tart plus a line at top two plus two, I also set up a little handmade pattern for the margin to my left. On the side tray, I had Bait-Tech Carp and Coarse micros plus dead reds, corn and some 4mm Xpands.

Hoff got us underway and I fed micros along with a few grains of corn on the two longer lines and then micros and dead reds on the top two plus two line before starting straight out at 10 metres with corn on the hook. Much like the last match out here it was a slow start, I was lifting the rig out of the water by a floats length before letting it settle again and after ten minutes missed a good bite. I went back out again, toss potted in a few micros and two grains of corn and this time a positive bite resulted in a fish on, it didn’t feel like a carp and I gratefully netted a nice skimmer around 2.5lb to get off the mark. 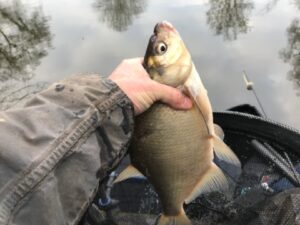 My first fish was a nice skimmer

Next chuck I’ve had a carp and then another and it felt like there were a lot of fish there, the Hoff had one and then the Tart mugged a decent fish with bread (despicable!). I was getting quite a few indications with the majority coming just after the rig had settled, I then hooked what felt like a better fish which turned out to be a 5lb ghostie and I was doing well at this early stage.

Every time I shipped out, I was dripping in a few micros on the left hand line and after an hour I had a quick look but with no indications, I didn’t stay there long. I was also feeding dead reds by hand on the top two plus two line but would leave that as long as possible before trying it.

I was still catching well going into the second hour, including a nice mirror of 5-6lb and I was a few fish ahead of the Hoff but crucially the Tart was struggling with three fish but I wasn’t counting any chickens yet as you normally get some quieter periods and in the last match, Les had caught well on that peg in the margins for the last couple of hours.

Sure enough, my bites started to slow as we passed the halfway mark and then the Hoff had a run of fish, the Tart was keeping a look out for possible mugging victims and would take great delight in announcing he’d seen one with it’s ‘periscope’ up. He was getting some good fish too, despite saying they were ‘squeakers’!

I had another go on the left hand line and after a couple of minutes, the float sunk from view and I had another decent skimmer, next put in, I had a small carp but it was short lived. Back on the other line, I had a couple more fish and was doing just about enough to stay in front but the Tart was starting to catch me up. He was starting to get quite chirpy and kept saying this would be the greatest comeback of all time.

The Tart had been catching long in the margins on dobbed/mugged bread but had slowed up so went on his open water line and had a fish there quite quickly as his comeback continued. So with around an hour left, it was time to have my first look on the short line with three dead reds, no indications for five minutes and I was just thinking of going back long when the float went and I had a decent carp, next chuck I had another but then my next fish was a tiny perch. I tried corn but no more bites so I’ve gone back out for the last half an hour.

The rest had done it some good and I had two more carp quite quickly and then just before the end, we both both hooked carp, landing them a few minutes after time was called. I finished up with 28 carp, 2 decent skimmers and that tiny perch and thought I probably had around 60lb if they averaged 2lb apiece. The Tart didn’t know how many fish he’d had and was admitting to 40lb but we all knew he had more than that.

Hoff was first to weigh and had a level 40lb, then it was the Tart’s turn and his two carp nets went 64lb 14oz, I was next and my skimmers (plus the little perch) weighed 4lb 14oz and when my first carp net went just over 30lb, I needed the other net to be similar but it actually pulled the needle round to just over 50lb to give me a total of 85lb 15oz which was a little more than I thought. 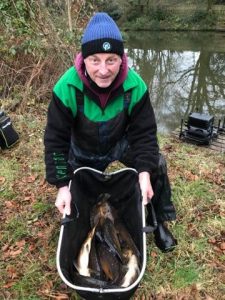 The Hoff had 40lb 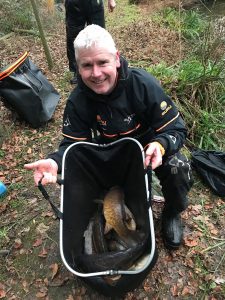 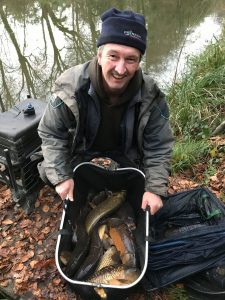 I had 85lb 15oz, another cracking days fishing at Sadborow

So a really enjoyable day out (you can’t really call it a match) and we had a right laugh (which is what it’s all about), the £60 will come in handy but much more importantly the Torquay gold is back in it’s rightful home and hopefully it’s a good sign for the year ahead!