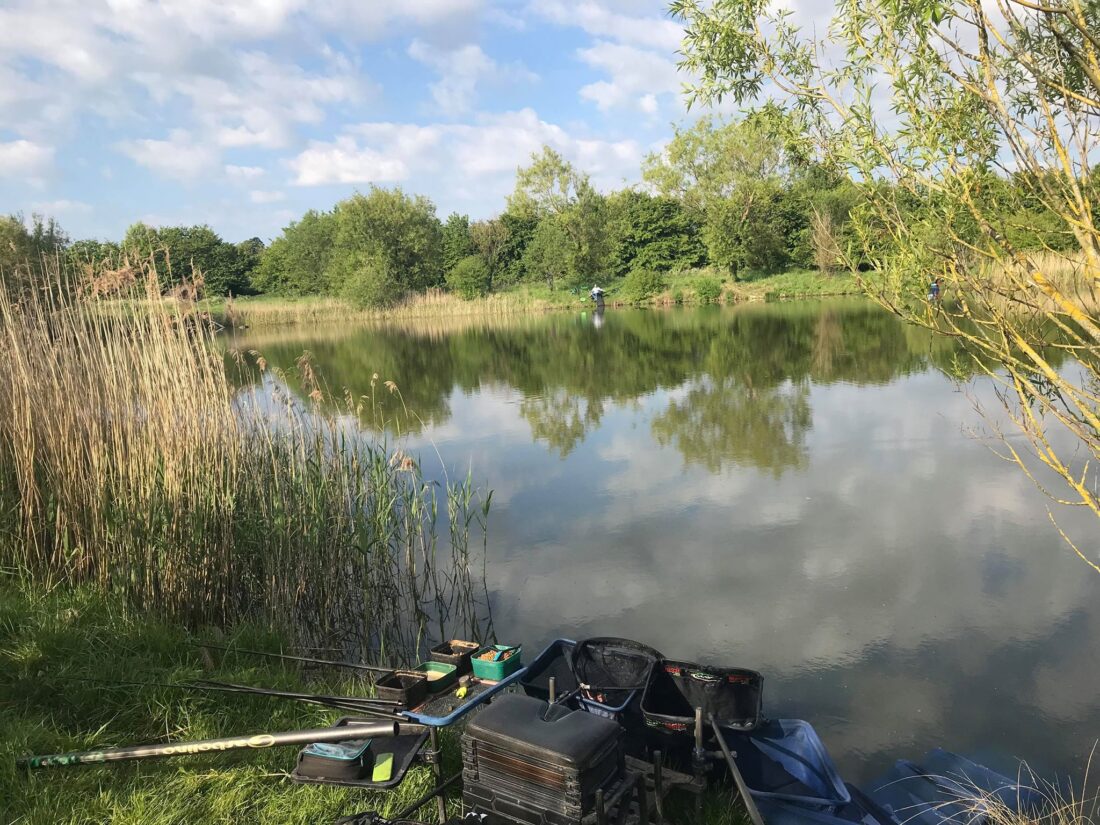 For part two of my double header I was fishing my first match with Stoke AA at Hebditch’s Pond, a venue I always enjoy fishing. It was for charity and the format was something a bit different in that we’d fish for four hours, have an hours break to weigh in and have something to eat before fishing another four hours (so effectively two matches!).

I was a bit late meeting some of them at Cartgate for breakfast (nothing new there then!) before we headed to the memorial hall to do the draw. There were 13 anglers fishing today including David Simms, Dan Mattock and Rob Vaughan who have fished a couple of Ilminster matches, I said hello to everyone, paid my pools and had a pound on the raffle before I was invited to draw first (perhaps they’d heard about my legendary drawing hand or maybe they just wanted to get one of the bad pegs out of the way!). I was hoping for a peg up the top end by the pipe or in the trees as I’ve never drawn either of those, failing that a swim on the near side as it tends to fish better than the opposite bank. I stuck my hand in a pulled out peg 6 which put me in the middle of the far bank – great!

After a short drive, we were at the pond and as I took my kit round to my peg I disturbed several fish in the margins in peg 5 and then as I sat on my box, three decent carp came right in by my feet and just sat there until I chucked my keepnets in! There were quite a few carp moving about so hopefully we’d be in for a good match. David Hilton was on peg 5 and I didn’t find out until later that he was Russ’s dad (we’ve been fishing together several times and he used to write an excellent blog). 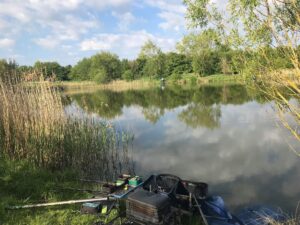 Loads of fish moving and I couldn’t wait to get started!

I set up a little inline dibber for fishing shallow, a 0.4 gram Drennan Carp for fishing on the deck at 11.5 metres and a little handmade float to fish by the reeds on my left. On the side tray I had corn and 6mm and 8mm Bait-Tech Carp and Coarse Pellets.

David got us underway and I shipped out with the shallow rig, fired a few pellets out, lifted and dropped the rig a couple of times, the float buried and carp number one took off, I netted a nice fish of around 4lb and then had it’s twin not long after. Dan Mattock over on peg 13 had a couple of fish on the feeder and it was looking like it was going to fish really well. After half an hour I had four carp and thought I was going to do a big weight but then it was like somebody had flicked a switch and I couldn’t get a bite.

I gave it another thirty minutes but no more bites and as Dan had caught a couple more carp, I had to try something else so went out with the deep rig and missed an indication before catching my fifth carp, I missed a couple more bites before that died as well! Looking round the pond, nobody was catching much now, David H had landed a couple of carp and was catching a few small fish, David S in the corner was struggling as was Marco Smith on peg 3 and Rob on peg 2.

Carp were still moving about out in the middle although a few people had tried the pellet waggler without much success. I tried the inside line briefly but had no indications so with around an hour to go, I stuck a couple of sections on and tried flicking the rig in the general vicinity of any fish moving at 14.5 metres. I did miss one bite  and then with about fifteen minutes of the first period left, I had carp number six. Odd fish were coming within pole range and I laid the rig in the flight path of one carp, the float buried and I missed it with the all out being called shortly after. 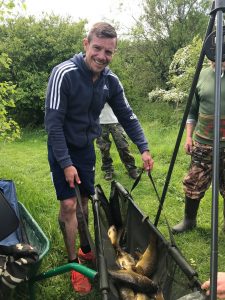 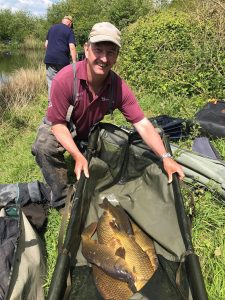 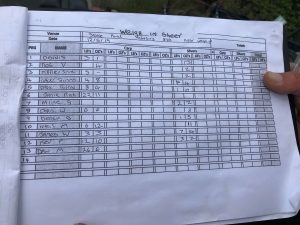 Scores on the doors after four hours

While we waited for the second four hours to start, a few carp started showing themselves and I really fancied I’d catch shallow again. The whistle went and I was hoping for a repeat performance of earlier but I couldn’t get a bite and it was similar story with the deep rig, Dan had a couple of early carp on the feeder to extend his lead but I wasn’t panicking yet as nobody else was catching much either and there was a long way to go yet. Then Marco had two carp in quick succession and David H caught a nice fish but I still couldn’t buy a bite!

After an hour, I still hadn’t caught so went out to 14.5 metres again but the carp had disappeared, David H landed another carp and he was fishing quite close in so I picked up my margin rig and tried by the reeds with corn on the hook. About two hours into the second half I finally had a bite but it was a tiny 3oz carp, I had another not long after but as the reeds were knocking every now and again, I thought it was only a matter of time before I caught some bigger fish.

I did lose another small carp but with around an hour to go, the pond had just switched off, Dan now had four carp and I couldn’t see anybody catching him now. I was hoping I was still hanging on to second place but couldn’t see how anybody was doing to my left. Going into the last thirty minutes, the odd carp started moving about on the surface so I went back out long with the shallow rig but I was going through the motions a bit and then the float went and a carp tore off at a rate of knots. I played it carefully and netted a 4lb carp with a few minutes to go. I still had time to go back out but no more action and it had been hard going in the second half.

I’d nearly finished packing up when James W walked past to start the weigh in, I asked how he’d done as he was leading the silvers after the first half and he said he’d fished for carp in the second half catching three decent fish and around thirty tiny ones! David H was first to weigh this time and had 8lb of carp and 1lb 11oz of silvers, my three fish went 4lb 5oz, Mike G and Chris W didn’t weigh and then Derek G had on peg 9 had 8lb 10oz of carp. 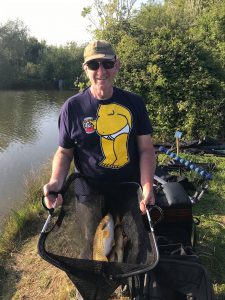 David H had 9lb 11oz at the second weigh in (great t-shirt by the way!) 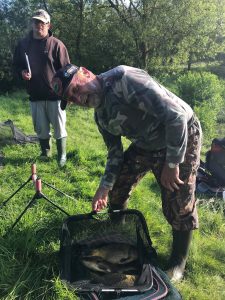 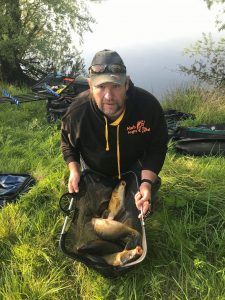 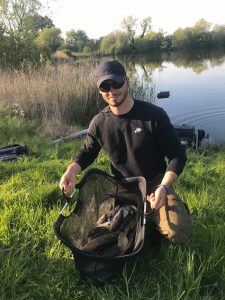 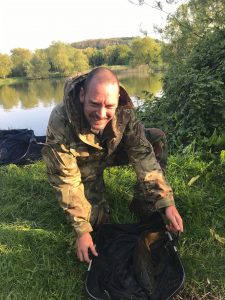 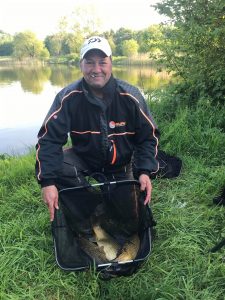 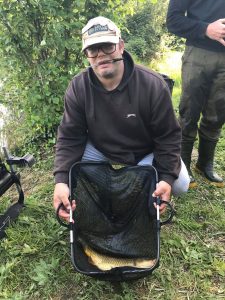 After David and James had added up all the weights, they gathered us round for the results, Dan had won with a combined weight of 39lb 7oz, James was second with 33lb 3oz, I ended up third with 27lb and picked up £20 and with James framing, Kevin won the silvers with 5lb 12oz.

Then it was time for the raffle draw and peg 5 was pulled out (close!) which meant David H took home a nice pack of beer, in total £142 was raised for charity which was brilliant. I have to say it was a very well organised match and they’re a great bunch of lads and I’m looking forward to fishing Todber with them in a couple of weeks. Massive thanks as always to the Hebditch family for letting us use the pond.

So after two long days and basically the equivalent of three matches, I was knackered and I’m not sure I could do it too often although I am going to try and do the odd Saturday match.

In other news, Chard had a match on the reservoir on Sunday which Alan Dunn won with an excellent 112lb 6oz of bream from peg 1, A Gardiner was second with 95lb and Les Braunton was third with 76lb 2oz from peg 50. This coming Sunday (19th May) it’s round two of Ilminster’s Summer League at Dillington, book in with Nick Payne on 07500 432687, Rob Cox or Leighton at the Warehouse if you would like to fish.