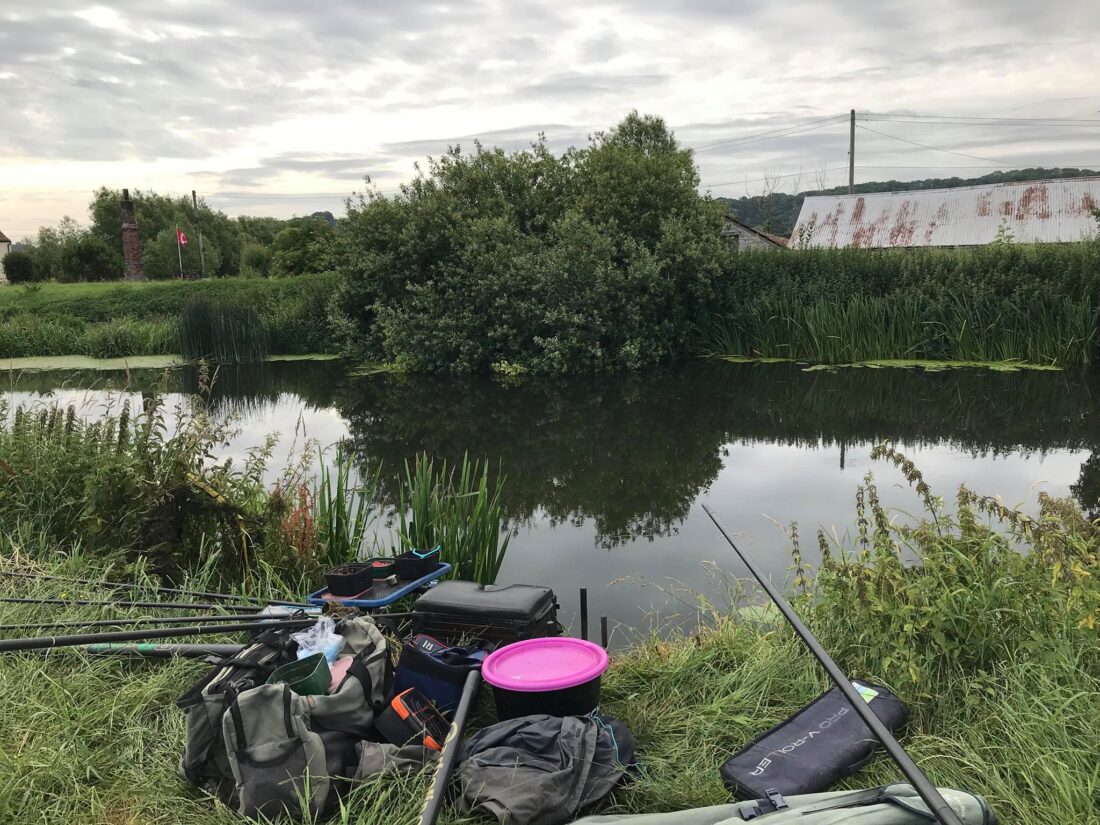 I’m really enjoying these inter-club matches as you get to fish some different venues, see some faces I haven’t seen for years and the crack is always good. I have fished the Parrett near Oath before, back in the Langport League days and Ilminster used to have some matches on the stretch at Wick which is a little further up. It’s a lovely looking bit of river with quite a few trees and bushes on the far side. Stevie P was also fishing today and with quite an early draw, I was panicking a bit, trying to find somewhere on the way that would be open at 7:00 for brekkie. I was resigned to having to go out of my way to Cartgate when Steve came to the rescue and spoke to Drew at the Bowling Club who said we could have breakfast there, star man.

Parker ‘The Pole’ had also been to have a look at the river on Saturday and said there were loads of big chub by the footbridge and my appetite was well and truly whetted although my initial excitement was tempered slightly when Baz phoned me to say the Saturday match was won with just 2lb 15oz and most of that was made up of a 2lb perch that had grabbed a gudgeon!

Sunday morning arrived and I was up bright and early again (which is starting to become a bit of a habit!) and after a scorcher the day before, it was overcast which boded well for the fishing. After a lovely breakfast we headed to the Parrett and arrived in good time, there were already quite a few cars there with people unloading their kit and getting it across the footbridge. One of the first people I bumped into was the Hoff who was fishing for Langport and therefore the enemy for the duration of the match.

I paid my tenner pools and as always, had a £1 on the raffle where all the proceeds go to charity and over the year they raise a substantial amount for good causes, brilliant stuff. With a section above the bridge and one below, there were effectively four end pegs and they were the ones everybody wanted (where’s the Tart when you need him?). Chris Sandford announced the draw and I delved in and pulled out peg 7 which was four above the footbridge so not too long a walk and it looked really nice with tree cover on the opposite bank.

Chris Sandford was on my left and said my peg was known as ‘The Barbel Swim’ as one around 3-4lb was caught there last year. I set up a 1.5 gram DH13 for fishing down the middle over groundbait at 11.5 metres, it was very deep (top four) and then a 0.6 gram DH16 for fishing up in the water with strung out shot, on the side tray I had maggots, casters, hemp and Bait-Tech Pro Nat Bream Dark and Pro Nat that I’d mixed 50:50 the night before. 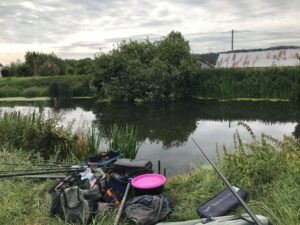 On the whistle I cupped in three balls down the middle and went straight over it with single red maggot on the hook and started getting bites although I missed a couple before catching a bleak followed by a roach, a tiny little silver bream (at least I think it was, it was too small to tell!) and then a chublet, the trouble was they probably wouldn’t go 2oz between them! I had a couple more tiny fish so tried caster and then double maggot but never had a bite on either. Back on single red I started getting the odd 1-2oz roach and after an hour I was up to a dozen fish for around 12oz.

Going into the second hour, my bites started to tail off and despite trying further down the peg, the only bites I could get were right over the groundbait. I tried caster again and had two slightly better roach and then a four ouncer that I netted to be sure! The cloud cover disappeared and was replaced by blazing hot sun and the bites went from being few and far between to non-existent! The odd bank walker reported that it was fishing really hard with Dan Squire on peg 1 and Dave Simms on peg 20 the only anglers to catch skimmers.

There were still odd fish topping and a big fish rolled on the inside to my left (bream, tench, pike, chub or maybe that famous barbel?) but bites were now really hard to come by, I tried going to 13 metres but no bites and the shallow rig just resulted in a bleak that dropped off as I swung it in! Chris next door was alternating between the waggler and the feeder but had only had a few small fish. I found that if I left my swim alone for a bit, I’d get a couple of bites when I went back over it but it was painfully slow going.

It was now so hot my maggots were starting to die so I put some in another bait box and stuck them in my cool bag. With about two hours to go I struck into a bite and a little bit of elastic showed itself, I shipped back carefully but it came off, it wasn’t a big fish, we’re only talking ounces and I reckon it was probably a perch but still would have been a bonus on a day like today.

With just over an hour to go and nothing to lose I decided to put some bait in just past the lilies on the inside and see if I could snare a bonus, I put another ball of groundbait in at 11.5 metres and then cupped in three balls and a pot full of casters and hemp on the inside. Leaving that to settle, I shallowed up a few inches and went back on the longer line, the float sailed away and another 1oz roach was swung to hand but that was it. I came in on the inside line and after about ten minutes, the float sailed away only for me to miss it! Was that my chance?

A few minutes later, the float went again but this time I connected with it and a see through gudgeon was the result! I had a couple more along with a tiny roach and another little silver bream and that was it, when the whistle went to signal the end of the five hours, I had 30 fish on my clicker but I wasn’t sure I had a 1lb! I took some of my kit back to the car and asked how the others had done, Dennis on my right said he’d really struggled, Nigel Easton on peg 9 was admitting to a pound and then Dave Pope by the bridge said he’d caught a few better chublets.

We headed up to start the weigh in with Dan and he’d caught a few skimmers plus some nice roach for 2kg 600g, Danny Blunn had 400g, Derek Goad had 420g which included a nice roach and then Chris Davies weighed 400g, Chris Sandford next to me had 220g. I pulled my net out and my ‘haul’ pulled the needle round to 700g, Dennis had 100g and then we got to Nigel and his weight was called at 600g. Dave had some nice chublets to weigh 870g and I thought he might frame with that. 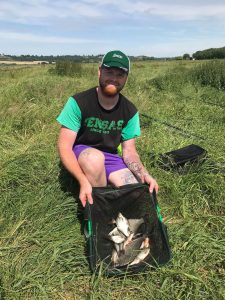 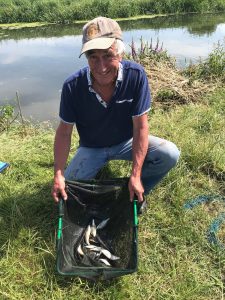 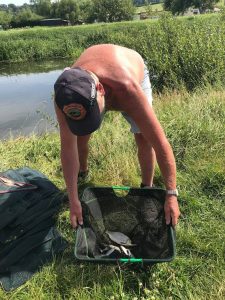 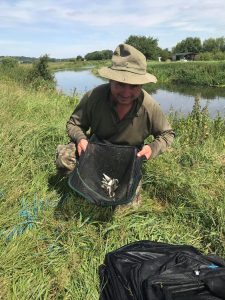 Chris Davis had lots of small fish for 400g 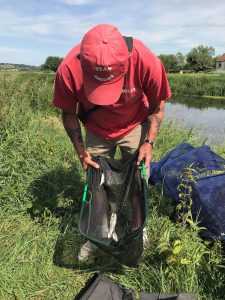 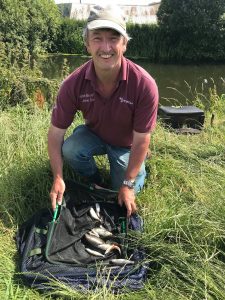 I had a mixed bag (mainly small fish!) for 700g and a section win 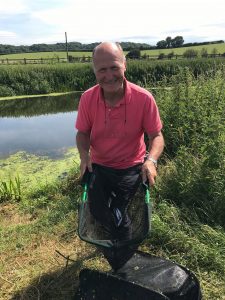 Dennis Hawkins had 100g from peg 8 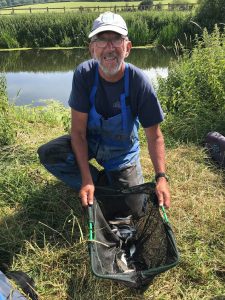 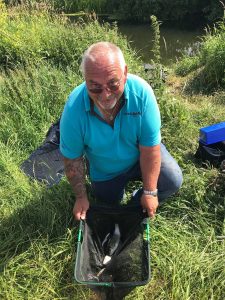 Dave Pope had some better chublets for 870g and third place

As we started taking our kit back over the footbridge, the anglers from the other section reported similar weights there as well, Dave Simms had the top weight from the bottom end peg with 1kg 400g, Hoff said he’d had 600g and I started to think I might sneak fourth place but then Dick Bull spoilt things with 790g! Steve P had 200g so at least I’d won a nugget. 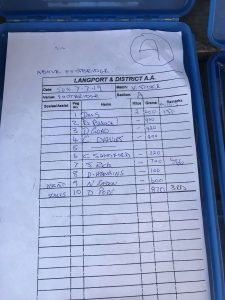 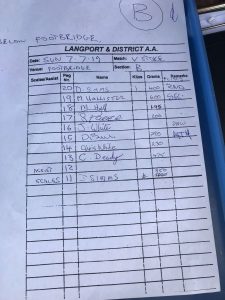 We gathered round for the results and Dan won with Dave S second, Dave P third and Dick fourth, the section winners were Hoff and me (by double default) and I picked up a tenner to get my money back.

I’m not actually sure who won on the team front but as Stoke had four of the top five weights, I’m saying we won on the day!

So a tough day but an enjoyable one as my magical mystery tour continues, from a carp lake in deepest, darkest Dorset one day to a river on the Somerset levels the next! Hopefully more of the same over the coming months.