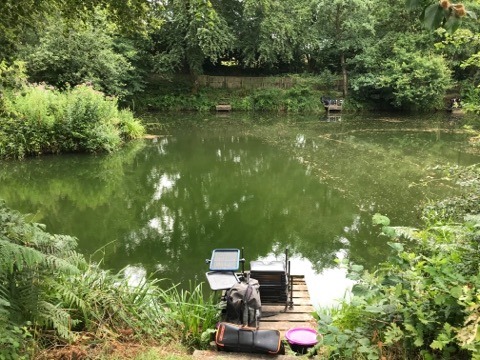 With nothing on, Hoff suggested a knock up at Sadborow and as it’s always a good day out, I jumped at the chance. A few of us met at ‘Spoons for breakfast and when Picky asked for a small one, I presumed he was still watching what he ate to maintain that Adonis like physique. The food arrived in good time with Picky’s on a much more modest plate than the rest of ours, he enquired as to the whereabouts of his toast only to be told that the small one doesn’t come with toast and he’d only gone and ordered the kids breakfast! He finished his while I was only halfway through my ‘Traditional’ breakfast, I did offer him my tomato but he declined, still at least he had a breakfast unlike the oldest paperboy in the town, Hoff, who couldn’t make it due to the papers arriving late (we always said he’d had a tough paper round!).

We headed out the pond and Bushy, Exeter Mike and Hoffy were already there, much like last week, I fancied pegs 7 or 9 and wanted to avoid peg 4. I opened my canister to see I was on peg 3 where the Tart won last Sunday and with an empty peg next door I really fancied it. Oz was on 4 for the umpteenth time (I think that’s the last four matches on the trot!), he wasn’t too upset though as he’d caught really well last Sunday, Butch was on peg 1, the Hoff was on 5 with Picky on 7, Bushy on 8 and Exeter Mike on 9.

I set up a Drennan 0.4 gram Carp for the top two plus two meat line, a 0.3 gram Drennan Margin Crystal to fish the inside to my left and a 0.3 gram Drennan Crystal Dibber for shallow/mugging/stalking. On the side tray I had dead reds, 6mm meat, Bait-Tech 6mm Carp and Coarse pellets plus some groundbait I’d mixed the night before.

There was loads of floating crap on the pond but when I got to my peg it was clear which I hoped was a good omen for the match ahead. It was also quite overcast and there weren’t loads of carp cruising around but the forecast was for showers in the morning with it brightening up later so I still thought I’d catch shallow. Hoff got us underway with a magnificent toot on his whistle and I went straight out with the shallow rig hoping for an early fish. 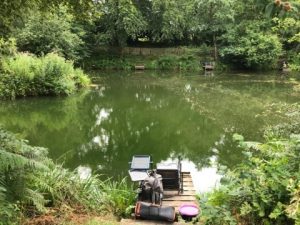 My peg was free of floating crap at the start

I was pinging out a few pellets constantly and lifting and dropping the rig and also having a go at any carp that came into range but they were turning their noses up which was a tad worrying at this early stage! It got even more worrying when after ten minutes nobody had caught a carp yet! It also started chucking it down which isn’t usually great for trying to catch shallow! Exeter Mike was first off the mark and then Oz had one but it certainly wasn’t fast and furious. I just couldn’t buy a bite shallow, I was feeding meat at five metres but wanted to leave it for as long as possible before trying it.

After an hour and with the odd fish starting to come out, I had to do something else so plumbed up at 11.5 metres and started fishing on the deck with banded pellet but that wasn’t the answer either and I was starting to fall behind. Oz had a couple of carp and a big skimmer and then Hoffy, Exeter Mike, Picky and Bushy all had two or three carp although we were a bit worried Picky might eat one of his as he was looking a bit peckish!

Back out shallow, I’ve finally hooked a carp after an hour and a half only for the hook to pull out, so possibly foulhooked and all three of my keepnets still only had water in them! Butch next door hadn’t had much either and it was looking like all the pegs that did well last week were struggling this week and vice-versa. There were a few bubbles coming up on the meat line so I decided to try it, I missed a couple of bites before catching my first carp after an hour and three quarters. Next chuck the float had barely settled before flying away and the strike met with elastic streaming out, this was either a big fish or foulhooked and it turned out to be the latter as I landed my second fish hooked in the side.

I then lost one before catching carp number three and it felt like there were a few fish there but I’m always wary as you never seem to catch on just one line for very long, hence me not wanting to try it too early. It finally stopped raining so I stuck the pole between my legs while I took my coat off and of course the float sailed away only for me to miss it, I checked the bait was still on and lowered the rig back in and tried to take my coat off again, the same thing happened and this time the bait had come off. I got myself sorted and went back in but this time the float just sat there!

Leaving that line to settle again, I went back out but still the carp were ignoring any attempt to mug them and we were now approaching the three hour mark when the pond switches off and the carp shut up shop! Compared to last week it was fishing ridiculously hard and the leaders at this stage were Mike (from Exeter), Hoff and Oz who all had 5 or 6 fish apiece but it was all still quite tight and a burst of fish could change things for anyone.

After resting the meat line for half an hour, I dropped back in on it and had a quick carp and lost one and that was it so with two hours remaining I fed four pots of groundbait on my inside line and would try it shortly although I wasn’t that hopeful as nobody was really catching in the margins. Another dabble shallow was pointless so I tried the inside and had a few little knocks, the float did sail away but the strike resulted in a 2oz perch flying out of the water and I really didn’t know what to do next.

Picky had a couple of better fish (stander uppers!) on paste and then Bushy and Mike both had a little run of fish to pull away from the pack. With about forty five minutes to go, I came back in on the meat line and had three more decent carp and lost one to put me on seven fish but with Hoffy admitting to 10 or 12 carp, Bushy on 13 and Mike on 15, it was too little, too late. I just couldn’t believe how hard it had fished and I think just two carp had been caught shallow all day!

We packed up before starting the weigh in with the Hoff, he thought he had 12 carp but when he pulled his nets out he only had 10 which went 35lb 4oz, Oz ended up with 7 carp and 2 decent skimmers for 24lb 6oz, my 7 carp went 22lb and then Butch had 15lb 8oz. Mike (from somewhere in the region of Exeter) had done well and the fish had indeed come late on peg 9 for once! as he weighed 56lb 8oz. Bushy had 41lb 8oz and then Picky had 6 carp and 2 skimmers for 29lb 8oz.

With no Smithy this week, we didn’t even have cakes to look forward to but Exeter Mike cracked open the mini scotch eggs and I managed to grab a couple before Picky realised there was food on offer! 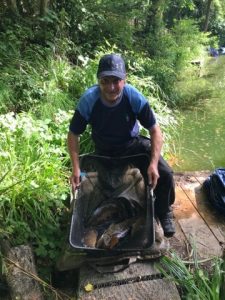 Hoff had 35lb 4oz (although his clicker needs servicing!) 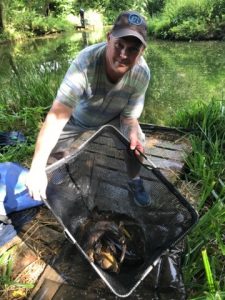 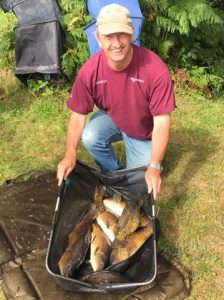 I struggled for seven carp which went 22lb 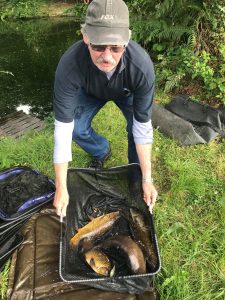 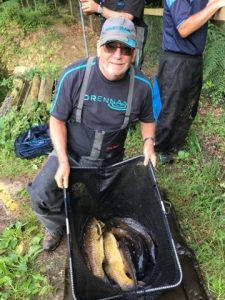 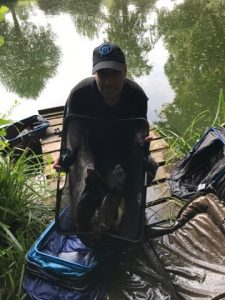 Bushy was second with 41lb 8oz from peg 8 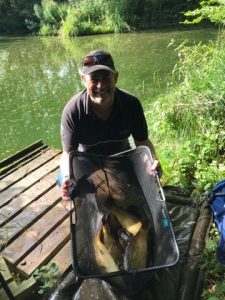 A rather hungry Picky weighed 29lb 8oz on peg 7

So another disappointing day and if I could fish my match again I think I would have spent more time fishing long on the deck and swapping between that line and the five metre meat line but if you’d told me at the start I wouldn’t catch a few shallow, I wouldn’t have believed you!

In other news, I’ve really enjoyed the first two episodes of Monster Carp on ITV4 at 8:00 and Ali, Tom and Spooner have just come back from filming at Gillhams in Thailand for the next series which looks like a cracker. Then next Friday there’s a new series of Gone Fishing with Paul Whitehouse and Bob Mortimer on BBC2 and I absolutely loved the last one so I’m looking forward to seeing what they get up to this time (and look out for my review of the book coming soon).

Coming soon – The next Spotlight feature