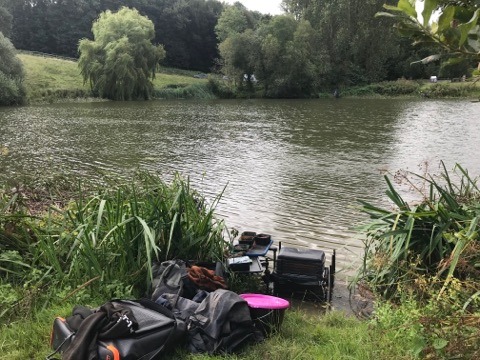 With most of the Dillington matches clashing with the Chard league, there were only a few of these fixtures I could make which is a shame. The pond had also been very low due to the farmer irrigating his spuds but it’s filling up again now. We met at the Bowling Club for breakfast and it was nice to see everybody again although numbers have been down on last year which is probably due to the patchy nature of the fishing but there have been some decent weights of bream and skimmers in the last few matches.

Nick announced the draw and I pulled out peg 7 on the far side which I was happy with as I’d done alright there last year and after a short drive we were soon at the pond. I had Terry ‘The Toast’ on my right and Steve ‘The Pole’ on the other side so I’d be able to keep an eye on my side bet and then Rob was on peg 9. On the opposite bank, Dave was on 18, John D on 19, Fieldy on 20 and Nick was on 21. 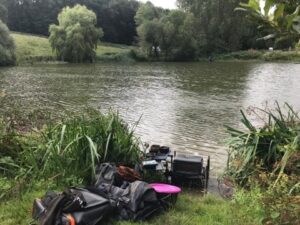 I set up a little Preston Chianti with spread shot to fish shallow, a 0.5 gram Drennan Roach for 10 metres straight out and a 4 x 16 Preston Chianti to fish two lines at 11.5 metres, one straight out and another angled to the left. For bait I had a pint and a half of casters, half a pint of red maggots, corn, hemp plus I’d mixed up some Bait-Tech Omen and Pro Natural Bream Dark the night before.

On the whistle I cupped in a ball of groundbait at 10 metres before putting in three on both the longer lines, followed by a pot of corn, casters and hemp which I would leave to settle while I fished the shorter line for a bit. First put in with a single red maggot on the hook, the float sailed away before the bait reached bottom and I missed a couple of bites before catching a small roach, two more followed so I switched to caster to see if I could get some better fish but it was more of the same and there were obviously loads of small roach in the swim. I tried the shallow rig but that wasn’t the answer and I had a quick go fishing shallow at top two plus two where I could feed by hand but after half an hour I had a dozen fish for about 10oz and was going nowhere fast.

I’d seen Nick and Fieldy both net decent fish on the far side so with three quarters of an hour gone, I was itching to go out on my longer lines and when Rob lost a decent skimmer on the pole, I chucked the shallow rig up the bank and went out with my heavier rig and a grain of corn on the hook. I started on the left hand line but strong gusts of wind meant trying to get decent presentation was a nightmare. It took a while to get a bite and then the float disappeared and the strike was met with a fair bit of elastic coming out, I shipped back gently and netted a nice skimmer around a pound and a half.

I must admit I love catching quality fish on the pole in deep water when fishing baits like corn and you know when that float goes under it’s going to be a decent fish, is there anything more satisfying than that CLUNK on the strike? I also love catching carp shallow (obviously!), and quality roach and chub on caster on the river with lighter elastics is lovely and I do get a perverse pleasure in trying to catch silvers in amongst carp on commercials.

The next skimmer followed after two missed bites and although I wasn’t bagging, I was chugging along nicely and when the wind dropped I could see there were bubbles coming up on both of my longer lines and it felt like there were a few fish there. Steve was catching a small fish a chuck, Rob switched to the feeder and landed a couple of skimmers and it looked like John, Fieldy and Nick were catching steadily on the far side. No more bites on the left hand line so I cupped in some more feed and switched to the other line, I really thought I’d get a few but never had a bite there! Rob had a couple more decent skimmers and was getting bites regularly.

I went back on the left hand line and had my third skimmer but I was having to wait ages for a bite and we were now over two hours into the match, it also kept trying to rain and there were some ominous black clouds heading our way. I had my fourth skimmer and then the heavens opened and it lashed it down, all around the pond brollies went up and coats were put on, Terry ‘The Toast’ was sat with shorts on as he’d only just got back from holiday and wanted to keep his tan topped up, I thought it looked more like Colonel Saunders had lost a couple of chicken legs!

The rain finally eased up as we passed the halfway mark and by my reckoning, Rob was winning with 8 or 9 skimmers with Fieldy and Nick not far behind. Steve was still catching lots of small roach and had also added a couple of nice perch. I suffered a really frustrating period where I had loads of indications, dips, lifts and some really positive bites that I just couldn’t hit and I convinced myself it was small roach having a go at the corn but then out of the blue I bumped a fish then had a decent skimmer and next chuck had a 12oz chublet!

Then it chucked it down again and this time it was accompanied by some really loud thunder although thankfully I didn’t see any lightning as sitting in the pond on a box with loads of metal components and holding 11.5 metres of highly conductive carbon probably wasn’t the safest place to be in the event of a lightning strike! With around an hour and a half to go, the rain stopped again and as soon as I hit the next bite, I knew it was a big fish, I shipped back gently and as I got down to the top kit, a slab around 4-5lb came to the top. It dived again and my heart was in my mouth, I could see it in the clear water, shaking it’s head as I eased it towards the net and then there was that sickening feeling as the hook pulled and I lunged desperately with the net but that was just wishful thinking. Absolutely gutted and I knew that fish was going to cost me, of course I didn’t get much sympathy from around the pond with several comments about me practising catch and release – gits!

Next chuck the float buried and another decent fish was on, from the way it tore off I knew it was a chub and despite it trying to do me in the reeds, everything held and I landed a nice fish around 2lb and there was still the best part of an hour to go. Rob had slowed up on the feeder but then had a run of fish on the pole and was looking good for the win, Terry had landed a couple of skimmers and Nick and Fieldy were still getting the odd fish. I really thought I’d get a couple more but no more bites for the remainder of the match and I knew my 9-10lb wouldn’t do any good today.

Typically as we were packing up, the rain had stopped, the skies cleared and the sun came out! I took some of my kit back to the car and caught up with scales just as they were weighing Dave in, he’d caught some roach but hadn’t found any bonus fish and weighed 1lb 8oz. Looking at the board, Fieldy was leading with 18lb followed by Nick with 14lb and John had 8lb 11oz so some really good weights. I have to mention our new lobster pot weigh sling which although looking like it was more suited to Lyme Regis, actually worked really well. 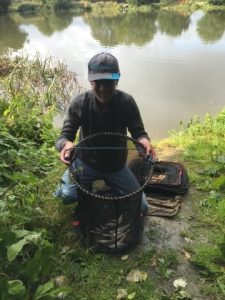 Dave with his 1lb 8oz in the lobster pot!

Rob was first to weigh on our bank and he had a lovely net of fish, around 15 skimmers and a decent bream for 22lb 15oz, Steve was next and he had 147 fish for 8lb 4oz and then my fish went 10lb 6oz which was only good enough for my pocket money from Steve and I needed that bream to frame but then again, Nick lost fish as well, Terry weighed 4lb 6oz and was going to stay on fishing for a bit. 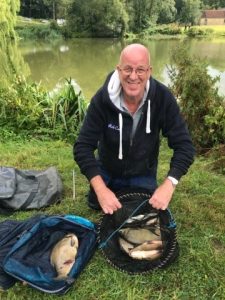 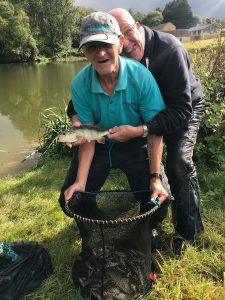 Steve got pricked by the perch and didn’t want to hold it so Rob gave him a hand (it all looks a bit dodgy to me!) 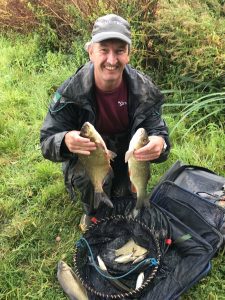 I had 10lb 6oz but left the best fish of the day in the pond! 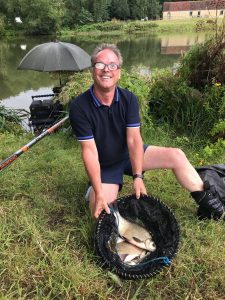 So some really good weights and I’m looking forward to the next one, I must admit I did fear the worst for the pond after some of the results last year but thankfully that doesn’t look the case. I still think the big roach and rudd have taken a battering and aren’t there in the numbers they once where but there are loads of small roach which is hopefully a good sign for the future and there is obviously a decent head of skimmers and they were all in great condition.

Before I go I have to say how much I’m enjoying Mortimer & Whitehouse Gone Fishing, just a lovely series about two mates and the fishing is really just an aside, it’s not very often I genuinely laugh out loud at the telly but I do watching this series, even if some of Bob’s falls are a bit theatrical! I’ve just started reading the book so I’ll let you know what I think when I’ve finished it.