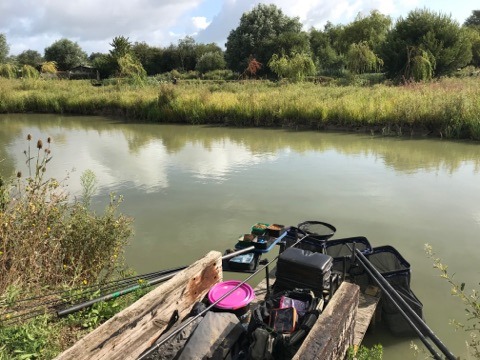 For the third of the ‘Carry On’ series of matches we were at Summerhayes although with no silvers pools I’d have to fish for vermin and I wasn’t really too sure how to go about it! I had a quick ‘Billy No Mates’ stop at the Toby for breakfast before heading to Bridgy. It was nice seeing everybody again, including Sam Powell who is in a rich vein of form winning on his last three visits here.

After deciding on which pegs to use, Barry announced the draw and said he’d be paying the winner and three sections today (with 14 fishing, there were two sections of five and one of four), I pulled out number 29 which is mid way down the track, a decent area. For company, I had Dermot on the next peg for the third match running with Barry (aka Sid James) the other side of me on 27 and Geoff  (not so) Young down on 25 completed our four peg section The Tart had drawn peg 12 with Sam on the next peg. 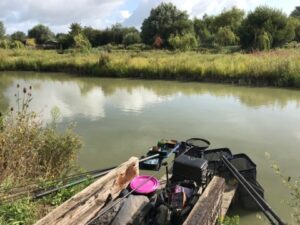 Peg 29 was my home for the day

My plan for the day was to fish pellet shallow and on the deck at 11.5 metres and then feed a margin line with a couple hours to go – simples! I set up a Drennan Crystal Dibber for fishing shallow, a 0.2 gram MD Munter Hunter for fishing pellet on the deck and then a little handmade float for the margins. I had wanted to fish as tight as possible on the inside line but plumbing up it was all over the place due to the bricks and rocks and I ended up settling on a line further out than I would have liked. On the side tray, I had Bait-Tech 6mm Carp and Coarse pellets, micros, corn, dead reds plus some groundbait.

Barry got us underway and I started shallow (surprise, surprise!) as there were loads of fish moving about, after about five minutes, the float went, followed by the elastic, I shipped back and got down to the top kit and only for the hook to pull out! The next one came off as well and I was starting to get a feel of how today was going to go! Barry had caught a couple of skimmers and I’d seen Dermot catch a carp on the method but it wasn’t really happening yet.

After half an hour and with nothing in the net, I went out with the depth rig and banded pellet, I was getting indications and had two carp quite quickly but also lost a couple of foulhookers. With an hour gone, Barry and me were on two fish apiece, Barry had those skimmers and was regretting not doing a silvers pool and I think Geoff had fallen asleep on the end.

Going into the second sixty minutes I started getting a few more bites although I was losing as many as I was landing but as far as I could tell I was still doing okay compared to those around me. The third hour was similar and I even added a couple of decent skimmers but Dermot was starting to catch well on short line with paste and it looked like Geoff had finally woken up as I could see some rather fetching pink elastic stretching across the pond!

With about two and a half hours to go and bites fading on my longer line, it was time to feed the inside and I cupped in five big pots of loose groundbait and went back out long for twenty minutes to let it settle. It was soon time to try it and I was hoping for great things but the float just sat there. Eventually the float sailed away and I missed it! A few minutes later I foulhooked a big fish which gave me a right runaround but I started to gain the upper hand and thought I had a chance of landing it but of course the hook pulled out at the net!

It just wasn’t really happening and I can’t seem to get my head around this margin fishing at all, Dermot was now fishing his inside line and bagging up and Geoff was also now catching well. A few times I’ve had what I thought were really good bites but on the strike it was just solid and I think I’ve hooked a rock or a brick. I’ve plumbed up a bit further out which seemed to help a bit and I wasn’t getting snagged up anymore but I still wasn’t catching that well. I’ve had several more decent skimmers and was cursing Barry for not having a silvers pool but was also still losing quite a few foulhooked carp. There were obviously quite a few fish there if the tail patterns were anything to go by but I can’t catch them!

The last half an hour it was a bite a chuck but by then it was too little too late and I ended up with fifteen carp and around ten decent skimmers which I thought would go around 50lb but I knew that wouldn’t do any good today. I packed up and took my kit back to car before going to watch the weigh in, the Tart turned up and wasn’t his usual chirpy, annoying self. I asked how he’d done and he said he had around 60lb but despite having loads of carp on his inside line he couldn’t catch them and had been battered off the next peg by Sam who had 200lb plus and he’d also snapped a top kit so a really bad day at the office!

Roy Lowe was first to weigh and had 33lb 4oz from cyanide straight before we got to Sam and after multiple weighs, his total was 208lb 3oz, a brilliant weight and he’s on fire at the moment, then we got to the Tart and despite his bad day I was mentally preparing myself to hand over another quid but his bad day continued as his clicking was worse than normal and he had 53lb 10oz so it might be close for the nugget. John Lowe on helipad peg 15 had 34lb 12oz, then another John on the next peg had 21lb 4oz before Yardie polished off the Tart’s day by pipping him for the section money with 54lb 2oz. 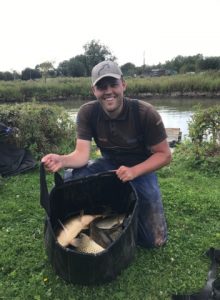 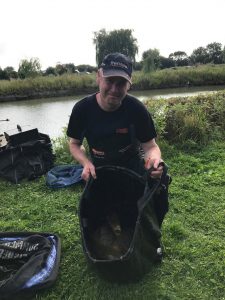 The Tart weighed 53lb 10oz and looked a broken man (anybody after some cheap fishing gear?) 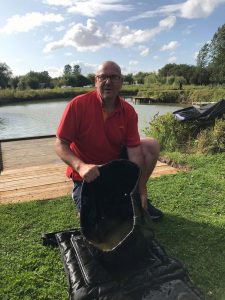 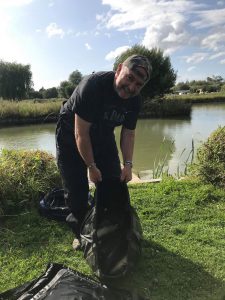 Geoff was next and had 64lb 13oz before Sid ‘Barry’ James weighed 31lb 2oz, then it was my turn and my carp weighed 47lb odd and I needed my silvers to go 7lb to pip the Tart and they went just under 9lb to give me 55lb 15oz and I’m sure the Tart’s bottom lip quivered a little bit! Dermot did brilliantly and weighed 92lb which would take the section money. 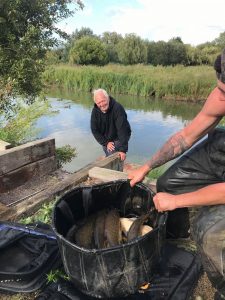 Geoff (that’s him in the distance) weighed 64lb 13oz 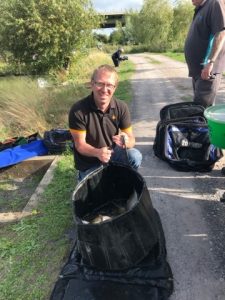 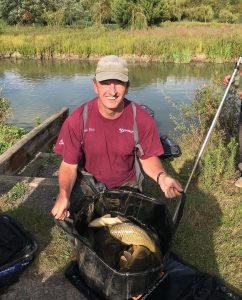 Now I know why I don’t fish for carp at Summerhayes! 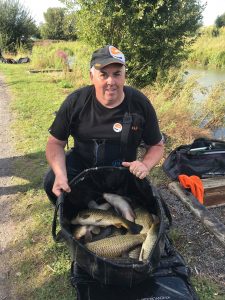 Dermot won our section and was second overall with 92lb

Young Robbie Maddicot did well to weigh 59lb 4oz and then Glenn Coburn had 56lb 8oz before a very sunburnt Jay Jay on peg 37 had 58lb 9oz of carp all caught shallow. 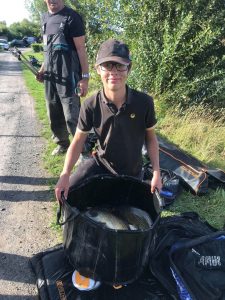 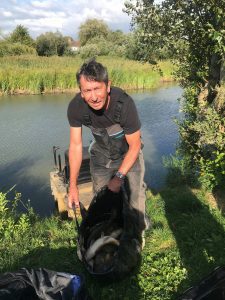 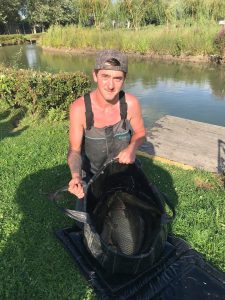 So a disappointing and frustrating day for me, especially when I’ve lost as many as I’ve caught! I really need to work on my margin fishing and try and learn how to fish the paste as it’s days like today that make me realise how far off the pace I am at certain methods.