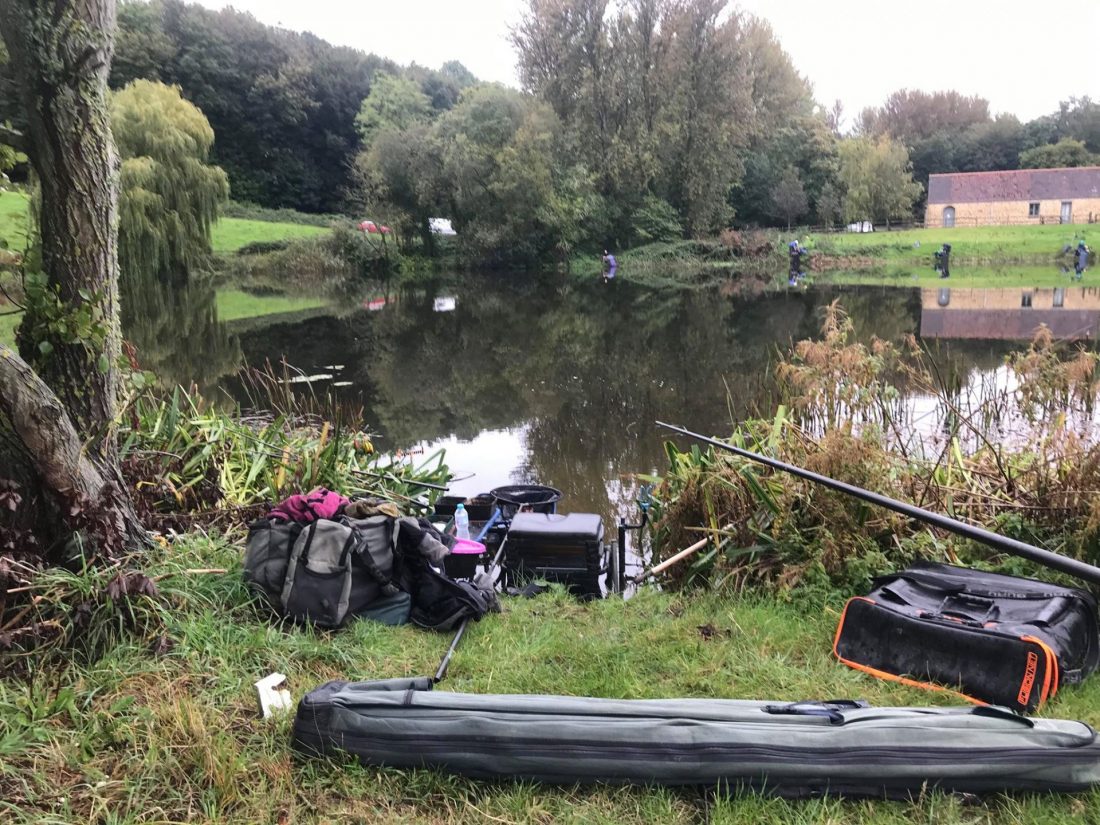 We were due to start another V.E.S. Precision league (where does the time go!) and I was looking forward to getting back on the river but heavy rain put paid to that so we were back on Dillington for a days fishing. After really enjoying the last four matches on the pond, I was looking forward to it as I thought it was still mild enough for the skimmers to have a go.

It was still raining hard as I loaded the car but looking at the forecast it was due to ease up a bit by midday, we met at the bowling club for another excellent breakfast and it was nice to see Steve P back from his holidays although we declined his offer of seeing his white bits! After a few anglers had dropped out due to the weather and/or it being moved to the pond we were down to eight plucky (or stupid) anglers. We decided on four pegs either side and when I announced the draw I got Dave to pull out a peg and he handed me number 6, the same peg as Bob’s match so I was pretty happy. 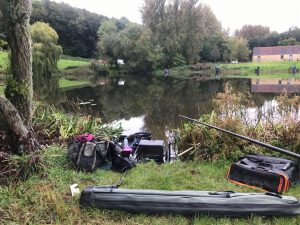 In most of the matches I’ve done well, I haven’t caught skimmers until the last couple of hours on the pole so I was going to feed that line and then fish the feeder for the first two hours when I would hopefully put a few fish in the net before bagging up on the pole – simples! I had Terry ‘The Toast’ on peg 7 so we arranged a side bet and we also both had one with Steve P who was over on 21. With it still chucking it down, Terry introduced me to his rod bag condom, coming soon to a shop near you! 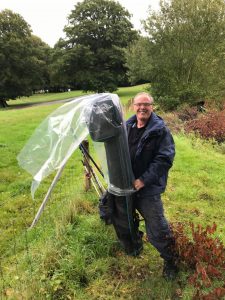 Keep your kit dry with the new Rod Bag Condom!

I only set up a feeder rod and a 4 x 16 Preston Chianti to fish two lines, both at 11.5 metres, left and right. For bait I had a pint and a half of casters, half a pint of maggots, corn, hemp plus some Bait-Tech Pro Natural Bream Dark that I’d mixed the night before. We were due to kick off at 10:00 but Terry wasn’t quite ready so I gave him another ten minutes during which time he suffered a fair bit of grief from around the pond with Big Frank (who was actually set up in time for once) leading the abuse!

Finally underway I put in six large feederfuls of groundbait packed with corn and casters at around 30 metres before cupping in three balls on both pole lines before finishing off with a potful of casters, corn and hemp. I changed my feeder over to a 20 gram Guru X-Change Open End, put on a hooklength with a hair-rigged quick stop, baited up with a grain of corn and cast out, hitting the clip. Terry started with his ‘whooshy’ whip but it took him a while to catch and when he swung in a perch, it prompted me to say he was winning the match as I hadn’t seen anybody else have a fish yet but he said Rob had already had a skimmer!

During the remainder of the first hour, my tip remained motionless, Terry ‘whooshed’ out some more perch and Rob lost a bream at the net so there were a few about and I was still feeling quite confident. Looking around the pond, there didn’t seem to be much happening, just the odd small fish being caught. I cupped in another ball of groundbait on my pole lines and would try them after two hours.

The second hour was also pretty uneventful for me, I had a couple of rattles on the tip but no positive indications and as Rob hadn’t had any more on the feeder, I decided to have a look on the pole. With corn on the hook, I tried the left hand line first and toss potted in some casters and corn. No indications after half and hour on either line and my earlier confidence was starting to wane!

We reached the halfway point and I was still blanking but I stuck at it as in previous matches the skimmers haven’t turned up until the last couple of hours and with not much being caught, two or three skimbobs wouldn’t be far away today. I started getting the odd little dig on the float and it felt like there were some fish there, then a few minutes later, the float buried and the strike met with solid resistance, I shipped back gently before slipping the net under a nice skimmer around 1.5lb to get me off the mark.

Next put in I missed a good bite but at least there were some fish there and I really thought I’d get a few more. I went back out but no more positive bites and then Terry had two skimmers in fairly quick succession to put him firmly in the driving seat and I hoped I hadn’t missed my chance. Another hour passed with no more positive bites, just the odd little knock. Jake turned up to see how we were doing and said they were just getting the odd small fish on the other side with his dad catching on the waggler, while he was with me I missed a good bite and with an hour and half still to go, I still thought I might get a couple more.

I was sure these little dips on the float were skimmers so I tried single caster and had a roach first put in, I then dropped one off, missed a bite and had another small fish so that wasn’t really the answer, I also had another chuck on the feeder for ten minutes but not a sniff, back on the pole and time was running out. With about ten minutes to go I noticed Fieldy strike into a big fish, he was taking his time with it but as he started shipping back, the hook pulled! I shouted the all out before taking my kit back to the car and getting the scales.

Steve P had chucked back after having a nightmare when his pole snapped as he was trying to get some sections apart, worse still, he’d have to pay me a pound when I reckon he’d thrown back more than I caught! Dave P on peg 20 had loads of fish including some chunky perch for 4lb 2oz and I didn’t think he’d be far away with that, Frank had lots of small fish for 2lb 4oz and then Gordon weighed 3lb 4oz on peg 18 so it had been really hard going. 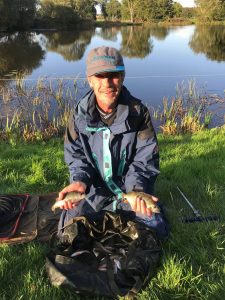 Dave had some chunky perch plus roach for 4lb 2oz 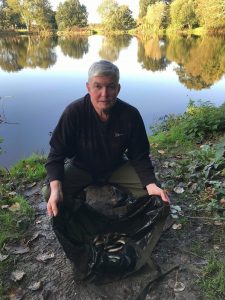 Next up was Fieldy on peg 9 and that lost fish was costly as he had 3lb 3oz, Rob weighed 1lb 15oz and was cursing that bream that had come off near the start and then Terry ‘Whoosher’ Morgan put the winning catch on the scales with 4lb 15oz. My skimmer and two roach went 1lb 13oz and I was second from last again (it would have been last if Steve hadn’t chucked back!). So although it had been tough going, several people had chances to win, Fieldy and Rob both lost match winning fish and I missed two good bites on corn. 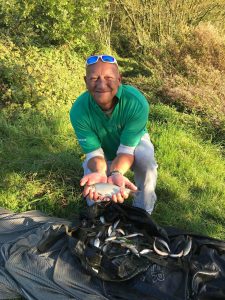 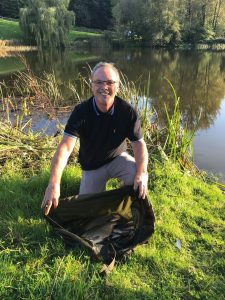 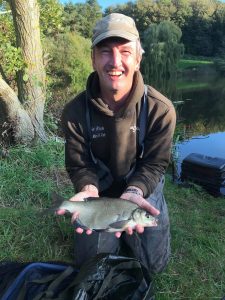 I had one skimmer and two roach for 1lb 13oz

I’d really enjoyed the previous four matches on the pond but I didn’t enjoy this one at all and I know others felt the same but I got it so wrong on so many levels today, I’m still kicking myself two days later! With the benefit of hindsight (my favourite word), if I’d fished for roach I’m sure I could have done 6-7lb but then again if I’d have scaled down on the skimmer rigs I might have had a couple more bites. I should have realised the pond was fishing really hard and not been as stubborn/lazy/blinkered (delete as appropriate). But then again if I’d hit those two bites I’d have been congratulating myself for sticking to my guns and having complete faith in my methods! All part and parcel of what makes match fishing so fascinating and addictive, no two days the same.

Check Out – My latest trip (below)