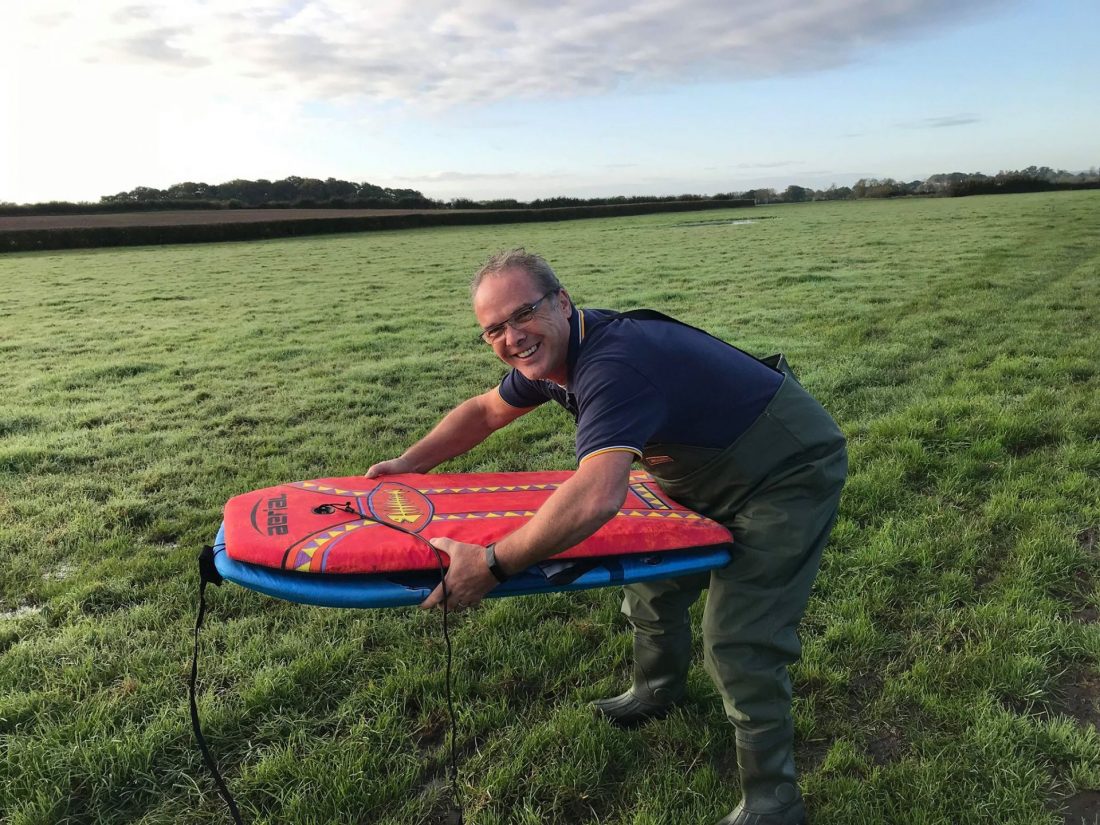 For round two we were fishing a different stretch of the Isle at Midelney, it always looks nice and people had been reporting lots of fish topping when they’d walked it. Earlier in the week it was doubtful we’d get anywhere near the river once again after more heavy rain, but as the week went on, the forecast began to look more and more favourable. I picked Terry ‘The Toast’ up Saturday afternoon and we went to have a look, the river was well up and coloured but looked nice with the odd fish topping although due to the level, where you normally sit was very boggy and could make it difficult to get our boxes near enough to the river to actually fish! I’d conveniently left my wellies in the car so Terry had to keep venturing down into the swamp-like conditions to check it out!

I kept checking the river levels all evening and waking up Sunday morning the data was showing the level had dropped a good half a metre since we’d looked at it the day before, so it should be nigh on perfect. We had a decent turnout of twelve for this one including Avalon Fisheries owner and Mosella boss, Vic Bush, who I’d bumped into in Somerset Angling recently and he said he fancied having a go on the river. I announced the draw and although nobody really knew what to expect today, as always, the end pegs were fancied to do well. With the stretch being quite narrow and featureless, I expected either the first few pegs above the bridge to do well or there was the possibility we’d walk the fish up the river as we headed to our pegs.

Fieldy drew the far end peg and nearly ran out the door and then Tony Newman pulled out peg 1, Vic was next door on peg 2 and I said that was spot on, with just two balls left and Paul Adams and me to draw, I asked him to grab one for me and was happy when he handed me peg 3 which left him with number 10. We headed to the river and it had dropped further still which would make getting our boxes set up a lot easier although Terry ‘Book, ’em, Danno’ Morgan had come prepared! 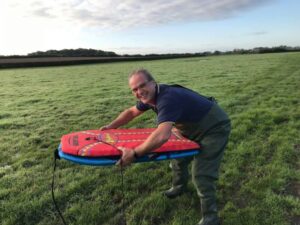 If it’s not Rod Bag Condoms, it’s Surf Board Platforms for our very own Mr Morgan (forget Preston, we’ve got Terry’s Innovations!)

There was a little bit of confusion as there were actually two peg 3’s and with Gordon on peg 4 (or the second peg 3!), he was giving me a lot of grief even though it was ‘Hawaii Five-O’ Morgan who’d been in charge of the pegs! The river was pushing through but there were some fish topping and a pike moving about and I said to Vic I had no clue how this was going to go and it could be a complete disaster, he said 2lb might be a good weight today. 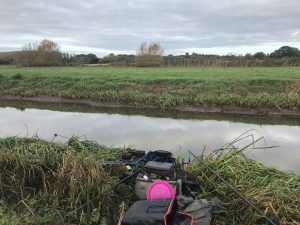 It had dropped a fair bit overnight as the mud bank and reeds you can see on the far side were underwater the day before!

I set up a 1.5 gram DH13 to fish three sections to hand and a 2 gram version to fish with a short line to give me another option. On the side tray, I had casters, maggots and hemp plus some Bait-Tech Pro Nat Dark which I’d mixed the night before. Plumbing up I had a decent depth of around three foot down the middle but there was quite a bit of weed present and I snagged up several times as I dragged the plummet around. I got us underway and cupped in three balls of groundbait in the middle and started on the to hand rig with single red maggot on the hook, holding back and inching the float through, it dragged under a couple of times as I hooked weed and I was just starting to think my disaster prophecy could come true when I saw Vic strike and he netted a nice roach.

Next run through, my float buried and I had a chunky little chublet, Vic had another fish and then Digger up on peg 5 landed a decent chublet and it felt like there were a lot of fish which prompted Vic to say we ought to revise the 2lb estimate. My next fish was a dace followed by a roach and then a bleak, I was feeding hemp and caster in the middle but also trickling a few casters in down the inside where a couple of fish had topped earlier. Digger netted another chublet and Gordon had a couple of small fish but I couldn’t really see how anybody above them was doing.

I was getting regular bites from mainly small roach with odd better one amongst them, Vic was also catching well and I could see Tony swinging in fish down on peg 1 but as the first hour came to a close, I was expecting bites to slow up at any time but if anything, sport was getting better and I found a sweet spot in the swim where I could almost predict when the float was going to go under and I had spells of getting a fish a chuck. As we passed the halfway point I was up to 78 fish for around 5lb but bites were starting to show signs of slowing, I didn’t think there was much between me and Vic at this point but then he swapped from the whip to the stick float and had a good run of fish.

Frank walked down from peg 8 and said most people were struggling with Fieldy on the end peg probably winning the top section with a couple of decent chublets. I was now only getting odd fish, I’d tried caster and bronze maggot but could only catch on single red, I started feeding the odd nugget of groundbait and also added another section of pole to search further down the peg and a quick couple of fish had me thinking perhaps they’d backed off but then I couldn’t get a bite again. The inside line resulted in a single roach and I couldn’t get a bite on the heavier rig whereas Vic was still getting a fish a chuck and Tony landed a decent roach but he was also suffering some pike trouble.

With about an hour to go, I missed a good bite on the inside then next chuck, the float buried and the strike met with solid resistance, for a moment I thought I was snagged but then it moved and it felt like a decent fish, I could see it was a nice perch around 12oz and Jake, who had turned up to see how we were doing, videoed me landing it (check it out on the blogs Facebook page). Not long after, Vic landed a similar sized perch and with some more net roach as well, he was looking good for the win in his first match with us.

I carried on putting odd fish in the net and ended up with 94 fish which I thought would give me 6-7lb, I knew Vic had comfortably beaten me but I thought it was going to be close between me and Tony. I packed up and went and got the scales before walking up to start the weigh in with Fieldy, he had three decent chublets and a few bits for 2lb 1oz, Dave (aka William Tell) didn’t weigh on peg 11 but had an eventful day when he hooked the far bank and as he shipped back, his top kit flew off like an arrow and stuck in the far bank! He did manage to retrieve it safely though. 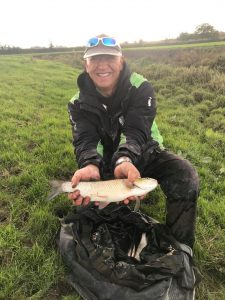 Fieldy won his section with some nice chublets for 2lb 1oz

Paul Adams had 4oz and then Terry ‘Point Break’ Morgan on peg 9 had 5oz so I’d won my pound back from last week and then Frank and Ian Burton didn’t weigh before Steve P had 3oz (and paid me a nugget). Digger had some decent chublets for 2lb 1oz and then Gordon had 5oz of mainly small fish. I was next and my fish went 7lb 7oz which wasn’t far off my guesstimate before Vic had a lovely net of fish for 13lb 9oz and last but not least was Tony who had some nice roach and lots of small fish for 4lb 9oz and third place on the day. 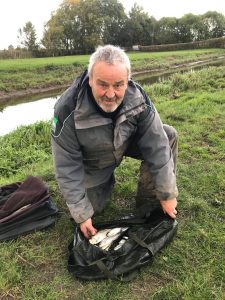 Digger had 2lb 1oz of chublets to win our section 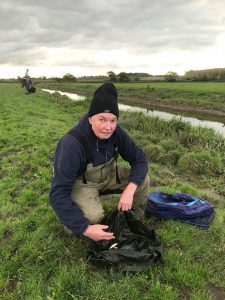 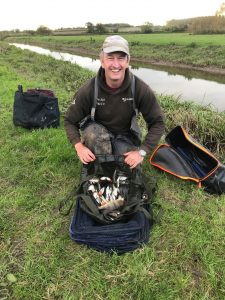 Plenty of bites, 94 fish for 7lb 7oz and second place 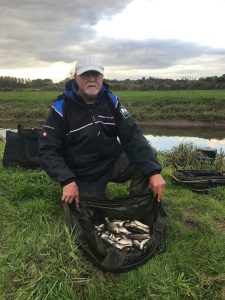 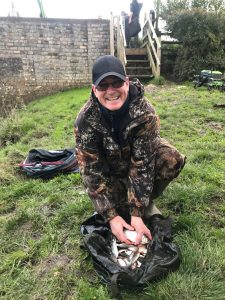 Tony had 4lb 9oz which included some quality roach

So after a disappointing few weeks, it was nice to catch some fish and I had a nice pick up of £61 (plus £2 in side bets) but on the down side, it was a bit gutting that the whole stretch didn’t fish a bit better although it was still worth trying (and that’s what this league is all about after all). It does seem to be that a lot of these lower stretches all conform to the same formula of the first three or four pegs by the bridge holding the lion’s share of the fish. It seems to apply to Hambridge and Midelney on the Isle and Muchelney on the Parrett but not Isle Brewers, which may be down to other features like bends or bushes but then again, below the bridge at Midelney, all the swims have inviting looking cover on the far bank but only the first four swims seem to produce! An interesting subject and we’ll never know all the answers which is why we love fishing so much!