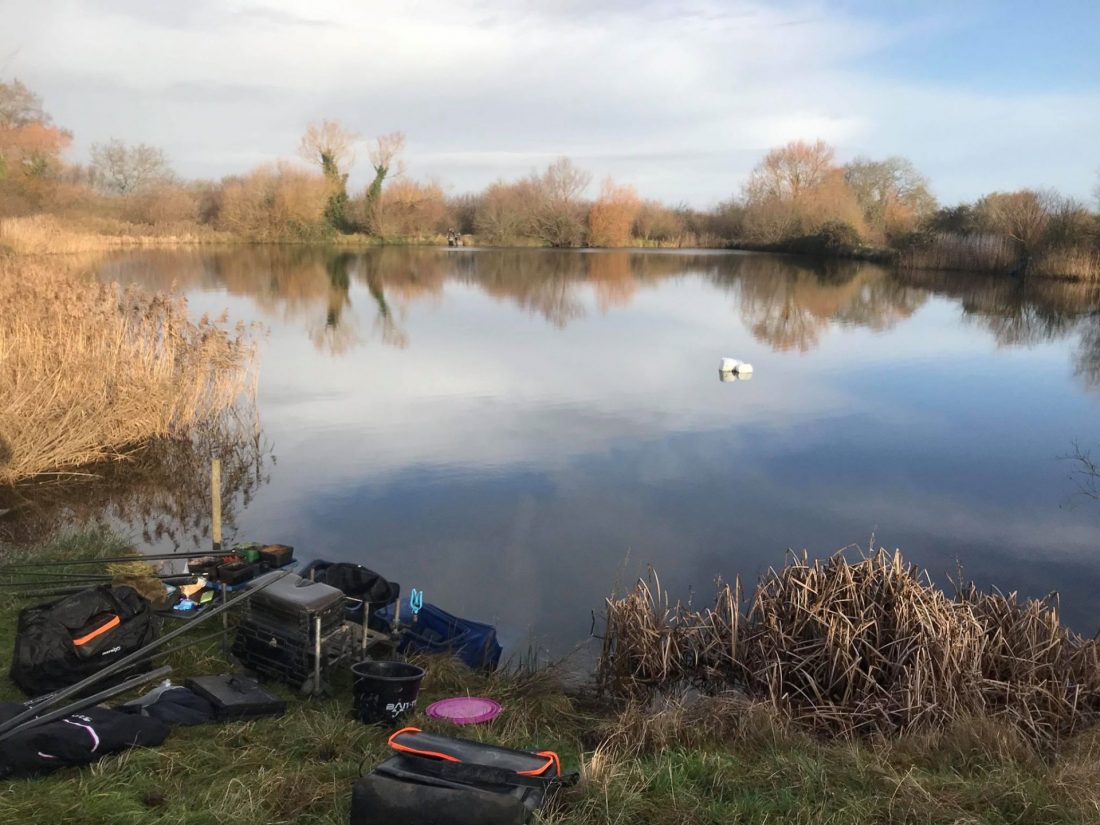 Earlier in the week I had thought there was a really good chance of us fishing the Xmas Fayre on the river but loads of rain as we approached the weekend soon put paid to that. As I was fishing Todber on Saturday, Hurf and Rob said they’d have a look and let me know what the state of play was. To be honest it was no surprise when Rob phoned to say the river was nearly bank high so we would be on the ponds again with the anglers split between Dillington and Hebditch’s.

I was up bright and early and when I got to the bowling club there were already a fair few people there and it was great to see ex-blogger Russell Hilton fishing his first match with us and Andy Welch and Fred Brown who always fish the Xmas Fayre. Baz Morgan had very kindly put up £100 and brought along the Chris Patten Memorial Trophy for the winner. To date there have been four winners of that trophy,

With the winner almost certain to come from Hebditch’s I asked him if he wanted to split the money between the two venues but he said it was for the top weight so with the superpool we would pay out the top two on each lake. After everybody had arrived and eaten I announced the draw and as people started delving into the bucket, it seemed most people were pulling out pegs with ‘H’ on them, with only a few balls left I asked Hurf to draw for me and to make sure I was at Hebditch’s, he slowly opened his fingers before saying ‘You jammy b****r’ and dropping a ball marked H4 on the table. It’s the best peg on the pond and has won more matches than any other, we’ve been fishing the pond for four years since 2016 and I’ve never drawn it and now (after thirteen attempts) I finally had my chance!.

According to some, the match was already won but I’ve been around long enough to know fishing isn’t always as cut and dried as that. The pond can be a moody beast and one match on a really cold day, only two anglers caught with one small carp enough for second place. We arrived at the pond and after all the rain the track was really muddy and Tony Newman nearly got stuck so reversed out only to hit Steve P’s van! There wasn’t too much damage but not a great start to the day for either of them!

My peg looked really nice with a large bed of reeds on the left, Paul Adams was on the other side of it and I had Digger on my right. I set up a 0.4 gram Drennan Carp with 0.12mm to a size 16 B911 and also a 0.6 gram Guru Wire Pinger (not used). On today’s side tray, I had maggots, dead maggots and pinkies, micros, corn plus Bait-Tech Special G Dark. 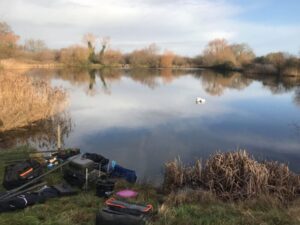 I got us underway and cupped in a modest amount of micros plus a couple of grains of corn at 10 metres to my left but not too close to the reeds and then two balls of groundbait containing some dead pinkies at the same distance but angled to my right. I started on the left hand line with corn on the hook and was lifting and dropping the rig regularly to try and entice some interest. Twenty minutes passed without an indication and I hadn’t seen anybody catch yet, I switched to the right hand line and after a further five minutes, the float buried only for me to miss it and I hoped I wasn’t going to regret that!

After another ten minutes and no more interest, I tried the left hand line again but still nothing and with thoughts of blanking on the best peg on the pond beginning to cross my mind, I started inching the rig closer and closer to the reeds where I hadn’t fed anything and finally I laid the rig in, it settled and then went under. This time I connected with it and carefully played a nice carp around 3lb to get off the mark. I missed another bite before catching carp number two and it felt like there were a few fish there but then of course I couldn’t get a bite!

Paul Homewood up on peg 9 had landed a carp and lost one so there wasn’t much in it and I needed another fish from somewhere, the left hand line was still barren so I went to the groundbait line where I was tapping in a few maggots, the rig settled and went straight under as carp number three made a bid for freedom. Numbers four and five came from by the reeds and it was definitely a case of not staying on one line too long. The next fish came from the right hand line and didn’t feel like a carp and a nice chub around a pound came to the net.

There were a few roach being caught around the pond but not very many carp so I was doing alright at this stage but I wasn’t counting any chickens yet. Ben Simmonds on peg 6 shouted across that he’d heard from Hurf at Dillington and it was fishing really hard there with just a few small roach being caught. I was finding if I tapped in a tiny bit of bait on one line and left it while I fished the other lines, when I dropped back in on it, I’d get a bite quite quickly. On the left hand line, I started getting some little indications and had my first carp from there, I also struck into a fish that wasn’t on long and came back with a scale on the hook. Digger landed a carp to go with his roach and as far as I could tell, only me, Paul and Digger had caught carp so far.

I tried double dead red maggots a couple of times but never had a bite with all my fish coming to a single grain of corn, as the match went on, I started to get more indications from the line I’d fed with micros and although I wasn’t exactly bagging up, I was getting regular bites and got to ten fish (nine carp and that chub) which I thought would give me around 28lb (as the carp average 3lb apiece). My last fish came just before the end and it was another chub around the pound mark and they’ve really packed on the weight as the last one I caught a few matches back was only 6oz!

I shouted the all out and as we started packing up it chucked it down with hail stones – nice! As I took my kit back, I met Tony who had the scales, Baz hadn’t caught on peg 2, Paul A on 3 had managed to find some roach and weighed 12oz, I was next and my two chub went 1lb 14oz and after two weighs my carp went 29lb 6oz to give me a total of 31lb 4oz. Digger had 3lb 14oz on peg 5 and then Ben had 11oz of roach, Steve P’s day hadn’t improved as he didn’t have a bite all match! 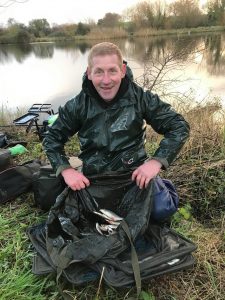 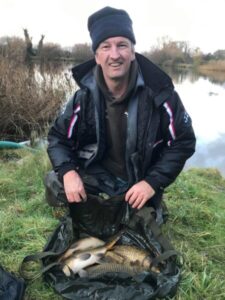 I had nine carp and two chub for 31lb 4oz 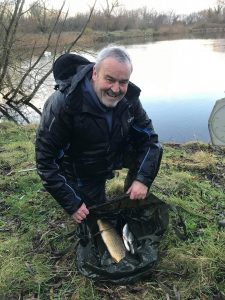 Digger had a carp and some roach for 3lb 14oz 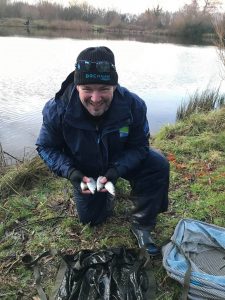 Paul H on peg 9 had a carp and some roach so it was going to be close for second on the lake, his roach went 8oz before the carp weighed 3lb 14oz to give him 4lb 6oz and then last but not least was Tony who had one roach for 2oz. We loaded up the cars and then Steve’s day got even worse when he couldn’t get his van out, a few of us tried pushing which didn’t work but then Paul A came to the rescue when he managed to tow him out, cheers mate. 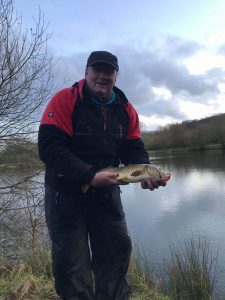 Paul was second on the lake with 4lb 6oz 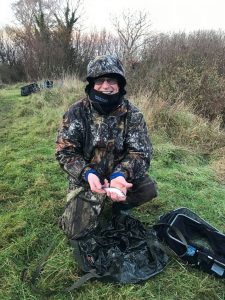 Tony had a 2oz roach from peg 1

Back at the results and Dillington had fished really hard with Scott Russell winning the lake with 74 roach for 3lb 2oz, Russell Hilton had done well to finish second with 3lb of small fish and Frank was third out there with 1lb 8oz. Most people only weighed in ounces although Fred and Andy W both lost big fish. Thanks to Jake Woodard for the photos* 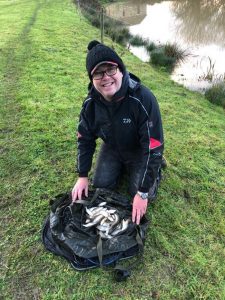 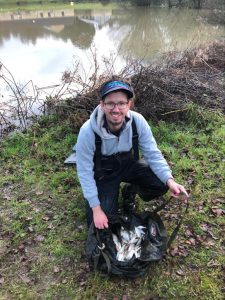 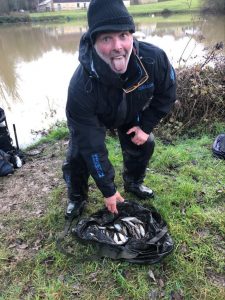 Frank was third at Dillington with 1lb 8oz*

We all enjoyed a nice buffet at the bowling club before the results and I was confirmed as the winner of the Chris Patten Xmas Fayre and I was over the moon to be the first person to win the trophy for the second time and a very nice pick up of £100 was a lovely bonus. Thanks to Rob Cox for the photo** 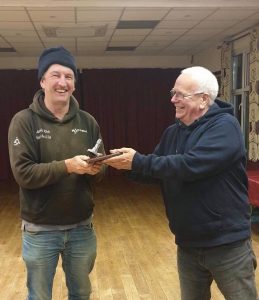 Chris’s great friend, Baz Morgan presented me with the trophy**

It was then on to the prize giving and I chose a lovely big piece of stilton, a selection of cheeses and a big box of biscuits. As always in this match we donate the peg fees to charity and as Harry had let us fish his pond, we gave them to him for the British Heart Foundation, a brilliant cause.

Before I go, there are several people I have to say a huge thanks to, Rob Cox for getting all the prizes, it’s a massive help and really appreciated, Baz Morgan for very kindly sponsoring the match, the Hebditch family for allowing us to use the pond and Hurf for pegging it, Drew at Ilminster Bowling Club for looking after us all through the year and last but definitely not least, all the anglers for making it a great event. I did have to chuckle when Hurf asked Tony when he was fishing next so we could make sure he had plenty of room in the car park!

Next Sunday it’s round four of the V.E.S. Precision league if we can get on the river although with the weather we’re having I’m not sure we’ll ever get on the Isle again!