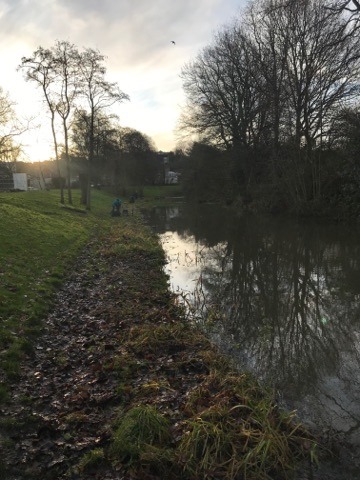 With the crazy amount of rain we’ve been getting I don’t think anyone expected to get on the river this week and we went from having nine or ten booked in to just six and when I walked into the bowling club on Sunday morning we were down to just four, so a knock up then! For a change we thought we’d give the canal a go so after an excellent breakfast we headed down there and it looked really nice, coloured with lots of small fish topping. We had a quick walk up through and decided on the pegs we were going to use before doing the draw, Steve P pulled out fancied peg 1 but then Terry had peg 14 and there had been a ball left in the bucket after last week so we had to re-draw (sorry Steve!). Second time around, Steve ended up on peg 2 with Terry on 3 and I asked Andy to draw for me and he handed me peg 1 (thanks Andy and sorry again Steve!) which left Andy on peg 4. 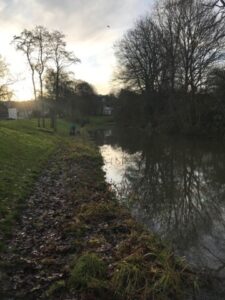 Looking up the canal from the bottom end

It would be silvers only as you’re not allowed carp in keepnets and we were going to fish five hours today. I set up a 0.3 gram NG Mini Gimp to fish down the middle by some weeds and a Drennan Squatt to fish at 11.5 metres across to my right towards some far bank reeds, I chopped up some worms and had a coffee before wandering up to see how the others were getting on and to ask if they fancied a Xmas nugget of course!

Back on my box, I shouted the all in and cupped in a dollop of chopped worm with a few casters and pinkies on both lines before starting on the shorter line with single red maggot on the hook. The float settled, dipped and went straight under as a small perch took the bait, next chuck a positive bite resulted in more elastic coming out and I netted a nice 4oz roach to get off to a great start. I looked up and saw Steve net a fish which turned out to be a carp which went straight back but when he had another next chuck, his day was going from bad to worse (sorry Steve!).

A couple more dumpy little perch followed so I slipped on a caster to see if I could get some better quality, I had a couple of knocks before catching a small roach. The next bite resulted in loads of elastic coming out and I knew it would be a small carp before landing one about 8oz and I hoped they weren’t going to as much of a nuisance for me as they were already being for my neighbour (sorry Steve!). I went back to single maggot but bites had slowed up although I was still getting the odd chunky perch, some which I netted rather than risk swinging them and had another nice roach of 3oz or so.

After an hour I had thirteen fish for around a pound and a quarter but it was difficult to gauge how I was doing as I could see the others swinging in small fish and netting fish regularly but were they carp or silvers? I wanted to leave the longer line for as long as possible so kept plugging away putting perch and the odd small roach in the net. Approaching the two hour mark, bites on the shorter line had dried right up so I put in a little more chopped worm and went across to 11.5 metres for the first time. A few minutes passed and then the float buried with yellow hydro streaming from the pole tip on the strike, another little carp. I had a perch next put in but then the next two fish were carp and I could understand Steve’s frustration as he’d probably chucked back 8 or 9 carp already.

More carp followed from 4-8oz but as I was also getting the odd 3oz perch, I stuck at it, the annoying thing about the carp is that several times I’ve hooked one and thought it was a decent roach, skimmer or perch as I shipped back, only to be disappointed when a mini vermin surfaced! I had another run of fish from the shorter line but it didn’t last long and when I went back across it was the same story, I did catch my first skimmer which was all of an ounce! In amongst the carp Steve had a couple of half decent skimmers and there are some proper ones in the canal so a bonus fish could make all the difference today.

Going into the last half an hour, bites were now few and far between, I did manage my second skimmer of around 2oz from the longer line and when I shouted the all out, my clicker was reading 42 fish (perch, roach and those two skimmers) which I thought would give me around 3lb, I’d also chucked back around 10 carp and poor Mr Parker had thrown back 19 (and lost a few as well) which would have easily been enough to win if they’d counted (sorry Steve!).

It started raining as we packed up (which was nice!), I took some of my kit back to car and collected the scales. As I walked up to Andy, Terry was admitting to 2lb and then Andy said he had the same, pulling his net out he had some half decent skimmers plus roach and perch and the needle just crept past the three to settle on 3lb 1oz. Terry had more roach and only a couple of little skimmers to weigh 2lb 10oz before Steve had three or four skimmers plus a couple of small fish for 1lb 6oz. Then it was my turn and I was sure it was going to be close but Terry called it at 3lb 11oz. It was noticeable that Andy and Steve’s nets were mainly skimmers, Terry’s was mostly roach and mine was made up of nearly all perch. 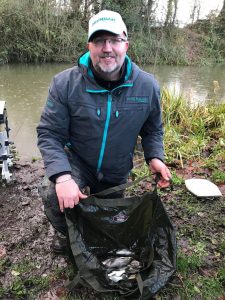 Andy had quite a few little skimmers for 3lb 1oz 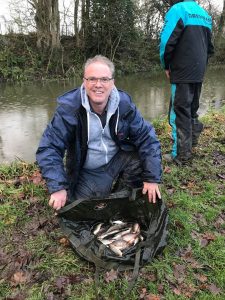 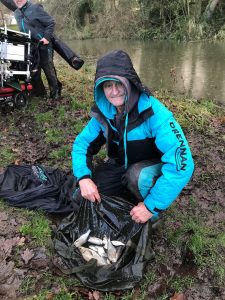 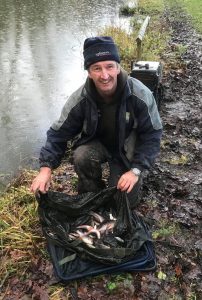 I had 3lb 11oz which included lots of perch

I always enjoy fishing the canal, it’s a lovely little venue that can be very hard but there are always bites to be had if you work for your fish. Along with picking up £50 for winning I collected all three nuggets so a really nice day for my last outing before Xmas.

I’ve got lots of stuff planned for the next week or so, a great interview which will be live in the next few days, three matches in three days on three very different venues (weather permitting!) and my look back at 2019 plus I might even squeeze a little review in as well!

Before I go, I would like to wish everybody who reads the blog a very Merry Xmas, it’s been a great year and I’ve had loads of amazing feedback, as always please get in touch and let me know what you do and don’t like, any suggestions for future content welcome, send me your catch reports and if anybody wants to write a guest post, I’d love to put it on the blog. I’ve had some brilliant articles submitted and they’ve been very well received, hopefully I’ll have some more interviews coming your way and if any shops or brands would like to advertise or collaborate, I’d love to hear from you.