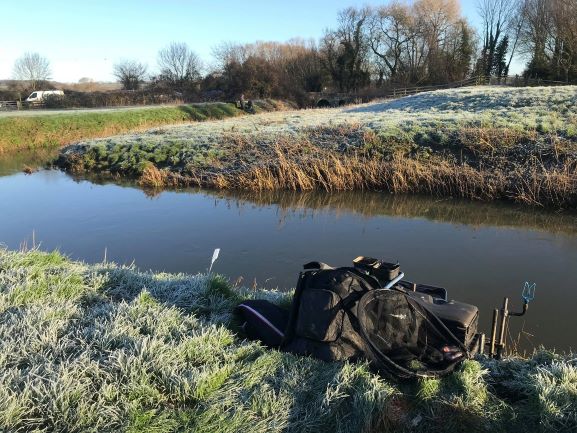 With loads of rain in the week and the river flooded yet again, I was mentally preparing myself for a bit of a grueller on the pond, especially after we’d had a couple of hard frosts. As the weekend approached, the rain stopped and with hardly any on Friday and none forecast for Saturday and Sunday, it was looking like we might actually get on the river. This then presented me with a different kind of headache as I wasn’t sure where I was going to put everyone because at one stage it was looking like I’d need to find 23 pegs! Thankfully when I spoke to Dan on Saturday to confirm numbers, he said they were bringing 11 anglers and as we had 8, it should be a bit more manageable.

I drove down to peg it and at Coxes it was still a little pacy but by the following day, it should be spot on, down at Isle Brewers, it had a nice colour to it but I didn’t see any fish top until I got to Redbridge where there were quite a few fish moving about, mainly in peg 108. Sunday morning arrived and with it, another rock hard frost, I had loads to do and wanted to get to the bowling club early, only to discover our heating had packed up! I have to say a massive thanks to Scott Jackson who popped over and sorted it, you are an absolute star mate!

When I got to the bowling club, it was already busy and it was great to see the Taunton lads again. I announced the draw and everybody delved into the bucket with the inevitable grins and grimaces as people pulled their pegs. I asked Dan to grab a peg for me (as his drawing arm is legendary) but was disappointed when he handed me 124a, don’t get me wrong, it can be a decent peg and there were definitely worse pegs in the bucket but it hasn’t done a lot this season so far. Dan on the other hand had drawn peg 120, one of the six pegs I fancied to do well today, (I reckon he draws with his right hand but used his left to draw mine!).

Looking at the pegs we’d drawn, Ilminster were in trouble, we had four anglers at Coxes which normally struggles to compete with the lower end of the river, Steve Parker was on 111 at Redbridge, me on 124a, Digger on 128 (which can be good but has gone off the boil and only did 1lb 6oz in the last match) and Nick on H4 which seems to be the poor relation to the pegs on the other side of the bridge. Taunton had Dan on 120, Tony Cinicola on 125, Kev Williams on 126, Paul Purchase on H5 and Gappy on H6. The other peg I really fancied was 108 but it hasn’t been in for ages so a bit of an unknown quantity and Steve Priddle was on that one. 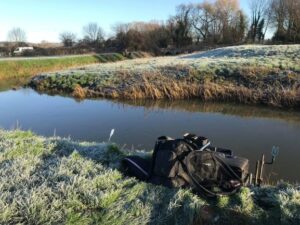 Arriving at the river, it looked nice although the colour had dropped out and it was still fairly pacy. I set up a 1.5 gram DH13 to fish down the middle and a 0.6 gram DH16 to fish across. On the side tray I had a pint of casters, red and bronze maggots plus some Bait-Tech Super Seed Hemp. I shouted the all in and started down the middle with single red maggot on the hook, I snagged up twice in as many chucks so went across with the lighter rig and double maggot where a positive bite resulted in a tiny minnow. A switch to caster didn’t improve things and minnows were already being a pain.

After about twenty minutes I finally caught a tiny roach but was already a long way behind Tony below me on 125 who was getting a fish a bung. I had a slightly better roach of 2oz or so followed by a gudgeon and although I was definitely not bagging, at least I was starting to get the odd fish and there’s always the chance of a chub or two in this peg. I should have known better because after another gudgeon, I couldn’t get a bite!

After about an hour, Monkey walked down from 123 and said he’d only had minnows and so had James on 124 above me so it seemed like it was fishing really hard. I plumbed up a section off the far bank where it was a little deeper and had a tiny roach quite quickly but then lost two on the trot before catching a nice dace but one again the ‘action’ was short lived. Hurf phoned from peg 17 and said it was a real struggle up there as well, not long after, Terry ‘The Toast’ arrived and reported that Paul Purchase and Gappy were catching well on H5 and H6 at Hambridge. As for our section he said Kev Williams below the bridge on 126 was bagging, Chris Parr on 129 had a 3lb chub but not much else and Kedgy on 129a and Digger on 128 were both having an early bath.

I struggled on putting the very occasional small roach in the net, hoping that elusive chub might still put in appearance but my confidence was starting to ebb away. There’s not really much more I can say, I went through the motions for the remainder of the match and when I shouted the all out, I knew my grand total of 14 fish (roach, gudgeon and a single dace) plus a few minnows wouldn’t go a pound! After packing up, I collected the scales and went down the start the weigh in with Chris who had caught another two chub on really light gear to weigh 7lb 3oz, a great weight from there on the day, Kedgy and Digger had gone and then Kev had a lovely net of fish which pulled the needle round to 19lb 8oz. 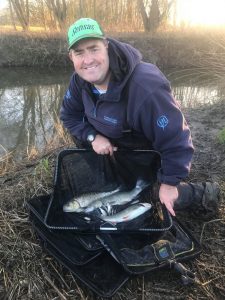 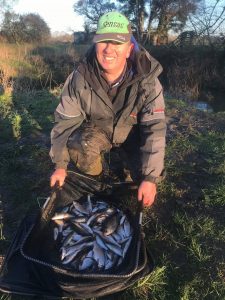 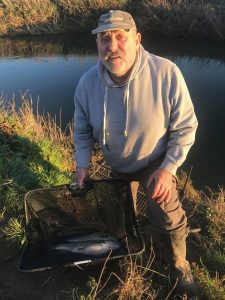 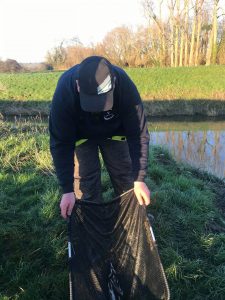 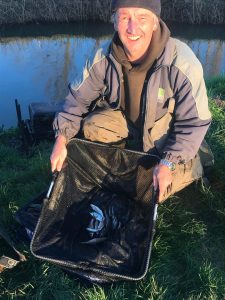 My haul of fish dragged the needle round for a massive 14oz! 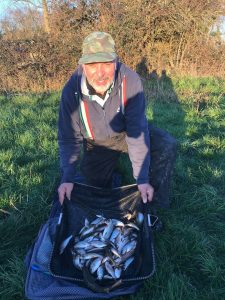 Back at the bowling club for the results and looking at the weigh sheets things hadn’t been any better for us in the other sections and we’d been well and truly spanked on our home water! At Hambridge Gappy (Taunton) had 7lb 8oz which included a 4lb plus chub, Paul Purchase (Taunton) had 11lb 15oz while Nick didn’t weigh on H4. Redbridge saw a cracking weight for Steve Priddle (Taunton) on 108 with 16lb 14oz of roach and a big chub, Dan Baldwin (Taunton) had 12lb 4oz from 120 and Steve P (Ilminster) was our best performer with a nice chub of 3lb 3oz which took a nugget off me. At Coxes it had been awful, Hoffy (Ilminster) was top there with 1lb 9oz followed by Tony Goodland (Taunton) with 15oz, Hurf (Ilminster) 10oz (and paid me a squid), Ian Burton (Taunton supersub) DNW and Baz Morgan (Ilminster) DNFP (Did Not Fancy Peg). Thanks to Paul Purchase*, Dan Baldwin** and Steve Hurford*** for the photos. 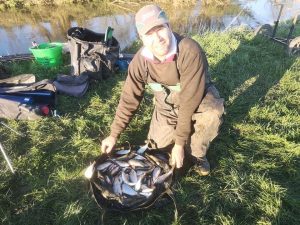 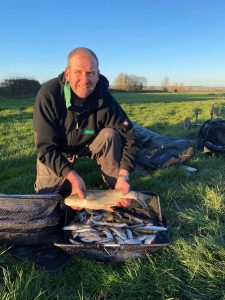 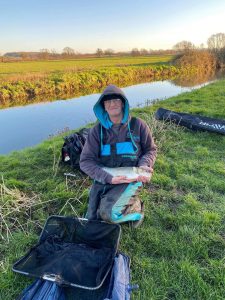 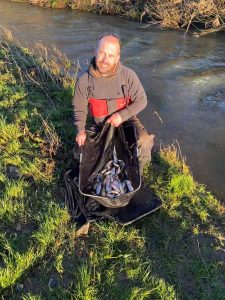 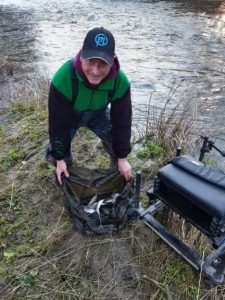 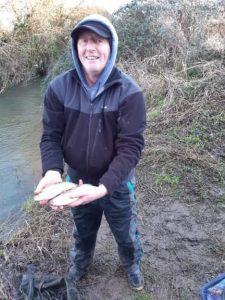 Tony Goodland had two chublets for 15oz from peg 15*** 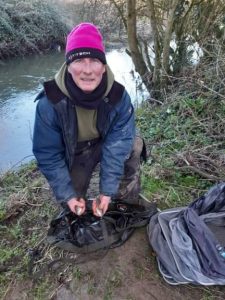 So with our weights totted up (which didn’t take long!) compared to the top eight weights of Taunton the final score was Taunton (94lb 15oz) – Ilminster (6lb 4oz) a pretty hefty battering!

So some excellent weights from the usual pegs but it really is frustrating, it was pleasing to see 108 chuck up a cracking weight but I could put it in next match and it’ll probably blank! Look at 128, it did 23lb of roach a couple of weeks back and then it’s like the swim is devoid of fish! It was encouraging to see some chub caught/hooked in 123, 124 and 129 and I’m sure there were chub in my peg too, I’m just not good enough to hook them!

It does seem like the colder it gets the more the bridge syndrome comes into play but surely virtually every roach in the river can’t be by the bridges? I also think more swims at Redbridge would produce but we’re a bit limited with the parking and we’ve tried new pegs a few times although it’s very hit and miss. I would also dearly love to try the Hatch House stretch but we’re running out of weekends and it’s that catch 22 situation all the time, we can’t keep hammering the same pegs every week and need to try new swims and new areas but we won’t know which pegs are good and bad until we try them. The trouble is when you try a new stretch and people struggle, people get fed up and won’t come back, I wish I had the answer!

The first few times we ever fished Hambridge, the results were pretty underwhelming but after a few attempts, it started producing some brilliant bags of fish with numerous 20lb plus weights and one match I had 13lb from the swim four above the bridge and was only fifth in the section! But after a couple of good seasons, the weights have dropped off again, it’s still good fishing with lots of bites but now 12-15lb is a good weight and it only seems to be the first two pegs below (and sometimes the first one above) that do well, where have all the big roach gone, is it predation, being overfished or is it something else, quite often it goes in cycles but do we never try any other peg down there again? Coxes can fish quite well early doors and some decent weights (6-8lb) are recorded but as soon as there’s a frost, it seems to be pointless putting it in, the fish can’t go anywhere so why don’t they feed?

Trying to make sense of it makes your head spin but it’s interesting stuff, maybe I’ll explore it in a later post. Next week it’s the return fixture against Taunton and it’s looking like we’ll get on the Tone, a river I’ve not fished for years, I better get some stick floats and where did I put those rods and reels!!!