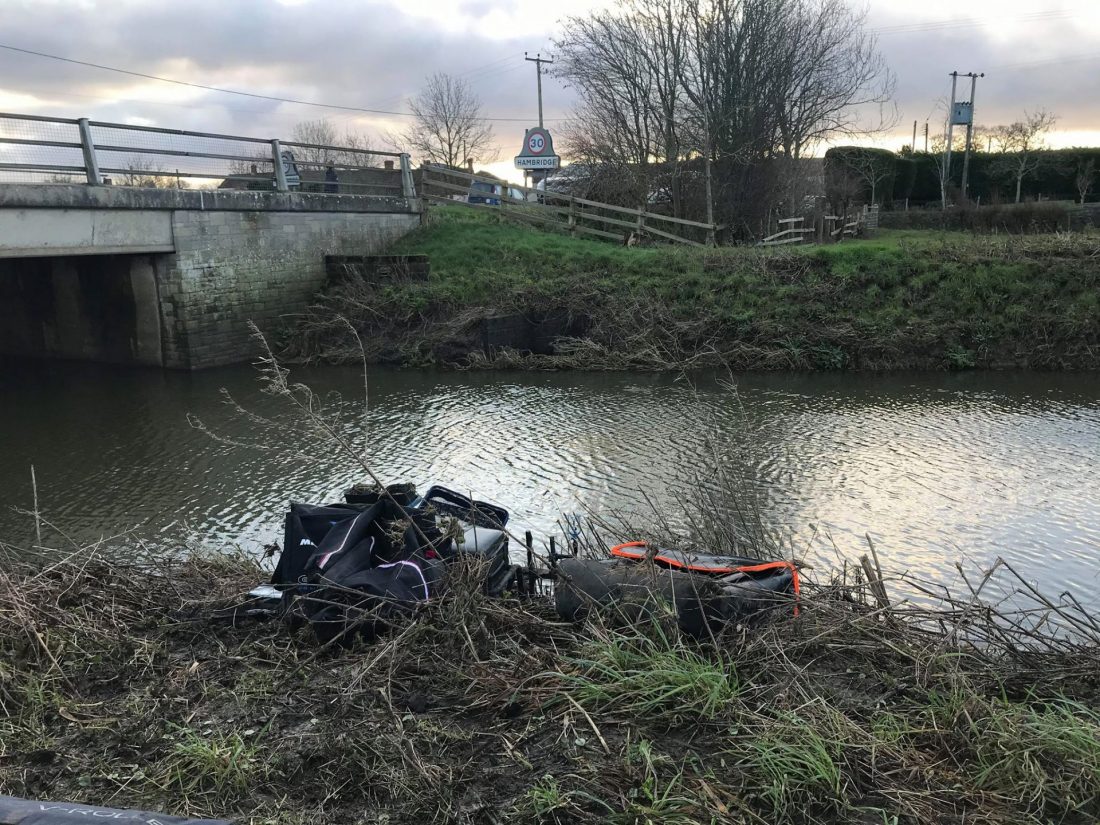 Once again the weather was kind to us and after being high in the week, the river looked spot on Saturday when I popped down to have a look and I have to say a massive thanks to Rob Cox who cut out the pegs at Hambridge. Sunday morning arrived and there was a decent turnout of 13 for this one including Karl Aplin fishing his first match with us for ages, Vic Bush and even Hoffy had his passport stamped to cross the border from Chard!

I announced the draw and with a few balls left I asked Rob to draw for me and he pulled out H4, the same peg I had in the last V.E.S. match when I weighed 8lb 7oz and was 6oz off framing. Two other anglers who hadn’t moved very far were Ian Burton who was on H6 for the second time in three matches (and he was on H5 in the other one!) and Steve P who had been on H6 last match and was now in H5! Elsewhere Vic was on 125 with Digger in Barney’s Bend and both pegs had looked really nice yesterday and are normally there or thereabouts.

We got to the river and I had Karl above me on H3 which was in for the first time for a while and as I was getting my kit to the peg, a decent fish topped between our pegs which I hoped was a good sign as we hadn’t seen anything move when we walked the river the day before. I set up a 1 gram bodied float to fish three sections to hand and a 0.6 gram DH16 to fish across. On the side tray I had a pint and a half of casters, red and bronze maggots plus some Bait-Tech Super Seed Hemp. 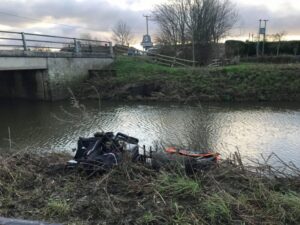 I was on H4 again

Shouting the all in, I flicked the rig out with single maggot on the hook and fully expected to catch straight away but after running the rig through several times without a bite, I was beginning to fear the worst but then after ten minutes the float dipped and I swung in a small roach. More small roach followed so I tried double maggot and started getting some chunky roach in amongst the smaller fish. Steve P below me was catching as well but was also getting a lot of small fish.

After an hour I had 31 fish for around 2lb and it felt like there were a lot fish in the peg, I slipped on a caster and had a couple of 2oz roach before the float slid away and the strike connected with a better fish which turned out to be a cracking roach of 8oz or so. At that point I thought a big weight was on the cards but then my bites just faded away and I spent too long trying to catch on caster. I only added 21 fish in the second hour so went back to maggot and had a little flurry of fish but it was short lived. Adding a section wasn’t really the answer either and I only had a couple of fish and much like the last time I was here, there was still quite a bit of weed about and I lost several hooklengths.

Gordon Aplin turned up to see how we were getting on and I had a couple of roach while he was with me but my catch rate was still going in the wrong direction, he popped up to see Karl and on his return said he was really struggling and had only caught a couple of small fish. He went down to see how the others were doing and when he got back he said they were catching but lots of small fish and although I wasn’t bagging I was getting the odd better fish and felt like I was doing okay.

I kept catching in spells and they just wouldn’t settle, I added more sections, tried further down the peg and also across with the lighter rig but it was a case of catching a couple of fish and then trying something else. Karl came down a couple of times and he hadn’t added to his early fish and now couldn’t buy a bite. I reached 107 fish (mainly roach with the odd bleak and small dace) and after a decent start I was rather limping towards the finish line but then typically as the light started to fade, the fish switched on and I had 15 in the last twenty minutes. 122 fish would give me around 8lb at an ounce apiece but I was hoping my fish averaged a little more and was sure I had double figures, maybe 11-12lb but didn’t think it would be any good as I was expecting 15-20lb to come from Isle Brewers.

Karl didn’t bother weighing and conceded the pound so I took my kit back to the car and collected the scales, as I reached Steve he started his usual ‘I’ve only got eyeballs, no proper fish’ malarkey and then Ian said he’d struggled for a couple of pounds but when he pulled his net out there was rather a lot of splashing! The needle pulled round to 12lb which has to be one of the worst guesstimates I’ve ever witnessed! Then Steve had a nice net of fish for 8lb 14oz, as we walked back up to my peg, I still thought I’d beaten Steve and that I might be close to Ian. I pulled my net out and all of a sudden I wasn’t so sure, into the weigh sling and 8lb 10oz was called so ‘The Pole’ had taken a nugget and a point off me. 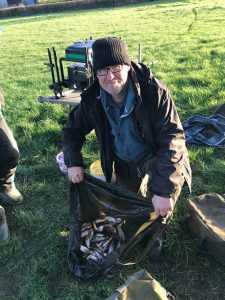 Ian’s 2lb became 12lb when he pulled his net out! 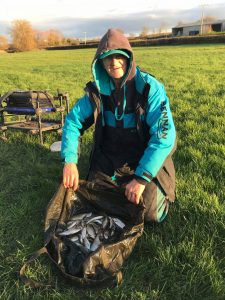 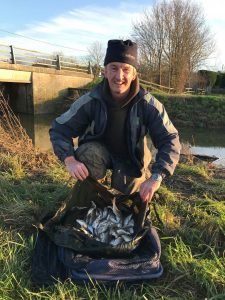 Back at the results and the river hadn’t fished as well as expected and the top weight at Isle Brewers was Digger with 11lb 7oz from 126 followed by Vic with 9lb 14oz from 125. Although it had actually been close between the leading weights, quite a few struggled, Ben had 3lb 6oz from 124, Terry on 124a weighed 2lb 2oz, Baz had 1lb 6oz from 128 and then Frank (123), Rob (129a) and Leighton (129) didn’t weigh. Hoffy won the top section with 5lb from 120 and Steve P won our section so that’s twice I’ve drawn H4 and both times I’ve missed out on an envelope by ounces! To be fair I haven’t fished a great match and I’m sure if I’d have fished maggot all day I wouldn’t have been far away. Thanks to Terry Morgan* and Phil Denslow** for the photos. 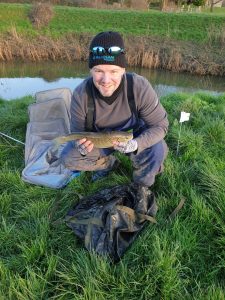 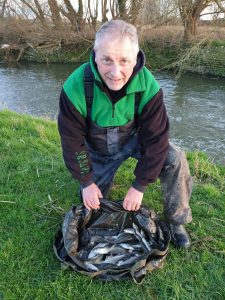 Hoffy won the top section with 5lb from 120* 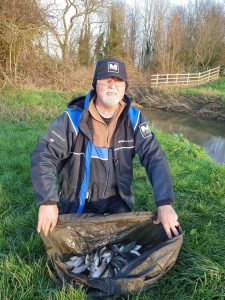 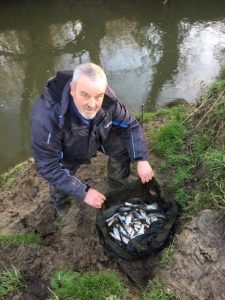 Digger was second with 11lb 7oz from Barney’s Bend**

After four matches and dropping the worst result, the V.E.S. Precision League looks like this,

So the framing pegs (top three) from all the river matches so far are as follows,

If you like your natural venue fishing, there are some great matches coming up, there’s the Somerset Angling Pairs League

Substitute anglers will be allowed but at least one of the registered pair must fish each leg. I have every intention of fishing the KSD should it be up and coloured, if it becomes unfishable I will use the canal as the reserve venue on the same date, a decision made by the preceding Thursday if necessary.

Please book in at the shop (01278 431777) to express an interest, money (£70 a pair) will be required no later than 25th Jan 2020 to confirm place. PLEASE NOTE – maximum numbers will be dictated by the amount of pegs fishable at Durleigh therefore places will only be confirmed by payment of entry fees – first paid first served.

Also Somerset Angling’s Simon Garbutt is running some Wednesday matches on natural venues, £10 all in, if you’re interested, call the shop on 01278 431777.