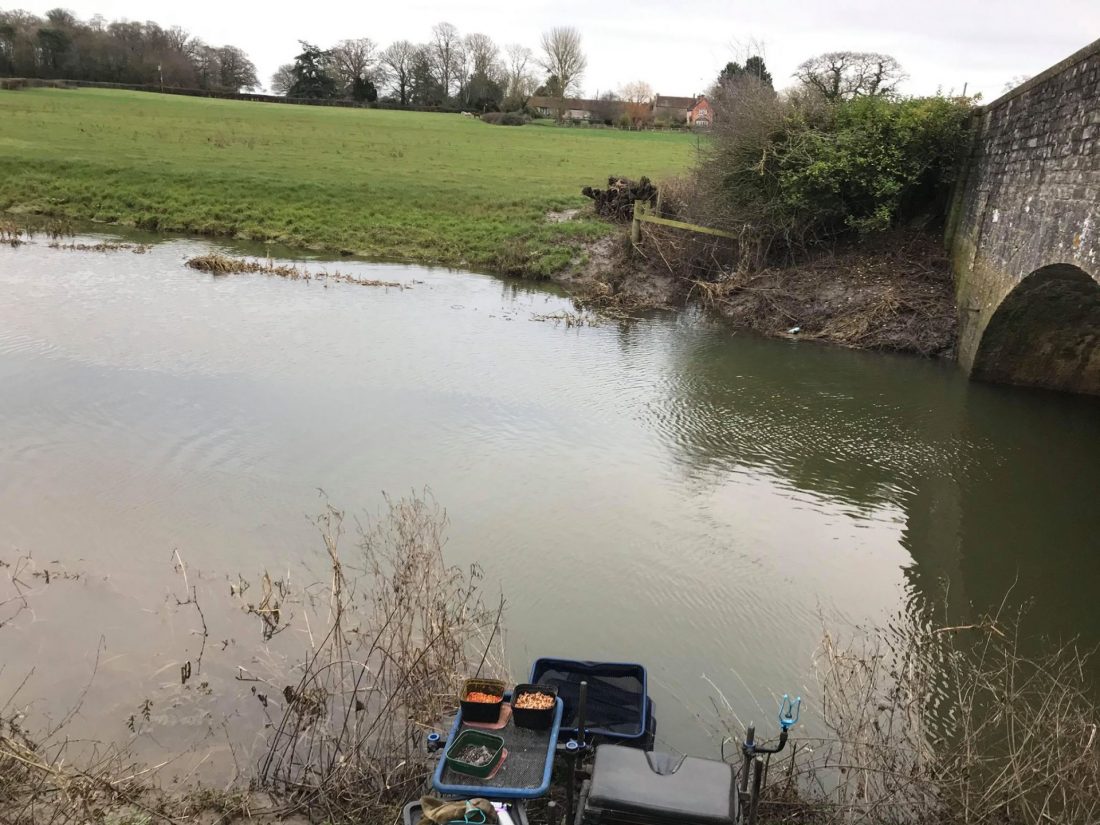 With hardly any rain towards the end of the week, the river should have been nigh on perfect but with so much water about it was dropping painfully slowly and once again it was touch and go whether we’d actually be able to fish it. I popped down on the Saturday to have a look and at Midelney it was high but looked nice and three pleasure anglers were catching some decent roach, at Muchelney, it was almost bank high but still fishable and there were loads of fish topping.

In the morning and after a cracking brekkie at the bowling club, the general consensus was that people wanted to fish the river. I really fancied another go at Muchelney but when Baz drew for me he handed with peg 1, just below the bridge at Midelney and if I’m honest I didn’t really fancy it, Steve P was on 2 with Baz on 3. Andy Saunders drew the peg at Muchelney where I won the last time and Digger was just below the canoe launching stage where there was some slacker water and the day before there had been loads of fish topping. Terry and Paul were both above the bridge there with ‘The Toast’ on the peg he had 20lb from in the last match and I thought there would be some big weights again today.

When we got to the river, it was still quite high but looked nice although as we took our kit to the pegs, it was noticeable there weren’t many fish topping. I set up a 1.5 gram DH13 and a 1 gram bodied float to fish three sections to hand, both had Guru Pole Special Ready Rigs, size 18 to 0.10mm, nice looking hooks but they look a big 18! On the side tray I had a pint and a half of casters, red and bronze maggots, hemp plus some Bait-Tech Pro Nat Extra and Dark that I’d mixed the previous evening. 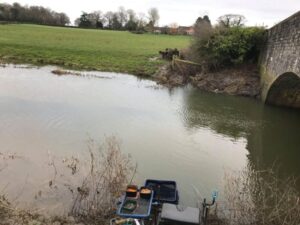 I shouted the all in and boshed in four big jaffas containing, hemp, casters and maggots and started with a single red maggot on the hook. It took a few run throughs to get a bite and I swung in a small roach, some more tiny fish followed but it wasn’t the fish fest I was expecting, Steve and Baz were also getting odd small fish but it was looking like being hard compared to the last match here. In amongst the tiny roach, I had a couple of better ones that required netting and after an hour I had 21 fish for about a 1lb 4oz.

I had a text from Andy saying Digger had canoes launching from the platform and also that it was hard going up there and Terry hadn’t had a bite yet, although I wasn’t sure whether to believe him or not! Going into the second hour, I just wasn’t getting many bites and when Baz had a nice chub approaching 2lb to put him firmly in the driving seat, I needed to do something else. I added a section and had a run of fish but I also snagged up a couple of times so I buried the hook in a caster and started getting the odd better fish including a 3oz perch.

Dave S turned up to see how we were doing and while he was with me, I was holding back on the inside down the peg, the float buried and the strike was met with solid resistance, I played it carefully and a nice perch of 12oz or so put me back within touching distance of Baz, next chuck I had lovely 8oz roach and things were starting to get interesting. Steve P was catching quite a few small fish including several ruffe and Baz was getting odd roach but we all seemed to be catching in spells.

I hooked another decent fish which I think may have been a perch but it came off and I couldn’t buy a bite again, I stuck on another section and flicked the rig out towards the far bank and had two decent roach in two chucks and thought I’d found them but it was short lived. Then Frank turned up for a walk round and I had a couple of smaller roach across but bites were now few and far between. I went back down the middle with double red maggot and had another perch of 3oz along with a couple of small roach and I was having to chase the fish around.

Steve was still catching small fish and was now up to seven ruffe! which prompted Baz to ask him ‘ruffely’ what weight he had! I went back across and had a nice roach followed by a dace but could only seem to get two fish at a time before having to rest it. Down the middle again I was getting the odd small fish on maggot and did hook a better roach but as I shipped back it went solid as a pike grabbed it, I played it for ages before a 4oz roach was spat out with a big gash down it’s side and although it was still alive, the prognosis wasn’t good!

For the rest of the match I swapped between fishing down the middle with double red maggot and across with single caster, I was getting odd fish but did lose a decent roach when the hooklength just gave way! Going into the last hour I thought sport might pick up but if anything it died a death and when I shouted the all out, my clicker was reading 53 fish which I thought would go around 6-7lb if they averaged 2oz apiece. I packed my kit up and took it back to the car before grabbing the scales to start with Baz, he had 6lb 3oz which included lots of small fish, some decent roach and that chub, Steve ‘The Ruffe Master’ had 2lb 10oz. Then it was my turn and I hoped I’d done just enough, Steve called it at 8lb 8oz but as Terry was also in our section, I’d have to wait until the others got back to see if I scored one or two league points. 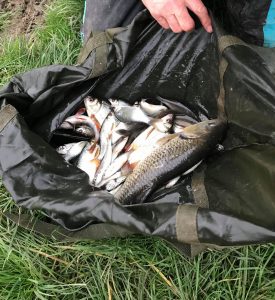 Baz had 6lb 3oz which included a nice chub 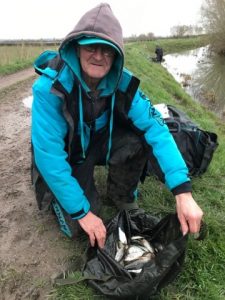 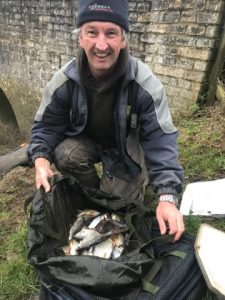 I had some quality fish on caster for 8lb 8oz

As the others got back from Muchelney, Andy had the top weight there with 11lb 10oz which included a nice 3lb chub but then Digger had the next best weight with 5lb 11oz followed by Paul with 3lb 11oz and then the Toast with 1lb 10oz so I actually ended up second and picked up £35 plus nuggets off Steve and Terry but I did lose one to Andy. In hindsight I wish I’d set up a lighter rig to fish tight across where there was some steadier water as I think that might have got me a few more fish. Thanks to Terry Morgan for the photos* 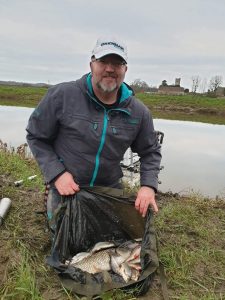 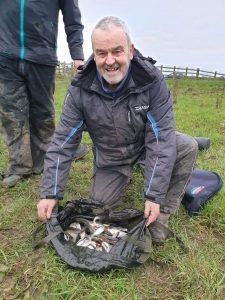 Digger had 5lb 11oz despite having Boaty McBoatface in his peg!* 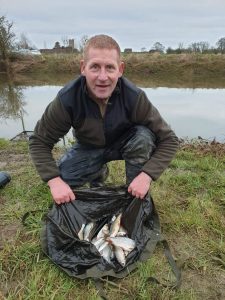 Paul had 3lb 11oz above the bridge* 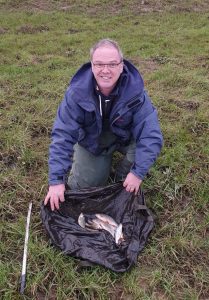 Today’s section win for Andy, means he has one hand on the title, mathematically he could still be caught in the last match but it’s very unlikely, he just needs to catch a fish and not finish last in his section. Also for somebody who doesn’t like rivers, he’s finished first and second in his last two matches and had 34lb of quality fish, what’s not to like!!!!

After six matches and dropping the worst result, the Warehouse League looks like this,