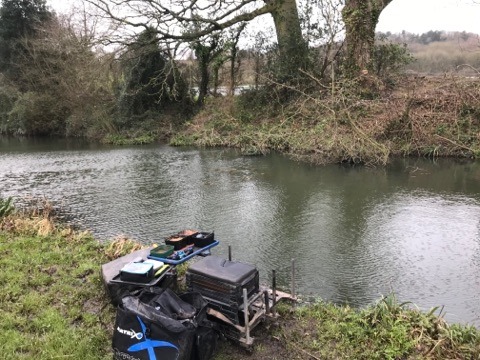 Before I get on to this weeks match, I had some very sad news on Saturday when Martin Heard phoned me to say that Malcolm Levy had passed away last Wednesday aged 84. I’ve known Malcolm or ‘The Old Fossil’ as he was affectionately known for getting on for twenty years, he used to travel with Martin and they made for a very funny double act. They used to fish loads of matches on the Isle, Dillington and the canal and were always there or thereabouts, I remember we once tied for first place in the Ilminster and Chard combined open on the river with 12lb 8oz. He was a top angler and formidable force on the Trent and then the Huntspill when he moved down South, I was talking to Keith Arthur recently who said Malcolm gave their team loads of info on the waggler as they went on to win the Div 3 National. I fancy I’m writing too many of these type of posts lately and I don’t like it. RIP mate. 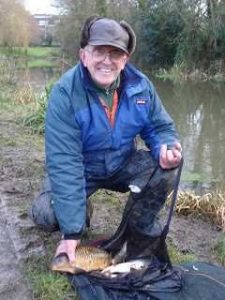 Malcolm with another match winning catch

Martin asked if I’d put something on the blog and I thought it would be nice if he shared a few words,

‘I had some really bad news this week, sadly my old fishing pal Malcolm Levy passed away on Wednesday, I have had the privilege of knowing Malcolm for over 40 years, and have been blessed with many fond memories of ‘The Old Fossil’, as he was affectionately known. I started fishing with him when I was around 18 years old and when he was in his prime he was one of the best match anglers I have ever seen, very astute at reading the water, feeding, and the absolute detail in his approach to match angling, we had many jaunts all around this country, team fishing for Enterprise Angling, Clevedon Veals and Thyers.

Some say he was also ‘very thrifty’ and a couple of fond memories come to me, once when we were meeting up with John Dean for a long weekend on the Trent fishing for barbel, we had the first day with John then went looking for a pub/B&B near the river, we went in several before he agreed on one, I found out later he had agreed on this one because they had a two for one dinner offer over the weekend (he had earlier offered to buy us dinner, because I paid for the petrol!). We also booked a twin room therefore I had the pleasure of waking up to Malcolm’s teeth in a glass of water in the morning! We used to travel every week to the Isle in its heyday, Malcolm always picked up the casters, he would always have them split up into two different bags, mine never seemed to be as big as his bag and I always seemed to pay more. It took me ages to work this out as I was always running out and he seemed to always have plenty left!

He was a lovely man with a heart of gold as they say and I can honestly say in all the years I have known him I never once heard him raise his voice, have an argument, or have a bad word to say about anyone, angling is not all about the fishing, its about the companionship and making friends with like minded people

He was a great family man as well, having been married to Josie for 62 years, he was one of the old school, a real character and a gent, and I will sadly miss him.

I know many people will have very fond memories of Malcolm, if they want to, they are welcome to attend the funeral, details as follows,’

For this weeks V.E.S. League match, I decided to put it on the canal as the forecast was for loads of rain overnight and strong winds during the day. The last time we fished it we had loads of bites from roach, perch, skimmers and little carp so hopefully more of the same would be nice. We met at the bowling club for breakfast and there were only five booked in for this one as the league limps towards it’s climax, what a shame! After we’d eaten we drove the short distance to the canal and decided on which swims to use, it looked nice although there was no colour in it at all.

Announcing the draw I got Andy to pull a peg for me and was hoping to be on peg 5 (where I was the last time) but he handed me a ball with the number 2 on which was towards the top end and Andy was next door on the end peg. Dave P was on my right with Steve P next to him and Nick P was on the one I wanted. My swim certainly had plenty of options with some lilies to the left, two trees opposite and some reeds on the far bank to my right. I set up a 0.3 gram NG Mini Gimp to fish by the lilies and a Drennan Squatt to fish at 11.5 metres across to the reeds. On the side tray I had maggots, casters, worms, Bait-Tech Sticky Micros and some 2mm and 4mm expanders. 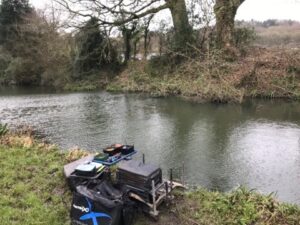 I got us underway and cupped in a small amount of chopped worm and caster by the lilies and a dollop over by the reeds before potting in some micros down the middle to my right. I started with single red maggot and fully expected to catch first put in as there are loads of little perch in the canal but the float just sat there! Neither of my neighbours had caught either but I still wasn’t overly worried as I was sure it was only a matter of time. Half an hour passed and the float hadn’t even wobbled, I didn’t want to go across too soon but Steve said that Nick had caught a perch and I just wanted to get a fish in the net. I picked up the other rig and laid the rig in by the reeds followed by a pinch of chopped worm from the toss pot and again I was sure the float would bury but again it just sat there!

An hour and a half in and I hadn’t had an indication of any kind and nor had Andy but then I noticed Dave shipping back very carefully before swinging in a small perch. He said he’d caught on worm so I nipped the head off a small dendra and tried by the lilies but not a sniff so I went over to the reeds and as the rig settled, there was a little dig on the float before it slid away, I struck and a little bit of elastic came out as I eased the pole back before swinging in a small perch – phew! I was sure I’d start to get a few now but despite trying all along the reeds, I’ve had no more bites so it was time for a quick wander as I needed a pee. Andy hadn’t had a bite yet, Dave had two small perch, Steve was blanking and Nick had one perch and was now sitting it out on corn for a bonus.

So it was rock hard but I still thought the odd fish would be caught (maybe in the golden last hour!), I went back to my peg and tried poking the rig between the lilies and the trees but got snagged and lost a hooklength, I also went over the micros with maggot and then a 2mm expander but not a sniff. Back across and I hoped the rest had done it some good but no bites and I couldn’t believe it was the same venue as just before Xmas when I’ve had bites all day!

With about two hours to go, the rain stopped, the wind died down and even the sun briefly showed itself, Max turned up to see how we were getting on and he was talking to Nick at the top of the bank when I had a little knock and then the float slid away, I couldn’t quite believe what I was seeing but miraculously I didn’t miss the bite and had my second small perch. Things got even better next chuck when I hooked a slightly better fish and netted a 3oz perch to be sure. I really thought we might start getting the odd fish now and I kept trying to raise spirits by saying we were approaching the golden last hour and a half, then golden last hour, then…… well you get the idea!

Going into the golden last five minutes, the scores on the doors were still the same, me with three perch, Dave with two, Nick had one and Steve and Andy were yet to get off the mark. Literally at last knockings, there was a bit of a kerfuffle when Nick struck and his elastic came out briefly followed by much swearing as he thought he’d lost a carp. That was the last of the excitement and shortly after I called the all out, what a disaster!

I packed up and went and got the scales before starting with Nick, he had a quality perch that went 4oz, Steve hadn’t caught and then Dave’s two fish went 3oz, my three perch registered 5oz and as Andy had blanked, I’d won and I honestly can’t recall ever winning a match with such a low weight before! 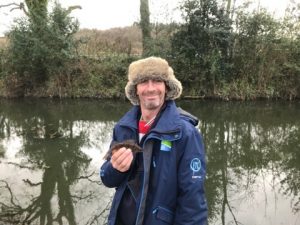 Nick had one perch for 4oz 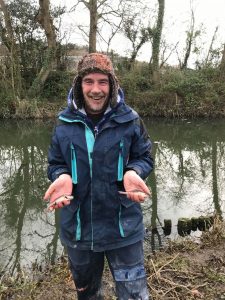 Dave had two for 3oz 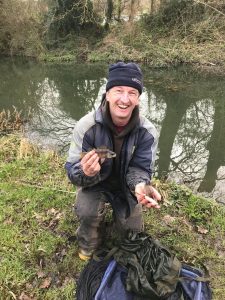 My three weighed a magnificent 5oz!

I picked up £50 for winning plus nuggets off Andy and Steve and with Ian not fishing today and Steve not catching, the league has tightened right up with three of us on 8 points and two rounds to go. The dates for the final two rounds are as follows,

After five matches and dropping the worst result, the V.E.S. Precision League looks like this,

I suppose it was a worthwhile exercise in that I was thinking about using the canal next week for Barney’s match which could have been dire with 7 or 8 anglers on it and half of them blanking! So now we’ll use Dillington and the Hebditch’s have very kindly allowed us to use their pond, there are no guarantees in fishing of course and I’ve fished matches at both venues where it has been hard going at this time of year but I feel this option offers the best chance of a decent match and if we can, we’ll leave the reed bed bung hole out.