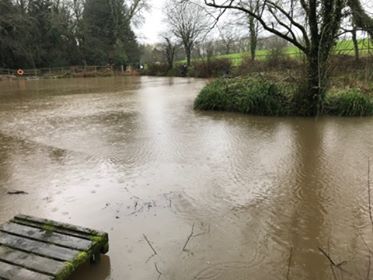 Well, this weekend was supposed to be a double header of matches I was really looking forward to, a silvers match at Todber sponsored by Drennan and then round five of the V.E.S. Precision league on the Sunday. With Storm Ciara causing chaos the previous weekend I was hoping we’d get lucky with the weather but oh no, the Met Office gave us the good news that Storm Dennis was now headed our way with more 50 mph winds! Firstly Todber cancelled their match and then with only two booked in for our match I called that off as well, I still wanted to get out somewhere and then a message from the Tart arrived saying a few of them were having a knock up at Sadborow and did I fancy it (it’s not very often I’m pleased to see a message from him but there’s a first time for everything!).

It was really rough Saturday night but waking up the following morning the wind had dropped and it wasn’t raining, so hopefully the worst had passed. I met the others at ‘Spoons for breakfast before heading off to the pond, the Tart decided on using the same pegs as the last time we fished it, 1, 2, 5, 7 and 8. He asked me to draw for him and I pulled out peg 1 which was where he was in the last match when he finished second. I ended up on peg 5 which is a really nice peg and I had loads of space with an empty peg to my left and two to my right.

As we took our kit to the pegs, the rain started coming down hard and the forecast was for most of the day – great! Rigs for today were a Drennan 0.4 gram Carp for the top two plus two and a 0.3 gram Drennan Margin Crystal for against the island, the edge to my left and up towards the inlet where it was virtually the same depth on all three lines. On the side tray I had maggots (dead and alive), corn, Bait-Tech Sticky Micros and some expanders. 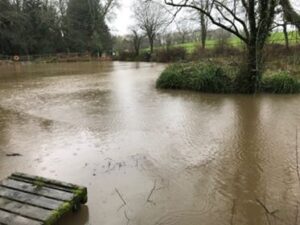 The pond had a tinge of colour to it!

The Tart got us underway and I potted in some micros plus a few grains of corn by the island and up by the inlet and then some dead reds on the short line before starting by the island with a piece of corn on the hook. Normally somebody hooks a fish quite quickly but after ten minutes nobody had caught which prompted the Tart to say it would be hard today. Then a positive bite resulted in a decent fish on and I safely netted a nice carp around 4lb to get off the mark, the Tart had one just after and then Jay-Jay on peg 2 had one as well. A couple of missed bites followed before I had my second, then a third and I was getting quite a few indications. I was feeding maggots on the short line but wanted to leave it as long as possible before trying it, a quick go up by the inlet only resulted in a missed bite and then I hooked another by the island but it came off as I shipped back.

After an hour Jay-Jay was leading with six carp and the Tart had four although when I asked how many he had, he said three but it might be four! (how can you lose count at three!!!). I was on three but the flow from the inlet pipe was speeding up with the incessant rain and hitting the island meaning I was struggling to get any kind of presentation and I was starting to wish I’d set a stick float up! The rain was freezing cold and I’ve had to put my gloves on for the first time in ages, Hoffy the birthday boy had to go back to the car as he was that cold his head gasket was in danger of going again!

Back up by the inlet, I’ve finally hooked a fish and it was a lump of a ghostie about 6lb but I was now a long way behind Jay-Jay, the Tart and Carl down on peg 8 who were all starting to catch well. With nearly two hours gone, the Hoff had enough and went for an early bath and I must admit I wasn’t enjoying myself very much either. It was now pointless fishing by the island or up by the inlet and with all the cold water coming in any self respecting carp would be as far away as possible. I came in on the shorter line earlier than I would have liked but still thought I might be able to put a run of fish together.

First put in with three dead maggots on the hook I had a lovely slow bite but the strike resulted in a small perch, I tried a 4mm expander and had a roach so put a grain of corn on and had another roach, I started upping the maggot feed and finally had a carp followed by a couple more but any thoughts of the greatest comeback of all time, soon disappeared when next chuck the float just sat there. The Tart was now flying and had gone into the lead but it was close for second between Jay-Jay and Carl.

I did manage one more carp on corn from the short line but was still going nowhere fast, I tried the inside lines to the left and right but no indications at all so I decided to start a new line, 11 metres to the left in open water where it was a fair bit deeper, I cupped in some (now very wet) micros and corn and left it for ten minutes while I fished short again. Trying my new line for the first time I missed a bite and then hooked a carp but as I shipped back it came off and then I lost the next one as well. Back out, the float sailed away but it didn’t feel like a carp and a lovely skimmer of 3lb slid into the net followed by a carp but once again the action was short lived.

With an hour left, the Tart was still catching well and on for a big weight while Carl and Jay-Jay were battling it out for second place whereas I was out of ideas and just going through the motions, I came back in on the short line but no bites in thirty minutes so I spent the last half an hour on the longer line again and did manage one more carp before the Tart called the all out. My final tally of ten carp and that skimmer for probably 30lb wouldn’t be any good today so I chucked back.

As I took my kit back to the car, Jay-Jay had weighed 66lb before the Tart had 102lb 4oz which was a cracking weight on the day and then Carl had 77lb for second place. Typically as we loaded the cars, the rain stopped, the skies cleared and even the bloody sun popped it’s head out – unbelievable! 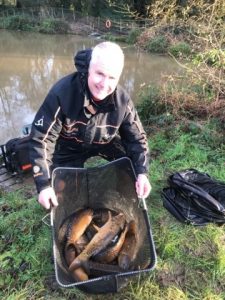 The Tart won with a brilliant 102lb 4oz

Next up – River Isle (if this weather ever lets up!)