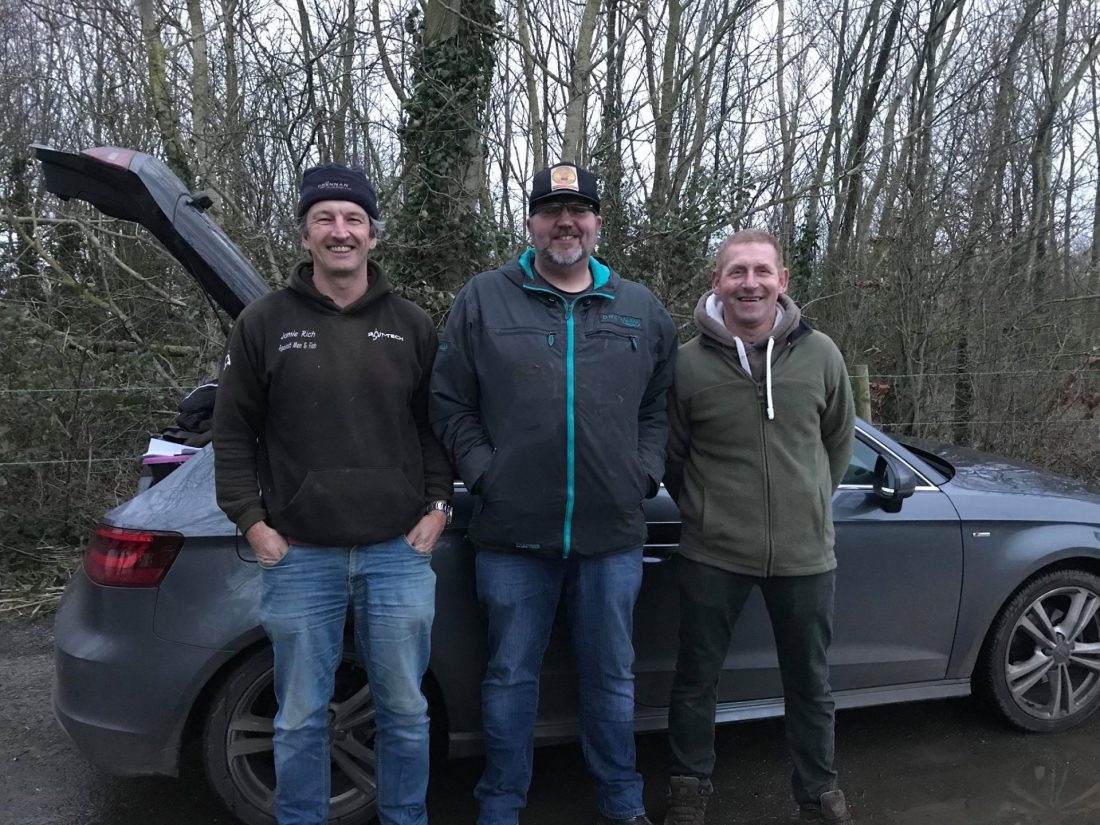 The final match of the Warehouse League arrived and Andy had one hand on the title with a three point cushion although with ten anglers booked in, mathematically he could be caught but would need to blow out big time. I was lying in second spot but with only two points between me and third, I could be overhauled as well, so all to play for. I popped down to have a look at Midelney and Muchelney on Saturday as they’re both cracking little stretches and normally guarantee plenty of bites. The levels were well down although the flow was quite pacy at both locations. At Muchelney there were loads of fish topping and Kev Francis was pleasure fishing above the bridge and getting a roach a chuck.

There was some rain forecast overnight but hopefully not enough to do too much damage (famous last words!). Waking up Sunday morning, the river level graphs weren’t showing much movement and with it being mild I thought we were in for a good day. At the bowling club, the banter was top notch over breakfast and with everybody fed and raring to go, I announced the draw. The usual scrum ensued and when Ian ‘Golden Arm’ Burton reached the bucket, I asked if he’d pull out a peg for me, he handed me number 9 which was two below the bridge at Muchelney where Andy had won the last match and I had 31lb the time before that, thanks Ian!

We headed off and when we arrived, thankfully there were no pleasure anglers and the river looked perfect with loads of fish topping. The only downside of these stretches is the thick glutinous mud, which makes the banks quite treacherous and coats everything in sticky gloop! Paul Adams was the first one below the bridge and Taunton’s Dan Baldwin was below me, Steve P was the first one above the bridge with Rob next door and Hoffy on the upstream end peg although he would be in with Midelney to make it five peg sections.

I set up a 1.5 gram DH13 to fish three sections to hand and also a 1 gram bodied float (not used), on the side tray I had a pint and a half of casters, red and bronze maggots, hemp plus some Bait-Tech Pro Nat Extra and Dark which is a superb mix for rivers. After several trips up and down the bank, getting my kit set up, my peg was already starting to resemble the Battle of the Somme! No peg photo this week as once I was ready there was no way I was getting off my box again so a photo of the devilishly handsome Dan Baldwin will have to do! Waiting for the off, I had a coffee and there were still fish topping all across the river between me and Paul although Dan said he hadn’t seen a fish move yet! 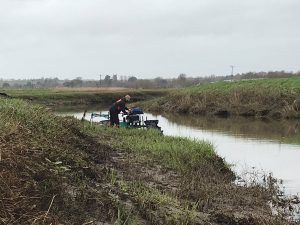 10:00 arrived and I shouted the all in before balling it with six big jaffas and starting with single red maggot on the hook, it took several run throughs before the float finally dipped and I swung in a small roach to get off the mark. It was a bite a chuck from small roach and I could see Paul catching as well, I tried double maggot and the next fish was a good roach, followed by another and it was solid! As always, I did my usual trick of swinging in a 6oz roach which slipped out of my hands, swung back out and dropped off! With half an hour gone I was up to 22 fish for around 4lb and as we were fishing six hours today, I had visions of doing a really big weight. Paul was catching lots of small fish but Dan hadn’t had a bite yet!

Then I ran the float through several times without a bite and something had changed, the pace had quickened and the level was starting to rise, was this last nights rain catching up with us or something else? I was still getting the odd decent roach but after a brilliant first half an hour, I only added six fish in the second thirty minutes. Paul was getting small roach, bleak and was well on his way to being crowned this week’s ruffe master with several of the proud little beasts already.

Hoffy walked across the bridge to get some more boots as he’d got stuck in the mud and had to get Rob to help pull him out, leaving his wellies behind in the process! To make matters worse, he’d also lost a big perch! I plodded on putting the odd roach in the net but the river was still coming up and there was more and more rubbish getting washed down as well. Dan had finally caught a couple of small fish and also taken a phone call from Ian at Midelney who’d had to move his box back up the bank, he was admitting to a pound and said they were really struggling there.

As we passed the half way mark I was still getting the odd fish from tight to the near bank where there was a bit of steadier water and along with the roach, I had several small ruffe and a gudgeon so not exactly bagging anymore! Rob wandered down from above the bridge and said he’d had a nice roach first chuck but was now struggling for the odd small fish, Steve ‘The Poacher’ Parker was now running a stick float down under the bridge to just above Paul. Although not as many now, there were still odd fish topping across where there was a back eddy so I stuck on some more sections and went to 14.5 metres, any visions of bagging up soon disappeared and I only had one decent roach that was hooked under the chin!

Finally with around two hours to go, it looked like the river had stopped rising after coming up around eight inches during the day but it wasn’t going to drop enough in the remaining time to salvage the day although I shouted down to Dan that we were heading towards ‘The Golden Last Hour!’ I had a poo emoji text from Andy so I replied asking how they were doing and he said it was dire but was he telling the truth?? Nick also phoned and said he’d only had a couple of fish from peg 3 and so had Dave on peg 1.

Dan was starting to put a few fish together and Paul was still staking his claim to be the undisputed Ruffe King of the world, I had my first little skimmer but after such a promising start, I rather limped towards the finish line. I shouted the all out and my clicker was reading 77 fish which I thought would go 7-8lb. After packing up, I took some of my mud caked kit back to the car before going up to watch the weigh in a get some photos. Hoffy had 3lb 4oz mostly caught in the first hour but there was no rescuing his boots which were now underwater!, Rob had chucked back and gone and then ‘The Poacher’ Parker had 10oz. 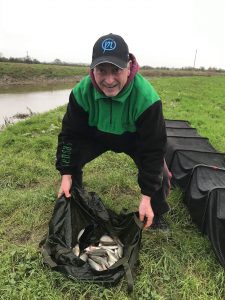 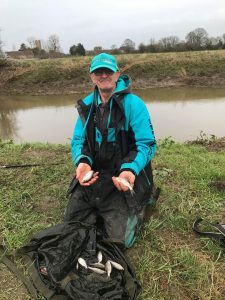 The Poacher had 10oz from peg 7

Paul was next and had loads of small fish for 3lb 9oz, then it was my turn and after sliding down the bank and crawling back up with my net I weighed a level 9lb, Dan had caught well towards the end of the match and had lots of small fish for 5lb. So I’d won my section and we headed back to Midelney to see how the others had done, Ian had the top weight there with 4lb and Andy was second in the section with 3lb 6oz which would see him take the league title, well done mate. Nick and Dave had both struggled for 3oz and 2oz. 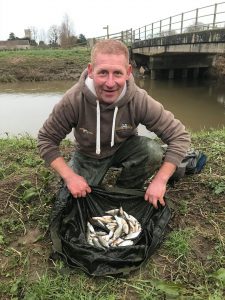 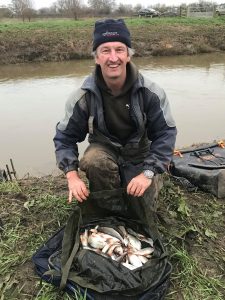 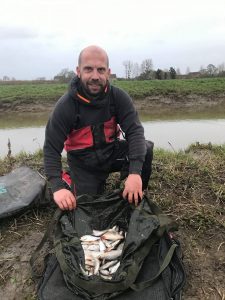 Dan had lots of small fish for 5lb and second place

I was top weight on the day and picked up £70 (plus nuggets from Andy and Steve) and finished up second in the league which was worth another £60 so a very profitable day. 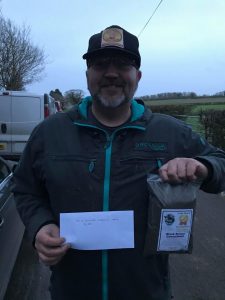 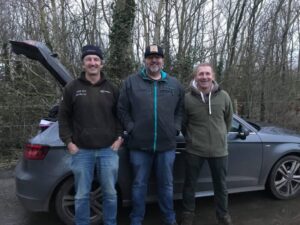 The top three in the league (from left to right, me, Andy and Paul)

After seven matches and dropping the worst result, the final Warehouse League looks like this,

I would like to say on behalf of all the anglers a massive thanks to Max at Ilminster Warehouse for the very generous sponsorship and Ilminster Bowling Club for looking after us in the mornings. On a personal level, I want to thank all the anglers who fished for helping to make it a great little league.

Before I go here are a few facts and figures from what has been a really enjoyable little league, we tried some different stretches and a private pond and have had some great days fishing along with a few where it has been hard for some but I’ve loved it and it’s made a change from fishing the same places every week. We’ve had 21 different anglers fish one or more of the matches and the highest attendance was 12 which was up on last year so the league was growing in popularity. I can’t do it next year which is a shame as there were several stretches we never got round to trying, Hatch House I really wanted to fish and I think more swims need exploring at Redbridge. I’ve also loved fishing at Midelney and Muchelney and hope we can get back on there a few times next year.

Next up – Ilminster Open