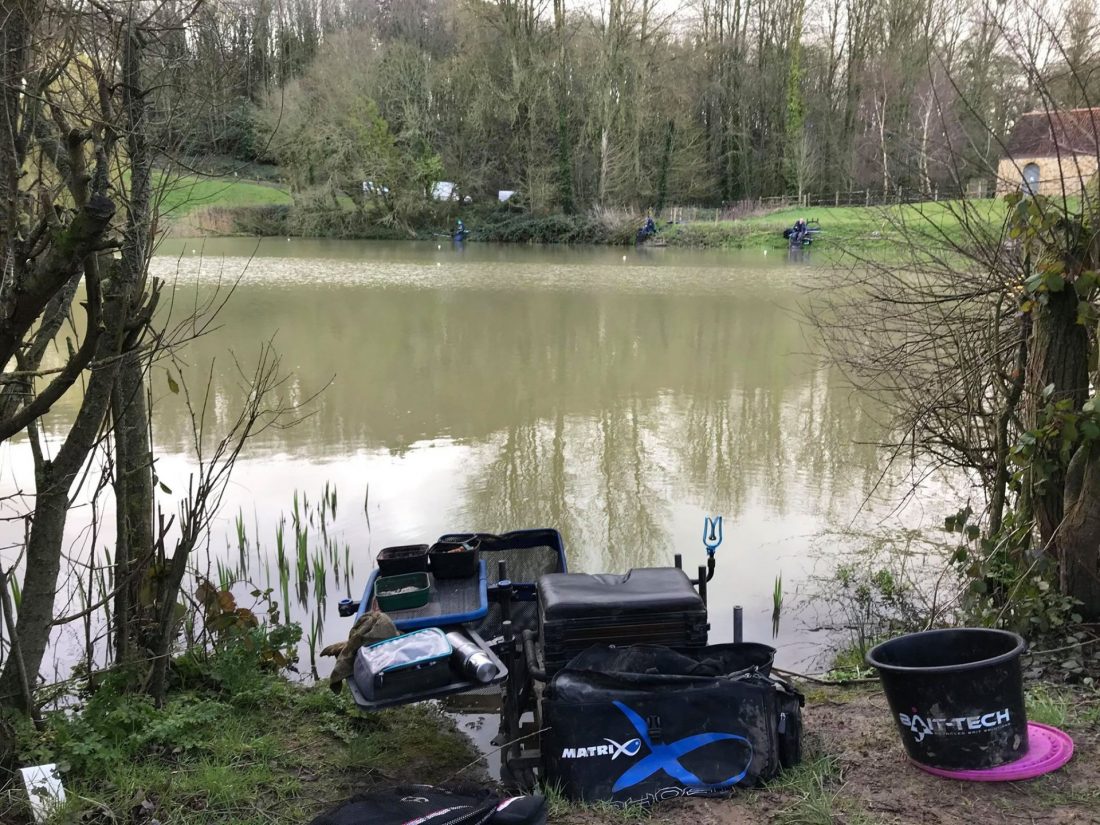 I had hoped we might get on the river for the last Sunday of the season but more rain scuppered any chance of that so we would head out the pond which has been hard but fair in recent matches. We met at the bowling club for breakfast and decided to use the Aplin bank plus pegs 2 and 4 and to be honest I didn’t really mind where I drew. After most people had delved into the bucket, I asked Dave to pull one out for me and I was well happy when he handed me peg 2. On arriving, the pond was quite coloured and there were odd fish topping so hopefully we’d get a few bites. 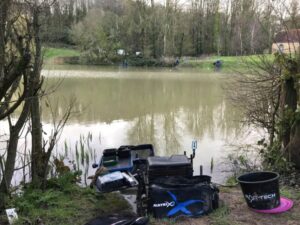 The pond was quite coloured

I set up a 0.5 gram Drennan Roach to fish top two plus three and a 1 gram bodied float to fish 11.5 metres, on the side tray I had a pint and a half of casters, half a pint of red maggots, hemp plus some Bait-Tech Pro Natural Dark and Bream I mixed up 50:50. I got us underway and cupped in a single ball of groundbait on my shorter line and two on the longer one before starting with single red maggot, the rig settled and went straight under, I struck and swung in a small roach. The same thing happened next put in and it was a bite a chuck, I could see Baz Morgan catching well on the whip over on peg 21 and Terry on 20, Cannonball Dave on 19 and Steve P on 18 were all swinging in small fish regularly as well.

I got to nine or ten fish but was also losing quite a few as I shipped back due to the barbless hook while Baz was already starting to pull away on numbers of fish as the whip is obviously faster and the more direct nature means less fish coming off. In a bid to improve the stamp of the roach I switched to caster and it was still a bite every put in although the majority were no bigger with most less than an ounce. Terry ‘The Toast’ was now on the feeder so it would be interesting to see if any skimmers showed.

After an hour I had 26 fish (all roach) but I just couldn’t seem to catch any quality, I cupped in another ball of groundbait on the longer line but would leave it alone while I was still getting plenty of bites short. Baz was still getting a fish a bung and I couldn’t see anyone catching him today unless some bonus fish showed up. The weather was all over the place, windy one minute, then raining and even the sun showed itself a couple of times. I added another 24 roach in hour two and as far as I could tell I was doing okay, I’d only seen Terry catch a few small fish on the feeder although I didn’t know how Ian Burton was doing on peg 4 to my left.

The roach kept coming, mostly small fish with the odd 2-3oz fish and I even netted a couple of slightly better ones but I still didn’t think they would average an ounce apiece. I was feeding hemp and caster short and kept topping up the longer line with a ball of groundbait every hour or so. Hurf came for a walk round and said Ian was catching lots of small fish but not as quickly as Baz who was looking favourite to win. I was getting occasional little quiet spells which made me wonder if some bigger fish had moved in but then it was back to getting a roach a chuck and I couldn’t believe I hadn’t had any perch, rudd or even a Dillington barbel.

With an hour to go, I saw Terry strike into a better fish on the whip and he landed a nice skimmer which could be a handy bonus today so I couldn’t resist it any longer and had my first look on my long line where hopefully the skimmers would be queued up! First put in with the hook buried in a caster, the float sailed away but another small roach wasn’t the result I was hoping for, I shipped out again but this time with double caster, a really positive bite saw a firm strike but instead of solid resistance an even smaller roach flew out of the water! I gave it fifteen minutes but in the back of my mind I felt I was wasting my time so spent the remainder of the match on the shorter line and when I shouted the all out my clicker was reading 161 fish.

At an ounce apiece I’d have 10lb but I knew they wouldn’t average that and probably had nearer 6-7lb. I packed up and took my kit back to the car before collecting the scales and starting the weigh in with Steve, he had 90 fish and weighed 4lb 15oz although he had lost one better fish, Dave had 3lb 10oz and then ‘The Toast’ had 4lb 2oz before we got to Baz, he pulled his net out and had loads of fish (286 to be precise), which went 12lb 14oz, a brilliant weight on the day. Then we walked round to weigh Ian and he had 6lb 2oz and I thought I might have a little more but actually weighed 9lb 6oz which was enough for second on the day. 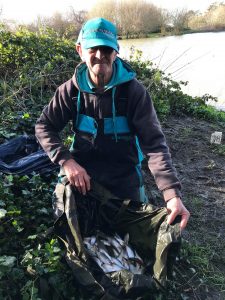 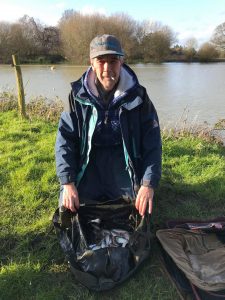 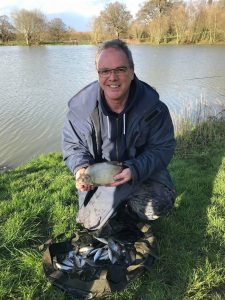 Terry had 4lb 2oz which included a nice skimmer 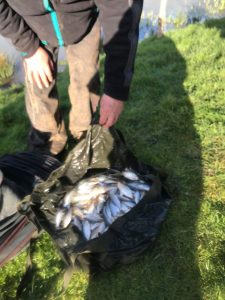 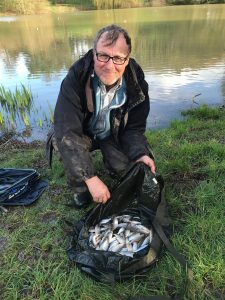 Ian had loads of fish for 6lb 2oz from peg 4 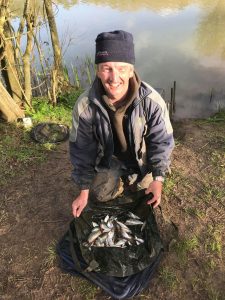 The pond never ceases to amaze me, after the last three matches which were won with 4lb 10oz, 3lb 1oz and 3lb 2oz, I thought 4-5lb would be a good weight today. If I’m honest I wasn’t sure there were that many small fish left in there, so to see so many roach being caught is hopefully a great sign for the future. Anybody who knows me or regularly reads the blog will know catching small fish isn’t really my cup of tea but I’ve had a bite every put in for five and a half hours today and you can’t complain at that!

So with just the final round to go in two weeks time, I’ve edged ahead in the league but it’s still very tight between the top three and anything can happen.

After six matches and dropping the worst result, the V.E.S. Precision League looks like this,

Next up – Perry St League