Barney’s Pairs is always one of my favourite matches although I can never seem to keep hold of a partner and I’m getting concerned I may need to change my deodorant! This trend continued with Andy Saunders my latest partner for this match, we’ve also used several venues in various combinations over the years. Ideally we’d have fished the Isle (Barney’s favourite venue) but with rain forecast and the fact I couldn’t pop down and check the state of the river or the swims as I was fishing yesterday, the safest option was to use the ponds. I was going to use the canal but after last weeks disaster, Dillington and Harry’s was hopefully the better bet!

Nine pairs booked in which is a decent number and I was up early so I could get to the bowling club and have breakfast before everybody started arriving. Along with the regulars it was great to see Dan, Ian, Kev and Monkey from Taunton fishing today. With everybody fed and pools paid it was time for the draw and I asked one person from each pair to do the draw, starting with Dillington, most people seemed to want pegs on the nearside (The Aplin bank). Ian Burton’s legendary drawing arm didn’t let him down as he pulled out peg 19 and then Stuart Aplin drew peg 20 (was it ever in doubt!). Elsewhere Harry was on 2 with Andy W on 6 and Kev Williams on peg 8 with Andy S next door on 9. Dave P and Baz were on 13 and 14 and Leighton drew 18 where he won the lake from last year.

Then it was time to draw for Hebditch’s and of course everybody was hoping to draw the reed bed flier which was H4. If Andy couldn’t draw that one for me, I’d settle for any of the pegs on the near bank (H1 to H3) or H5. He went into the bucket quite late and handed me H9 (not even close!). Rob was the lucky angler to draw H4 and I was sure everybody else was fishing for second place. We got out the pond and when I saw my peg was the one that finished second in the Xmas match I was a bit happier, admittedly it was only with one carp and a few roach for 4lb odd but he also lost two carp that day so hopefully I’d get a few bites.

On the downside me and Karl on peg 8 were getting the very keen wind straight in the chops! I set up three rigs, a 0.4 gram Guru Diamond to fish corn over Bait-Tech Sticky Micros 10 metres straight out, a 0.4 gram Drennan Carp to fish maggots over Special G Dark at the same distance angled to the right and finally a Guru 0.6 gram Wire Pinger to fish maggots at top two plus three just off a bush in the water to my left. 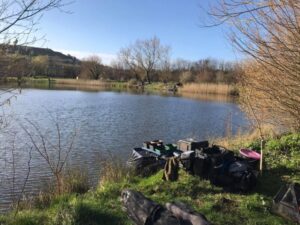 You can just make out the peg I wanted in the distance on the opposite side of the lake!

I got us underway and fed all three lines before starting with corn on the hook and toss potting in a few micros at 10 metres. You can always tell how it’s going to fish after the first ten minutes, an early bite and you’ll be in for a good day, no indications and it’s going to be rock hard! Thirty minutes in and the float hadn’t even trembled (unlike me as the wind was bloody cold!), Monkey on peg H1 had caught a couple of roach so to try and get something in the net, I picked up the maggot rig for the other long line and toss potted in a few maggots, the float went straight under, only for me to bump it!

I scaled down to a size 18 Guru F1 Pellet to 0.11mm N-Gauge and next put in had a chunky little roach, a couple more followed along with some tiny rudd and at least I was putting a few fish in the net. I could see Monkey catching roach as was Paul A on H2 and Dan on H3, but with an hour gone, as far as I could tell, nobody had caught a carp.

Karl came for a walk and said he hadn’t had a bite yet. I had another go with corn and also tried by the bush with maggot but no indications at all. As we approached the half way point, I couldn’t believe nobody had caught a carp yet, I’d seen several roll out in the middle so they were moving about but why weren’t they feeding? Hurf on peg H6 and Baz’s adopted son, Terry ‘The Toast’ on H7 had both swung in small fish so most people had caught something but one carp could make all the difference today. Then the shout went out that Rob had caught a carp and I was sure he’d go on to win the lake comfortably. Karl went for another wander and said he still hadn’t had a bite.

With around two hours to go, I tried the light rig over the micros line and after about ten minutes the float shot under and the strike was met with solid resistance, this was no roach! I played it very carefully, wary of the relatively light hooklength and the fact a bonus carp could put me second on the lake. I couldn’t get it’s head up and I was getting lots of encouraging(!) comments from around the pond, I was convinced I was going to lose it but safely netted a pretty mirror of 3lb or so. Rob had landed a second carp but I really thought I might get a couple more but only had another roach before the end. I still thought I’d be second on the lake so it was job done and two points.

After packing up I took my kit back to the car to get the scales and when Karl arrived back I asked how he’d got on, expecting him to say he’d blanked and was a little taken aback when he replied that he’d caught four carp in the last half an hour! I paid him the pound side bet although I still thought there was a chance he was winding me up.

Monkey was first to weigh and had 1lb 12oz of roach and rudd, Paul Adams had 10oz and then Dan Baldwin had put together a nice net of fish including a small carp, a skimmer plus roach and rudd for 3lb 13oz. Rob had actually caught three carp and a nice chub for 10lb 9oz, Nic hadn’t caught on H5 and then Hurf had a skimmer and some roach for a pound, Terry ‘The Toast’ had 7oz and then Karl’s four carp went 12lb 4oz, I was last to weigh and my carp plus a few roach and rudd went 3lb 13oz for joint third on the lake. Thanks to Dan Baldwin for the photo.* 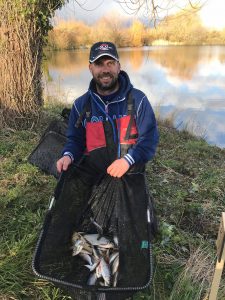 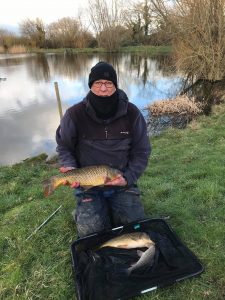 Rob had three carp and a nice chub for 10lb 9oz 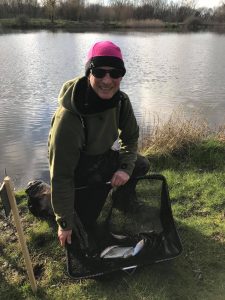 Hurf had a nice skimmer and some roach for 1lb 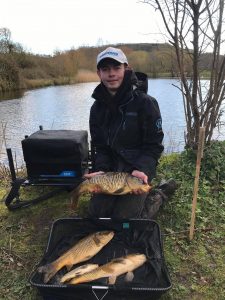 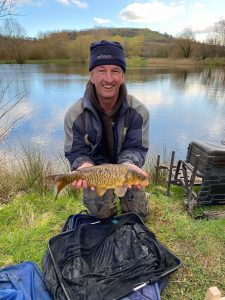 Back at the results and Stuart had won the section at Dillington with 4lb 10oz of roach and perch on the whip so him and Karl had a perfect two point score, Baz was second with 4lb 9oz and Harry had 3lb 11oz for third, Ian Burton had 3lb 7oz, Andy Welch had 2lb 14oz, Andy Saunders had 1lb 9oz, Leighton had 14oz with Kev Williams just an ounce behind and Dave Phillips had 10oz.

After totting up the points, Karl and Stuart were clear winners with Dan and Ian second on seven points and then there was a three way tie with Hurf and Harry, me and Andy and Rob and Leighton all on nine points with the latter pairing taking the verdict on weight. I won the £20 section money by triple default (I’m not proud!) so we had a tenner each and Baz had the section money for Dillington. As always we donated the peg fees to a charity of Harry’s choosing and the Aplin’s donated £20 of their winnings which was a fantastic gesture so along with the peg fees from the Xmas match, almost £100 was raised and when Harry decides on charity I’ll put something on the blog.

The club would like to say a massive thanks to the Hebditch family for allowing us to use the pond, Ilminster Bowling Club for looking after us so well in the mornings and of course the anglers who all made it an enjoyable day even if the fishing was a little tough for most!