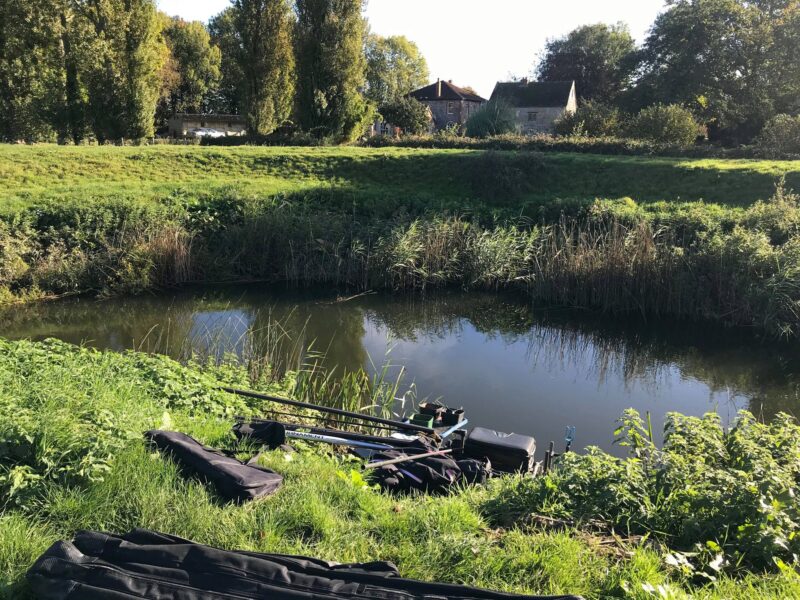 I always look forward to this league and getting back on the Isle, it’s seven matches with your best six results counting so it’s nice if you can get off to a decent start. I managed to win the league last season for only the second time and would be trying my hardest to retain the title. Rob and Leighton had been down the river and done a brilliant job of making sure all the swims were cut out and fishable. As per usual we met at the bowling club and I have to say they do a cracking breakfast and for a fiver you’d be hard pressed to find better value.

Steve ‘The Pole’ was first on the list and Rob pulled out 126 (Barney’s Bend) for him and I offered to let him have my pound straight away! The usual ooh’s and aah’s followed as peoples fate for the day was decided, when it was my turn, there were some good ones left and a couple that are the stuff of nightmares, Rob grabbed a ball and revealed the number 124 and my head dropped! It used to be a great peg, a matchwinner that you would run to but not so good in recent years and I felt decent league points was the best I could hope for. Ian Burton ended up on 128 and Rob had 125, what would I give to be able to draw pegs like that!

After parking up, I took my kit to the peg and it looked nice with the odd fish topping, John D was below me on 124a and Digger was on 123. I set up a 0.75 gram bodied float to fish across in the flow by the reeds and a 0.6 gram DH16 for fishing towards the bottom of the swim where is was a bit shallower. Both rigs had spread bulks and Guru Match Special size 20 hooks to 0.12mm (as the swim does hold chub). On the side tray I had maggots, casters and Bait-Tech Super Seed hemp. 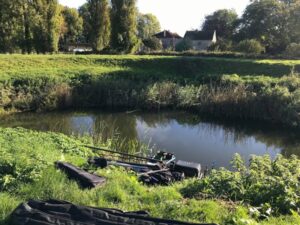 On the whistle I started with the heavier rig and single red maggot to just try and get a bite to avoid the dreaded DNW, I was feeding hemp and caster at the top of the peg and also towards the corner on my left. Inching the float through, I had a bite quite quickly and was expecting a minnow but was pleased to swing in a small roach. A couple more followed so I switched to caster and it was still a bite a chuck from small roach, chublets and gudgeon along with the odd better roach.

After an hour I had 26 fish for around 3lb and it felt like there were a lot of fish present, going into the second hour, it slowed up a bit, I wasn’t getting as many fish but I did start getting some nice roach that required netting. I added another 15 fish for probably 1.5lb and was really enjoying myself. The next couple of hours were virtually identical and added another 30 fish, I bumped and missed a few and also hooked what felt like a better fish but as I shipped back, everything went slack and the hooklength had snapped so maybe a pike strike! 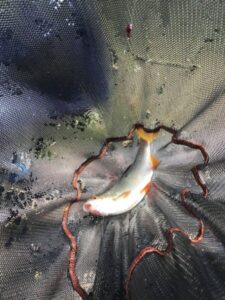 I was having to go further down the swim to get bites (but not in the tail yet) and hooked a nice roach but as I fed the pole behind me, it went solid as a toothy critter grabbed an easy meal. I had it on for ages and never saw it, eventually it’s gone in the reeds on the inside and snapped me. With two hours to go I was up to 71 fish and decided to have my first look down the bottom of the peg so I picked up the lighter rig and added a section to the pole.

First put in, the float buried and a fair bit of elastic came out on the strike, I could see it was a nice roach in the clear water and I carefully shipped back but then there was a massive swirl as a pike took it, I had it on for a while but luckily for me (and the roach) it spat it out! Next chuck I had another decent roach and really thought it would be like shelling peas for the rest of the match but next run through I snagged up and there was obviously some weed about as well.

I carried on catching odd decent roach right in the tail of the swim but instead of the swim getting stronger towards the end of the match as I expected, bites were becoming less frequent. Trying the shallower rig at the top of the swim I had a nice roach straight away but it was a one off, the deeper rig resulted in a small roach so I spent the remaining period fishing the bottom of the peg.

On the whistle I’d ended up with 98 roach, chublets and gudgeon plus a few minnows and didn’t have a clue what weight I had, at an ounce apiece it would be 6lb but I’d had a fair few net roach so I thought probably somewhere between 9-12lb, hopefully a bit more. I packed up and as I had the scales went up to weigh Leighton in on peg 122, he’d had lots of small fish for 3lb which seems to be standard for that peg, Digger weighed 4lb 2oz and then my fish went 9lb 15oz which I was a little disappointed with. 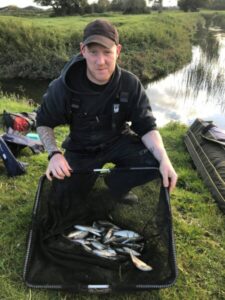 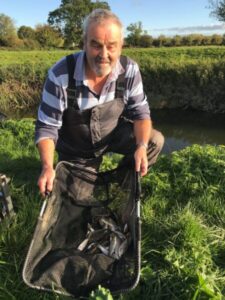 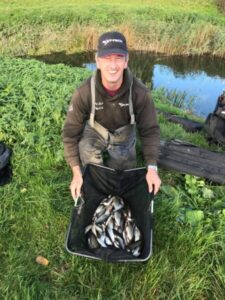 I’ve had a lovely days fishing to weigh 9lb 15oz

John had 3lb 14oz and then Rob had struggled on 125 for 3lb so I’d won my section and thought there was a chance I might sneak into the frame. As we got back to the cars, that went out the window as the other section had fished it’s head off! Ian ‘Bagger’ Burton had the top weight with 16lb on 128 with Steve ‘The Pole’ close behind with 15lb 8oz and Terry ‘The Toast’ was third with 10lb 6oz from 129a. Dave P had also done really well to weigh 9lb 15oz from 126a and Neil P had 9lb from 129, Fieldy had struggled for 4lb 2oz on 127 and it’s another peg that only ever seems to do 3-4lb and I really wouldn’t want it. Thanks to Neil Purchase for the photos* 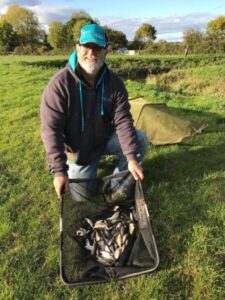 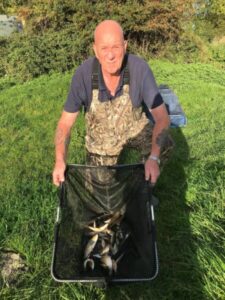 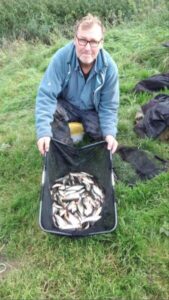 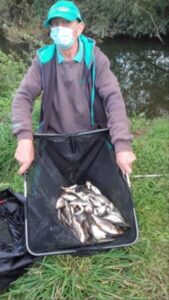 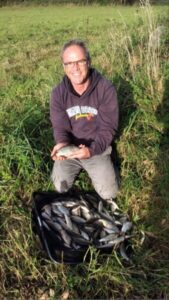 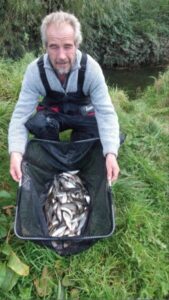 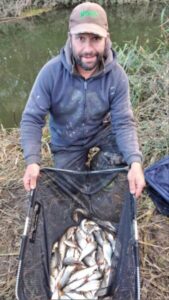 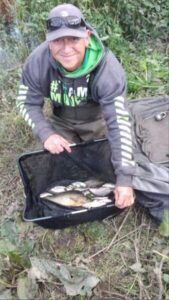 Fieldy had 4lb 2oz which included a nice perch from 127*

So I picked up £20 for the section win although I did lose pounds to The Toast and The Pole but crucially I got the all important one-pointer for the league, just need another five good results now! I had a lovely days fishing and it’s fantastic to see so many small fish showing in a lot of the pegs although they do tend to do a disappearing act as it gets colder.