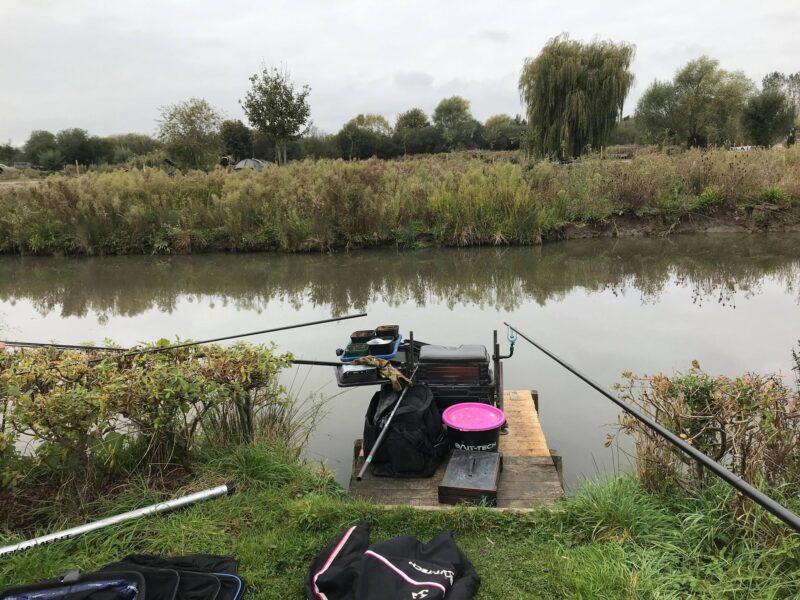 Two matches this weekend that I was really looking forward to, Charlie’s Memorial at Summerhayes on Saturday and then Ilminster v Stoke on the Isle the following day. Charlie’s match is silvers only and one I would love to do well in, although I’ve really struggled to avoid the carp this year which I’m sure Charlie would find very amusing!

Up early, I met Jeff and Roy for breakfast at ‘A Slice of Happiness’ in North Petherton, I went for the Full English and it was lovely but I struggled to finish it all, check out the menu on their Facebook page.

Fully fuelled up, we headed to the venue and there was a good turnout of 17 (it was 20 but a few dropped out which is always a bit disappointing). After coffee (thanks Pete), Jeff said a few words about Charlie before the draw got underway in the order we were down on the list. I was fairly near the top and quite fancied pegs 15, 17 and 19 and I got my wish when Roy (Jeff’s glamorous assistant) pulled out peg 19 for me. Roy was on 17 with Dave Bull on 15 and Ray Wickham was on 21.

It had been chilly overnight and with a lot of anglers around the lake and all fishing for silvers, the general consensus was that it would probably be hard with 10lb being a good weight. 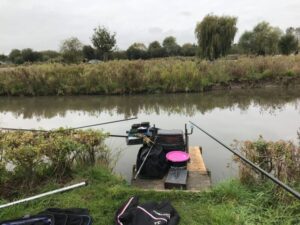 I set up a 0.3 gram NG Mini Gimp to fish the top two straight out and then a 10 x 11 MW F1 Slim for top two left and right, top two plus one and two lines at 8.5 metres down the track. On the side tray I had Bait-Tech 4mm Xpands and dead reds for the hook, micros plus Special G Dark and The Juice groundbait I’d mixed the night before.

On the whistle I cupped in small balls of groundbait on all but one of the lines with the longer line angled at one ‘o’ clock receiving just a few micros. I started on the top two lines with a 4mm expander on the hook but after 20 minutes, I hadn’t had a bite and not a lot had happened around me, I think Ray may have had a small roach.

Roy on 17 then hooked what looked like a nice skimmer only for it to come off as he shipped back, so I’ve gone out on the left hand 8.5 metre line with two dead reds on the hook to see if I could muster a bite. On the half hour mark, I’ve had a lovely positive bite and on the strike a pleasing amount of elastic came out, it was one of those where it wasn’t fighting very much and I was hoping it would be a decent skimmer but you just knew it wasn’t! Sure enough a 2lb carp popped up and my silvers net was still empty!

I had another bite quite quickly, it was only a small blade but as I unshipped at the top kit, it fell off! Roy landed a good sized skimmer and then Dave had one as well, my next indication resulted in a decent skimbob and at that stage I thought we might get a few bites but that was it for me in the first hour. I was swapping between the two longer lines and also dripping in a few micros on the top two plus one line but would leave it until the last couple of hours before trying it.

Another skimmer from the left hand line and although I certainly wasn’t bagging I was fairly happy putting odd fish in the net. Roy was now fishing the waggler across and he struck into a good skimmer before adding another next chuck to put him firmly ahead of the anglers around us. I managed another 6oz skimmer and a couple of small fish but bites were very few and far between, I wasn’t even hooking any carp!

Tom Thick who was on peg 1 came for a walk and asked what I had to which I replied about a pound and he said he had around the same so it was hard going over on cyanide straight too. Roy chucked a little bomb over his waggler line and hooked what looked like a decent fish, it was fighting too hard to be a skimmer but he was also playing it very carefully and when a big perch popped up, I could see why! He then added another decent skimmer and was on his way to a decent weight.

I added another section and started a new line at 10 metres up the shelf but never had a bite there. Dave then supplied the afternoons entertainment when he hooked a big eel that he just couldn’t get in the landing net and it bit him off! With two hours to go I tried the top two plus one line but to be honest I wasn’t confident and never had a bite. I did foul hook a skimmer on the right hand 8.5 metre line and had a couple of small fish.

Ray chucked back and went on with an hour to go, then after not hooking a carp for nearly five hours, I hooked three in quick succession to finish off my day nicely. Roy on the other hand finished with a flourish landing a decent skimmer on the pole and had fished a brilliant match.

After packing up I went to watch the weigh in which started with Nigel Coram on peg 37, he had some nice skimmers for 5lb 8oz, Tom didn’t weigh on peg 1, Mark Wenn on peg 3 had 5lb 13oz, Rob Birch weighed 4lb 15oz on peg 5 and Adie had chucked back on 7. Glynn Wickham weighed 5lb 6oz from peg 9 so I handed over a nugget and then Mark Leahy had done well on peg 11 to weigh 7lb 9oz and had lost a couple of decent fish which could prove costly. 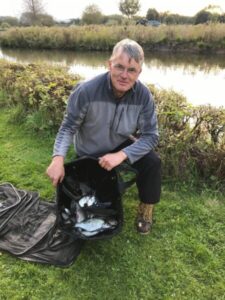 Roy was second with 9lb 2oz 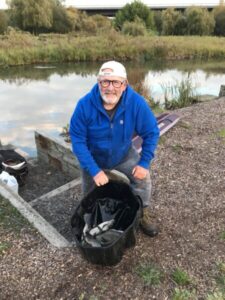 So a tough day for most but it was great to see a good turnout for Charlie and I’m sure he’d have loved the challenge of trying to winkle out a few silvers out on a tough day.