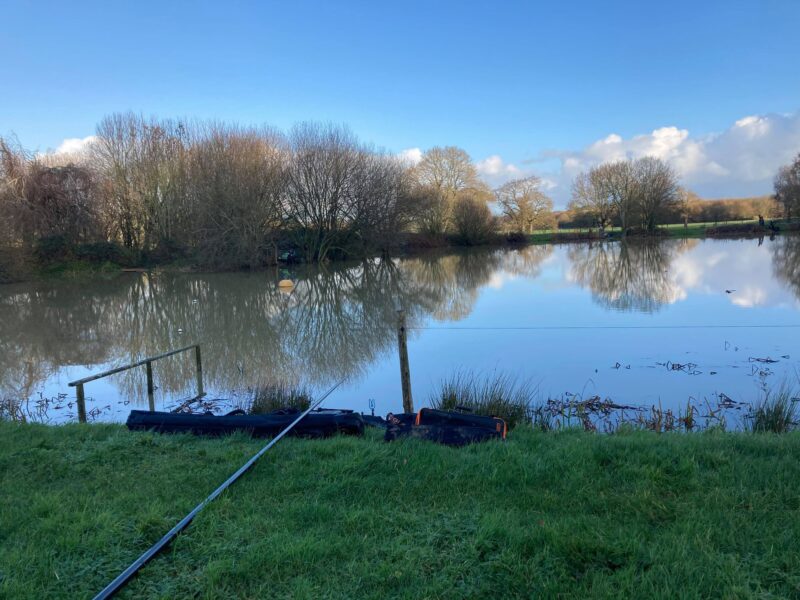 The river was nigh on perfect Saturday morning but once again Mother Nature thwarted us as heavy rain pushed the Isle into the fields again. Initially there were a similar number booked in to last week but a few dropped out when it was moved to the pond so more of a knock up than a match. The weather was truly awful overnight, heavy rain and strong winds that woke me up in the early hours, thankfully the forecast was much better for Sunday.

A quick pitstop at Greggs for a bacon and sausage bap and a coffee (£2.85 – great value) but I had to have a triple choc donut as well! Then to the pond where Rob did the draw and with only two balls left in the bucket, peg 2 was still there, would I end up on it again? No was the answer but I was happy enough with 21. The pond was very coloured again, particularly by the stream coming in where it was like cocoa and probably wouldn’t do John D on 18 and Steve P on 17 any favours.

Ian ‘Bagger’ Burton was the lucky angler to be allocated peg 2 and even when he’s not pulling out his own pegs, he’s still got a golden arm! Rob was on 4 with Baz on 6 and Digger on 8. The level was right up again but there were lots of small fish topping and I thought it would be similar to last Sunday with probably 8-10lb required to win. 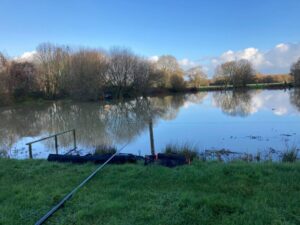 It was a nice day although a tad chilly!

I set up a 4 x 16 Preston Chianti for 10 metres angled slightly to my left and a 0.6 gram Drennan AS5 Pencil float for 11.5 metres straight out. On the side tray I had maggots, casters, some dead disco pinkies, hemp and groundbait was Bait-Tech Pro Natural Fine Lake Dark and Extra. Rob gave a toot on his whistle and we were off, I cupped in a single ball of groundbait containing just a few freebies on both lines before starting at 11.5 metres with single red maggot on the hook.

I thought it might take a while to get a bite (it took 25 minutes last week) but after only 10 minutes, the float sunk from view and I missed it!, I had a small roach but then bumped a couple. Ian was catching small fish regularly so I tried my shorter line and started catching quite well although mainly tiny roach and waspy perch. I put on two red maggots but that didn’t improve the size and caster resulted in no bites at all.

It looked like they were struggling on the opposite bank although I did hear Digger ask if carp counted as he’d caught one of the small rogue carp that had mysteriously appeared earlier in the year! After an hour I had 12 small fish but couldn’t really gauge how I was doing as I couldn’t see Rob, John or Steve. Nick P turned up to see how we were doing and it was great to see him out and about after his recent stay in hospital. He went to see how the others were doing and then another van pulled up and I could see the unmistakeable shape of a Torquay Tart headed my way!

He stayed for a bit, offering lots of helpful advice!, while he was with me, I was still catching tiny fish but did add a couple of slightly better 2-3oz perch which I netted to be sure. Nick came back and said Baz and Digger weren’t doing much but Ian was catching well. I did hook a fish that pulled a fair bit of yellow hydro out and swung in a monster gudgeon (Dillington barbel). The Tart left me to it and with around an hour and a half left, Big Frank was the next visitor. He had a quick chat before walking round the pond, on his return he said Digger had caught a decent skimmer and Rob had landed two so it was all getting rather tight.

I had another go on the longer line but only had one more roach there, so concentrated on the 10 metre line. With 45 minutes to go, the float went and this time a substantial amount of elastic came out, I shipped back carefully and it was a lovely 12oz roach! I’ve caught quite well in the last period with some slightly better (1-2oz) roach and finished with 79 fish. Normally that would give you 5lb (at an ounce a piece) but the average stamp had been tiny today.

I packed up and went round to get some photos, Digger was first to weigh and his decent skimmer, little carp and a few smaller fish went 4lb 4oz, Baz had a pound of roach and then Rob had ended up with three skimmers for 4lb. ‘Bagger’ Burton had loads of small fish for 5lb 2oz to go into the lead and then I fell just short with 4lb 12oz. John D didn’t weigh and Steve ‘The Pole’ had 3lb 4oz of roach but had lost a bigger fish which has cost him. 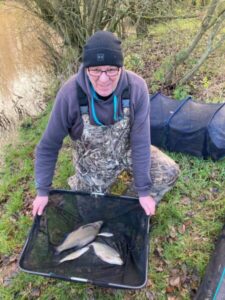 Rob had three skimmers for 4lb 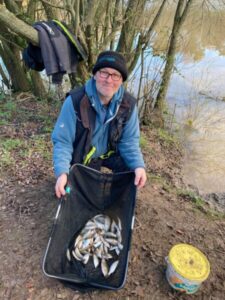 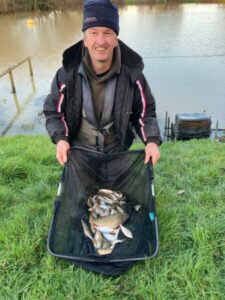 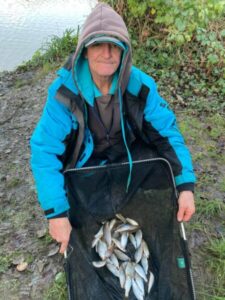 So it’s fished quite hard but still a close match, I’ve ended up second and picked up £40 plus a nugget off Steve. I’ve had lots of bites although catching tiny fish isn’t my favourite type of fishing as I’d much rather catch quality but then again, I’d still rather do that than be stuck indoors!