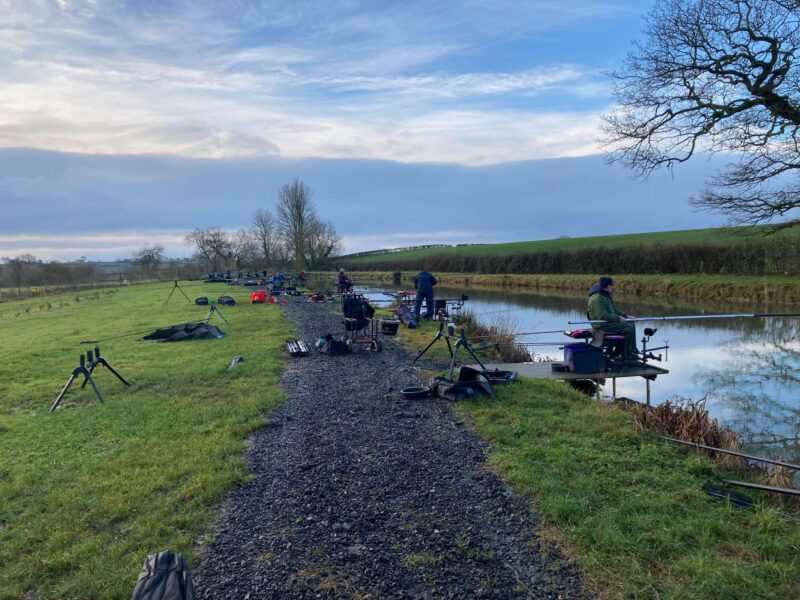 I always try and fit a few matches in over the festive period so when Chanter contacted me and said he was running another open at Covey, I jumped at the chance. With a fairly early draw, Greggs wasn’t open so I went to Costa and had a less than inspiring bacon roll which wasn’t cheap either! Then it was off to the fishery to be met by Chanter and his lovely wife who was in charge of the bag of destiny, favoured peg 1 had already gone but I was hoping for a change of scenery as in four visits, I’d been on 16 and 14 twice and not done any good (admittedly I was lucky enough to draw peg 1 the other time!). Teresa delved in and pulled out peg 14 for me again!

The lower numbers and the pegs opposite the tree always seem to do well and also with Toby Burrell and Trig either side of empty peg 9, I was sure they’d be there or thereabouts today. The last time I was on 14 in a silvers match I’d really struggled for 2lb odd but had chucked back probably 30lb of carp and F1’s fishing maggot which I thought would be a good weight today and hopefully I’d get some silvers too.

Allan Oram was on 13 and my neighbour on the other side was Phil Wilkins with Chanter next to him and Lee J on end peg 17. Steve ‘The Pole’ was on 6 (and we’d have the nugget on silvers), The Toast was on 5 with Mark Leahy on 4, Dan Squires had the last peg in the bag which was 3, Chris ‘The Grand Wizard’ was on 2 and Nic Baggott was the lucky angler on peg 1. 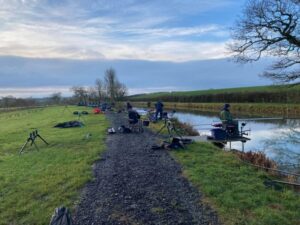 Looking down the lake from peg 14 (again!), on the other side of Allan you can see Kev Newman on 12

I set up a Drennan 0.4 gram Carp 1 for the top two plus three and 11.5 metre lines and a Guru 0.45g F1 Carbon Slim with strung Stotz to fish through the water if lots of roach showed. On the side tray I had a pint of reds plus some dead maggots and groundbait was Bait-Tech Pro Nat Fine Lake Dark.

On the whistle I cupped in a single ball of groundbait containing just a few dead reds on both lines before starting at 11.5 metres with double maggot on the hook. Chanter hooked a fish first chuck but it came off as he shipped back, then a tentative bite saw me get off the mark with a small F1. Allan was catching quite well fishing right across and down past him I could see plenty of elastic and landing nets going out so it looked like it was fishing well.

I was toss potting in a few maggots every put in and although not bagging I was getting regular indications and with an hour gone, I had six F1’s although I pulled out of one and it went a bit quiet. Allan was doing well and I was regretting not setting up a rig for across although to my right, they were fishing over and struggling, Phil hadn’t caught yet, Chanter only had a couple and Lee was on one or two fish.

The second hour was similar with another four F1’s plus a small carp and my catch rate was ticking along nicely although Allan was still several fish ahead. Then as we approached the half way point, the bites just stopped, Phil had a carp from his shorter line so I fed another ball at 11.5 metres and came in on the top two plus three line but after twenty minutes I hadn’t had an indication. Mr Oram rested his longer line and when he went back across, a couple of fish quite quickly pulled him further ahead.

Back on my longer line, it was still dead as a dodo, so I got off my box and set up a little rig to fish across at 14.5 metres in about 3 ft of water. I toss potted in a few maggots and after five minutes, missed a bite before catching a small F1, I did miss another indication but it wasn’t really happening and it was hard work fishing 14.5 metres for little return. Also it went from being a lovely day with blue skies and winter sunshine to some very ominous looking black clouds before it started raining and it was freezing cold.

I kept trying the shorter line but never had a bite there so spent the rest of the match at 11.5 metres, I did add another F1 but was going through the motions somewhat. Steve P came up and said he was really struggling and hadn’t had any silvers so I stuck at it as we still had our pound to fish for. The weather was now really unpleasant and the three anglers on my right started packing up.

With around half an hour to go, the float slid under and I struck into another F1 but then had a nice surprise when a lovely barbel popped up! That was the last of the action and I wasn’t too upset to hear the all out. With Chanter already packed up, the scales were soon with me, Lee had chucked back on 17, Chanter had 6lb 13oz of carp and a 4oz crucian, Phil also recorded a DNW and then my carp went 15lb 3oz and my barbel weighed 1lb. Allan had 31lb 10oz of carp and a 2oz skimmer and although there was no following the scales I heard Kev Newman had 21lb 8oz of carp and no silvers.

Nick Veale on peg 11 had 16lb 4oz which included 6oz of silvers and then Trig had 52lb 3oz of which 3oz was silvers so with half the anglers weighed in, I was still leading the silvers and started to think I might sneak in the silvers frame as they were paying two. I took my kit back to the car and when Chanter had finished the weigh in, the bottom half had fished better with Dan Squires winning with 56lb from peg 3, Toby Burrell was second with 53lb 6oz from peg 8 which also included the best silvers weight of 1lb 10oz (they pay double bubble) and Trig was third.

Nic Baggott won the bottom section with 36lb 12oz (including second placed silvers of 1lb 8oz) and Allan won our section. Steve P weighed 6oz of silvers so I claimed a nugget, Terry ‘The Toast’ had 1lb 2oz of silvers and Chris W had 1lb 4oz. There were a couple of other DNW’s, Mark Leahy on 4 and Terry D on 7 but overall the bottom section had fished better than the top end. Thanks to Steve Chant for the photos* 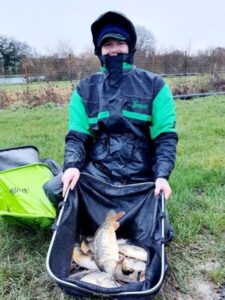 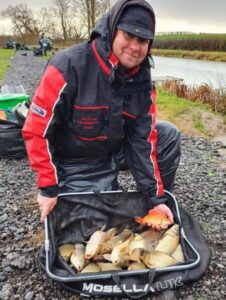 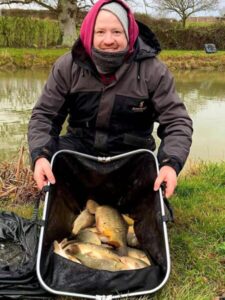 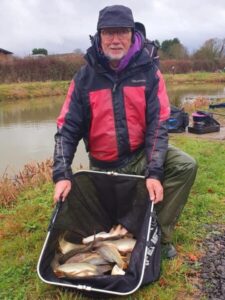 So another close match albeit a disappointing one for me, it’s a cracking little venue which I do enjoy fishing, it would just be nice if I could get further down the pond than peg 14!

I have got one last match to report on but I’m not sure it’ll be finished by tomorrow so I’d like to take this opportunity to wish everyone who reads the blog A Happy New Year, lets hope 2021 is a better one because this year has been awful for everyone, on a personal level it’s probably been the worst year of my life and I’ll be glad to see the back of it!

Next up – Brendon’s Bonus Bash