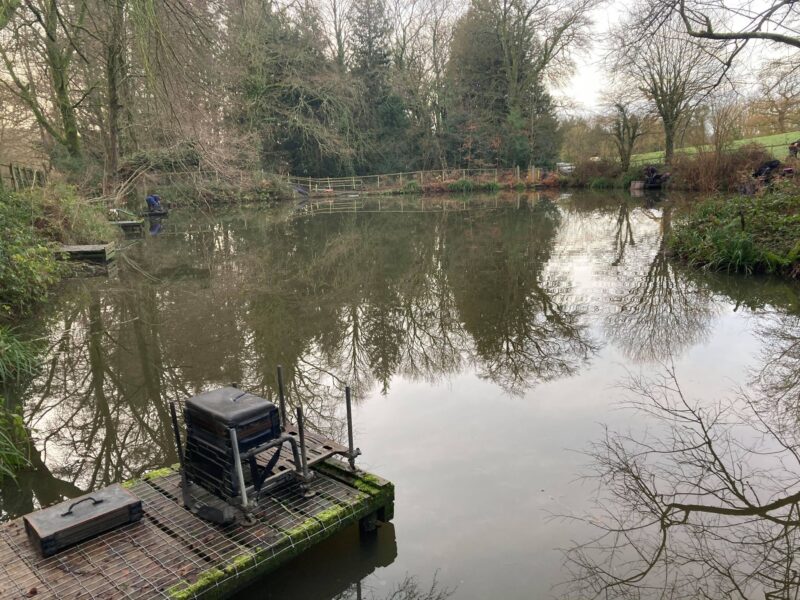 Now in it’s third year, Brendon’s Bonus Bash has become a yearly tradition, it’s not really a match, just a knock up between mates and we normally have a right laugh with lots of talk about Oak trees, ghost carp and otter dogs among many other diverse subjects, some of which are far from suitable for publication here! I popped over to Greggs for breakfast and made a bit of a pig of myself with two bacon and sausage rolls, a caramel custard donut and a big jammie dodger biscuit!

Then it was off to the pond and there were four of us fishing today, me, Hoffy, The Tart and Smithy, the pegs were 1, 2, 5 and 8, all great pegs and I ended up on 5 behind the island although I would have preferred an open water swim. I set up a Drennan 0.4 gram Carp 1 for top two plus two in front and to my left and a 0.3 gram Drennan Margin Crystal for dobbing. On the side tray I had a pint of reds, bread, corn and Bait-Tech 2mm Carp & Coarse pellets. Peg 5 was my home for the day

When I got to my peg it looked nice apart from the dead duck floating in the margins, I did try removing it but only succeeded in launching it out into the lake where it proceeded to go round in circles due to the flow from the inlet! On the whistle I fed maggots on the short line in front, micros and corn on the left hand line before starting dobbing with bread by the island which was about 10 metres. The action here is usually instant but after a cold night it was a slower start than normal, I was first to catch with a tiny roach which I chucked back and then Smithy got off the mark with a carp.

There were carp cruising about in the open water so I went to 11.5 metres to my left with the dobbing rig and had my first carp and number two followed shortly after. The Tart and Hoffy were soon into fish as well but I was managing to stay ahead of them and after an hour or so I had five with three the next best.

Just when I thought we’d be in for a good day, they shut up shop, even though the carp could still be seen cruising around. I came in on the maggot line and first put in the float buried but a small perch wasn’t the result I’d hoped for, I put a grain of corn on and after a few minutes a positive bite saw me net a nice 2lb+ skimmer. A small carp followed and with the others struggling I was now several fish ahead. Moving to the corn and micros line I had a nice roach and another carp and thought I’d just be able to swap between the two lines and hopefully continue catching well.

Then in a repeat of yesterday, it started raining quite hard and got very cold. The Tart was having a bit of a nightmare which wasn’t helped when he went to pick up one of his top kits to find the rig was tangled in the brambles. He stood up to try and free it and then there was that horrible sound of a pole section sliding towards the water, he tried to grab it, breaking a number four section in the process but was unsuccessful and a rather expensive 11 metre section disappeared into the depths!

With three hours gone I had nine carp, that decent skimmer plus a couple of small fish and was well ahead, The Tart’s head had understandably gone and things weren’t helped when his next fish was an eel! Then Hoffy started getting some decent fish fishing in the corner and Smithy had a couple of carp from the end bank, I still wasn’t too worried as all I had to do was keep putting the odd fish in the net to stay ahead and a decent 4lb ghostie helped my cause.

As I said earlier, the day is just a bit of fun and a good laugh so when some rules started being bent somewhat, nobody was too worried. Hoffy had started feeding some floating bread and catching shallow in the corner, The Tart got his other pole out and went past peg 3 on his left and up towards peg 4!

Smithy started catching well and with Hoffy getting some lumps, it was all getting rather tight and I went from sitting pretty to hanging on! Then to compound my misery, The Tart began one of his legendary comebacks fishing bread about 6 inches deep in peg 4! This caused me to panic and I went into head wobble mode! I plumbed up by the island and also up by the inlet and toss potted in a few micros with corn on the hook but no bites and I didn’t know what to do next.

The Hoffmeister was still bagging and nobody would be stopping his charge to victory and I was also sure that both Smithy and The Tart had overtaken me, there wasn’t much in it for second place but I needed to find a couple of fish from somewhere! With all rules out the window I threw in some bits of bread but nothing was coming up for it, even the dead duck wasn’t interested! I decided to go back to fishing my two short lines and another decent skimmer quite quickly had me thinking I’d made the right decision. It hasn’t happened though and whereas I bumped two fish, Smithy had several more and The Tart hooked a fish on the whistle.

My final tally was 11 carp, 2 skimmers, a roach and a perch which I thought would go 35-40lb, we packed up in the rain again and as I took my kit to the car, I asked how many The Tart had and he said he didn’t know, possibly 12 or 13 so I knew I was losing another nugget. We started with Hoffy and he weighed 50lb, Smithy was next and weighed 42lb odd and then The Tart had 44lb so that last fish was crucial. My silvers went 5lb and my carp 34lb so I went from leading most of the match to last! 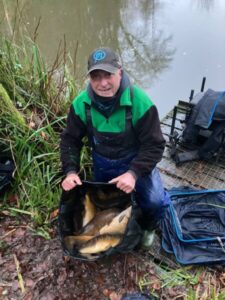 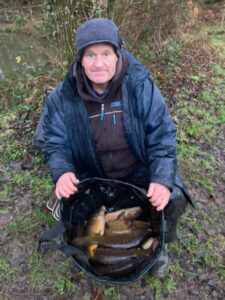 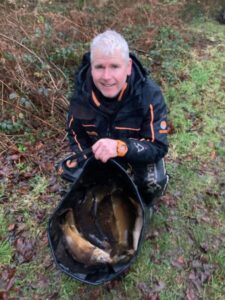 The Tart was second with 44lb from pegs 2, 3 and 4 although he’d had a bit of a nightmare 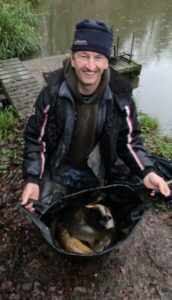 My match fishing year ended with a rather damp squib!

Typically with the match ended there were carp demolishing the bread I’d chucked in and with hindsight I should have gone 14.5 metres in the open water with the shallow rig and bread as odd fish had been cruising there all day or gone to my right towards peg 4 like The Tart had. So laziness has cost me today but I was sure I’d get a few more short and I did bump two late which would have probably been enough for second.

Smithy had brought a rather lovely homemade jam sponge which we polished off after the match and I paid The Tart his nugget which along with his winnings would go towards a new section!

So a very familiar day to the last Bonus Bash, Hoffy drew peg 8 and won, despite having a clicker, The Tart somehow lost count of his fish and I was last on the pond, still we had a laugh and caught plenty of fish, roll on next year!

On my way home, it was announced we were going into tier 4 so match fishing is effectively cancelled yet again and I’m guessing it might be a while before it resumes, depending on how long, I might well drag myself out somewhere pleasure fishing if the boredom becomes too much!

Update – The Tart went back out the pond the following day with his son and a dinghy and managed to get his pole section back so that saved him a fair few bob!

Next up – Who knows!