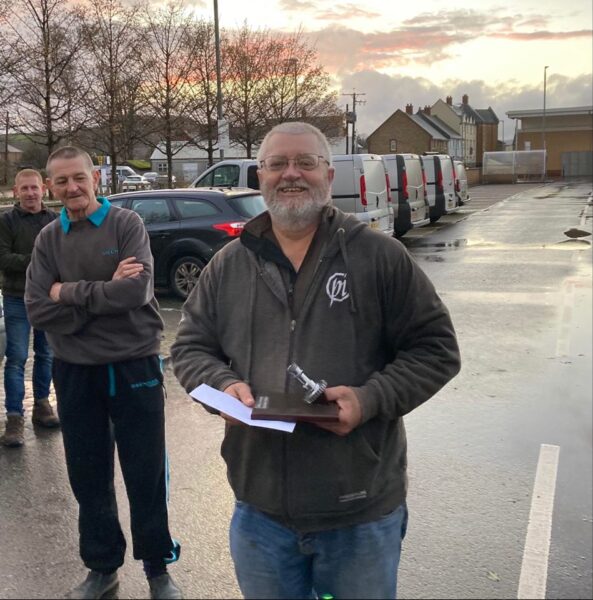 I always look forward to the Xmas Fayre as there’s normally a good turnout and this year was no exception with 22 anglers booked in. Along with all the regulars it was lovely to see Russell Hilton again, Dylan Moss joining us for the first time and it was especially nice to have Neil Dring back for his first match in ages. We had a socially distanced breakfast at the bowling club which was superb (can you tell I’ve missed my breakfasts!) and Drew and his team did a fantastic job of looking after us.

After Rob had welcomed everyone, it was time for him to decide our fate for the day, the sections being used for today’s match were Upper Coxes, Isle Brewers, Hambridge and Midelney and most people were hoping to avoid Coxes as it doesn’t normally compete with the lower end of the river. My name was first on the list and Rob delved into the bucket and pulled a ball out, I was hoping to hear the numbers 126 or 129 but was gutted to hear him say I was on 19 at Coxes. It hasn’t been used for years and was a bit of an unknown quantity but in my heart of hearts I feared the worst and knew I wouldn’t be taking the trophy home again this year!

Arriving at my peg it looked quite nice with a tinge of colour although there was too much pace across but there was some steadier water in the middle of the peg where there was a deep hole. I set up a couple of 1 gram bodied floats, one for the middle and the other for down the peg on the inside. On the side tray I had casters, red maggots and Bait-Tech Super Seed Hemp. 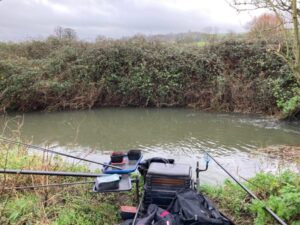 I started down the middle with single red maggot on the hook just to see if I could get a bite, I was feeding hemp and casters above me and also down the peg on the inside. Normally if there are some chublets and dace in the swim, you’ll catch quite quickly but after ten minutes I hadn’t had a bite, not even from a minnow! Eventually the float’s gone under but as soon as I struck I knew it was a trout and the writing was already on the wall. 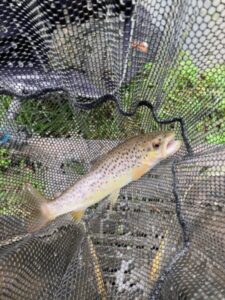 Another spotty next chuck and then to add to the fun, it started raining hard, the wind got up and I wasn’t enjoying myself very much! I had two more trout before hooking a small chublet that came off as I shipped back, then I hooked what felt like a slightly better fish but that came off as well! The next fish was a tiny chublet but there was no danger of me mounting a charge for the title unless things improved dramatically!

I tried down the peg for the first time but no bites and I was just going through the motions, Russ phoned from peg 124a at Isle Brewers and said he was struggling, he’d caught a few fish but the wind was making it difficult to hold the pole. He did say Digger above him on 124 was getting some nice roach and Hurf had caught a couple of nice chub on 123 but it was also hard going for some of the others down there.

Another go down the middle resulted in two more trout and another small chublet but with the river starting to rise, it was churning up, so with ninety minutes left, I grabbed my flask and went for a walk. Leighton was on peg 17 by the bridge and said he’d caught chublets and dace really well until the river started to come up and when I got up to ‘Bagger’ Burton in peg 15, he said the same and had also caught loads of trout.

I popped up to see Jake in ‘The Tank Traps’ and it was a similar story for him, he said he’d bagged up for the first hour and a half but it was now raging through. He was still catching though and had a couple of chublets and lost a better fish while I was there. I headed back and caught two more chublets and another trout and my final tally for the day was four little chublets, two minnows and seven trout! Due to the circumstances, there wasn’t a prize giving this year with everybody receiving a £15 tackle voucher and I knew I wouldn’t be winning the section money so I chucked back my 2oz to register my first DNW for a long time.

Neil had struggled on peg 20 for 2lb 4oz but then Leighton had done well weighing 7lb 7oz, Bagger Burton had 5lb 8oz and then we got to Jake and he had a lovely net of mainly chublets (plus a decent hybrid) to weigh 16lb 9oz, a fantastic weight on the day. 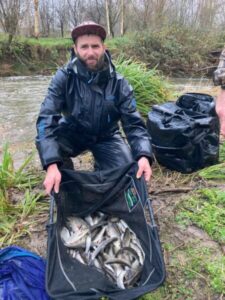 We met back at Tesco’s car park for the results and given the weather, there had been some brilliant results recorded, John Dursley had the top weight on the day with 17lb 5oz from peg H5, he had loads of roach and a big chub, Jake was second, Big Frank and Baz were joint third with 14lb 2oz apiece, both caught nets of quality roach, Frank was on H6 and Baz was on peg 2 at Midelney. 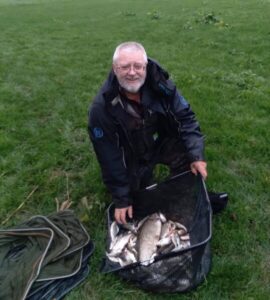 John had the top weight with 17lb 5oz from peg H5* 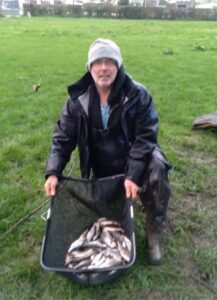 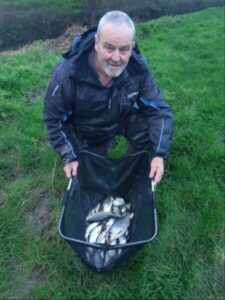 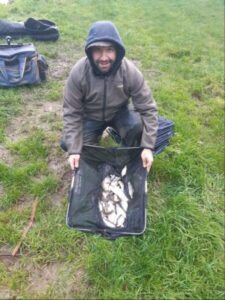 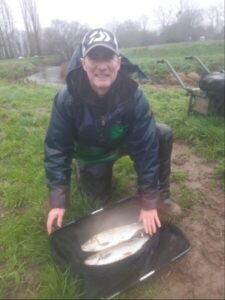 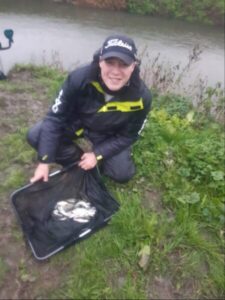 There were a few others in the DNW club with me so here’s the roll call, Rob, Tony N, Terry ‘The Toast’ (so that side bet was quits), Nick P, Dave P and Russell. 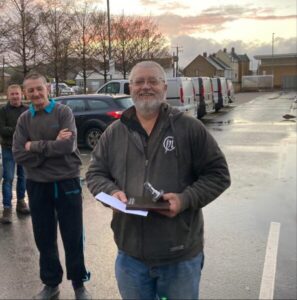 Winner on the day, John Dursley, with the Chris Patten Memorial Trophy

Given the conditions, some brilliant weights were recorded and it was fantastic to see several pegs producing good nets of fish at Coxes.

Before I go I would like to say a big thanks to Rob Cox for organising the match in difficult circumstances, all the lads who’ve been down the river sorting out the swims, Drew and the bowling club for looking after us, John at Enterprise Angling for sorting the vouchers out, Baz Morgan for his continued, very generous sponsorship of the event and Ron Sams who donated £100 to Cancer Research which was a lovely gesture. Last but not least, thanks to all the anglers who make it such an enjoyable day.