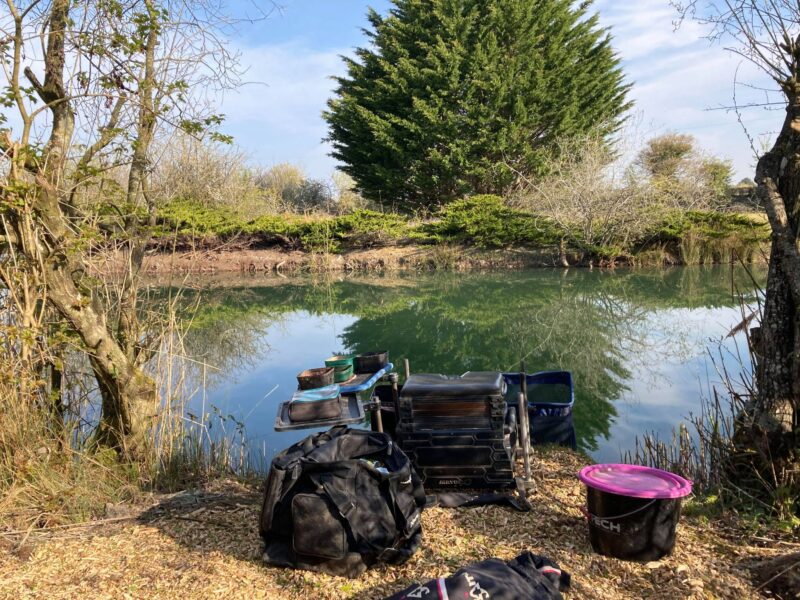 Bird’s Quarry is owned and run by HMS Heron Angling Club, as part of the MOD, it’s a private club for serving members, veterans and their family but Stoke have an arrangement where they can fish it a couple of times for charity matches. I wasn’t on the list for this one and was gutted as I really wanted to fish it but then a few anglers weren’t able to make it and my name was next out – result!

Another early start and another frost!, Greggs at Podimore was todays socially distanced meeting location and we then all headed off in convoy behind Toastie who knew where he was going. After a short drive we were turning into the car park at the venue and got our first look at the lake. It looked gorgeous with an central island and then the pegs at the top end had a bit more open water.

Adam who runs it was there to give advice and also weigh in any carp that got caught so they could be returned straight away. After paying our pools, it was time for Sam to draw for us and when it was my turn, he pulled out peg 4 which obviously meant nothing to me but apparently I was on one of the island pegs on the right hand side. As I plonked my box down, I could see it was very clear and also pretty weedy but with odd roach topping and a couple of rather lumpy carp swimming about, I couldn’t wait to get started. 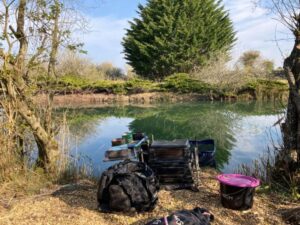 In the last match here it had been quite tough with 10lb of roach enough for second so I’d decided I was going to fish for silvers and only have a go for carp if they started showing. Not really knowing what to expect, I had a lot of different bait options with me, red maggots (wrigglers and static ones), casters, micros, 6mm pellets, corn plus Bait-Tech Special G Green and The Juice groundbait.

I set up a 0.4 gram Drennan AS5 Pencil float to fish on the deck at 11.5 metres, a Guru 0.3 gram AR for fishing shallow and a Drennan Crystal Dibber for banded pellet shallow if any carp were cruising about. Plumbing up, I was struggling to find a clear spot and the plummet kept getting snagged in the weed and I was already starting to think I might end up fishing shallow for most of the day. I was ready with about ten minutes to go so had a walk round the lake, all the anglers had plenty of room and Steve P was the next angler on my right two pegs away, Terry was on a lovely looking swim with reeds in the corner and Chris N and Sam were on the open water pegs.

Next along was Harry on peg 9 then Rob and Andy were on 10 and 11 with Aaron on 12, Lee S had drawn peg 1 with Dan next door on 2 and Lee T was on peg 3. Quite a few people said they’d seen carp moving about but would they feed? I had a nugget with Steve on silvers, two with Andy (one for overall and one for silvers) and it was double or quits with Rob from last week.

On the whistle I cupped in two balls of groundbait at 11.5 metres and started with double red maggot on the hook, I was expecting to get bites straight away from small fish but the float just sat there and after ten minutes, I still hadn’t had an indication! Dan was getting the odd small fish, I’d also seen Lee catch and then Sam struck into a fish on his tip rod, it was obviously a good fish and he landed a cracking tench, he called for the scales as he didn’t want it in his net all day (fair play mate) and it went 5lb 7oz, lovely fish and a great start for him. Photo credit – Sam Hinton* 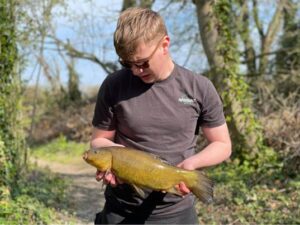 Finally, after twenty minutes, a positive bite resulted in some elastic coming out, I went to ship back only for it to weed me so I had to push the pole back out and thankfully it came free and I netted my first fish which was a perch of 2oz or so. Next put in was a repeat performance but this time the fish came off in the weed! I heard Sam say he could see some carp on the top so Chris N cast a pellet waggler at them and was into a decent fish, he landed it safely and at 8lb 6oz, it put him into a commanding lead.

Less than an hour into the match and with only a few ounces in the net and two bonus fish already banked, my plan to fish for silvers was already looking slightly flawed! I was still getting odd bites but lost a few fish in the weed shipping back so I picked up the shallow rig and missed a bite first put in, then had a chunky roach before missing another indication and thought I’d cracked it but of course then went ten minutes without a bite! Obviously it was so clear that they were spooked by the pole, back on the deck I had a couple more fish but I was going nowhere fast.

Steve P netted a decent fish and then Terry wandered down to see how I was doing and said he was catching small fish quite well and it was looking like I needed snookers (or a bonus fish) already! With two and half hours gone, I had a dozen fish for less than a pound and then the float sailed away and when I struck, I was met with solid resistance and this was no lump of weed! Rather a lot of the new Daiwa Pink Hybridlastic exited the pole tip as a large fish headed off to the left and weeded me solid before the 0.10mm hooklength gave way – great!

I had one more small perch but decided I needed to catch a bonus if I was going to do any good, so set up a rig to fish corn on the deck with 0.15mm to a size 16 Guru Kaizen hook and another rig to fish by some reeds on the far bank at 16 metres with banded pellet. I cupped in two pots of micros and corn at 11.5 metres and left it to settle while I fished across, pinging pellets and lifting and dropping the rig. Well not a lot to report after that as I never had a bite on either line!

Rob wandered round and said they hadn’t caught opposite so at least the side bets were safe, towards the end of the match some roach started topping again but another try shallow with caster was fruitless. Dan had packed up and chucked back which surprised me as I knew he’d caught quite a few small fish. Adam started the weigh in and Lee S on peg 1 and Dan both didn’t weigh, Lee T had 12oz which included a little golden orfe and then my 13 fish went 15oz, Steve P weighed 1lb 3oz which included a nice rudd and then Terry had done really well, getting his head down to catch loads of small roach and rudd for 7lb 8oz (and he managed to keep his fingers intact this week!). 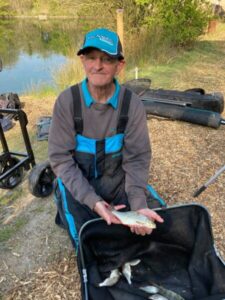 Steve P had 1lb 3oz which included a nice rudd 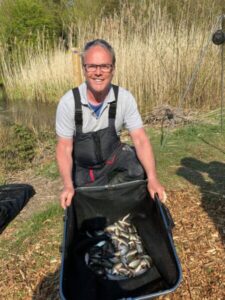 After catching his carp, Chris also went for bits and added 1lb 14oz to give him 10lb 7oz and a comfortable win, Sam hadn’t added to his early tench but his 5lb 7oz was still enough for third place. Then pegs 9 to 12 didn’t weigh in although I think a couple of small fish had been caught! 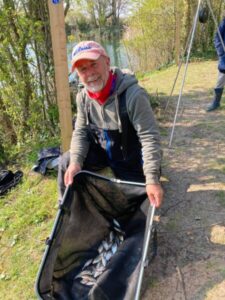 Chris added 1lb 14oz of rudd and roach but didn’t need them after catching his early carp and could have got his deck chair out for the rest of the match!

As it was another charity match the pay out was the same as last week so the money was well spread and I actually ended up winning the silvers by triple default and picked up £20 plus double nuggets off Andy and Rob but lost one to Steve. I should have just carried on catching roach and perch as I probably could have done 2lb or so but I honestly didn’t think that would be any good.

So a tough day for most but it’s nice to fish different places and another £135 went into the charity pot which is building nicely. The club would like to thank Adam and HMS Heron Angling Club for allowing us to fish their lake.

We’re at Summerhayes on Longs next week and with 26 booked in, it should be a good match.