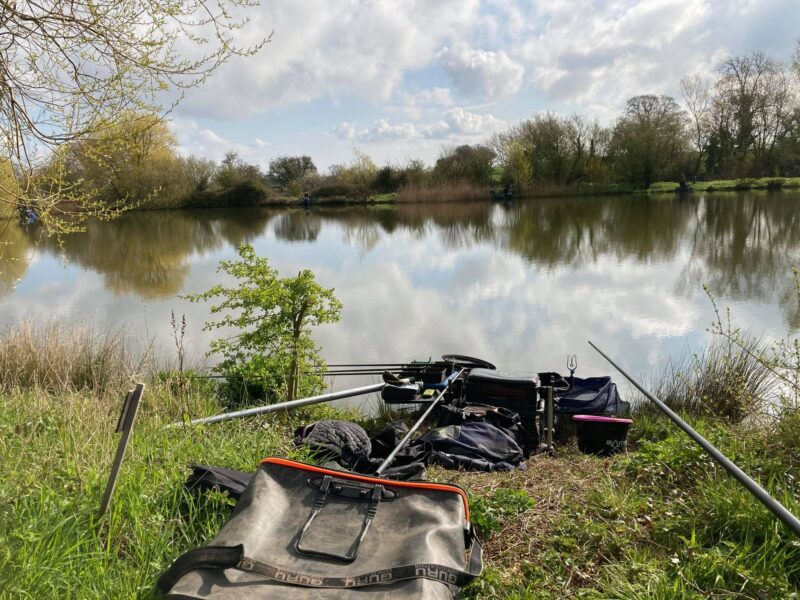 The charity matches run by Stoke are always very popular but with only a dozen swims around the pond, there are always more people wanting to fish than available pegs. In a bid to try and make it as fair as possible, everybody who wants to fish puts their name down and for the first match, twelve names are drawn out of the hat and then the unlucky anglers have first refusal for the following match. If people can’t make it, their place is offered to the next person on the list and so on.

With the draw at 8:30,The Breakfast Club decided to meet at Greggs near South Petherton which opens at 8:00 so we could grab and go. Then it was onto Stoke Memorial Hall for the draw, most people were already there and we paid our pools and waited for Sam Hinton to decide our fate. Everybody was hoping for the flier peg 4 but failing that, the pegs either side would do me. The first few names were drawn out of the bag and when it was my turn, the three I wanted were still in there, Sam stuck his hand in and pulled out peg 3, that’ll do!

Lee Tucker was the lucky angler to get peg 4 and then it was a mixed bag for the rest of the Breakfast Club, Rob was on 9 on the far bank and The Pole and The Toast were next to each other on 11 and 12. With all the pegs allocated, we headed to the pond, after a frost it was shaping up to be a glorious sunny day which, although nice for the anglers, wasn’t ideal fishing weather! 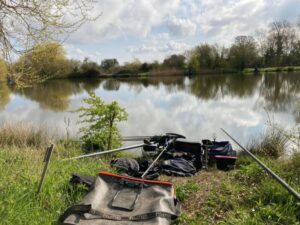 I set up a 0.6 gram Drennan AS5 Pencil float to fish two lines at 11.5 metres, one with micros and corn and the other with groundbait and maggots and also a 0.6 gram Guru Wire Pinger for fishing towards the reeds to my right. It was a rather full side tray today, I had red maggots (alive and dead), corn, micros, expanders and some Special G Green and The Juice groundbait.

In the last match here, I’d drawn on the far side which normally struggles to compete with the low numbers and I ended up fishing for silvers and had a lovely day catching two chub, five skimmers and loads of roach and rudd for 10lb 15oz. So if I’d drawn over there, my plan was to fish all out for silvers but I’d also decided to feed a line for silvers wherever I was, as very often people catch carp well for the first two or three hours before they shut up shop.

The Grand Wizard got us underway with a very musical toot of his whistle and I fed a modest amount of micros and corn straight out and then two balls of groundbait containing some dead reds on the left hand line. I decided not to feed by the reeds until I was going to fish it. Starting on the micros/corn line, I was expecting to get bites quite quickly but that didn’t happen and looking around the pond it was slow for everyone, Sam on peg 6 was the first to get off the mark with a carp on the method.

I was toss potting in a few micros and lifting and dropping the rig but 15 minutes passed without an indication and I was just thinking about trying the other line when the float buried and carp number one was on, it was a decent fish too, about 4lb. Thinking they’d moved in, I shipped out again and was like a coiled snake waiting to strike! Another quarter of an hour passed before the next bite and I missed it! I had a little 4oz carp and then just before the first hour was up I had another nice one of 3-4lb and although I wasn’t bagging, I was doing alright as far as I could tell. Chris Norton next door on peg 2 had caught a nice carp and I’d seen Jake over on 8 land one as well although I couldn’t really tell how pegs 4 and 5 were doing.

I had a quick go on the groundbait line with double dead reds on the hook and caught a couple of nice roach but was waiting ages for bites. The Grand Wizard walked by from peg 5 and I asked if he was getting another keepnet but he said he was struggling and going to get his feeder rod. Back on the other line with corn on the hook and it still wasn’t happening and I was thinking I might have to go into the Lion’s Den of the reeds much earlier than I would have liked! Quite a few carp could be seen swimming about shallow and I wished I’d set up a mugging rig, I did try dangling my corn in front of them (nothing new there then!) but they weren’t having it.

Harry turned up to see how we were doing and it’s always lovely to have a natter with him, just after he left me to it, I had another little 3oz carp on corn followed by a roach of a similar size. We were now two and half hours in and everybody was struggling so I went back on the maggot line to see if I could just keep putting odd fish in the net. First drop in, the float didn’t settle so I struck expecting a tiny rudd but a decent amount of elastic came out and I shipped back carefully before netting a nice skimmer of 8oz or so, two more followed and I was starting to enjoy myself.

Toss potting in maggots every put in I started getting regular bites from roach and the odd little pastie carp and then hooked a fish that went off on a powerful run but as soon as it stopped I knew it was foulhooked. I got down to the top kit but was having real problems trying to reverse it into the net and then managed to knock it off while trying to scoop it, ‘Oh bother’ I said! On a hard day, I was hoping that fish wasn’t going to cost me, then blow me if I didn’t hook another not long after and this one was fairly hooked, I took my time as I really wanted to make it count only for the hook to pull out at the net, ‘Oh double bother!’ I said feeling really rather peeved!

I was catching some nice roach, little pasties, odd tiny rudd and also had two more decent skimmers (and pulled out of two as well), I also hooked three more carp and managed to land them. Chris N had caught a couple of skimmers as well and I reckon there are a lot in there, a silvers match would be interesting! The Toast and The Pole didn’t seem to be doing much although Terry spent most of the match with his arm above his head and I didn’t know whether he was having problems with glare from the sun or something.

Going into the last hour, Ady over on peg 7 packed up and Rob decided he’d had enough as well, I had intended to go by the reeds for the last period of the match but as I was still catching odd fish, I didn’t see the point of possibly wrecking rigs and losing hooks! The Grand Wizard called an end to proceedings with another toot of his whistle. I’d ended up with five decent carp, around a dozen pasties, five skimmers and some roach and rudd.

Sam walked round to do the weigh in, Aaron recorded a DNW on peg 1 and then Chris N had 8lb 4oz, my five carp went 17lb 8oz, the pasties added 4lb 9oz and then the silvers weighed 3lb 14oz to give me a total of 25lb 15oz. Lee on peg 4 had some nice carp but had lost several, he had 11lb 10oz to go into second spot. 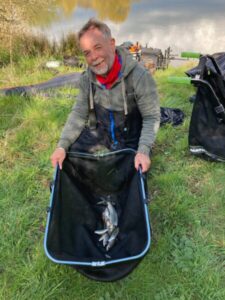 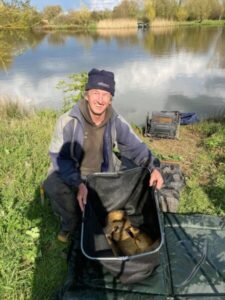 I had a really enjoyable day and weighed 25lb 15oz 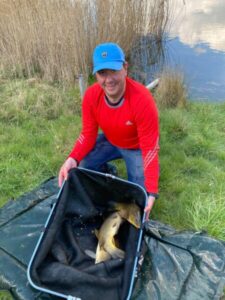 Lee had 11lb 10oz of mainly carp for second place

The Grand Wizard on peg 5 had some pasties (cheese and onion I think!) and a pound of silvers, Sam’s two carp went 3lb 10oz and then Jake on peg 8 had 5lb 13oz of carp on the method, Dan M on 10 had two carp for 4lb 4oz, Steve P had 14oz of silvers and then The Toast had 1lb 9oz but had got off to a disastrous start when he’d sliced open his finger cutting down some branches and he’d fished all match with his hand above his head to try and stop the bleeding! Rob did a great job of patching him up with his first aid kit but he still ended up going to A & E. 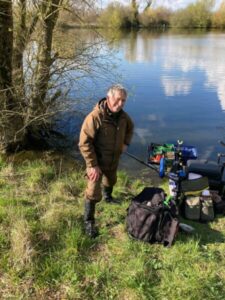 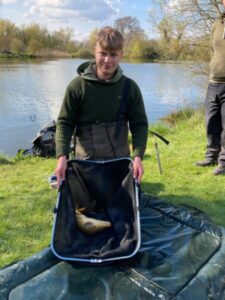 Sam had two carp to win the section with 3lb 10oz 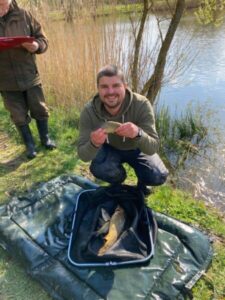 Jake was fourth with 5lb 13oz from peg 8 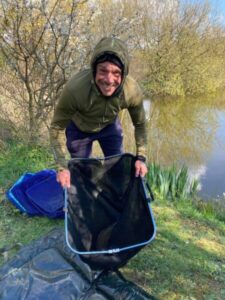 Dan won his section with 4lb 4oz from peg 10 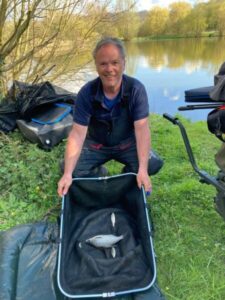 The Toast was wounded in action and received The Purple Heart!

So after a really, disappointing return to match fishing last weekend, it was nice to have a better day today (and saved me putting my kit on ebay!), I picked up £40 which helped pay for the day and as it was a charity match and a bit of fun, Chris had decided to spread the money around, with seven people taking home an envelope.

So a difficult day for most but I always enjoy fishing at Harry’s and it was a lovely day weather wise in great company and all for a great cause, we raised £188 for the Oncology Unit at Yeovil Hospital. Thanks as always to the Hebditch family for allowing us to fish their pond and to all the anglers for supporting the charity.

Next week is another charity match at a new venue for me, Bird’s Quarry which is near Somerton, I don’t know much about it but I always get excited about fishing new places so I’m really looking forward to it.

I can’t go without saying a big well done to my mate Russ Hilton who won the Taunton match on the canal on Sunday with 4kg 725g of roach and a bonus bream and had a nice pick up as it was also the golden ball.

Next up – Bird’s Quarry