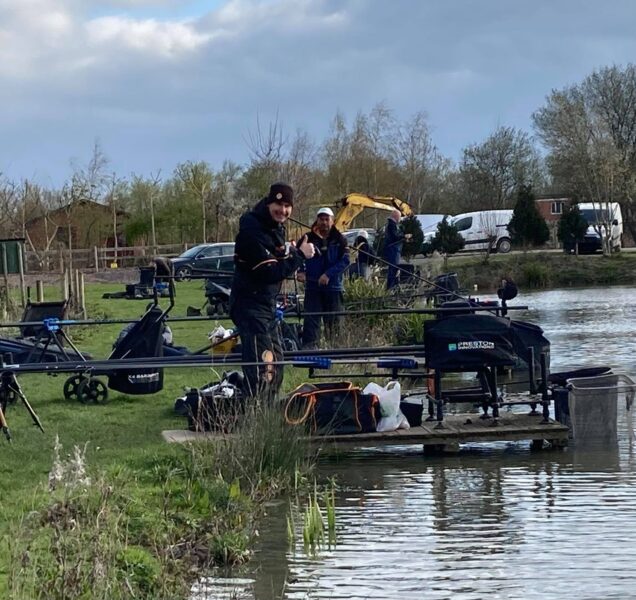 My third match in four days and I must admit I was starting to flag a little as I struggled to get my ancient aching bones out of bed! I stopped off at Greggs but it wasn’t open so had to settle for a bacon roll over at Costa, so not the best start and I hoped it wasn’t an omen! It was also chilly with fairly strong winds forecast so we could be in for an uncomfortable day weather wise!

On arriving, the usual suspects were there and it was nice to see Heardy again, The Tart was fishing today and like me it was his third match and he’d had two poor days previous as well. It was on Sellicks today which is probably my favourite lake at Summerhayes. It’s a U shaped pond and the better silvers pegs tend to be down the arms (1-11 and 17-23), Pete announced the draw and I was the third name on the list, he delved in and pulled out peg 15 (thanks again Pete!), it’s one of the pegs on the U, it can be good for carp but it’s also set back a bit from pegs 14 and 16 and for added fun, guess who was on 16? Yep, The Torquay Tart, I went back and checked under my car to make sure I hadn’t run over a nun on the way to the match!

Elsewhere, Glynn was on 17 which is spot on for silvers, the golden peg was 23 with Mark Leahy on it, Jeff had peg 6 drawn for him and Roy was on 11. Chris W and Geoff Young were also fishing today and I hadn’t seen them for ages, they were on pegs 19 and 5 respectively. Taking my kit to the peg, the wind was already causing problems and Mark’s groundbait bucket lid had been blown into the pond! 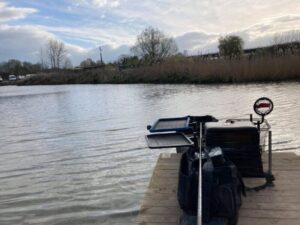 The view from peg 15 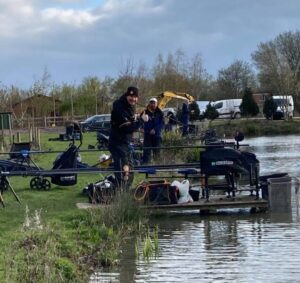 Not what I wanted to see on the next peg!

I set up a 0.4 gram Malman Pencil to fish top two plus two and 10 metres and then a 0.3 gram NG Mini Gimp to fish the top two straight out. On the side tray, I had 4mm Bait-Tech Xpands, red maggots (dead and alive), micros and groundbait was Special G Dark and The Juice mixed 50:50. Pete got us underway and I potted in small balls of groundbait on all three lines and fed a few maggots on the inside to my left.

I started on the top two line with a 4mm expander, Glynn had a decent skimmer first chuck and when he had another straight after, I picked up the other rig and went out to 10 metres expecting to get bites quite quickly but the float just sat there! The Tart was fishing across to the island and not catching either and with Rob Dodd on peg 14 catching carp and odd skimmers across and Glynn now on six or seven skimmers we were getting battered!

In fact in took nearly 50 minutes before I had a bite, which of course I missed! I then missed another before finally catching a small 4oz skimbob with an hour on the clock! The Tart lost one across before finally getting off the mark with a carp. I had little spells of bites and added a couple more skimmers and roach along with the odd carp and had one do me under the pallet. To be honest the wind was bitterly cold and it wasn’t much fun.

As always I was dripping in a few micros on the top two plus two line but would leave it until the last couple of hours before trying it. I’ve bumped a couple of fish on the longer line and also had four decent fish come off. I try and strike a compromise when fishing for silvers and use blue hydro which I think is soft enough for skimmers but also lets you land carp without too much fuss (I’m not one for trying snap off when I hook them) but today I definitely should have switched to yellow hydro especially as I only hooked four carp all day!

The Tart started getting a few indications on his margin line and hooked a carp only for the hook to pull out and the look of anguish on his face was almost comedic and it set me off with a fit of the giggles! I looked back at float and it was nowhere to be seen, I struck and it felt like a decent fish and things got even better when a nice crucian of 1.5lb popped up! That was pretty much the highlight of the day, I tried the top two plus two line and never had a bite there and despite feeding the inside to my left with maggots all day, I didn’t even try it!

I did have a couple of net roach in the last hour but once again I was ready for the whistle to be blown and I was sure my final tally of eight skimmers, four roach and one crucian wouldn’t be any good today. I packed up, chucked back my three carp and took my kit to the car before catching up with the scales round the other side. Gary T on peg 2 had 71lb 15oz of carp, Bill didn’t weigh on peg 4, Chris W had 32lb 6oz from peg 5 and then we got to Jeff who was saying he’d give me a pound and he only had 3lb, he weighed 6lb 8oz and I was sure I didn’t have that.

Martin was next and had some lumps in his 77lb 2oz which put him in the lead, silvers maestro Roy was on peg 11 and had 9lb 4oz which included some nice skimmers, Rob B had chucked back on peg 13 and then Rob Dodd weighed a brilliant 95lb 5oz to go in front. I was next and my silvers went 5lb 8oz, The Tart had 34lb 10oz so the side bets were quits as we had a pound on carp and one on silvers. Glynn had caught steadily all day and put an excellent 12lb 10oz on the scales so I gave him his nugget back from Friday. 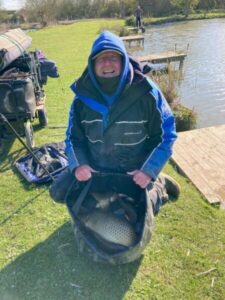 Martin had 77lb 2oz which included some lumps 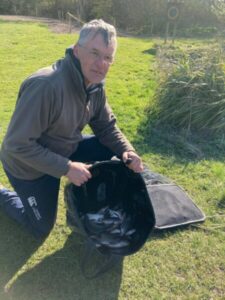 The ever consistent Roy had 9lb 4oz 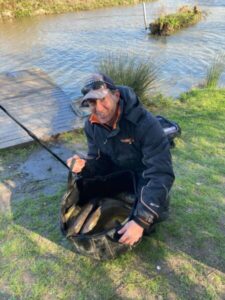 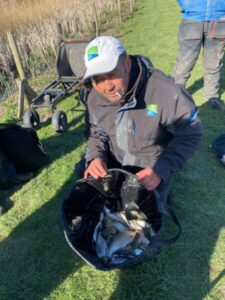 Glynn had a lovely net of skimmers for 12lb 10oz 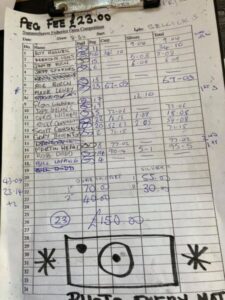 I’d been so looking forward to fishing matches again and I have to say I drove home feeling really flat, a massive anti-climax and I felt like the kid who got a broken toy for Xmas! Don’t get me wrong, it’s not that I’m not glad we can match fish again and it’s not just that I’ve had a few bad days, it’s more than that. I’ve just not enjoyed myself at all, it was great to see everyone again but less than inspiring breakfasts and having to eat outside haven’t helped, it’s cost me a fortune and I haven’t caught very much.

To be fair I don’t think my pegs on Friday and Monday were great for silvers but I had a chance today as I lost four decent fish, bumped a couple and missed several bites so second in the silvers was distinctly possible but I’ve fished like a bit of a numpty. I had dead reds with me but didn’t put one on the hook (Glynn caught on them) and only briefly tried an expander pellet which Roy caught on.

It’s funny, I put an April’s Fool post on Facebook saying I hadn’t missed fishing that much during the lockdown and was going to sell my gear, but that wasn’t too far away from how I was feeling when I got home Monday evening! Now a few days later, I feel a bit better and I’m looking forward to the weekend although another bad result and there might well be some bargains to be had on ebay Sunday night!