For the first Summer League match we had 16 anglers booked in which is great to see, especially as it was touch and go whether it was actually going to happen with nobody to run it! Fair play to Jake and Leighton who basically had it dumped on them, Jake actually didn’t fish because he had a bad back but still gave up his Sunday to be there for the draw and to do the weigh in!

After paying our pools etc, it was time for the draw and as it was my birthday (okay, last time I promise!), I was hoping to be on peg 16 but was more than happy when peg 14 was pulled out for me. The sun was threatening to make an appearance and it was shaping up to be a nice day, certainly compared to my last match, which was a relief as I was running out of bait boxes! 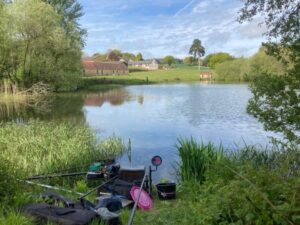 Peg 14 looking up the pond

I set up a 0.4 gram Perfect Gloucester with a 0.10mm bottom to size 18 Guru F1 Pellet hook for 10 metres, a little Preston Chianti for fishing shallow and with some tantalising reeds and lilies to my right, I set up a Drennan 0.4 gram pencil with a size 16 Guru Kaizen to 0.15mm to take no prisoners!  Along with the usual maggots, casters and hemp I opened a tin of corn and groundbait was my favourite Pro Nat Dark and Extra groundbait.

On the whistle, I cupped in two balls of groundbait at 10 metres and a pot of casters, corn and hemp by the lilies before starting over the groundbait with single red maggot on the hook. I had a small roach first put in and it was a bite a chuck, after sixty minutes I had 28 fish, mainly roach with a few tiny rudd on the drop. The fish average an ounce apiece so around 1lb 12oz which would be good if I could keep that up but I knew it wouldn’t last.

Going into the second hour, I was still getting bites and tried double maggot which resulted in a couple of slightly better roach but my catch rate was already slowing. Also the wind was blowing into the bottom bank and there was loads of floating crap which meant I had to stand up to ship out which wasn’t helping, Neil on peg 16 and Chris on 17 both had it as bad if not worse, at times Neil couldn’t fish and Chris was fishing a waggler as he couldn’t use the pole.

Jake came round and said Rob on peg 1 had a decent chub first chuck so he was off to a good start, he also reported Baz was catching well on whip but lots of people were struggling. I’d seen John D over on peg 21 net a decent fish and Gordy on 23 had landed a chub so some bonus fish were showing. After two hours I was up to 46 fish (around 3lb) but bites were slowing up, I had a quick go shallow but no indications so it was back on the deep rig and just picking up odd fish, most fish were now coming as the rig was falling through the water and once the rig settled, it would just sit there.

Neil Dopson came out to take some photos again including a rare one of me in action (below), have a look at his page for loads more great photos – Neil’s page. 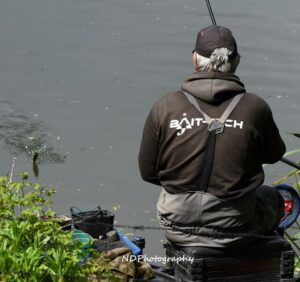 As we reached the 3.5 hour mark, my bites had dried right up and as I’d seen John net another fish, I had a quick look on my bonus fish line which I’d been topping up every hour, I gave it ten minutes or so with corn and then tried treble dead maggot but not a sniff. Back on the other line and a quick flurry of fish before it died again, Jake came round again and said it was fishing really hard and that 5-6lb would probably be a good weight today.

I could see Neil and Chris were still catching small fish quite well and thought they’d be there or thereabouts. Odd fish were still topping so I stuck another section on and laid the rig in and the float went straight under! The rig was all wrong really but I started catching quite quickly including some chunky roach. Chris Norton turned up to see how we were doing and it was lovely to see him as always, while he was with me, I noticed Terry ‘The Toast’ over on peg 5, shipping back very carefully with loads of elastic out so Chris went to see what a proper fish looked like!

With only around half an hour left, I thought I needed a bonus fish if I was going to do any good so had another look on my big fish line but with treble caster this time, still no bites and with just ten minutes remaining I went back out long and had a couple more roach and then hooked a better fish which turned out to be my best fish of the day, a quality roach of 6-8oz. I still had time to go back out and had one more roach to finish with 104 fish, which at an ounce apiece would give me 6lb 8oz. Leighton on peg 8 had fished the feeder for most of the day and caught several smaller skimmers but just before the end, he landed a better one.

I wasn’t really sure how I’d done as I heard Baz say he had 200 fish, I knew Chris and Neil had caught well and then several people had caught bonus fish as well. After packing up, I caught up with Jake and the scales at John D who had two chub plus a few smaller skimmers for 4lb 12oz. Gordy on 24 had already weighed 2lb 5oz and Steve P had 2lb 13oz from peg 22. *Thanks to Jake Woodard for the photos. 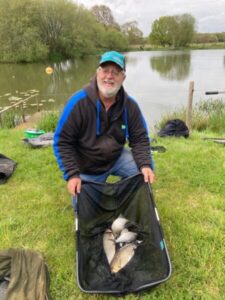 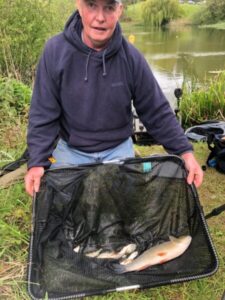 Gordon had a chub plus some small fish for 2lb 5oz* Tony had chucked back on 19, Danny B on 18 weighed 3lb 14oz which included a nice chub, Chris H had loads of small fish and weighed 8lb for the second match on the trot, Neil P also had lots of small fish for 6lb 8oz on peg 16. Then it was my turn and I knew it was going to be close so was relieved to see the needle go past 7lb and Jake called it at 7lb 4oz. 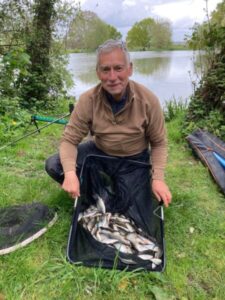 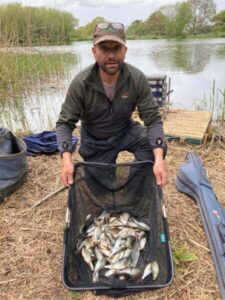 Then it was Baz and his 200 fish went 9lb 12oz which would be enough to win again, Fieldy had 4lb 2oz on peg 9 and then Leighton just pipped him with 4lb 3oz from peg 8. Dave P weighed 1lb 4oz on peg 7 and then Karl had 2lb 7oz from peg 6 and his porn star ‘tache was still looking magnificent! Terry ‘The Toast’ weighed 3lb 12oz and gave me a nugget to go with the one I had from Steve P. Ian ‘Bagger’ Burton had lots of small fish for 4lb 6oz from peg 2 and that left Rob on peg 1, he’d had two nice chub and a few bits for 6lb 11oz but had lost seven chub and just one of those would have probably been enough to win. 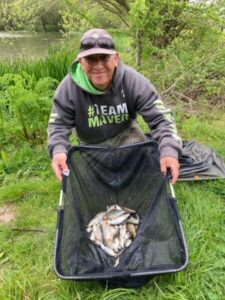 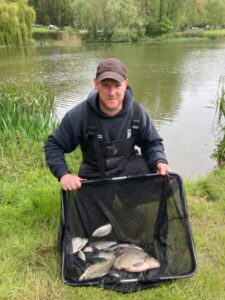 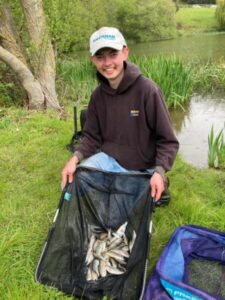 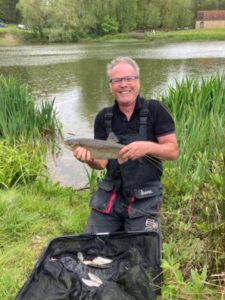 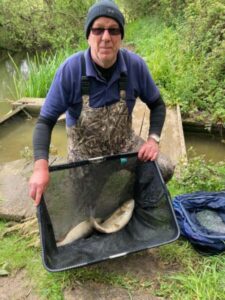 So a nice pick up of £50 on my birthday (not sure if I’d mentioned that!) but I was left kicking myself a bit, I think second was very achievable as I spent the best part of an hour trying to catch a bonus but fishing is always full of ifs, buts and maybes! I do have a real love/hate relationship with the pond but it was quite interesting today that I caught well when I went longer and a more suitable rig would have put more fish in the net, food for thought for next time perhaps!

On the subject of next time, without a match secretary and Jake unable to fish the next match and Leighton fishing a Stoke match, how can this league continue? Well John Dursley from Enterprise Angling has said he’ll sponsor the league which is a fantastic gesture and by hook or by crook we’ll make sure this league happens, Fieldy has said he’ll help me run the next one and I’m sure we’ll be able to make it work between us which just goes to show what a great bunch of lads we have fishing.

The trouble is, this is just wallpapering over the cracks and without a match secretary, I can’t see the winter league or matches past the summer league happening. I will make sure Bob’s match takes place because I ran the first one and it means a lot to me and his family. I’m really hoping something is sorted out because if it isn’t I fear for the future and there could be some dark times ahead. We had a full, interesting match calendar with some brilliant interclub fixtures to look forward to, on a personal level, I’ll be gutted if those don’t happen but ultimately I’ll still be able to fish somewhere every Sunday.

If anyone would like to get involved please get in touch, I would help as much as can but I can’t and don’t want to commit to anymore than that. I don’t think I’m being melodramatic but I honestly believe without matches, it will signal the beginning of the end for the club and that would be a crying shame. There are around 40 anglers (off the top of my head) who buy a licence just to fish matches and then in the club book there are something like 25 matches and if you have an average of 15 anglers fishing (although we’re getting more anglers than that at the moment), that’s £30 in peg fees per match so £750 per year that either goes to the club or charity plus £1200 from licences not being bought and it’s a big hit! Less money for restocking or rent on waters which in turn means less pleasure anglers buying licences and you can see how it’s a vicious cycle – I hope I’m wrong and there’s something in the pipeline.

On a lighter note I’m fishing the Angling Trust Pairs Qualifier on the Taunton and Bridgy canal next week, something a bit different and I haven’t fished the canal for longer than I care to remember, my partner is Russ Hilton who’s just won his third match on the trot on the canal so I apologise in advance if I let you down!

Next up – Taunton and Bridgwater Canal