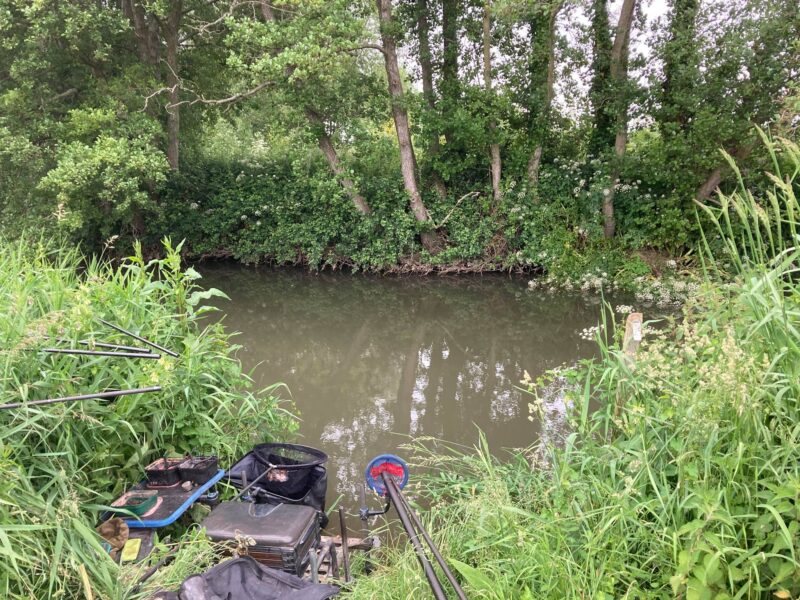 I really enjoyed fishing the Stoke matches on the Parrett last year and their first match of the new season is always the Evening Cup, something a bit different for me because it’s on a Saturday and as the name suggests, it’s in the evening! There were 21 booked in which is just fantastic and with it being a 14:30 draw time, The Breakfast Club plus a few others decided to go to the Bowling Club for lunch (well done Terry The Toast for arranging). Along with the usual suspects we were joined by David and Russell Hilton (who was fishing the river for the first time). As always, we were well looked after by Drew and his team before heading to Parrett Works for the draw.

We were there early so popped into The Ranch for coffee which Rob very kindly bought (cheers mate), I also went for a rather a scrummy chocolate brownie which I managed to drop on the floor outside, much to Nick’s amusement. After brushing it off, I can report it was very nice and the gravel added nicely to the texture! A few anglers had pulled out meaning we were down to 16 but still a decent turnout. After paying our pools, it was time for the draw which was conducted by Dave P and his glamorous assistant Chris N, when it was my turn, they pulled out peg 29 which was the same swim I had in my very first Stoke match on the river.

We could drive down and park in a field near the river so no mega long walks and all the swims had been strimmed and looked lovely. Despite having over an hour to set up, I ended up rushing about as all my rigs were either too long or not deep enough, I eventually settled on a 1 gram bodied float for down the middle at 8.5 metres and a 0.6 gram DH16 for fishing across to the far bank cover. Maggots, casters and hemp were on the side tray plus I had some Bait-Tech Pro Nat Dark which I’d mixed up earlier. 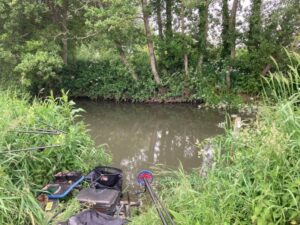 On the whistle, I cupped in a ball of groundbait down the middle and to my horror it floated, as it headed off downstream, I was frantically bashing it with my pole cup but it eventually sunk, nowhere near where I wanted it to! I squeezed the next two balls a bit harder (oh I say!) and they both went in okay. Starting with single red maggot on the hook, I missed a bite first put in then on the next chuck the float slid away and the strike saw a pleasing amount of number 5 Dura Slip exit the pole tip before I netted a nice 4oz roach.

A chunky little rudd was next before I had a minnow so I tried double maggot for a couple of gudgeon and another minnow which was the signal to switch to caster. I was getting regular bites and added another rudd, a dace plus some more gobies and after an hour I had 15 fish (not counting minnows) for a pound or so and as I was expecting 5lb to be a good weight, I’d gotten off to a good start.

Bites started to slow up going into the second hour and it started to rain but not too heavily for the time being, I was feeding hemp and caster down the middle but also across although I intended to leave that for as long as possible before trying it. I added another section and went further down the peg in the middle where I added some more gudgeon and another nice roach but bites were definitely tailing off. The light rain, which up until now had been a mild annoyance, turned into absolutely chucking it down and with the sky getting darker by the minute, it looked like we were getting it all night.

With two hours gone I ventured across to run the lighter rig through just off the far bank cover and had a nice dace and another rudd but it was short lived. I added another section to go tight over and was expecting another flurry of action but it’s not really happened, a couple of missed bites were followed by a small roach, I did hook a slightly better fish which came off and things weren’t going to plan.

Then the float buried and a fair bit of elastic came out, I shipped back quickly and it felt like a good fish, hopefully the bonus chub I needed. I got down to the top kit and the fish was trying to get under the vegetation on the near side, a classic chub tactic, so I had to use the pulla kit to get it under control and then a poxy trout about a pound came to the top! So after a really good start, we were now three hours in and I was struggling, things didn’t get any better when I hooked a slightly better fish only for the rig to get tangled around a bramble. After much yanking and swearing, I got the rig back minus the fish.

Back to running the heavier rig down the middle I was getting the odd gobie and minnow but not really putting any weight in the net. Then with 45 minutes left and the light fading fast, the float tip sunk from view and I carefully shipped back and netted a 4oz roach. It’s twin followed next chuck and then I had my best fish so far, a roach of 8oz and for the remainder of the match I’ve had regular bites adding another four decent roach and a gudgeon.

The whistle went and I’d finished up with 41 fish (roach, rudd, dace and gudgeon) plus a few minnows which I hoped would go 3lb possibly a bit more and I’d probably had 2lb of that in the last hour. I quickly packed up and went to give Steve P a hand with the scales, he was on peg 23 and weighed 2lb 2oz, Nick P next door had 1lb 2oz and Paul A weighed 1lb. The Grand Wizard had 1lb 3oz and then Derek G weighed 2lb 2oz, my fish went 3lb 11oz and then Chris N had 1lb 3oz before Dave H on the end peg had some nice fish for 3lb 7oz. I did take several photos but I don’t know whether the camera lens was wet or something but only two rather blurry photos were usable! 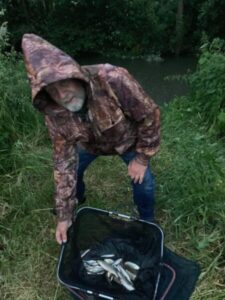 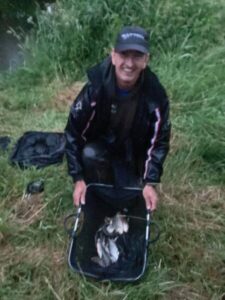 I had 3lb 11oz which was second on the night

As I took my kit back to the car, I saw Russ who said he’d struggled in the other section and that he thought Terry was top there with 3lb something but wasn’t sure of the ounces. All the soggy anglers gathered under the cover of a Terrys raised tailgate for the results, he had the top weight with 3lb 15oz, I was second and Dave H took third spot. I picked up £30 plus a nugget off Steve although I gave it straight to Terry, I was also due £2 from Nick as we went double or quits but he managed to escape without paying again! 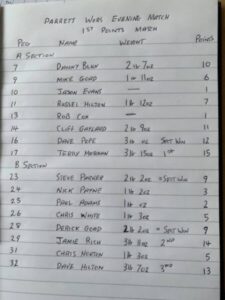 So another really close match with only 8oz separating the top three, I have to say I absolutely love fishing the Stoke stretches of the Parrett, the weights are relatively low but to me it feels like you’re always in with a shout, catching those quality roach seems to be the key to doing well although there are also good numbers of chub and just one of those would make a huge difference.

By the time I got home, unloaded my kit and tried to sort some of it out to dry before the following days match, it was gone 11:30 and I went straight to bed!

Next up – Covey Fishery