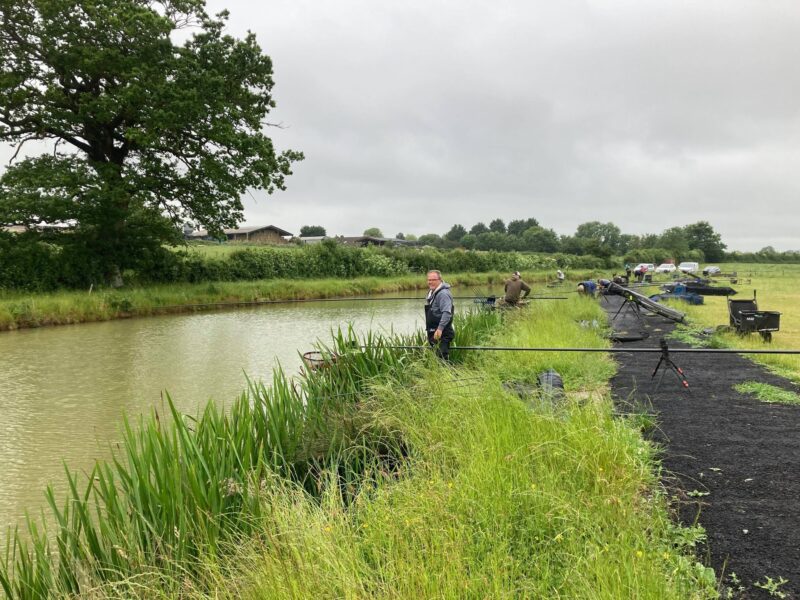 I was booked in for the Dillington match today but after losing some fish, the club imposed a keepnet ban which obviously meant the fixture would have to be re-arranged, so I was left searching around for a match to fish. I’d booked Monday off work as I knew I’d be knackered after fishing both days so was desperate to fish somewhere or else I’d be bored round the house. Also with it being Father’s Day, it’s still a bit raw for me and the ideal tonic would be a nice breakfast and a days fishing with the lads so I decided to run a match at the lovely Covey Fisheries.

So I put a post on Facebook and the inevitable roundabout of fun and japes began, to start I was worried it wouldn’t fill up and people I thought would fish, couldn’t, and then some people I hadn’t thought of booked in. It did fill up but then there was a spate of the Hokey Cokey’s, with people in, people out, shake it all about and it all came back to me why I don’t run matches anymore! At one stage I had all 17 spaces filled with a reserve list then somebody dropped out late and none of the reserve names could make it at short notice.

Anyway, I was up early after 4.5 hours sleep and loaded my soggy gear back into the car and headed over to the bowling club for breakfast. There were some other rather bleary eyes there but fair play, everybody from last night turned up, including the Grand Wizard who I treated to breakfast as he brought on the scales, peg numbers and weigh sheets etc – top man! Mr Chant phoned as we were eating to ask if there was still a space as Mark Leahy was looking for a match and we were back to being full again – phew!

We then headed to the fishery and after everyone had paid their pools, I asked the Grand Wizard if he’d draw for everyone, I was first on the list and he pulled out peg 8 for me, a decent area as on the few occasions I’d fished the lake, the area from the tree down are normally the better pegs. Peg 1 is the flier that everybody wanted and with only four people left, Jeff Sparkes was the lucky angler to get it. Jeff, like me, prefers fishing for silvers but I said I wouldn’t have a nugget on it today as I was fishing for carp!

For company, I had Allan Oram on my left with Toastie on the other side on peg 9 so we’d have a laugh today. My peg was pretty wide, probably around 16 metres and with an awkward side wind, I just couldn’t see me fishing across so despite earlier saying I would be fishing for carp, I decided to fish for silvers! I set up a Drennan 0.4 gram Carp 1 for the top two plus two and 10 metre lines and a Guru 0.45g F1 Carbon Slim with strung Stotz to fish through the water on both lines. Bait for today was two pints of reds, some dead maggots, casters and Bait-Tech Carp and Coarse 2mm pellets. 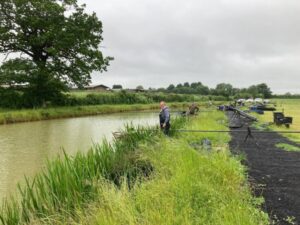 Looking up the pond from peg 8, The Toast was on 9 and Jamie Parkhouse was next to him on 10

We kicked off at 10:00 and I cupped in some micros and maggots on both lines before starting at 10 metres with double maggot on the hook. Allan was fishing a little method or hybrid across and was into fish straight away, the Toast was also off the mark quickly on the paste. It took me a little while to get a bite which of course I missed, then I had my first fish which was a little 2oz skimmer. I was feeding casters on the short line and there was the odd swirl so I picked up the other rig and flicked it out fishing top two to hand and had several chunky rudd before they disappeared. Next I tried top two plus one and started catching some small F1’s between 2oz and 8oz and apparently it had been stocked since I fished it last.

Allan and Toastie were bagging and everywhere you looked there was elastic out or rods bent over. I hooked a fish which was giving me the run-around and I jokingly said it was a barbel and when it came up, it actually was and a nice one of around a pound. In between the F1’s I was getting the odd roach and skimmer but things would need to improve drastically if I was going to do a decent weight of silvers. Bites started to slow so I went to top two plus two and carried on catching F1’s with some bigger ones up to 2lb and also had my first carp.

It’s very difficult to gauge who’s doing well when people are catching loads of fish and there’s such a big difference in the sizes, you could be landing a 5lb carp one minute and then a 6oz F1 next chuck but from what I could see, Allan was doing well, as was Terry and apparently Jeff was sacking down on the end. I knew my best bet was to fish for silvers but was at a bit of a loss how to catch them as I was fishing maggot and getting a bite every chuck but mainly from F1’s, although I was guessing it was the same for the other anglers fishing for silvers as well.

Terry was bagging up and in ‘Full Beast Mode’ (his words!) although he did have a fish do him under his nets which made me chuckle but I should’ve known better as a bit later I had a decent carp do the same to me! Allan was still steadily compiling a good weight although his feeder line was starting to slow up. Jamie P was getting a few swapping between pellet shallow and the feeder across and Paul Blake next to him was catching well on meat.

Steve P came down and said he was really struggling to catch silvers but Alvin on peg 13 had caught several nice barbel while fishing across for carp so was looking good to win the silvers. It was pointless me now doing anything else so would keep plodding on and hope I might get some decent silvers in amongst the F1’s.

I was feeding casters and maggots quite heavily and it was a bite a chuck, every now and again I’d get a small skimmer or a nice roach and even had a 6oz chublet but Allan, not content with bagging on carp, had to go one better by catching a 1lb chub on the feeder! Going into the last couple of hours, Terry decided to put another net in but then suffered the dreaded ‘Curse of the fourth keepnet’ as his catch rate slowed right up.

With Blaker now catching well down his edge and Allan’s short meat line starting to produce some nice carp, it was looking like being a close run thing as we headed into the home straight. For the last hour, I couldn’t get my rig in fast enough but it was still mainly F1’s although I did have a nice roach and my last fish just before the all out was a 4oz skimmer. I ended up with 36 silvers (barbel, chub, roach, rudd and skimmers), 3 carp and I have no idea how many F1’s, probably 50 or 60!

Allan had caught really well on his meat line towards the end and reckons he had 20lb during that period, Terry had slowed up after a blistering start, Blaker was bagging near the end and Jeff on peg 1 would be in the mix as well. I packed up and started the weigh in with Mr Sparkes, he had three barbel and some small fish for 5lb 12oz and said he’d lost several barbel too, after his other nets were added, his total was 69lb 4oz. Karl on peg 2 was fishing the lake for the first time and had some carp and F1’s for 8lb 13oz, Dave P next door had lots of fish for 26lb and then the Grand Wizard weighed 37lb 2oz. 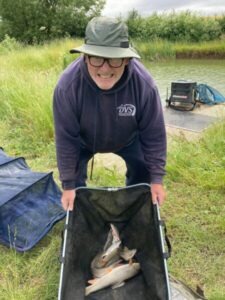 Jeff had 69lb 4oz which included 5lb 12oz of silvers 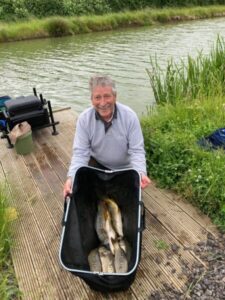 Neil P had 22lb 13oz from peg 5 and then Bill ‘The Paste’ had chucked back on 6, Allan was next and his three nets went 92lb 11oz to storm into the lead. My F1 net weighed 38lb 6oz, three carp added 6lb 4oz and my silvers went 5lb 14oz, bloody typical, the first time in years I haven’t had a pound with Jeff and I beat him! I didn’t think it would be enough though as Alvin had those barbel and apparently Mark Leahy on peg 17 had caught a dozen decent chublets. 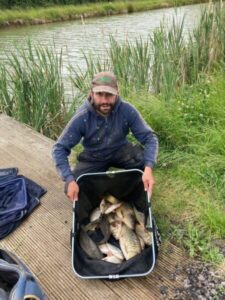 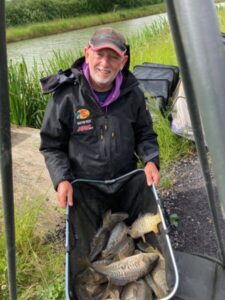 Allan went into the lead with 92lb 11oz 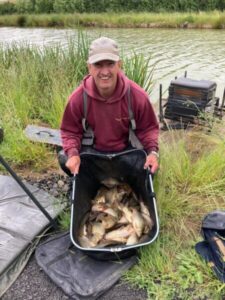 After four weighs, Terry ‘The Toast’ had a total of 62lb 8oz which put him in third place for the time being, Jamie P weighed 39lb 13oz and Blaker had 52lb 13oz from peg 11. Scott C didn’t weigh and then Alvin’s five barbel plus silvers went 8lb 9oz but he also added 72lb 5oz of carp and F1’s to give him a total of 80lb 14oz and go into second spot. Baz had 3lb 5oz of silvers and 15lb 14oz of F1’s and then Steve P weighed 13lb 4oz and conceded a nugget as his silvers went 1lb 10oz. Kirsten P had chucked back on 16 and then Mark Leahy’s mainly chub catch went 7lb 11oz to take the silvers win by default and he also had 40lb 2oz of carp and F1’s. 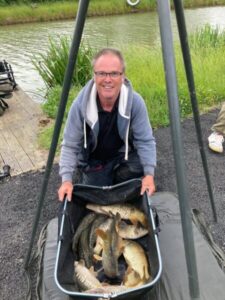 Terry ‘The Toast’ had a lovely day to weigh 62lb 8oz 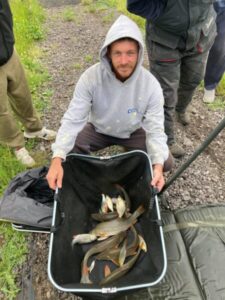 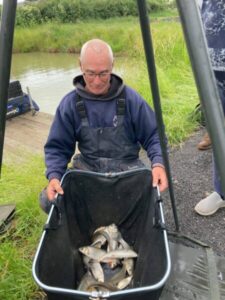 So a really good match in the end with loads of fish caught and most seemed to have enjoyed themselves. Just doing a quick calculation, the total weight of the 14 anglers who weighed in was 623lb which works out at 44lb 8oz per angler, which is nice fishing with loads of bites. I picked up £25 for second in the silvers which helped pay for the day and I had some lovely feedback from a few of the anglers saying it was a well run match and when am I doing another (hopefully not for a while!).

Although I’m absolutely pooped, I’ve had a lovely couple of days fishing (and two envelopes which is always nice) and along with the brilliant banter from a great bunch of lads, I think it’s the diverse nature of the matches I fish that keeps it so fresh, 3lb 11oz of roach on a little river one day, 50lb of F1’s the following day, love it!

I can’t go without saying a massive thanks to Tam at Covey for accommodating us at fairly short notice, The Grand Wizard for helping out with the scales etc, Drew at the bowling club (it will be a sad day when he leaves!) and of course all the anglers for their support today – cheers lads.