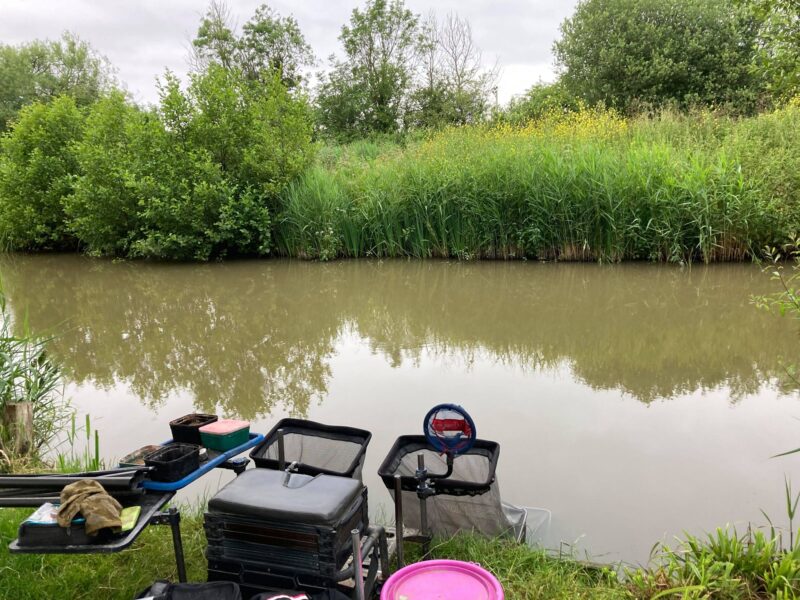 For the latest Stoke match it was at The Sedges on the canal lake, the usual suspects assembled for another fantastic breakfast at the bowling club (Andy B was due to join us but decided to have a lie in!) before we headed off in convoy behind ‘Breaker, breaker, rubber duck Morgan’ who took us on a very scenic route to the venue! After collecting some nets, it was time for Mr Pope to draw our pegs and everyone was hoping for the end by the car park which is the deeper part of the lake. When it was my turn he pulled out number 58, on the far side, about halfway up, it looked quite nice but fairly narrow at only 10 metres to the far bank.

Andy S was on end peg 64 and with Steve P next door, that was two of my nuggets in serious jeopardy already! While I was setting up there were quite a few fish topping, silvers and the odd carp along with loads of bubbles coming up and I was really looking forward to it. My plan was to fish for silvers and hopefully pick up some carp along the way. I set up 0.25 gram Guru Carbon Pinger for fishing three lines, top two plus two straight out, 8.5 metres to the right and 10 metres to the left plus a Crystal Margin for fishing across to the far bank. Today’s side tray contained dead reds, some rather bright pink disco maggots, micros, expanders and Bait-Tech Special G Green groundbait. 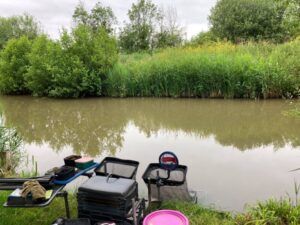 On the whistle I cupped in groundbait on the short and right hand lines and then some micros at 10 metres and across. Starting short with double disco maggot, I had a little 2oz skimmer quite quickly and was getting the odd small fish but not the quality I’d hoped for. Double dead red maggot resulted in a skimbob and then I hooked a fish which pulled out a bit of elastic and a gorgeous little crucian popped up. After that I was having to wait ages for a bite and bumped off a couple of small fish so tried an expander but only had a small skimmer and with an hour gone, I was going nowhere fast.

I fed the short line again and went on the 8.5 metre line for the first time but after ten minutes I hadn’t had an indication so next up was the 10 metre line to the left with expander on the hook. A positive bite after five minutes resulted in loads of laccy coming out and I could see it was a decent carp of 3-4lb, it was pretty much under control but I just couldn’t get it’s head up and I suspected it might be foulhooked but I’ll never know as the poxy hook pulled out!

Next chuck I had one about 1.5lb and thought I might now be in for a nice steady day but then of course the float just sat there. Another go on the short line and couldn’t get a bite there either, Josh Tucker was the next peg on my right and came down with his landing net to show me a big eel he’d just caught and said he hadn’t had a carp yet so it was hard going for him as well.

I didn’t want to go across just yet so another look on my other lines didn’t yield anything and when Josh shouted down to show me a lovely golden tench he’d just caught, it felt pointless going for silvers so went across with treble dead reds on the hook and toss potted in some micros. It wasn’t really happening there either with just the odd knock from small fish, I was just thinking about trying another line when the float shot under and before I had time to strike, the pole tip was dragged round! I safely landed a nice 3lb carp and then next chuck hooked another which didn’t pose me too many problems until I’d got down to the top kit. The line was zig zagging which made me think it was hooked in the tail but then a big eel’s head broke the surface! I landed it safely and it was nicely lip hooked too.

The next bite resulted in another decent fish on, I quickly shipped back but the hook pulled out and then I couldn’t buy a bite again. All my other lines were now dead as a dodo so being at a bit of a loss, I set up a little rig to fish banded pellet across and just rattled in a few 6mm’s every chuck, a carp quite quickly proved to be a false dawn and I was left scratching my head again.

Back on the short line, I began feeding maggots quite heavily and the first few bites resulted in small roach falling off but then hooked a fish that had me convinced it was going to be a tench but turned out to be another ‘Ian Beale’ of around a pound. No more bites there so I spent the last period of the match across with pellet and just before the all out, the float went and elastic got ripped out of the pole tip, I played it carefully and landed a 2lb carp and that was that.

I packed up and as I took some of my kit back to the car, I was expecting the others to say it had been hard for them as well but they all reported they’d caught 7 or 8 carp and Andy S on the end had 14 or 15! The scales soon arrived to weigh in and Shane R was the first peg on our bank, he had 3lb 7oz, Josh had 8lb 3oz of silvers and then my four small carp weighed 9lb 3oz and my two eels plus bits added 3lb 2oz to give me a total of 12lb 5oz. 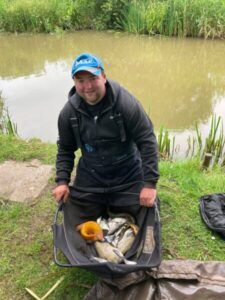 Josh had 8lb 3oz of silvers which included some nice skimmers, a big eel and a lovely golden tench 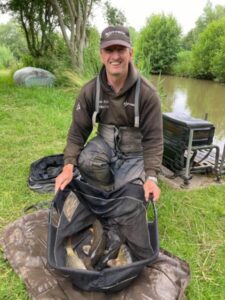 I had four carp, two eels, a crucian plus some bits for 12lb 5oz

Rob Cox on peg 60 had 16lb, Lee T weighed 23lb 5oz next door on 61, Parker ‘The Pole’ briefly just pipped him with 24lb 8oz on 63 and then Andy S on 64 blitzed the match with 54lb 15oz which also included some nice skimmers and a barbel for the top silvers weight of 8lb 8oz, well done mate. 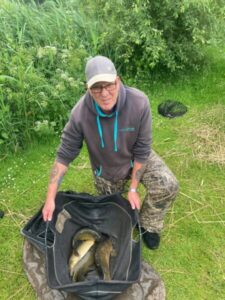 Rob won our section with 16lb of mainly carp 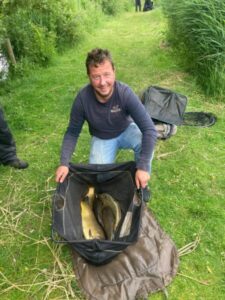 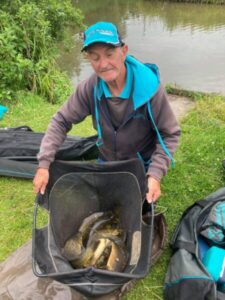 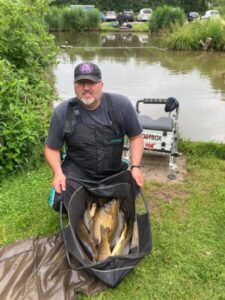 It was a similar story on the other side where everybody had struggled until the scales reached the two pegs at the end where Dave P had 16lb 8oz on peg 41 and Paul Blake won the section from 42 with 21lb 7oz.

So a disappointing day for me and I also had to hand over nuggets to Andy, Steve and Rob although the one saving grace was collecting one from The Toast who weighed 3lb 12oz from peg 46. Thankfully we’d been lucky with the weather as it absolutely lashed it down as I was driving home!