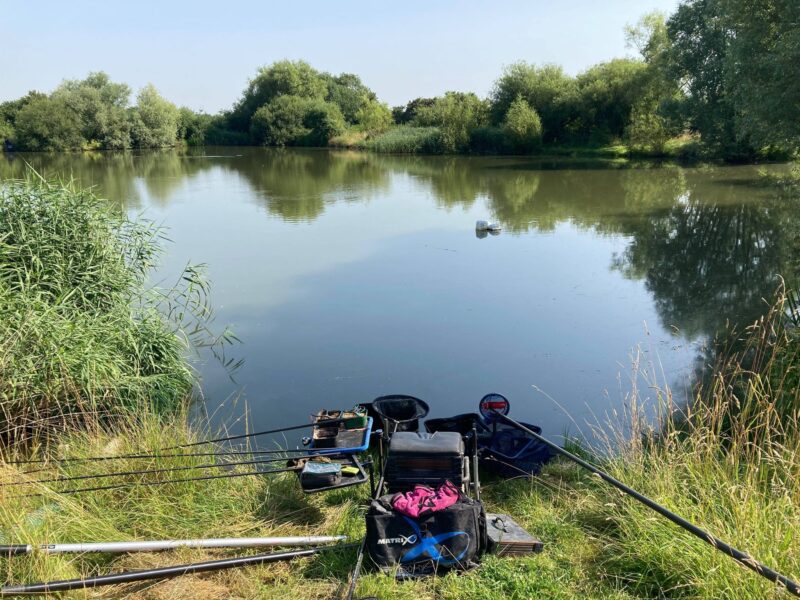 With a week booked off work, I always like to try a fish a mid-weeker but where to go? I did ask The Grand Wizard if he fancied a charity match at Hebditch’s and he said he did but the trouble was it was rather overgrown and needed some work doing and being quite short notice, it probably wouldn’t be a goer. He got back to me later and said it wasn’t dead in the water yet and he was trying to arrange a work party for Monday, I said I could help as I was on leave and he replied David Simms would be in touch re: times etc.

I met David out the pond on Monday morning and he’d brought all the kit so each armed with a strimmer we cleared the path from peg 11 round to number 7 which took over two hours in intense heat. At this point, people who know me will think the blog has been hacked and somebody else is writing this because manual labour and me don’t mix which is why I avoid it like the plague. When we’d finished, I was a sweaty mess and realised why I sit behind a desk for work! Massive thanks to David for giving up his time, especially as he wasn’t even fishing the match. The pond looked lovely and there were carp everywhere, hopefully we’d be in for a good day.

We all met at The Airfield Tavern for an all you can eat breakfast (thanks to Terry ‘Five Bacon’ for organising) and then did the draw there. With just The Grand Wizard and me left to draw, the two pegs left in the bag were 3 and 4 (the flier) and I’d have been happy with either but Terry pulled out the famous peg for me, it’s won more matches than any other so now I had to try and do it justice.

After a short drive we arrived at the pond and it looked lush with carp everywhere, Rob was on peg 5 with Chris N on 6, The Grand Wiz was on 3, Toastie on 2, Parker on 1 and Andy L on 11. I set a Drennan Crystal Dibber for fishing shallow and also a margin rig (which wasn’t used), on the side tray I had plenty of 6mm Bait-Tech Carp and Coarse pellets plus some micros and dead reds. 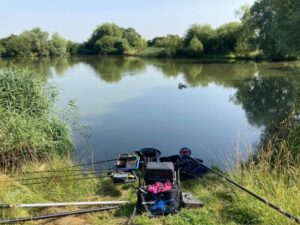 The famous peg 4, I won off it the only time I’d ever drawn it, could I repeat the feat?

On the whistle I started shallow (surprise, surprise) at 10 metres with a banded pellet and pinging in 6mm’s regularly and had a small 6oz carp within a couple of minutes. It was a bite a chuck and although I could only really see Chris N, Rob and Andy down on the end, they were all catching well and I could hear lots of splashing coming from Grand Wiz on the other side of the reeds. I had several carp between 4-12oz and then hooked a decent one around 5lb only for the hooklength to snap at the net! More small carp followed before I successfully landed a better one and after an hour I had 14 carp for probably 10lb.

The second hour was even better with a couple more decent carp plus lots of smaller ones and they are packing on the weight with quite a few now around the pound mark. They must be breeding well as I was also getting some tiny 1oz carp which I didn’t bother counting. Chris N over on peg 6 was bagging and it looked like he was getting more of the better 3-4lb fish than I was. I added another 20 carp in the second hour and although it felt like I was on for a good weight I knew I was behind Chris.

We’d decided silvers wouldn’t count today and I’d thrown back quite a few small rudd but also had some clonking roach on 6mm pellet! Sport showed no sign of slowing although I was only getting the odd better one. There’s a rope that goes across the pond on the left of the peg (something to do with the irrigation pump) and on the other side of it by the reeds, there were loads of fish moving but I couldn’t get to them!

I tried fishing a section further out and had a decent carp first chuck but then it was back to catching the smaller ones, it was now boiling hot and I was glad I’d brought loads of cold drink and a cool bag. I did manage to mug one nice carp as it came under the rope but didn’t see many cruisers within range during the day. It was still a bite a chuck but mainly from pasties, annoyingly I hooked a better one and had it under control when it managed to snag me solid in open water and I had to pull for a break.

With two hours to go, I had around a dozen decent carp in one net and fifty pasties in the other so started my third net. I carried on catching well, mainly smaller carp with a couple of better ones and had another four pounder come off at the net. Chris N came round with sixty minutes to go asking if anyone had a spare net and managed to get one off the Grand Wizard. I was hoping to reach 100 carp and on the whistle my clicker was reading 101 and I’d also had a load of tiny carp that I hadn’t counted. I had no clue what weight I had with fish ranging from 1oz to 5lb although I did know I was a long way behind Chris N.

We started the weigh in with peg 6 and after four weighs, Chris’s total was 124lb 14oz, a fantastic weight on the day and from an unfancied peg, Rob was next and had loads of pasties for 70lb 7oz. Then it was my turn and my three nets totalled 95lb 8oz and I still haven’t done 100lb at Hebditch’s, The Grand Wizard had also done brilliantly to weigh 104lb 10oz and with Toastie saying he thought he might have 100lb, it was looking like I wouldn’t get in the frame off the best peg on the lake! 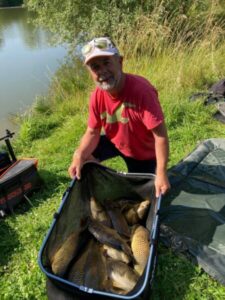 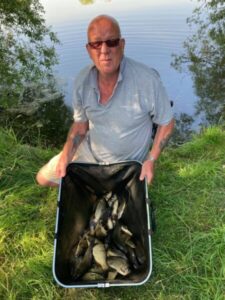 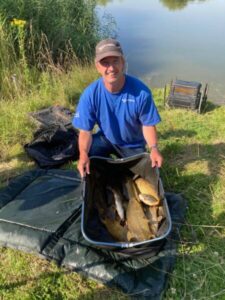 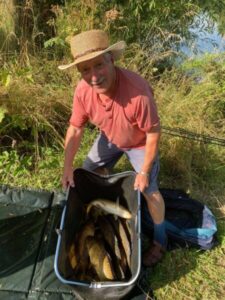 We got to Terry and he had four nets in, with the first three weighed he had 69lb 13oz and when he pulled his last net out, it was going to be close, it was called at 21lb 11oz to give him a total of 91lb 8oz which was a great weight from that peg. Steve ‘The Pole’ had some lumps and weighed 70lb 12oz before Andy on peg 11 had lots of fish for 47lb. 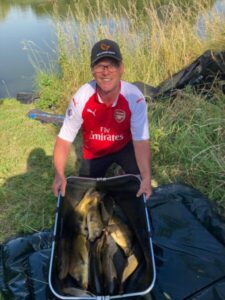 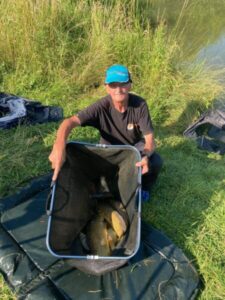 Steve ‘The Pole’ had 70lb 12oz which included some lumps 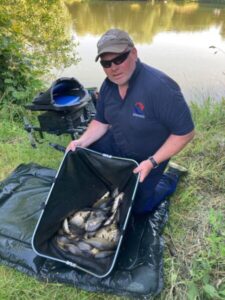 So I picked up £30 for third plus nuggets off Steve, Rob and Andy and although I’ve had a lovely days fishing, third is a terrible result from that peg. Several things threw me today, I didn’t expect to catch so many small carp, I knew I was catching well and normally 90-100lb would be enough to win and I’ve never known the pond to fish that well. Seven anglers recorded a total weight of 604lb 11oz, an average of 86lb per man!

What could I have done differently, I think if I’d used banded 8mm pellets and fed 6mm’s I might have caught a better stamp, I did feed some micros on the inside but didn’t try it as I only had dead reds as hookbait which I thought was pointless with all the little carp. Chris N caught very shallow tight to the bank and said he could see when the bigger fish arrived and could hear them slurping against the grass, I didn’t see any fish in the margins.

It’ll be interesting to see if it fishes as well next time or was it because there were less anglers around the pond. I was gutted to come so close to catching my first 100lb weight at Hebditch’s although I did beat my previous best weight (just!), which stood at 94lb 9oz for years. It was still a lovely day for all the right reasons, a top breakfast, a fantastic days fishing with loads of bites and all in the company of a great bunch of lads for a very worthy cause, we raised another £70 for the charity and the total now stands at £1078 for the year which is just awesome – well done everyone!