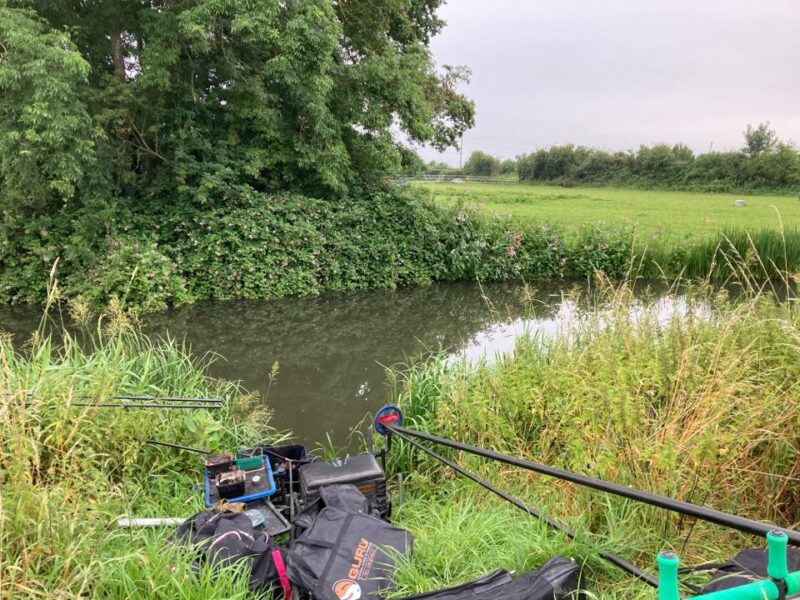 I’ve absolutely loved fishing the Stoke river matches at Parrett Works and Kingsbury, it’s not easy fishing by any means but it’s fascinating trying to work out how to catch the 4-5lb needed to do well. After some decent results, I really thought I was starting to get my head round it but I should have known better and in the last match, Kingsbury kicked me squarely in the nuts!

I thought the draw time would be the same as the previous match and Drew at the bowling club very kindly agreed to open at 6:30 for us but then we found out the draw would now be even earlier from 6:30 to 7:00 so that was that, nowhere would be open for a decent fry up at six in the morning. After getting up at 5:15, we met at the Shell garage in Ilminster at 6:30 for a less than inspiring bacon bap before heading to Kingsbury.

You can drive to your pegs and park right behind them which is just fantastic, my swim looked lovely (but they all do) and there was the odd fish topping. Clifford was above me where I was last time and then David Simms was the next peg down but there was a decent gap between us. 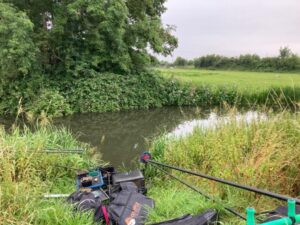 I set up the same two rigs, a 1 gram bodied rig for down the middle and a 0.6 gram DH16 for fishing across, the usual maggots, casters and hemp were on the side tray although I’d decided to not put any groundbait in this time. After quite a bit of rain yesterday, the river had a nice pace to it, a tinge of colour and combined with it being overcast and cooler, conditions were ideal so hopefully it would fish well.

On the whistle I cupped in some hemp at about 7 metres before shipping out with single red maggot on the hook and started catching gudgeon straight away. It was a bite a chuck from mainly gonks along with the odd tiny chublet but I was slightly concerned at the lack of roach. Cliff above me landed a nice one but it was 45 minutes before I had my first chunky roach of 3oz. After the first sixty minutes I had 28 fish (in the last match I had 29 in five hours!) so felt I was doing okay at this early stage. Things got even better early in the second hour when I had another nice roach, this one about 6oz and enjoyed a nice spell catching on caster.

I was still getting regular bites from gobies, the odd small roach and also had a little rudd and with two hours gone I was up to 53 fish and really enjoying myself. Bites started to tail off in the third hour but I was still putting a few fish in the net, I’d been feeding hemp and caster across as well and would try it shortly. I got to around 60 fish (mainly gudgeon) for probably 2lb or so but bites down the middle were now very few and far between.

Picking up the lighter rig I ran it down the middle but no bites so I went across to 11.5 metres and the float was going through lovely but no indications at all, back down the middle with the heavier rig and had a couple of gudgeon but after such a good start I was now struggling. There was a bit of a small bush opposite so I added a section and ran the heavier rig through just off it and started feeding some maggots as well as casters and hemp.

I was getting bites again on double maggot and had a really good spell catching gobies and had my second net roach, this one was a clonker of around 8oz. It was back to a bite a chuck and I even caught a couple of tiny ruffe! The next bite resulted in what felt like a slightly better fish and as I shipped back it came straight at me and tried going under my keepnet, I managed to stop it and a nice bonus chublet of 8oz or so popped up.

Sport slowed again going into the last twenty minutes and I finished up with 95 fish (roach, rudd, gudgeon, chublets and ruffe) plus a few minnows. I’d been given the board so walked down with Cliff to do the weigh in, starting with Mike Goad on end peg 20 who had 3lb 3oz, then Danny Mattock next door had exactly the same weight before we got to The Toast on peg 18 who was admitting to 6lb. He pulled his net out and had a lovely net of quality roach, rudd, dace and chublets which went 7lb 5oz. 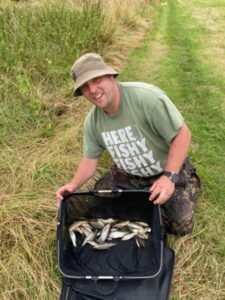 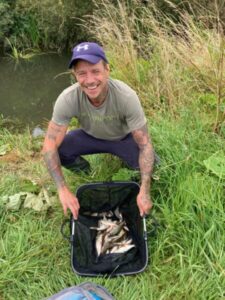 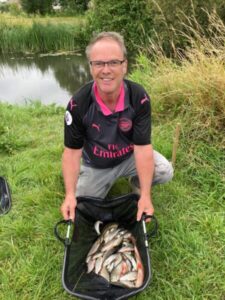 Then Dave Hilton weighed 3lb 15oz on peg 17, Dave Pope on 16 weighed an ounce more to go into second spot and Dave Simms had 3lb 7oz, so very close weights from a trio of Dave’s! My fish went 4lb 13oz and then Cliff had 3lb 5oz. 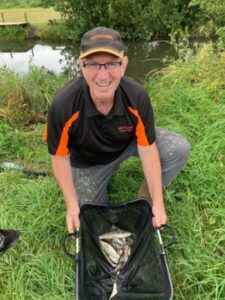 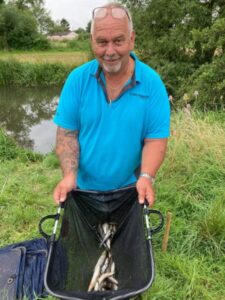 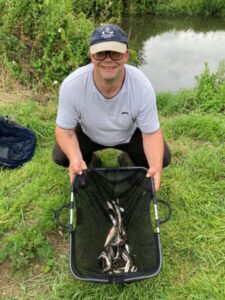 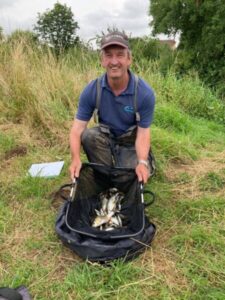 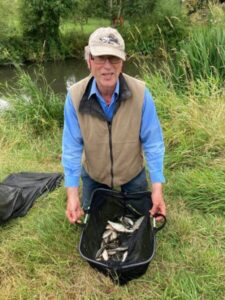 Back at the results and Russ Hilton had the top weight in the other section with 5lb 6oz from peg 6 and the next best weight was Rob Cox with 3lb 10oz followed closely by Chris N with 3lb 9oz. Thanks to Russell Hilton for the photos* 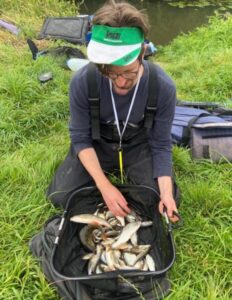 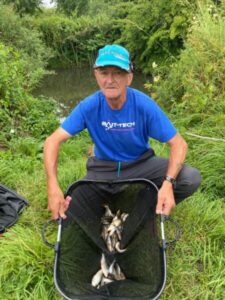 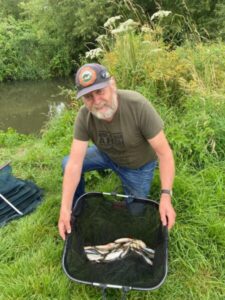 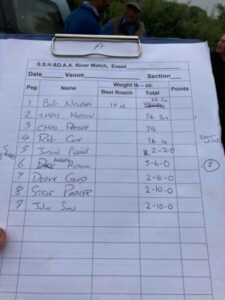 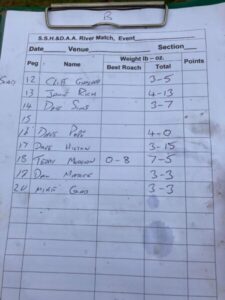 So I ended up third and picked up £25 plus a nugget off Steve which I gave straight to Terry, a really enjoyable match (just needed breakfast to make it even better!). Apart from The Toast’s weight, it had been really close with just ounces separating several places and that’s what makes it such interesting fishing, you don’t feel like it’s over at the draw bag, of course there’s no such thing as a truly fair stretch of river but it doesn’t seem like the same pegs are winning every time.