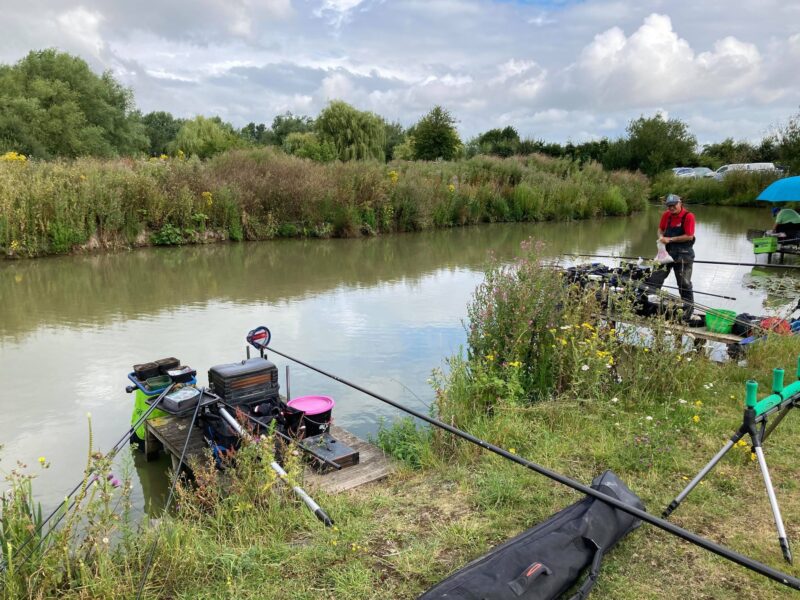 I don’t fish many Saturday matches but when I saw it was Clive’s memorial match and silvers only on Sellicks, I thought I’d give it a go as I haven’t been to Summerhayes for a while. Rob also said he fancied it so I booked us in for breakfast at the Brewer’s Fayre in Taunton and it was very good once again.

We headed to Bridgwater and there was a good turnout with sixteen anglers booked in. After paying our pools (there was also an optional fiver for the biggest carp weight but only a few went in it), Pete began the draw and pulled out peg 6 for me. It wouldn’t have been my first choice as I like the pegs on the far side (17-21) but I wasn’t unhappy with my peg. 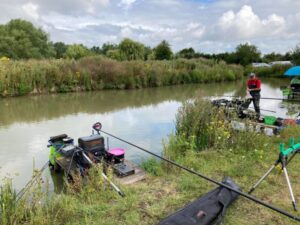 Peg 6 with Mark Leahy next door

Mark Leahy was next door on 5, with Jeff on peg 4, Rob Birch on 2 and then Bill ‘The Paste King’ was on my left on peg 8. I set up a 0.4 gram Malman Pencil to fish top two plus two and 10 metres and then a 0.3 gram NG Mini Gimp to fish the top two straight out and to the left. On the side tray, I had 4mm Bait-Tech Xpands, dead reds, micros and Special G Dark groundbait.

On the whistle I fed gb on the two short lines plus at 10 metres straight out and then micros on the long line but angled to the left. I started short but no bites after quarter of an hour saw me go out on the longer line but that wasn’t much better and the first indication saw me briefly hook a carp. Mark had already landed a couple of carp, Rob had a nice skimmer but Jeff hadn’t caught yet and it was already looking like it might be really hard.

In fact after two and a half hours and trying all my lines, my silvers net was still empty and I’d hooked around ten carp with several of them foul hooked. Then finally fishing the top two plus two line with double dead reds on the hook, a bite resulted in a small roach to avoid the blank – woo-hoo! Rob had by now landed several skimmers along with a nice golden tench and Jeff was starting to get odd skimmers. Mark was still fishing for carp and anybody would think I was doing the same as every bite resulted in a pond pig tearing off and I knew I wouldn’t be doing any good today.

Bill was suffering the same as me and landed a right lump that was probably 10-12lb and from what I could see, the other anglers on our side (Jamie C on 9 and Roy H on 11) were both catching lots of vermin as well. I won’t drag this out any longer as I only managed two small skimmers (and lost one) plus I hooked 22 carp, landing about half of them, absolute carp carnage!

The scales started with Rob and he had a nice net of skimmers plus that lovely tench for 10lb 2oz, Jeff weighed 4lb 6oz and I handed over yet another nugget. Mark had two skimmers, one weighed 2lb 3oz which put him in the lead for the bonus £32 prize for the biggest bream and he also had about 80lb of carp which would easily win the carp pool so no need to weigh them. My silvers went a magnificent 11oz (which I think is my lowest ever silvers weight at Summerhayes) and I’d only weighed in to take a nugget off Rob Cox who’d chucked back a pound skimmer – whoops! 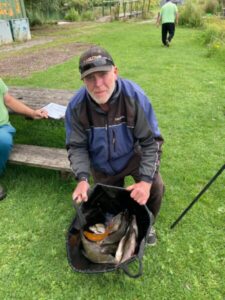 Bill didn’t weigh in, Jamie C also had 11oz, Roy weighed 4lb 3oz, Roger C on peg 12 had 4oz of silvers and 18lb of carp and then Dom Sullivan had 3lb 7oz on 13. Roger K had chucked back on 14 before Jess had done well on peg 15 to weigh 5lb 10oz and go into second spot. Young McKenzie on 17 weighed 4lb 6oz, Pete recorded a DNW on 18 and then Dave Bull had 4lb 12oz on 20 but had landed a big eel which then jumped back out of his landing net, snapping his hooklength and costing him second place in the process. 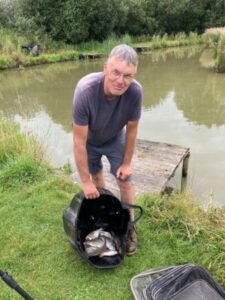 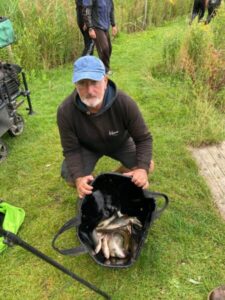 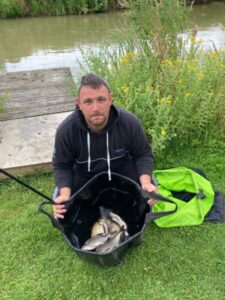 Glynn on 21 weighed 5lb 6oz and took a squid off me and Rob C had thrown back on 23 so in the side bets I finished 2-1 down. Pete fired the barbie up and did burgers for everyone which were lovely and made for a nice end to what was a frustrating day for many.