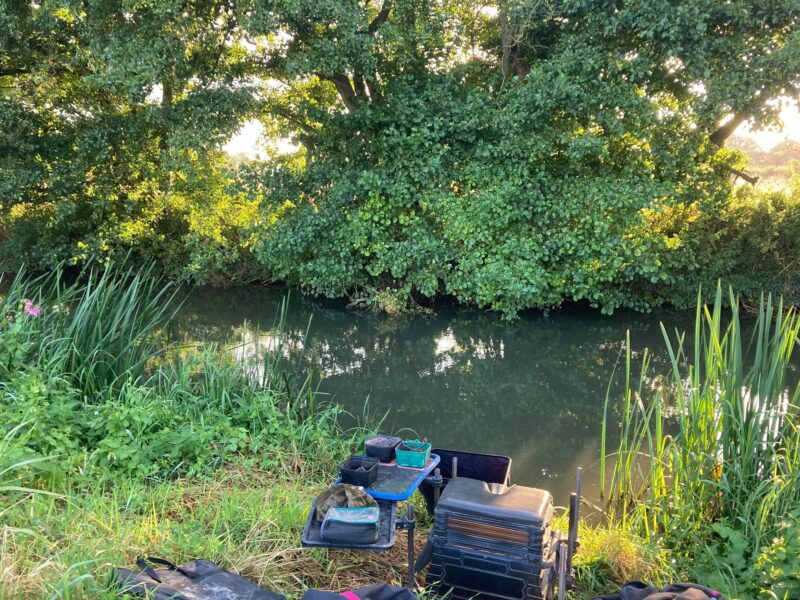 It was back to Parrett Works for this one and another early start, Nick and Jenny very kindly offered to do breakfast rolls for us in the morning which were lovely. They wouldn’t accept any payment so we all bunged another fiver into the charity pot.

With two river matches remaining it was tight in the race for the Memorial Shield where your best five results count. Dropping the worst points score, Terry ‘The Toast’ and Russell ‘The Hitman’ Hilton were both on 42 points with me just behind on 41. The trouble was, my dropper was a one pointer so I needed two more good results. If I could beat them today, it would make for a exciting finale in two weeks time.

There was a good turnout of 16 anglers and when the draw was announced, Terry went in early and pulled out peg 9, a decent peg that holds some chub, Russ drew peg 11 and looked gutted as it was where he’d struggled in the first match. Then it was my turn to let the bucket of doom decide my fate and I was hoping it would be kind. Peg 23 was my reward, not one I’d fished before and although not the best peg, it was a steady draw judging by recent results. 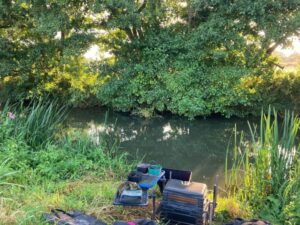 I set up a 1 gram bodied rig for down the middle and a 0.6 gram DH16 for fishing across with black hydro and a 0.14mm hooklength to a size 16 B611. The usual casters, maggots and hemp plus Bait-Tech Pro Nat Dark and Extra were on the side tray for today. Plumbing up, the swim was really deep and there was hardly any flow, I also didn’t see a single fish top while I was setting up, which was a tad worrying.

On the whistle I cupped in two balls of groundbait down the middle before starting with single red maggot on the hook and after a few minutes, I had a tiny minnow to get me up and running. Switching to double maggot, I started catching some small gudgeon and although it wasn’t fast and furious, I was getting regular indications. Caster resulted in some better sized gobies and a little chublet of half an ounce and as the first hour came to a close I had 13 fish (not including minnows) for 8oz.

There was a nice little patch of cover across and I was feeding hemp and caster above and below it but would try and leave it as long as possible before going over. Into the second hour, bites began to dwindle and even single maggot only tempted a couple more minnows. I tried going further down the peg but with a further thirty minutes gone, my keepnet had no more fish in it and it was time to try across.

With the hook buried in a caster, I added more sections and went below the cover, I really thought I’d catch quite quickly but the float just sat there and I knew I was in trouble. Ten minutes or so passed before I went above the cover and finally after what seemed like an age, the float dipped, slid along the top and went under only for me to bump it! I don’t think it was a big fish but even at this early stage, things were getting desperate.

It just wasn’t happening, I did miss another bite but we were now approaching the half way point and I still only had half a pound. Rob wandered down from peg 21 and said he was really struggling as well. I tried down the middle again, going to 13 metres to the far bank downstream, feeding maggots, back across but just couldn’t buy a bite anywhere. Knowing my river league campaign was slipping away unless something miraculous happened, I was spending more and more time across hoping for a bonus fish that was looking less and less likely with each minute that passed.

Neil P turned up to see how we were getting on and reported that everybody seemed to be struggling for a few gudgeon with the exception of Nick P on 29 who was catching some roach. As for me, I didn’t get my miracle and finished the match with just the handful of fish I caught in the first hour.

After packing up we walked down to weigh in Danny B on peg 32, he had a chublet and a couple of roach for 1lb 3oz, Bob next door on 31 weighed 1lb 12oz and then Nick had some nice roach for 2lb 9oz before Steve ‘The Pole’ went into the lead with 3lb 9oz on 28 and I paid him my nugget. Baz on 25 had 2lb 1oz of mainly gudgeon and then Dan Mattock had a decent perch and a couple of bits for 1lb 4oz. Then it was my turn and I weighed 8oz (mainly small fish) before Rob had 11oz so it had fished really hard. 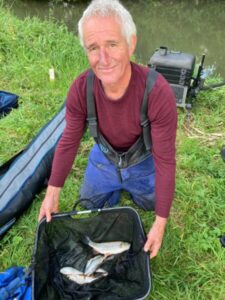 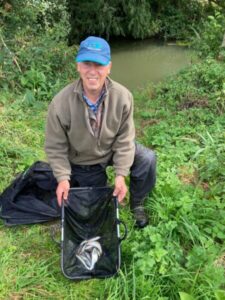 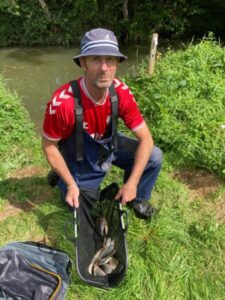 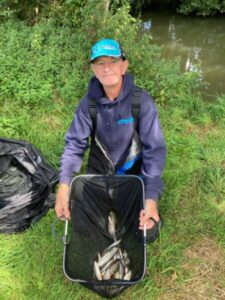 Steve ‘The Pole’ had some nice roach for 3lb 9oz 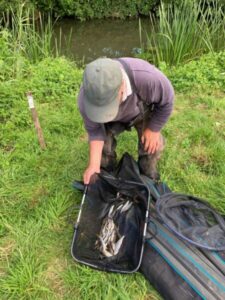 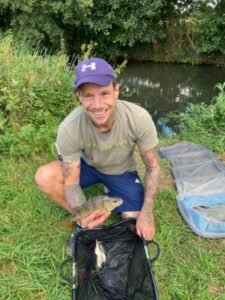 Dan had 1lb 4oz which included a nice perch

Back at the results and it had been a similar story in the other section, Dave Hilton had just pipped Steve with 3lb 10oz to win the match. He’d caught a chub and three eels although with his cockney connections I did wonder if they were of the jellied variety! Chris Norton had also done well with 3lb 1oz of dace and roach from peg 7 and ‘The Hitman’ put in a great performance to weigh 2lb 8oz from an unfancied peg. 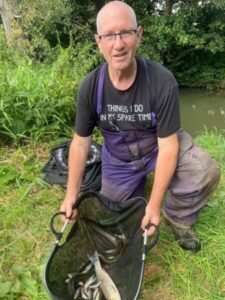 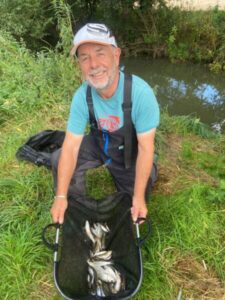 Chris N was third with 3lb 1oz of roach and dace** 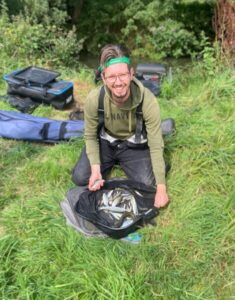 ‘The Hitman’ had 2lb 8oz which included an eel**

Dave P weighed 2lb from peg 13, Cliff had 1lb 14oz from 17 and then Terry had struggled for 1lb 3oz followed by Derek and Mike G with 15oz and 9oz respectively. Thanks to Chris Norton* and Russell Hilton** for the photos. 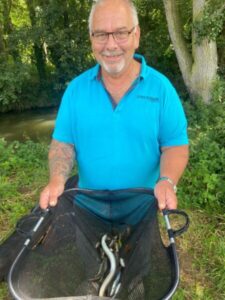 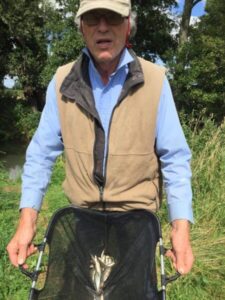 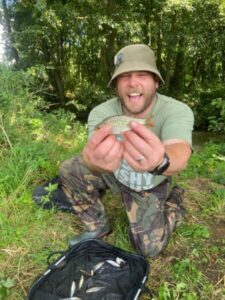 So with me blowing out in style, finishing stone cold last in the match and Terry struggling, Russ has edged ahead in the battle for the Memorial Shield and it will be between ‘The Hitman’ and ‘The Toast’ in two weeks time to see who takes the title. Who’s your money on?

Although it’s fished pretty hard, it’s still been a close match with only ounces separating the top three. Of course I’m gutted to not still be in the mix but it wasn’t to be and I’ll be doing my best again next year.

Some really good news though, Mortimer and Whitehouse: Gone Fishing returns to our screens on Sunday 29th August at 8:00pm on BBC2 and I’m really looking forward to it.