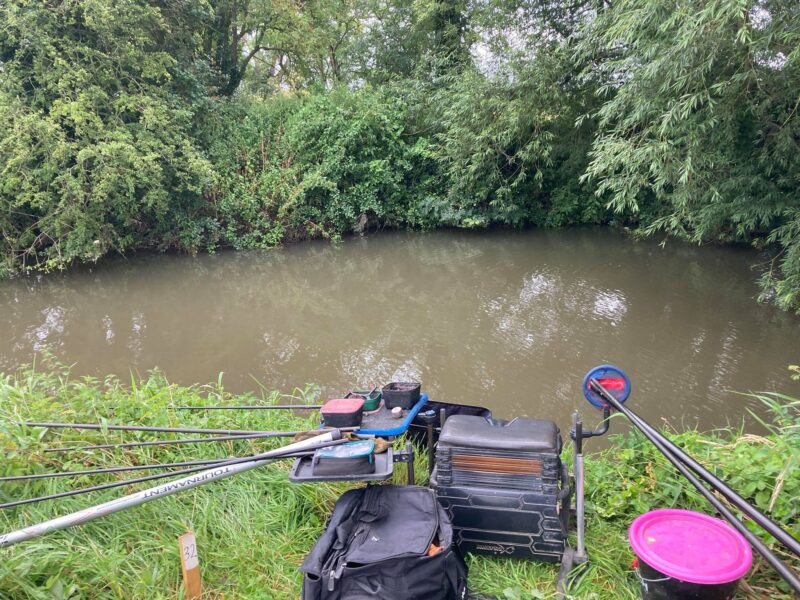 It was back at Parrett Works for this one and Kirsty at The Ranch very kindly agreed to accommodate us at 6:00 for breakfast so it was yet another rude 5:00 alarm. Once we’d eaten it was across the road and we could now draw our own pegs again. There was another great turn out of 18 anglers. I was hoping to avoid the first field and if I could choose a peg I would go for 32, the end peg above a weir.

Terry ‘The Toast’ delved into the bucket quite early and pulled out peg 4 and then Russell ‘The Hitman’ Hilton went for it and ended up on number 7 so with the pegs in the first field disappearing fast, I felt it was safe to chance it, I pulled my little wooden marker out and it had the numbers 3 and 2 on it – result. After the short drive, we all parked up and Terry unloaded his prototype Fishing All-terrain Recreational Trolley (or F.A.R.T. for short). 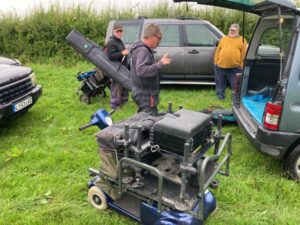 My peg looked gorgeous and The Grand Wizard was above me on peg 31, he said in my swim they sometimes catch chub across to the brambles. With that in mind I set up three rigs, a 1 gram bodied rig for down the middle inching it through, an identical rig to run it through just off bottom and a 0.6 gram DH16 for fishing across with black hydro and a 0.14mm hooklength to a size 16 B611. 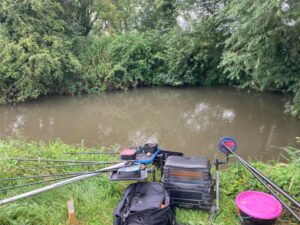 I’d been dreaming about this peg

On the whistle I cupped in two balls of groundbait (Bait-Tech Pro Nat Dark and Extra) down the middle at six metres and started with single red maggot on the hook. It took a few minutes to get a bite which resulted in a little dace and this was followed by some tiny gudgeon but these gonks were very small, unlike their beefier Kingsbury brethren. Double maggot or caster didn’t really help so I tried the running through rig and had a chunky 3oz rudd straight away followed by a roach but they proved to be a false dawn and it was back to micro gudgeon and the odd minnow.

After an hour I had 15 fish for less than a pound and bites were slowing up already. I’d been feeding hemp and caster across to the brambles but didn’t want to go over just yet. I carried on down the middle getting odd gudgeon and tried adding a section and going further down the peg but I was really struggling and it felt like I wasn’t doing my dream peg justice.

With two hours gone and very little in the net, I had to do something else so went across with the lighter rig and caster The first bite resulted in what felt like a roach or dace but it came off shipping back and then I pulled out of another, this wasn’t going well. I managed to keep the next fish on the hook and landed a nice dace, next chuck I had a roach and it felt like there were a few fish there.

Another nice dace followed and then I hooked what felt like a better fish only for it to come off. The next put in, the float sailed away and as I struck, pink hydro streamed from the pole tip and it went round some brambles before I felt it come off leaving me attached to the snag. I had to pull for a break but it came free and the rig flew back at warp speed and ended up totally spangled with the float ruined.

Picking up the heavy rig, I’ve gone back over and was still getting bites, the next two fish were dace and then I hooked another better fish, I flung the pole back and it didn’t give me too many problems before I slipped the net under a nice chub around a pound. The Grand Wizard came down to see how I was getting on and said he’d started off quite well but was now struggling.

He headed back to his peg and my next bite saw me hook another chub, I had the pole tip under the water and had shipped back as fast as I could but the fish was quicker and had snagged me under the far bank and it was solid. There was no movement at all so I got to the top kit and thought I was going to have pull for a break when I felt something give and the fish was free! I gave it some welly and netted my second chub around the same size as the first. If I’d have lost it, I would have sworn blind it was a big fish.

No more bites across so with an hour left, I decided to rest it while I went back down the middle but it was still hard going and I only added a couple more gudgeon. Going into the final thirty minutes I’ve gone back over and the float went straight under resulting in another rudd but that proved to be the last of the action. I ended up with 29 fish (plus a few minnows I hadn’t counted) which I thought might go 2lb maybe 2lb 8oz. Checking my phone I saw that Russ had tried calling earlier so I rang him back and it sounded like he’d had a similar match, a good start before it tailed off, then losing a chub on light gear before catching two. He was admitting to 2lb.

After packing up I began taking some of my kit back and met Nick and Jenny who’d already started to weigh our section, Steve ‘The Pole’ on peg 16 had caught two chub and some minnows for 2lb 12oz but had lost five, Nick didn’t weigh, Dave Hilton had 1lb 11oz which included a nice perch and then Danny B had a chub, a lovely roach plus some other fish for 3lb 1oz. Thanks to Jenny for the photos* 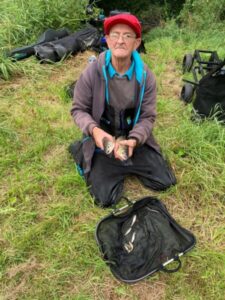 Dave H had 1lb 11oz which included a nice perch* 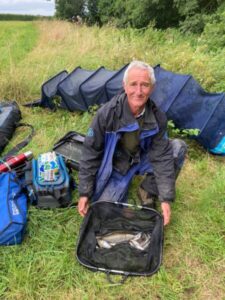 Cliff on peg 25 was next and he had a nice net of fish weighing 4lb 7oz which put him in the lead, John Simms had 1lb 11oz on peg 28 and Baz weighed 1lb 13oz from peg 29. The Grand Wizard had 1lb 9oz before it was my turn and my fish went 3lb 9oz which put me second in the section behind Cliff. We then headed back to the cars for the results and we would see how the other section had fared. 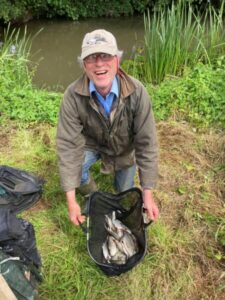 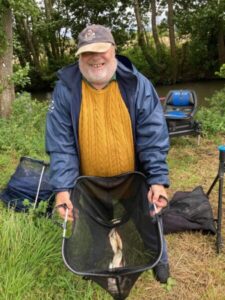 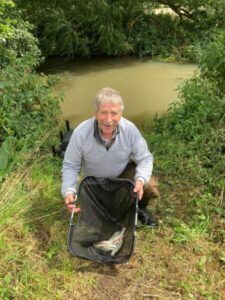 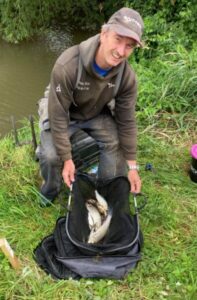 I had 3lb 9oz of chub, roach, rudd, dace and gudgeon

As the others started arriving back, it turned out Russ was even further out with his estimate than I was. He was top in that section with 3lb 8oz closely followed by Rob Cox who had a nice perch, a chub plus some bits for 3lb 7oz. Terry ‘The Toast’ had 2lb 8oz, Derek G weighed 1lb 10oz, Chris N, Dave P and Dan M all weighed 1lb 3oz, Mike G had 1lb 2oz and Bob N struggled on peg 2 for 14oz. Thanks to Russell Hilton for the photos** 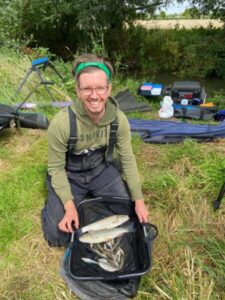 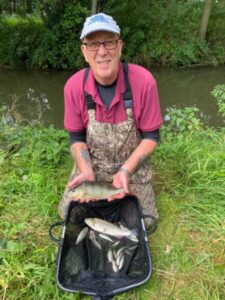 Rob had a nice perch, a chub and some small fish for 3lb 7oz** 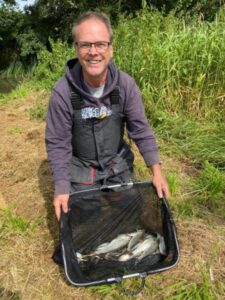 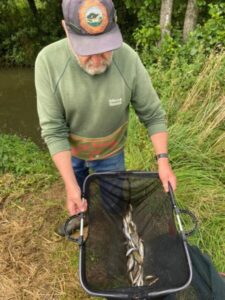 Derek had lots of gudgeon for 1lb 3oz** 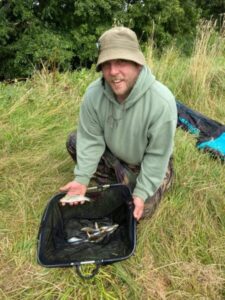 So I actually finished second in what had been a hard but very close match once again with just 8oz separating second and fifth place. Drawing a great peg on a tough day was undoubtedly a massive bonus but I was also disappointed as I’d easily lost enough to win it and I’d got it a bit wrong today. It was interesting that hardly any roach had shown and the top six weights all featured a chub or two with quite a few being lost as well, so the results could have a looked a lot different.