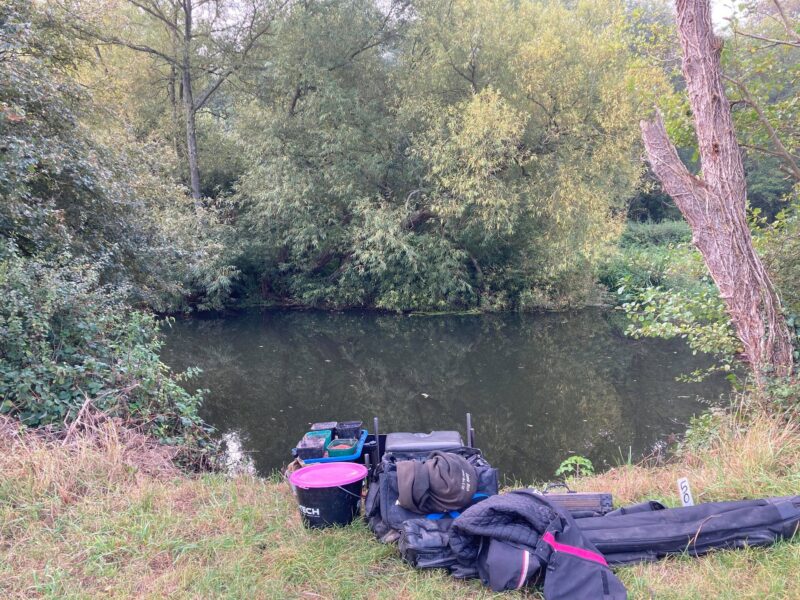 I’ve been dying to fish the Stour after seeing posts and videos Des Shipp was putting on Facebook, it looked lovely, balling in groundbait and catching roach along with skimmers and bream in some pegs and even the odd tench. Russell Hilton asked if I fancied going down to fish this open in aid of the air ambulance but then realised he was already fishing on the Sunday and couldn’t do both days. I was still keen so phoned the organiser Ian Paulley and he couldn’t have been more helpful and even said he’d sort some bait for me.

With an early start required, I went to bed early only to wake up at two ‘o’ clock in the morning and then couldn’t go back to sleep – doh! I got there in plenty of time and had a nice chat with Nicky Collins and John Barker while waiting for the pub to open for breakfast. The food was really good and reasonably priced and then it was time for the draw. There were four different sections being used, Colber, Durrent, Steart and Sowley with most people saying the latter was the preferred area.

I delved into the bucket and grabbed a little card, peg 50 at Sowley – that’ll do. All the sections were signposted from the main road and Ian had even put the postcodes of the relevant sections which I took a photo of, although I thought it would be easier to just follow someone. It was a bit chaotic in the car park but I did find somebody else who in the same section as me but he didn’t know where he was going either! 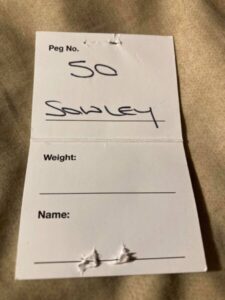 We ended up following somebody who we thought was going to our section but as we turned off the main road, the signs were saying pegs 1-19 so I knew that wasn’t right. I ended up just putting the postcode in my satnav, which I should have done in the first place as that combined with the signs made finding the right section a doddle.

All the swims looked lush and mine had plenty of cover on the far bank and there was the odd small fish topping. I set up a 1 gram bodied rig for 11.5 metres where it was around twelve feet deep and a 0.6 gram DH16 for fishing about four feet. I’d mixed up two kilos of Bait-Tech Pro Nat Dark and Extra and on the side tray I had casters, maggots, pinkies and hemp. 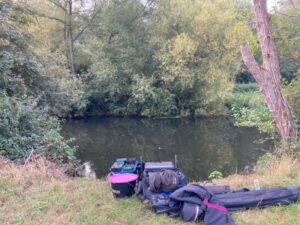 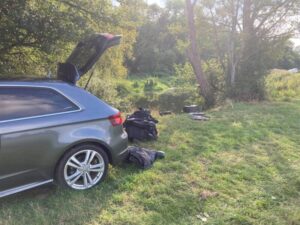 You could park right by your peg

Leading up to this match, I had every intention of balling it in at the start but chickened out and on the whistle, I cupped in four balls containing dead maggots, casters and hemp. I shipped out with single red maggot on the hook and was expecting to catch straight away but my first bite came after several run throughs and nowhere near where I’d fed. It was a nice chunky 2oz roach to get me off the mark. Next put in, I snagged up at the same point and then bumped a fish when the maggot rolled over the hook point.

A dace and a little chublet followed  and then I’ve had a decent spell catching right over the groundbait, mainly roach and small perch. Just before the first hour was up, I hooked a fish that pulled a fair amount of number five Dura Slip out before I netted a lovely roach of 8-10oz. I wasn’t bagging up but it was steady and I was really enjoying myself, with an hour gone I had around 16 fish for probably a pound and a half or so. 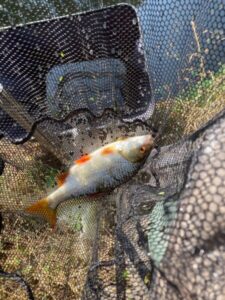 The second hour was similar and I had a nice run of fish on caster including a couple more net roach but then bites slowed right up and I wasn’t sure whether to top up with groundbait or not. I tried double pinkie and hemp but no bites, I shallowed up six inches and had three roach and missed a couple of bites but it was short lived. Adding a section I went further across but no bites so I picked up the shallow rig and first run through the float buried but the result was a tiny minnow sized chublet that wasn’t going to help much!

A couple of bank walkers said it was fishing hard although somebody did have a few bream further up. With no more bites down the middle, I decided to cup in another ball of groundbait and leave it for a bit. I stuck another section on and went across to the cover at 14.5 metres with the shallow rig and started getting the odd little chublet. After half an hour I’d added five or six little fish for a combined weight of 3oz but it was hard work.

For the last half an hour I went back to 11.5 metres with the deep rig and had two roach, a rudd and missed a couple of bites. I finished up with 42 fish which averaging at 2oz apiece would give me 5lb or so. When the scales arrived, the top weight in the section was 5lb 3oz and I was hoping I had a bit more than that but actually only weighed 4lb 13oz and my rubbish estimating skills seem to be going the wrong way! 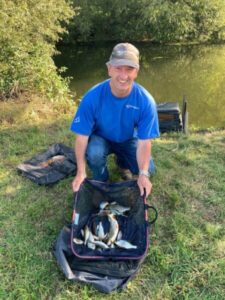 I really enjoyed my first match on the Stour

I didn’t follow the scales as they were driving up through the section in a 4 x 4 so I headed back to pub convinced I was going to miss out by a few ounces yet again. The first person I saw was John Barker who’d had 5lb 1oz and thought he was second in his section. As more people started arriving, it sounded like there was a 23lb of bream and a couple of double figure weights but some of the sections had been tough with 3lb odd winning.

Ian announced the results and along with the top six, there would be two prizes in each section, with second taking home a bucket of goodies from Sonubaits. John actually won his section and Richard Chave was top in his, there were two sections at Sowley, 5lb 3oz was top for pegs 39-48 and then Andy Ankers was called out in second in my section but they didn’t say what weight and then my name was read out and I picked up £50 for the section – well chuffed. 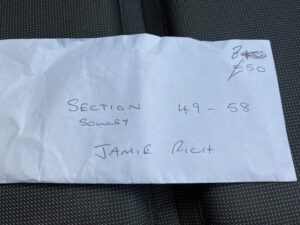 I didn’t manage to get photos of the results but I’m hoping there’ll be something on Facebook and I’ll update this post then, I do know that Ian was third with 11lb something.

It was a superbly organised match on a fantastic stretch of river and I really enjoyed it although it was a long day by the time I got home and sorted all my kit and everything out ready for Bob’s match the following day.

Next up – Bob’s match