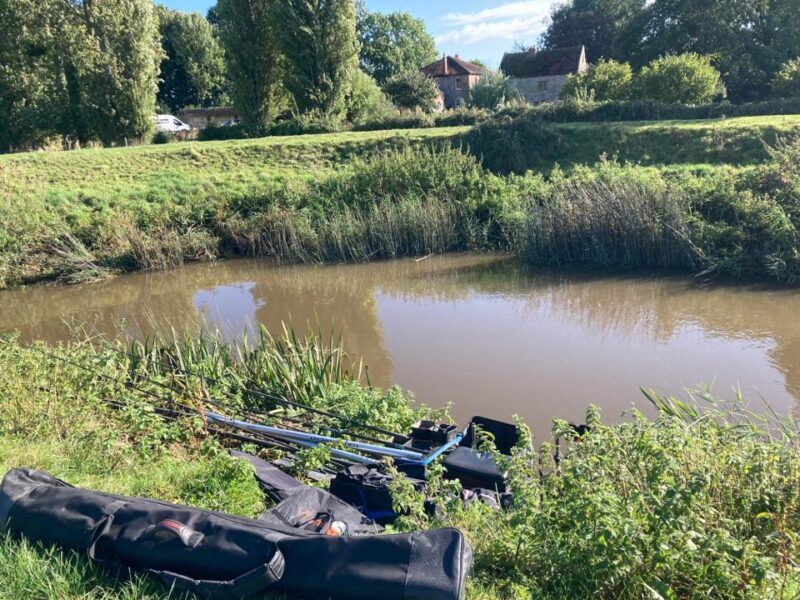 I always look forward to getting back on the river and after winning the league two years ago, I got off to the perfect start last season with section wins in the first two rounds only for Covid to come along and the rest of the series was cancelled. For this year we have some fantastic sponsorship for the series from Haines Angling and Allen & Woodard Building Contractors along with another who would like to remain anonymous so a massive thank you for your support.

With no match secretary, Terry stepped up and said he’d have a go at running it, so fair play to him and along with Rob Cox, Max and Steve Parker, they spent a lot of time clearing swims and walking the river to get things ready for the league opener. It was looking like being popular with nineteen anglers booked in for the first one although with a painfully low and clear river, where to put everyone was proving a headache.

Terry implemented several changes for this year, firstly if the river was flooded the match would be switched to Dillington and still count in the league, which I think is sensible as in previous years, some rounds were rescheduled several times and not all the anglers could make the new dates. The second change was that there would be smaller sections which should mean the league will be a very close run affair, there would also be golden pegs again this year, one quirky new rule was that we could could start feeding our pegs 15 mins before the start and lastly the draw would be done using a random spinning wheel app on his phone.

Typically as we neared the weekend, heavy rain threatened to spoil the party and it was touch and go whether we’d get on the river. Thankfully it eased up Saturday evening and after a pitch inspection in the morning, Terry confirmed the match would go ahead. We met at the bowling club for another excellent breakfast and it was great to see some new faces fishing today including Derek G and Chris N from Stoke along with Les and Bish from Chard.

With everybody assembled, it was time for the draw and ‘The Wheel of Fortune’ would decide our fate. First up were the golden pegs which were 124 and 125. The usual pegs were on my wish list, 14, 120, 125 and 126 although I wouldn’t have minded 129 or 129a. When it was turn, the button was pressed and when the wheel came to a halt, peg 124 was my home for the day (so the golden peg money was safe). I wasn’t too upset as I had the same swim in the corresponding fixture last year and won the section with 9lb 15oz so a repeat performance would be nice!

The river was up and coloured but looked nice and there were quite a few fish topping. I set up a 1 gram bodied float to inch through in the flow and a 0.6 gram DH16 for fishing towards the tail of the swim where is was a bit shallower. On the side tray I had red maggots, casters and Bait-Tech Super Seed hemp. Terry was on 123 and I had Russell ‘The Hitman’ below on 124a with Dave Pope and Rob the next two anglers on 125a and 125 respectively. Phil ‘Digger’ Denslow had drawn Barney’s Bend and was my favourite to win today. 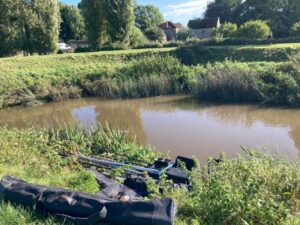 On the whistle I began fishing the top kit to hand in the slacker water, first put in I snagged up and pulled out a rather large willow branch. Next chuck a positive bite resulted in a nice 3oz roach and a couple more followed. Just as I was starting to think I might bag up, the rig kept coming back with streamer weed on the hook. I switched to caster so I could bury the hook and had a nice roach straight away but I was still getting weed problems.

Adding a section and inching the float through I had a few more fish and although it felt like there were a lot of fish in the swim, I couldn’t seem to catch consistently from the same place and was having to chase them around. I shallowed the rig up by six inches to see if that would help avoiding the weed, the float sailed away and I had a lovely net roach of 6oz or so. It was a one off and the pattern for the day seemed to be swapping and changing things around to get bites.

After an hour I had 18 fish (roach and a couple of little dace) for 1lb 8oz but things would need to improve as I was sure double figures would be needed to frame. Several times I’ve laid the rig in and a fish has held it up resulting in a dace, chublet or small roach, picking up the shallower rig, I had another little burst of fish but again it was short lived.

Approaching the half way mark I was still catching quite well but mainly small 1-2oz roach with the odd little chublet, dace and gudgeon (not a single minnow as yet!). Russ phoned and it sounded like it was a similar story for him, having to keep ringing the changes to get bites and he was admitting to a couple of pounds. He said Dave below him had caught a nice chub early on and Rob was getting odd fish on 125.

I was still catching in fits and starts, a few fish from the top of the swim, a couple more inching it through in the flow and then some roach further down the peg, enough bites to keep me interested but not enough to do a good weight. I’d been feeding down the peg in the tail of the swim and with around an hour to go, went down with the lighter rig and had three or four roach quite quickly but it soon died.

Back to the head of the swim with the heavier rig and as so often happens in the last part of the match, it was a bite a chuck and I finished with a flourish. The clicker was saying 76 fish which I thought would average a bit more than an ounce apiece so probably between 7-8lb. Terry wandered down and said he’d caught well and probably had 8-10lb.

I packed up and as I took my kit back to the car, I asked Russ how he’d done and he was admitting to 4.5lb. Rob had the scales so we walked up to start with Terry, his fish went 8lb 8oz and I knew I didn’t have that. Mine went 7lb 1oz and then Russell had less fish but a better stamp for 6lb. Dave P weighed 4lb 12oz which included a nice chub and then Rob had caught well to weigh 8lb 3oz. 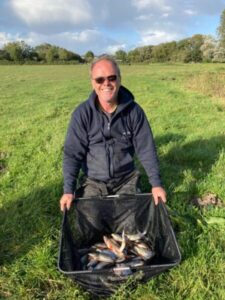 Terry had some nice roach for 8lb 8oz from peg 123 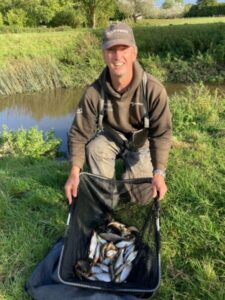 I had lots of fish for 7lb 1oz 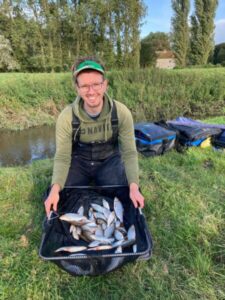 Russ had a nice net of roach for 6lb 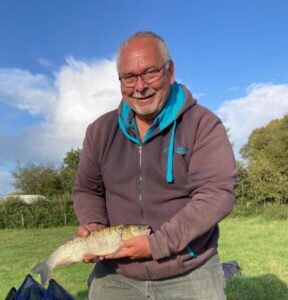 Dave P had a nice chub early on 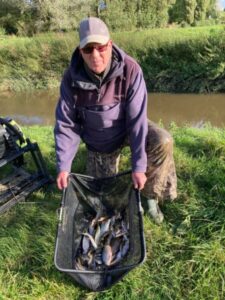 Downstream of the bridge, it had fished quite hard, Digger had 12lb 6oz from 126 but then Les was next with 3lb 7oz from 129a followed by Nick P with 3lb 1oz and Leighton with 3lb. It had also been difficult at Redbridge, Chris Norton having the top weight there with 5lb 4oz from peg 112. There was an unfortunate mix up though with one angler not getting weighed in and chucking back possibly the winning weight.

Back at the results and Coxes had fished well, Parker ‘The Pole’ was top weight with 11lb 15oz from the Tank Traps although he’d packed up half an hour early thinking the match finished at 3:30pm instead of 4:00pm! Neil P was second there with 8lb 9oz from 15 and Bish had 8lb 6oz from peg 17. The anglers at Hambridge had struggled, Frank had 2lb 12oz on H1, Bagger Burton weighed 2lb 1oz (H2) and Danny B had 10oz from H3. Thanks to Neil Purchase for the photo*

So I picked up £20 and two points for my default section win so a decent start to the league although I’m predicting you’ll probably need a near perfect six point score to win the league with the new smaller sections. It had been quite a close match really with only 7oz between the top two and then just 6oz separating the next four weights. I was only 1lb 7oz off framing and I definitely feel my swim was worth that on the day.